10 Instructions for Bidding at Auction

Do you think buying art at an auction is easy?

Well, you are wrong. Artur Ramon, who is an expert in the field, gives you ten basic tips to, at least, not make a fool of yourself in an art auction.

1. Fames should never try to be cronopis.

Many fames-clients think that the job of the antique dealer- cronopis is very easy. They go hunting at the auction and they come out with the piece. The discovery is almost immediate: as if by magic they pull the rabbit out of the hat. And the fames show up and, carried along by this distortion of reality engendered in comparison and arrogance, they dress up as cronopis and do a job which isn’t theirs. They are professional intruders who do not want the cronopis to earn a single cent, because they are as or more clever than we are. The problem is that if we cronopis often make mistakes, it is a lot more likely that they will mess up for the simple reason that they do not yet have an educated eye, or any acquired experience. Pure statistics. 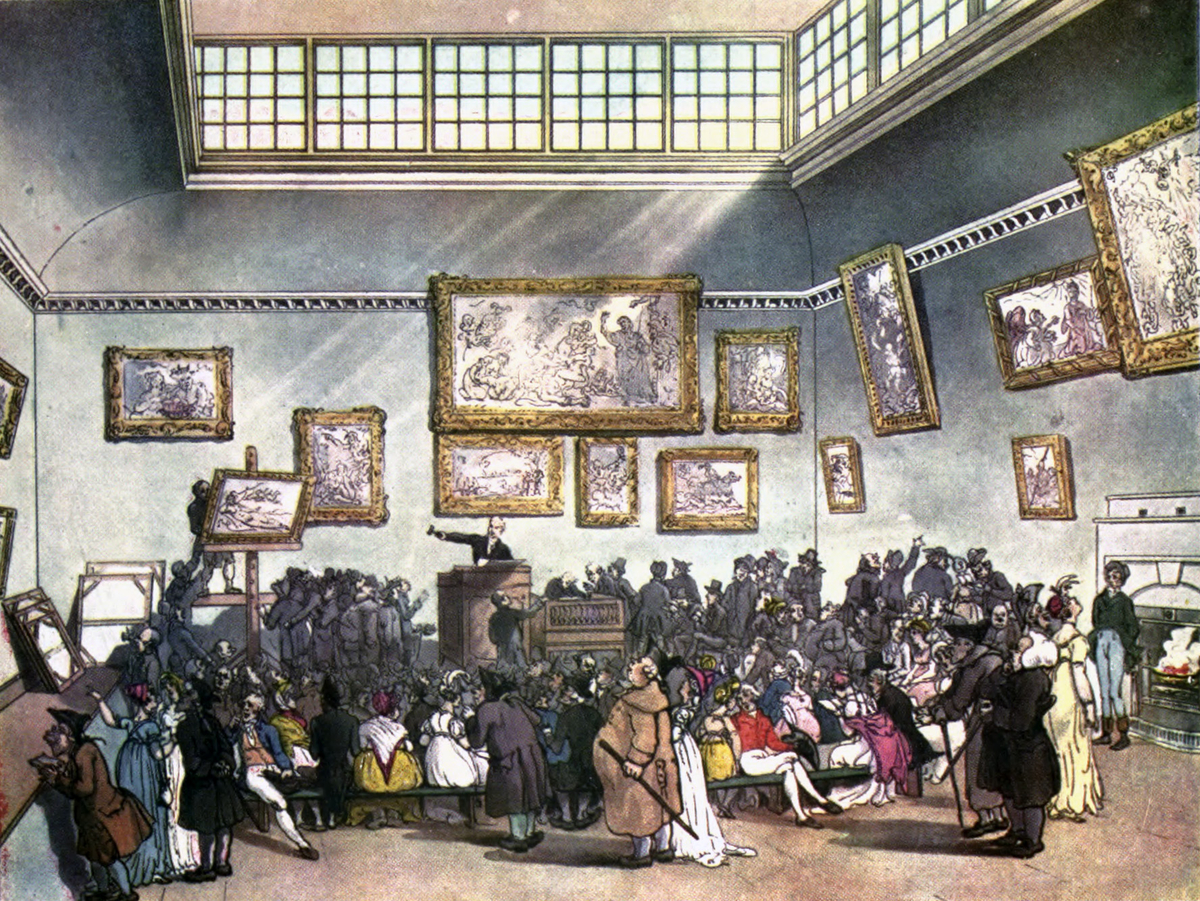 The Microcosm of London (1808), an engraving of Christie’s auction room.

2. Do not mistake desire for reality.

We all dream of finding a Caravaggio lost during the Second World War, or discovering in a dirty portrait of a horseman found in an old house a marvellous Velázquez, or that in a neighbourhood auction a Goya might appear. Make no mistake, it does sometimes happen, with a bit of luck, once you are a cronopi. But much more complicated than that is what happens to the fames.  They buy at auction a painting masked in old varnish thinking that it is a masterpiece, and when it reaches the hands of the restorer it seems that it is either a copy or a fake and they melt like an ice-cream in the summer.  And they deserve to: they should carry on earning their money in banking and the paintings to the cronopis. We live quite well from them, but not as well as the fames.

3. The experts are not gods.

You need to consult the experts, especially those who have spent their whole lives studying an artist and ignore those who certify the entire history of art in exchange for thousands of euros. But the experts are human too, they are not gods.. They were not around when the artist painted the painting and any attribution is an approximation, a suggestion, an idea. It is good to know what they think, but dangerous to have blind faith in them, because they too can make mistakes, carried by the fantasy that enshrouds their own egos. And if you buy and then find out the painting is not worth it, it is you who will have lost out financially and got stuck with the work. They will tend to look the other way, whistling to themselves. There are a lot of visual gurus in our market. More than in other places, valuers of professional prestige. Why? Where there is no visual culture, guides are necessary.

4. Look at the works twice.

My grandfather told me that you should always look at a work twice. If the second time you like the painting the same or more, you should buy it; if you like it less, leave it. It is advisable to apply that criterion to any lot that takes your fancy at auction. Buying a painting is an act of possession guided by love. You need to see things twice, but sometimes you need to pretend you are not because the people who work there are like FBI agents, always spying on you. It happened to me recently. I looked at a painting through a magnifying glass twice and all of a sudden the price went up more than expected. Now I send spies who send me what they see via Facetime, like the Chinese in the Louvre, and so I see through their eyes but at least I am not being used.

Sometimes in Spanish sales there is the curious habit of offering a glass of cava (French champagne is too expensive) when you go in before the auction begins, something which I have never seen in other international auction houses, where you don’t even get a glass of water. It’s better to refuse alcohol, not because you will be breathalysed on leaving but because after drinking you might bid for something you didn’t mean to. You could make a mistake and buy an Alphonsin three-piece suite when you intended to bid for a Persian rug, because you have lost the catalogue. Or you might pay over the odds for something. Better to abstain – the abstemious bidder has more chances of success than the one who is slightly merry.

6. Never sit in the front row.

Is the best place to sit, or even better to stand, at the back of the auction room so that you can get an overall view and see how the sale is unfolding? Much better to use a wide-angled lens than a microscope if you want to see how a sale develops. Bidding is a fast, adrenalin-filled show, like watching a tennis match. Nobody would think of sitting up to the net. It is better to get a view of everything from the royal box from where you can see who is bidding, against whom, who is buying and who is bluffing, and when the moment comes do not raise their hands.

Inexpert bidders begin to bid from the word go, as if they are in a hurry to clinch the sale. An auction is like a psalm, a cadence, not a bellow for all that you want it all to be over and have the piece in your possession. It is better to wait and come in at the end when the doubts start to appear, when the prices are becoming big and round. You look, you understand the rhythm of the sale, you wait  and when the silence of the doubts appears, you bid. Bidding is much like having sex (I refuse to use ridiculous euphemisms or vulgar verbs ) so with age you learn and your timing gets better.

8. Don’t hold your hand up as if calling a cab.

There are some bidders who are either inexpert or egocentric, or both, who bid with great gusto and hand movements. Bidding is not the same as calling a cab. It is a question of raising you pen a little in clear visual communication with the auctioneer and making small movements which will be perfectly understood by the auctioneer but not by anyone else. This is more effective than bursting forth like a handball goalie in the middle of the room. You will be judged on your manner of bidding and everyone will know whether you are a professional cronopi  or an upstart fama.

9. Don’t stand up during bidding.

Those who are not in the know tend to stand up during bidding because they have become bored of the auction. Those of us who trained in the best halls in Mayfair know very well that the time to stand up is in the interval between lots so as to not distract from the sale. It is a simple resource of empathy and fair play which is much appreciated. There is nothing more annoying than having to stand up because somebody wants to come past, and they will never say thank you. It is bad enough having to do so in the cinema or the theatre, or at Camp Nou, but even worse at the most prestigious local, national and international salesrooms.

Applauding at the end of a bidding session is the same as applauding when the aeroplane lands: the epitome of bad taste. Much better to smile discretely (laughing loudly is an unpleasant equivalent of applauding) and look admiringly at Princess Katari who has just bought a Cézanne for the same price as an F-19 stealth fighter. Applauding is a way of demonstrating stupefaction or surprise for something unusual, and the professional cronopis remains unmoved, making out that these things happen every day, that it is something natural, that they are not impressed, basically. We’ll leave the applause to the fames so that they can demonstrate exactly who they are: professional intruders invited into a world that is not theirs.