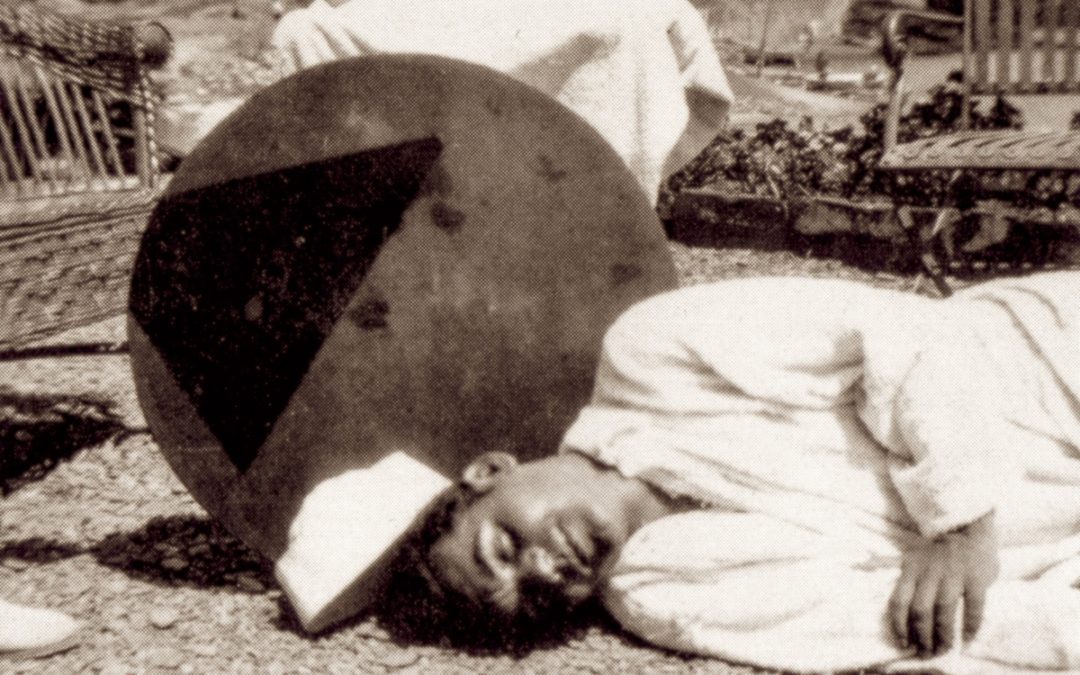 The Dalí painting that flew through the air

A car runs at high speed through the Alps. There is no time to lose. The travelers want to get home in Turin as soon as possible to enjoy the unique jewel they bought: one of the masterpieces Salvador Dalí’s youth phase. However, the painting will not reach its final destination in its best conditions.

The work was titled Natura morta. Invitació a la son [Still Life. Invitation to Dream] and it was painted in 1926. With it, the painter wanted to pay homage to the best friend in his youth, Federico García Lorca, at the time a young literary promise who had not yet achieved the successes that would make him one of the greatest poets of the 20th century. They had met a little earlier at La Residencia de Estudiantes [The Student’s Residence] in Madrid and that meeting marked them forever, influencing each other, something that has been studied in detail especially by Rafael Santos Torroella and Ian Gibson. 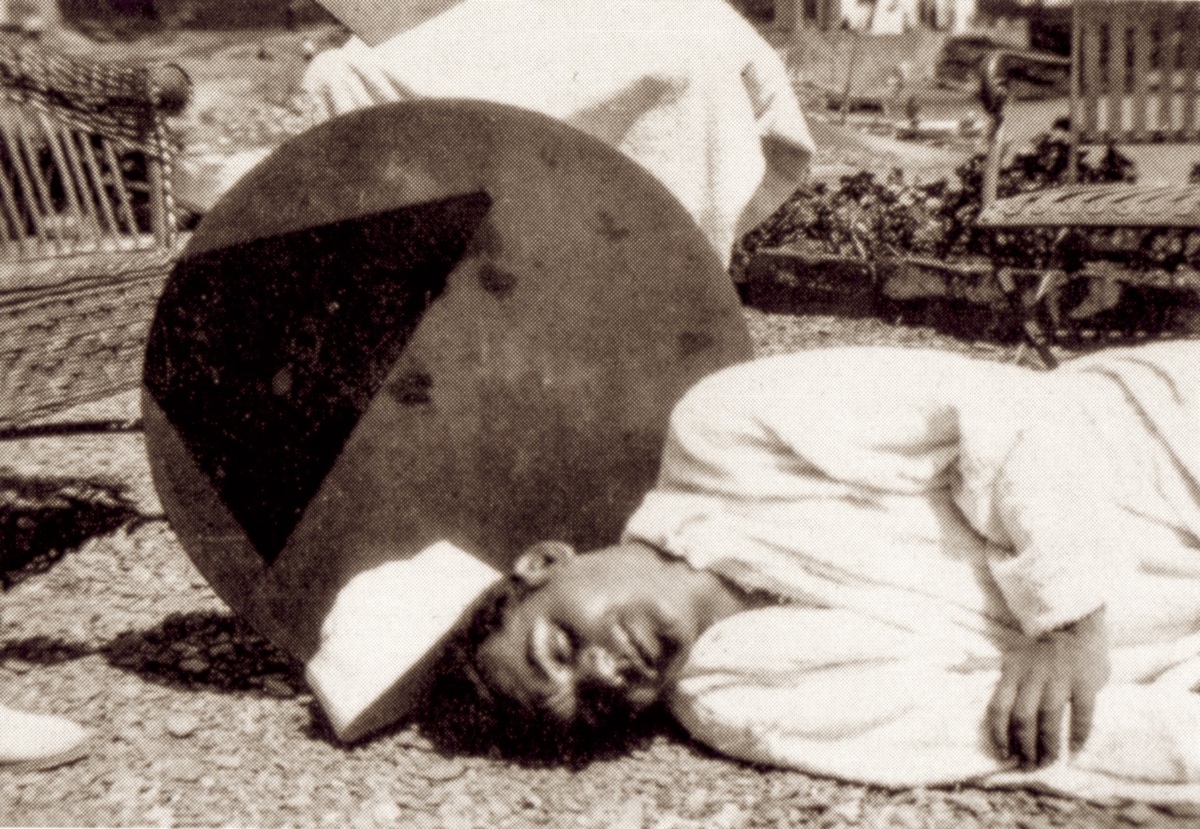 The front of the painting depicts a large portrait of Lorca with closed eyes, the invitation to the dream the title tells us about. It is one of the many games practiced in the Residence by the man from Granada: representing his own death. The poet, as some of his friends would remember, tried to recreate everything: from the careful placement of his lifeless body in the coffin, through the coffin walk through the cobbled streets of Granada, to the final decomposition of the corpse in his grave. It was his particular way of making fun of what he feared so much. In 1925, during his first stay in Cadaqués invited by the painter, Lorca brought that game to the Dalí’s house next to the Es Llané beach. In her book, Els Dalí de Figueres. La família, l’Empordà i l’art, the historian Mariona Seguranyes, recovers several images of that fun that accompanied Lorca and the Dalí siblings, Salvador and Anna Maria. The latter was who fortunately, captured all with her camera. A document that today we can define as essential. One of those photographs was indeed the basis for the painting Still Life. Invitation to Dream without having to have the model posing.

The poet’s head is fused with what appears to be a full moon, a more dreamlike reading of the funeral game. But this is where we perceive the genius of the young Dalí, who takes as a reference a table on the nightstand of the family home, appropriately overturned on the floor to create this effect. We know that thanks, precisely, to the photograph taken by Anna Maria and that the poet must have liked a lot. So much that he took them with him, in 1929, to New York, perhaps to remember those happy days in Cadaqués. Lorca gave them to the editor Ángel Flores who published them in the issue number 3 of the New York magazine Alhambra, in August of that year. 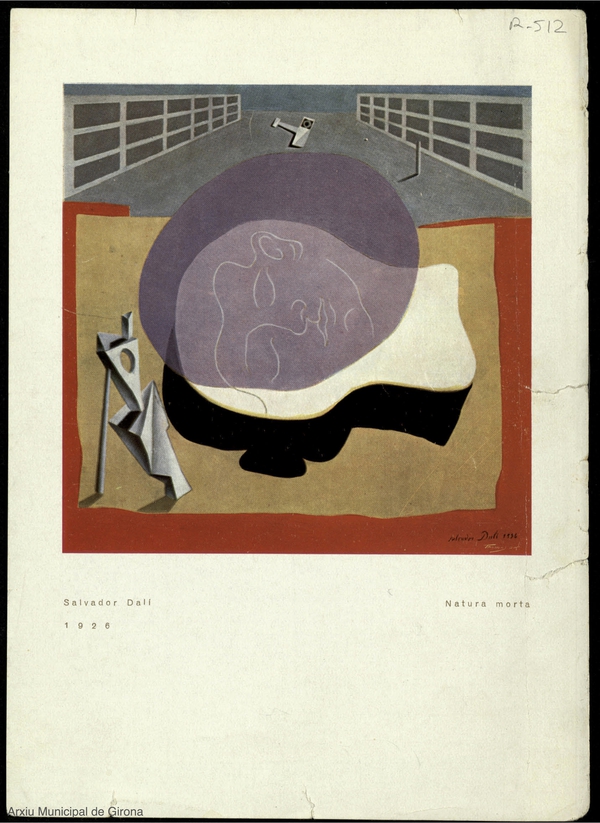 Catalog of Dalí’s exhibition at Galeries Dalmau, with the reproduction of Still Life. Invitation to the Dream. Santos Torroella Collection. Girona Municipal Archive.

The painting was exhibited in the emblematic Dalmau Galleries in Barcelona, where it was part of the important exhibition dedicated to the Dalinian production of that time that took place from December 31st, 1926 to January 14th, 1927. Its price was 700 pesetas and did not attract any collectors. It was the dealer Josep Dalmau who ended up keeping that canvas of almost one meter by one meter (39 by 39 inches).

But this story started with a car at full speed. It is driven by a peculiar Italian collector named Giuseppe Albaretto and has become a noisy admirer of Dalí in the 1960s. Together with his wife Mara, they have invested a lot of money in the Empordà painter, commissioning him illustrations for editions of classics such as The Thousand and One Nights or The Odyssey. For Dalí, it is easy money because they are works that in most cases -they are almost always watercolors- he performs quickly, just to meet the requirement. Once the volume is finished and printed, the Albarettos keep the originals. For Salvador Dalí and his wife Gala, these collectors are also someone to turn to when there is a problem. For example, when Gala breaks her relationship with a boy named William Rothlein, they will be in charge of buying the passionate love letters from the young man to avoid the scandal of their publication in the press.

Thanks to the art critic Rafael Santos Torroella, the Albarettos know the main gallery owners and collectors in Catalonia that may have Dalí’s work available. This is how they find out that Josep Dalmau’s widow keeps a first-rate piece in Barcelona: Still Life. Invitation to Dream. For Giuseppe and Mara, it is the way of acquiring one of the main works of the young Dalí, without betraying the artist who has forbidden them to buy anything from Anna Maria Dalí, depository of paintings and drawings of the twenties.

The Albarettos pay for the painting and place it in the roof of their car. It was Santos Torroella himself who explained to me in detail, years ago, that the work was poorly wrapped and, in the Alps, with great wind as an enemy, the painting flew. The Albarettos were slow to realize that what they had bought was no longer in the car. When they recovered it, the canvas had suffered very severe damage, some irreversible. What remained of the composition was taken to Turin, where attempts to save it were made in the Salesian workshop. Santos Torroella provided them with the only image of Still Life. Invitation to Dream, available until then. It came from the catalog of the Dalmau exhibition in 1926-1927. The lost parts were repainted and the torn was sewn, although the art critic admitted to the author of these lines that he was not very satisfied with the final result.

Precisely that final result ended up decorating the halls of the Albarettos residence in Turin along with Dalinian compositions such as Christ of Vallès or Twist, in addition to others on which doubts regarding their authenticity has been raised. The collectors decided not to show the painting publicly and even refused to lend it for the exhibition about Dalí and architecture held in La Pedrera in 1996. However, in that year it was part of “La vita è sogno”, an exhibition in Turin where a good part of the Albaretto collection could be seen. There, Still Life. Invitation to Dream appeared in full bright color, almost as if it had been recently restored. 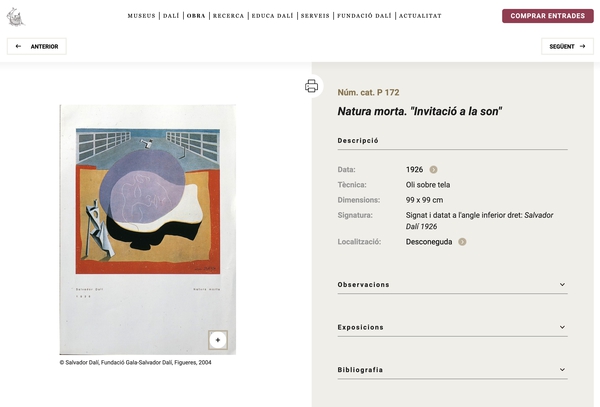 Caption of the catalogue raisonné of paintings by Salvador Dalí, with the Still Life. Invitation to Dream entry.

When at the beginning of this century the Fundació Gala-Salvador Dalí was finally able to study and endorse what was kept by the Albarettos, some of their works were destroyed because they were considered as not executed by the artist’s hand. Regarding the painting that concerns us, the Dalinian institution decided to register it as in “unknown location”. This, because touch-up after touch-up, Dalí’s original pigments had been vanishing.

But with the Albarettos there are always unexpected script twists. In the best line of a tangle movie, the painting arrived in New York in the spring of 2012 to be part of an auction at Sotheby’s. It was supported by a certificate of authenticity from Nicolas Descharnes, but without the backing of by Fundació Gala-Salvador Dalí. Sotheby’s was very careful not to name the Albarettos in the catalog and wrongly indicated on their entry that it was the property of the descendant of a Japanese collector who had acquired the canvas in 1969. It was not true. What is certain is that its starting price was $400,000 dollars. On May 3rd, 2012, someone paid $ 1,010,500 dollars plus the auction house’s commission. It is not known if the anonymous owner got to know about that peculiar Albaretto’s car trip. In the catalog raisonné of the foundation it is still under the label of “unknown location”.