Abelló-Dalí – a tale of friendship

The Abelló Museum in Mollet del Vallès is one of the artistic treasures that you have to rediscover from time to time. It is constructed around a pretty interesting figure: the painter and collector Joan Abelló i Prat (Mollet del Vallès, 1922-Barcelona, 2008).

Abelló brought together over 10,000 pieces, among them Picassos, Dalís, Mirós, Sauras and Sorollas. But perhaps the most interesting works were those pertaining to the great names in Catalan art which, at the time of their acquisition, were not considered to be of great value. For example, when in the 1960s Abelló approached the widow of the sculptor Manolo Hugué, he was already a half-forgotten figure in the world of art. Currently, the “Manolos” collection in the Abelló Museum is one of the most important in Catalonia. 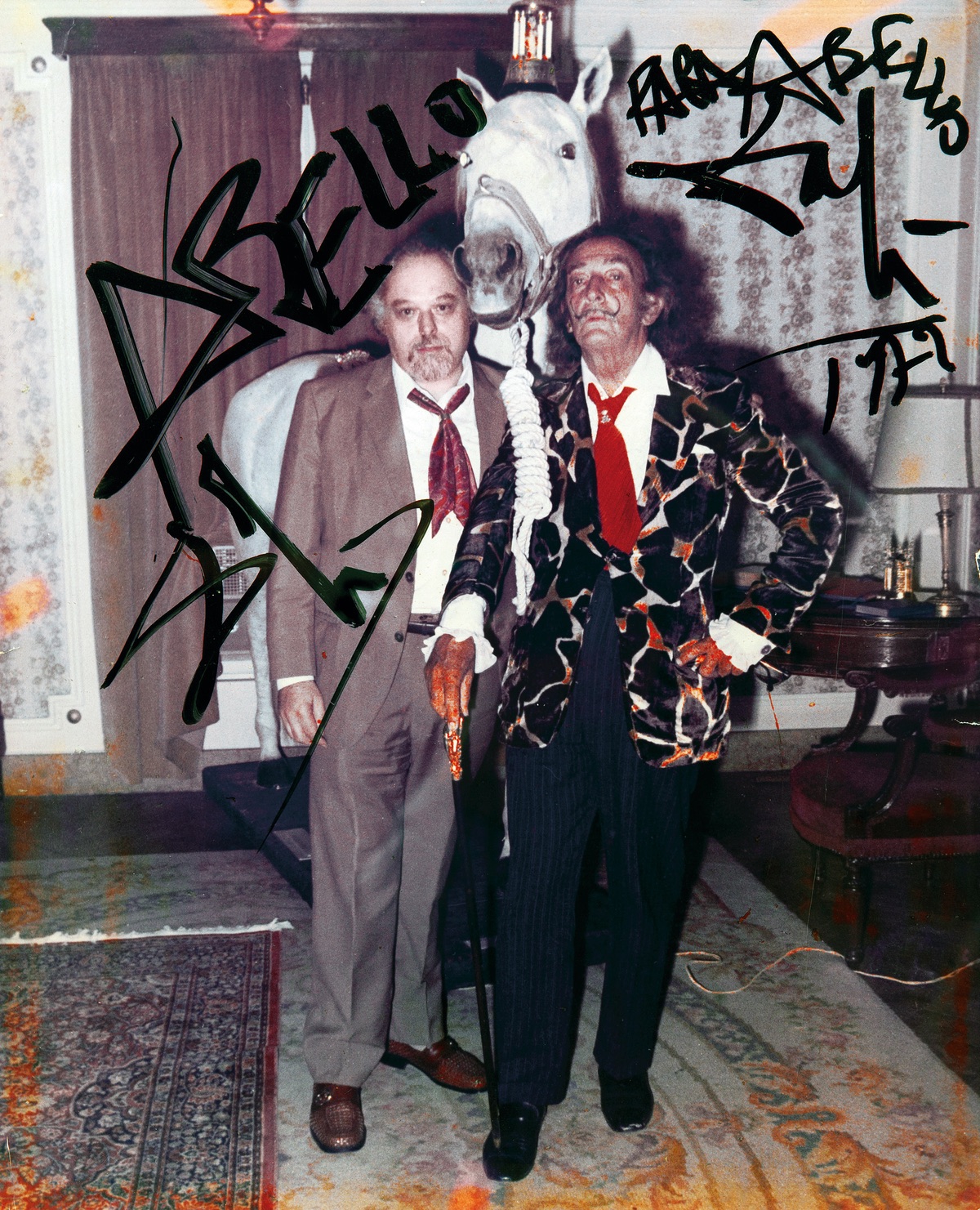 Photograph dedicated to Joan Abelló by Dalí, in the bedroom of the Ritz Hotel where the stuffed horse given by Abelló to Dalí was installed.

Abelló was not a wealthy man, but he was enthusiastic and had a great sense of striking a good deal. That is how he managed to expand his collection with big names in Catalan art such as Marià Fortuny, Joaquim Mir, Isidre Nonell, Modest Cuixart and Antoni Tàpies.

And it was precisely thanks to Marià Fortuny that Abelló was able to become friends with one of the most universally recognised Catalan artists. In 1965, while listening to the radio, he heard an interview with Dalí in which he declared his love for the works of Fortuny.

In 1962 Dalí had painted and exhibited in the Saló del Tinell his own particular version of the Battle of Tetuan. Abelló had a sketch of the Battle…by Fortuny which the artist from Reus had made around 1860 during his first trip to Morocco. 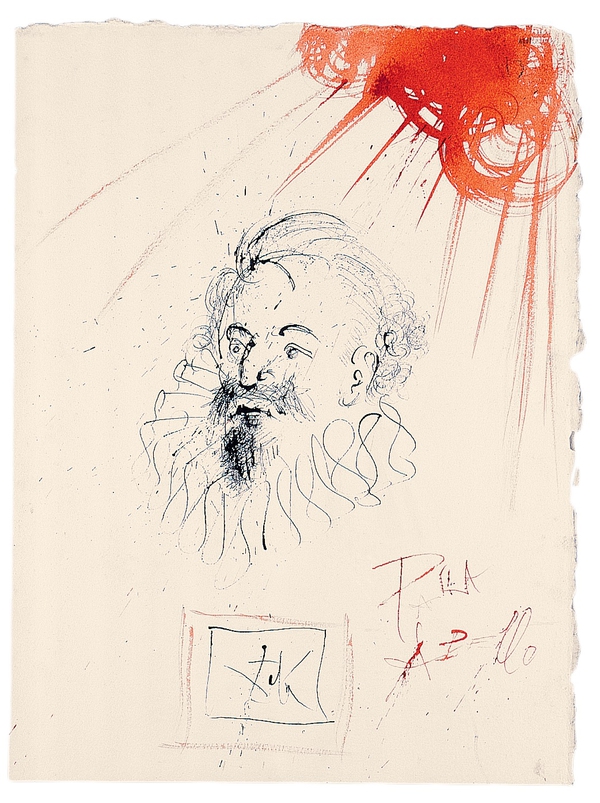 Without thinking twice he went straight to Portlligat where he found Dalí sunbathing. He introduced himself and presented Dalí with the sketch. Dalí told him to come back the next day and returned the favour with an ink portrait of Abelló with a “Cervantes”-style collar.

From that moment on Abelló became a collector of Dalí’s art and the supplier of some of his most capricious demands: a stuffed horse or a giraffe, a two-metre paintbrush, etc.

Abelló acquired some of the pieces directly from Dalí but most of all he would feed from the youthful writings that were in the possession of Dalí’s sister, Anna Maria. The Dalí collection in the Abelló Museum is composed of an early oil painting Landscape of Cap de Creus (c. 1918), several drawings dedicated to him from 1965 to 1973, numbered ceramics, graphic work and a major collection of manuscripts dated pre-1928.

Everyone wanted to open a museum, and both Dalí and Abelló did so “in their own way”.

From among those manuscripts we can highlight two extensive fragments of stories: Summer Evenings (c. 1920) and The Great Maria (c. 1926), an extremely interesting notebook about his work from 1918 to 1922; Doodles. Essays on painting. Catalogue of Paintings with Notes (1922), and the originals of articles published in magazines such as La Gaseta de les Arts and L’Amic de les Arts. As well as poems, there are essays on artistic theory and letters from Dalí to his contemporaries such as J. V. Foix, Federico García Lorca, Joan Xirau, Juan Vicens and his uncle Anselm Domènech; and there were also letters sent to Dalí by  Sebastià Gasch, Luis Buñuel and Joan Subias. Many of these manuscripts contain drawings and sketches. 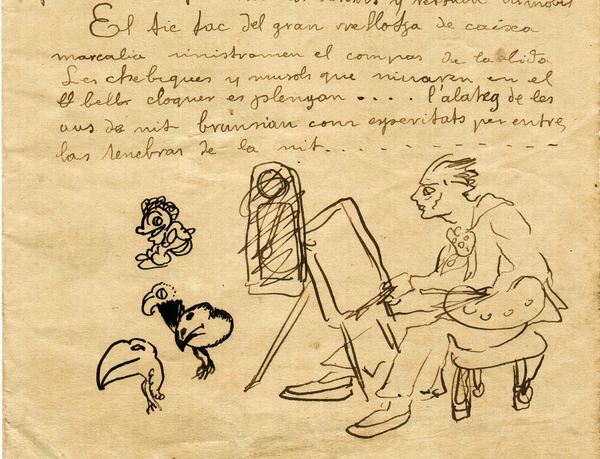 Dalí and Abelló had a common goal. They both wanted to open a museum. And they both did so “in their own way”. In the case of Abelló, he bought and refurbished adjacent houses in his native Mollet, thereby managing to construct his own Museum-House-Maze in which he showed anyone who was interested the 10,000 works of his collection, a true cabinet of curiosities. In 1999 the pieces became part of the Abelló Museum ­­– Municipal Art Foundation, hosted in a different building which was more appropriate to their museographical needs in the centre of Mollet.

One of the best-known contributions by Abelló to Dalí was made in July 1971. Dalí wanted to give his wife Gala a white horse as a gift. Abelló, wanting to please the artist, contacted the owner of the Monumental bullring, Pedro Balañá. He bought a white horse and took it to the slaughterhouse in Terrassa. The taxidermist Joaquim Jover Roig then embalmed it without removing its internal organs. 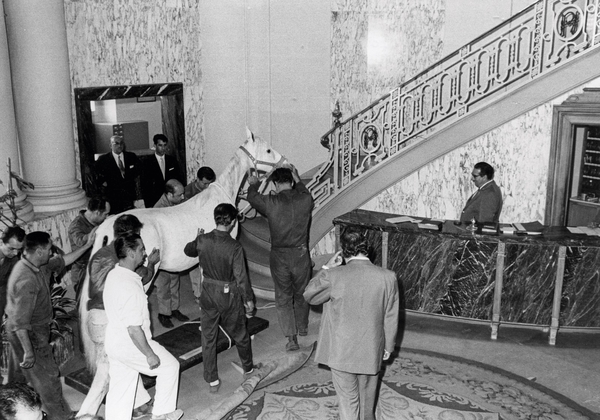 Workers with the stuffed horse in the foyer of the Ritz Hotel, 1971.

Why did he leave the organs inside? Because the commission had to be done in a hurry. There wasn’t time. Dalí had hired a suite on the fifth floor of the Ritz Hotel (the most exclusive in Barcelona) in which to place the horse. But with its organs intact the horse weighed 300 kilos and didn’t fit in the lift and it had to be carried up the stairs by a team of hotel workers who almost fainted from exhaustion. The following day the equestrian-Dalían spectacle appeared in a number of national and international newspapers. Dalí, proud of it, christened the horse “Rocibaquinante”, in memory of Babieca the horse of El Cid and Rocinante which was Quixote’s horse. It is now housed in the Gala Salvador Galí Castle Museum in Púbol. 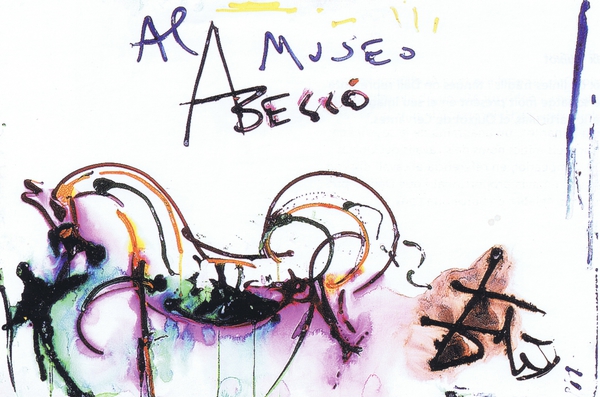 In thanks, Dalí gave Joan Abelló a poster project for his future museum.

The Abelló Museum, in Mollet del Vallès, can be visited until October on Thursday and Friday afternoons, Saturdays and Sunday mornings.