Angoulême, the capital of comic

In this world there is a city almost as unreal as The Invisible Cities as described by Italo Calvino.

It is a city where the two most central streets, which lead onto the City Council building, do not have the name of any pedestal politician, victorious military officer, supposedly glorious battle or any other memorable historical event, which would be normal – or at least would have been in the Ancien Régime. No, they bear the names of a comic strip artist and a comic strip writer. Comic or BD, bande-dessinée. This city is called Angoulême and the streets are Rue Hergé and Rue Goscinny. In addition, there are street numbers that are not inscribed in a normal box, but in a bulle or speech bubble.

The artist of The Adventures of Tintin and the writer of Asterix  and a good part of Morris’s Lucky Luke series, among others, deserve the highest honours in this city, located in the Nouvelle-Aquitaine region of France. And this fact alone, this gesture of full recognition of the value of an art which is underrated in many other parts,  will put a smile on the face of any comic-lover.

From 1974 to the present (and hopefully the future too) each winter at the end of January, Angoulême has hosted a Comic Fair (later to become known as a Festival) which in just a few years became one of the biggest in Europe, along with that in Lucca, Italy.

The event always had the support and presence of the best authors. Hugo Pratt designed the first poster, André Franquin was the first to receive the Grand Prix, but it was the presence of Hergé in 1977 that really gave a major boost to the fair, which was the initiative of just a few people (Groux, Mardikian, Pierre Pascal) in a city far from the Capital. In France, centralism is occasionally compensated for by a series of festivals outside Paris: the Cannes Film Festival, the Theatre Festival of Avignon, the Photography Festival in Arles. The last Angoulême Festival was number 46. And possibly the most glorious one was in 1989, when two memorable exhibitions dedicated to Hergé and Franquin coincided, with original drawings, sketches and the odd trace of a pentimento, as it should be. 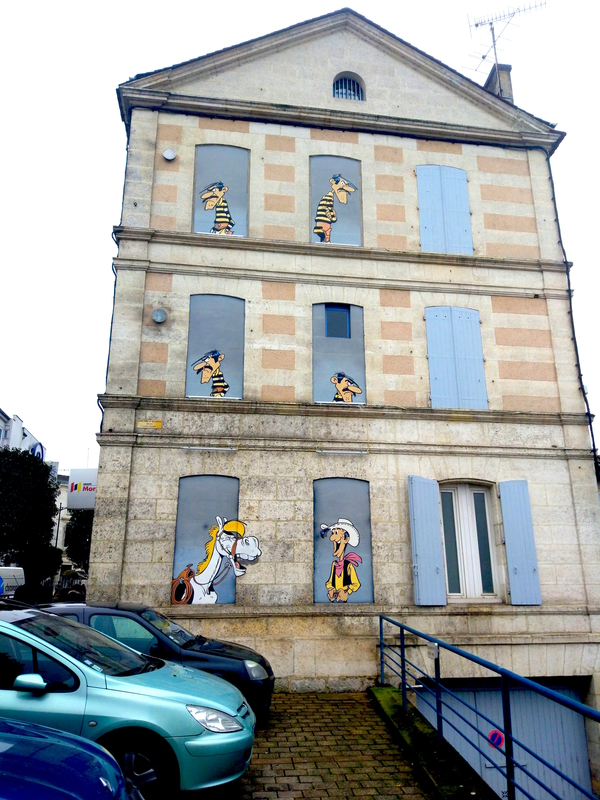 In Angoulême, love for the ninth art (the eighth being photography even though it appeared before the cinema) is expressed in a range of different ways. During the festival the city, which normally has a population of almost 50,000, is literally invaded by the comic. For a few days, children and teenagers sit around on public benches reading the comic strips or visiting the stands at the fair, instead of learning to subtract or calculate square roots. They are accompanied by teachers who want to see what is new but also have to keep an eye on them. Then you go out into the street and suddenly a bus passes, it is painted with versions of characters by Franquin, Uderzo and Morris drawn by Zep. In the maison de la presse the news seller tells you that this Thursday he is going to sell hundreds of copies of the daily Libération, in a special annual edition, illustrated exclusively by comic artists, including the cover page. This year included a strip by Willem about the ambitious extermination projects of the Brazilian neofascist president that was absolutely spot on.

Then you go to have lunch or dinner at a certain restaurant and instead of a tablecloth there is a large paper cloth and a pile of markers so that you can draw to your heart’s content while you are waiting for your starter. The obsession with drawing is well known in this trade. The image I have of Robert Crumb in Angoulême in the mid-1980s is one of a blokes who barely spoke but never stopped drawing on any surface that remotely appeared to be paper. Faced with people like that – talented and compulsive – the best thing to do is to offer the appropriate materials. Then, the drawing stays in the restaurant or the author takes it with them. There is also freedom for this. While the waiters clear the tables they can contemplate the beautifully executed tablecloth drawings. 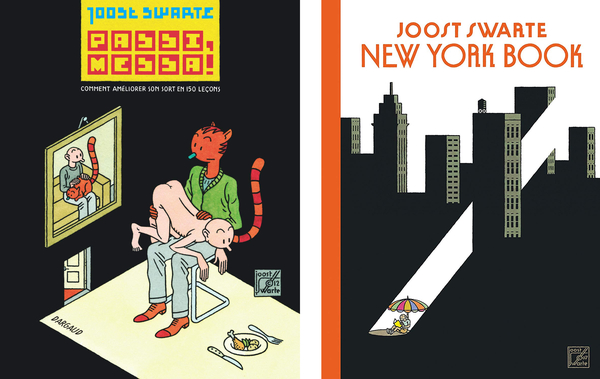 Being a city with a smallish historical centre, in Angoulême the artists, writers and publishers do not disappear off into different bars as happens in the Barcelona trade fairs. So it is not surprising when the person at the next table or sitting beside you at the bar is one of the best comic artists in the world.  Someone like Lorenzo Mattotti or Joost Swarte, for example. This year, Swarte finally presented the complete edition of Passi, Messa!, and there was also recently a wonderful compilation of his drawings in The New Yorker. In Angoulême you will find some of your favourite artists and writers without having to make an appointment. In the 1980s this would be in the Café de la Paix, and after that excellent source of Calvados closed down, the same has been the case in any of the bars in the centre. At night and between drinks, conversations tend to be much more fun and deep than in a purely professional context.

Once the festival is over, it seems that this friendly invasion has not been a fleeting one. Walking through the city at any time of the year you can see more than twenty buildings whose side walls or façades have become huge murals of comic strips, book covers or popular characters. Public art in Angoulême is not a question of imported sculptures or graffiti. This city is different, distinctive. This trend began in 1982 with an enormous Hommage à la Bande Dessinée by pop painter Erró, and it has gone on from there with mural versions of most of the best comic artists in the French-speaking area, from different generations and genres. For example, shafts of galactic light drawn by Philippe Druillet, which rhyme graphically with the stripes of the zebra crossing. 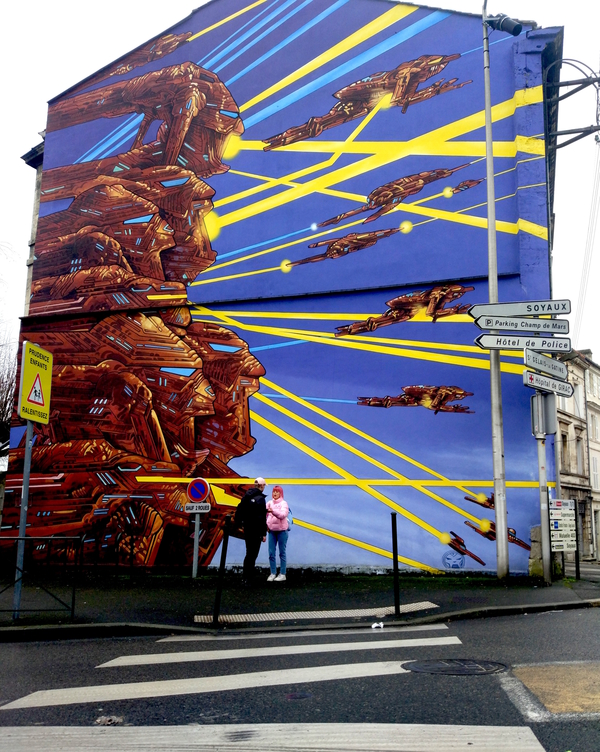 Not far away, above the dark entrance to a car park, a surrealist forest rises up, drawn by François Boucq. 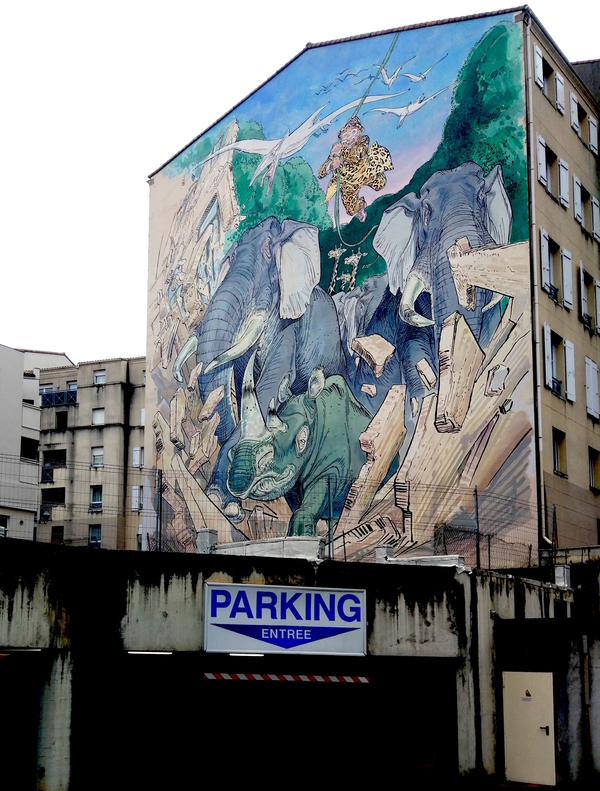 On another building, Boule & Bill, characters by Roba, swing in a minimalist space in which the lack of figures contrasts with the proliferation of funny little creatures by Florence Cestac (yes, women can draw comics too!). Close to a cold pool there is a beach scene drawn by Loustal. On some of the bricked-up windows there are characters like Gaston Lagaffe and the Dalton Brothers, not far from Lucky Luke. And sometimes the drawing fits in with the building itself. The provincial archive is wrapped in a huge drawing of the metaphysical files of Schuiten and Peeters. 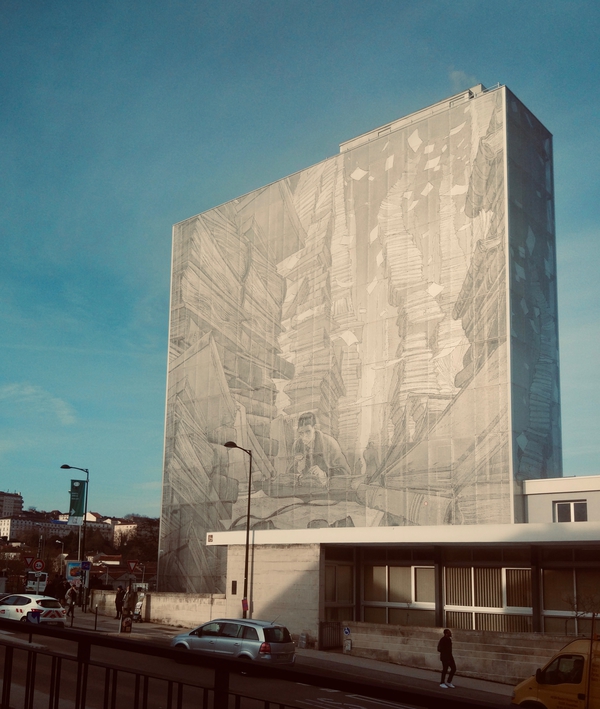 Apart from that, in any corner or shopfront you can find traces of the love for the illustrated narrative that exists in the French-speaking capital of comic. The mascot of Angoulême is a little beast (fauve) drawn by Lewis Trondheim. 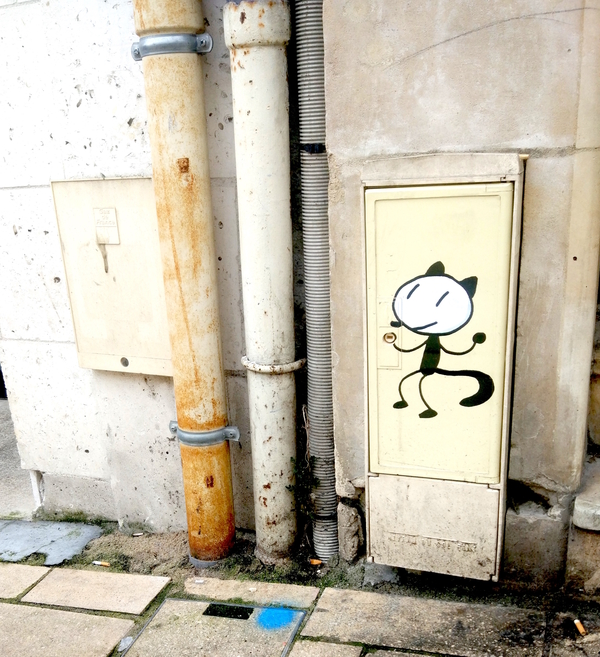 In 1984 I went to Angoulême for the first time and it just so happened that that year the French minister for culture Jack Lang, announced the creation of a museum dedicated to comic, which was a pioneer in that genre. Now it is an institutional tradition that the French minister for culture attends the event every year, something which doesn’t happen in other countries. Also, in 1984 the Joan Miró Foundation was a pioneer internationally when it organised a large exhibition dedicated to comic, an art which up until then had been generally ignored by museums around the world. The exhibition, which I co-curated with the designer Peret, was an international homage to Hergé. We proposed it when Hergé was still alive, but it wasn’t accepted until after his death. It is curious to note now, 35 years later, that the last four books by Charles Burns feature a kind of grim-looking Tintin, a nightmare version. And Burns’ last book, entitled Vortex, is a derivation of the first drawing full of mutant pseudotintins which he made especially for the Barcelona exhibition. I asked him for it by phone from the Joan Miró Foundation and until then Burns had not yet published any kind of version (or perversion) of Hergé’s character.

Tintin continues to inspire other works, some of them interesting such as the anticolonialist (per)version Pappa in Afrika, by Anton Kannemeyer. It is a kind of back-handed criticism of Tintin in the Congo, the worst book by the creator of such masterpieces as Tintin in Tibet. 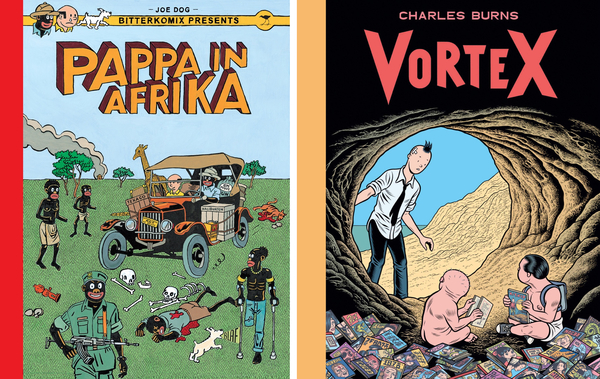 In the new Musée de la Bande Dessinée, re-located on the north bank of the River Charente, you can see temporary exhibitions (this year, for example, there is a show dedicated to the publisher Futuropolis) and different presentations from the collection. This winter the semi-permanent show includes a copy of the first ever comic strip. Although the American always insist that they invented the comic, in the museum in Angoulême you can see  Monsieur Jabot, a story by Swiss artist Rodolphe Töpffer which was published in French in 1833, long before the appearance of The Yellow Kid (1895). Goethe loved Töpffer’s cartoon and clearly was able to see by intuition the possibilities of this new means of expression. The dialogues weren’t in speech bubbles but then neither is it in quite a few modern comics.

In the main hall of the museum there are some quotes from different artists. This one, for example:

There are also equally eulogistic phrases by Federico Fellini, Balthus and others.

The Angoulême Festival has always been visited by many comic amateurs and professionals from Catalonia and the Basque Country especially, but also from other parts of Spain. It is, then, shocking to see the lack of attention over almost half a century towards the southern neighbour. It would seem that France has not realised that places like Barcelona, Valencia, Vitoria, Mallorca and Madrid have been producing and publishing for decades works just as brilliant as the best of the French, English or Japanese comics which have been exhibited and awarded prizes. If they ever discover Guillem Cifré,  Antoni Calonge or Micharmut, it will be posthumously.

The problem is that Martí is from Barcelona, not American or French.

In the 2019 Festival two Spanish authors, Keko and Altarriba, presented works recently translated into French. And it was a nice surprise to see that thirty years later, a major publisher has discovered one of the best comic artists in Barcelona. Cornelius has just published a splendid edition of Docteur Vertigo by Martí Riera, which was presented alongside his previous book Taxista. In the French edition the prologue which I wrote for the original publication of Taxista is replaced by an equally eulogistic text by Art Spiegelman, the author of Maus. These two books by Martí are exhibited together with well-known works by Daniel Clowes and Charles Burns, who are his American counterparts. In the 1980s Martí Riera drew fictitious stories which anticipated tone which appears in the films of the Coen brothers. The problem is that Martí is from Barcelona, not American or French.

Only in countries that function relatively well there is the necessary, essential support, for the pioneering and avantgarde initiatives, which are always the most difficult. That is probably why we do not have a good Museum of Comic Art in Catalonia. A cultural capital only works if the necessary personal initiatives for the community can also count on a certain institutional and social complicity which allow them to develop and maintain continuity.