ARCOmadrid. The artists, the doll and his “subjects”

As a mirror of the current situation, ARCOmadrid – the biggest contemporary art fair in Spain – has opened its doors with the sinister doll of Felipe VI which dominates “his subjects” and the general public from a height of over 4 metres.

Paraphrasing the poet, something smells fishy in Spain, and maybe for that reason he is sprayed several times a day with his favourite cologne.

Beyond the controversy the piece by Santiago Sierra and Ivan Merino caused in the Italian Prometeo Gallery (a controversy of the type that will appear in the media under one heading or the other) ARCO has begun to turn like a well-oiled machine. No sooner had it opened its pavilions, which for the first two days are only open to collectors and professionals, and Polígrafa had already sold an etching by Plensa for 30,000 euros, which just goes to show that criticism and the market in the work of Plensa do not seem to go hand in hand. After the first waves of activity the Catalan galleries in general seemed happy: lots of visitors, lots of interest and lots of people with their wallets out in spite of the fact that the market still seems far from making a complete recovery. “We have found a clean fair with large spaces and a higher level of quality every year. Buyers are coming with a clear idea of what they want to purchase and not just to see what they find”, says Miguel Marcos, breaking from his conversation with Carlos Cuadro, director of the Niemeyer Centre in Avilés which is exhibiting its large collection of Joan Brossa’s work until the end of May. 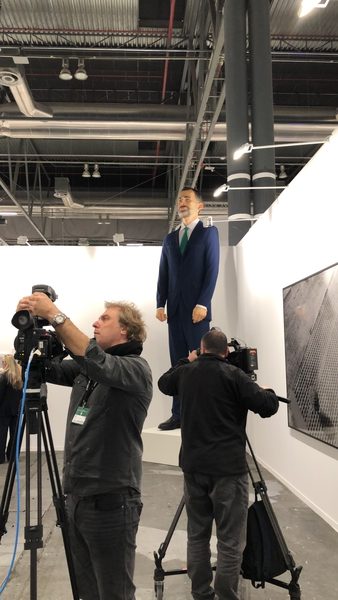 Alongside the presence of the Marlborough and NoguerasBlanchard which are also based in Madrid, once again this year there are 16 Catalan galleries: ADN, Ana Mas Projects, Àngels Barcelona, Espai Tactel, etHALL, Joan Prats, Marc Domènech, Mayoral, Miguel Marcos, Polígrafa, Senda, ProjecteSD, RocioSantaCruz and Bombon Projects, the only newcomer, which is participating in the Opening section of young galleries under seven years old. All together the galleries and their artists are like a mirror, in this case of the panorama of contemporary creation which is seen in ARCO: painting, photography and sculpture/objects in that order. “Video has practically disappeared” complains Han Nefkens, a specialised collector in the discipline, who is presenting the work of their prizewinning artist Maya Watanabe in La Casa Encendida. 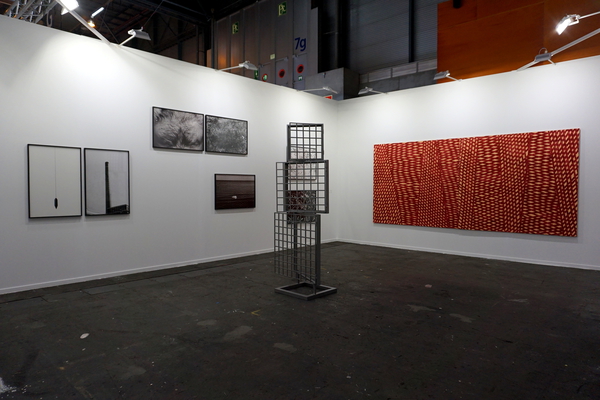 Among the few videos that remain is one which forms part of a tryptic (video, score and trumpet) called Helikon. It is a project by Fito Conesa who defines it as “an apocalyptic musical journey in the mines of the Union”. It is exhibited in the Espai Tactel which now also has a base in Barcelona, together with the Toormix design group and Patricia Carrasco. Another project which includes animation and has a fascinating story behind it is Martín Vitaliti’s project for etHALL. It is an investigation into comic and the concept of ‘original’ and ‘publication’ and is very revealing. He deconstructs what defines the “logic of distortion” and shows how comics are modified, his own intervention in the modifications, and the zero control the artists have over their work.

The Franco Foundation boasted of having banned the artist from the fair.

ADN went ahead and brought Iván Merino to the fair, despite the fact that following scandal of Franco in the fridge, which was an unfortunate premonitory of the resurgence of the most foul and dangerous right wing, the Franco Foundation boasted of having banned the artist from the fair. Well, not only has he not been banned but he is represented in two galleries. A more subtle but equally forceful work is the anti-war allegory by Antoni Miralda, which shows from the walls of the Senda Gallery how the little soldiers are contaminating monuments, public spaces and urban furniture. They are Lilliputian compared to Felipe, but equally scary. These photographs from the Soldats Soldés series are all vintage copies taken by Miralda in Paris. They were developed in black and white between 1965 and 1973 and have remained unseen in his studio until now, when his parody of the mythology of violence and the patriotic architypes is more necessary than ever.

There is also photography in the RocioSantaCruz stand, in a discovery of a terrific couple of artists, Palmira Puig-Giró y Marcel Giró. The gallery has also expanded and managed to get an excellent space for Arts Libris, the international artists’ book and contemporary art publications fair, which was created in Barcelona in 2009 and this year it includes 34 exhibitors, ten of which are from Barcelona.

NoguerasBlanchard and Àngels Barcelona Gallery have brought some of their fetish artists, Leandro Erlic and Ruben Grilo, and Esther Ferrer and Joan Foncuberta, respectively. Large format works by José María Sicilia dominate Marc Domenech and Joan Prats, while Joaquím Chancho’s work can be seen in the stand of Ana Mas Projects, accompanied by photos by Àngels Ribé, an artist which in the collective imagination in a symbol of the 1970s but who continues to produce interesting photographs. Next year ARCO will have a new director, Maribel López, who will co-direct the event with Carlos Urroz in his ninth and final fair. On Friday the Councillor for Culture of the Catalan Government Laura Borràs will visit the fair – a customary visit which was only prevented from taking place last year as a result of the application of Article 155 by the Spanish government.