Berga i Boada: sex and violence

There are very few occasions on which an astute researcher recovers an unknown masterpiece, and even more rare is it to rescue an artist from oblivion, make them known and much better understood as if they were a completely new, unexpected and fascinating artist, and one who nobody up until now had really known or understood.

This is precisely what Javi Palomo, the curator of the exhibition Josep Berga i Boada. The awakening of things and the sleeping, has done with this artist who until now has been considered minor and negligible but who, in fact, has shown himself to be one of the most interesting and significant Catalan creators of the turn of the nineteenth century – a period which the specialists tend to call, as a matter of course, Catalan modernism. 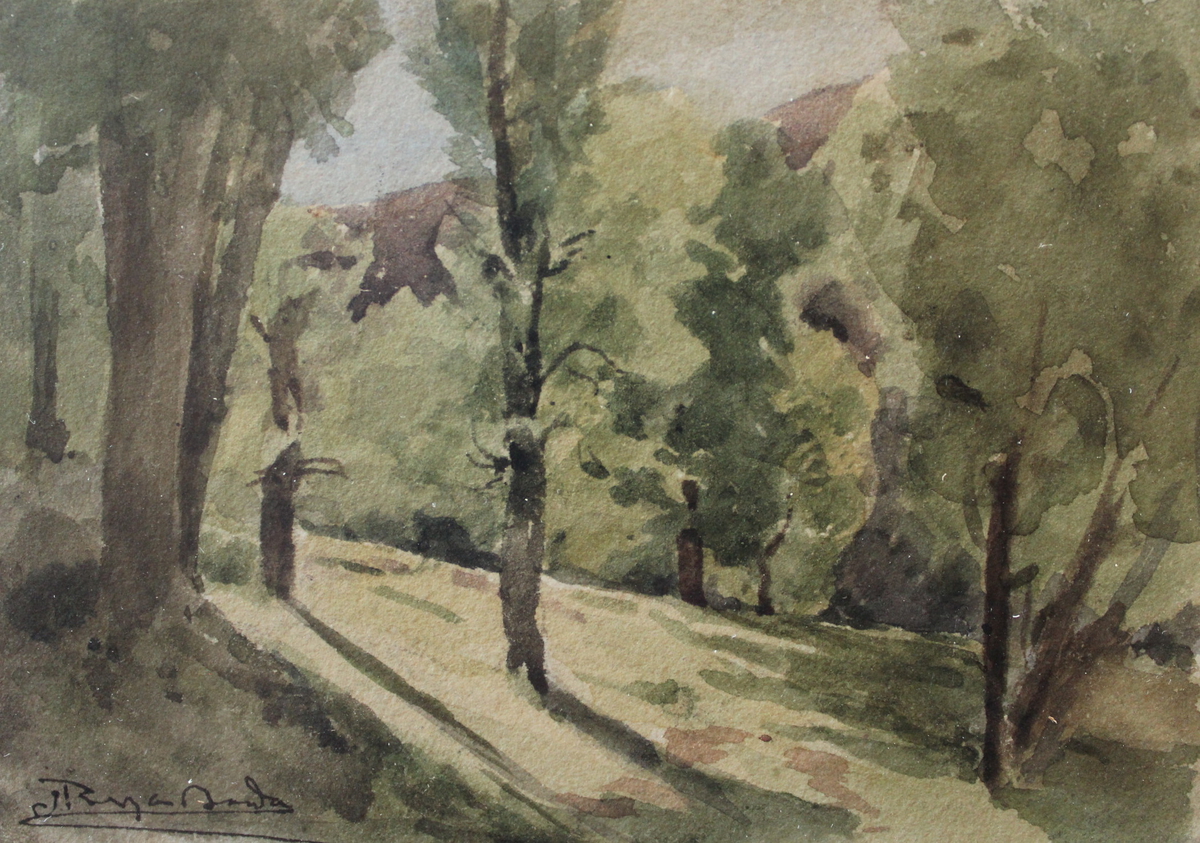 An extraordinary illustrator, a great draughtsman and sculptor, and a mediocre painter, Josep Berga i Boada (1872-1923) was the son and disciple of the well-known landscape painter Josep Berga i Boix, “Grandad Berga”, the founder of what has been abusively referred to as the School of Olot. The young Berga had nothing to do with this school, if it ever existed, that is, beyond the bourgeois decorativism and industrial aesthetic of the workshop for religious imagery, Christian Art.

Berga i Boada is a creator who is completely separated from the pictorial tradition of La Garrotxa, and specifically, from the passion for the landscape, convinced like many of his contemporaries that true nature worthy of any interest in human nature much more than plants and minerals. He was closer to the anatomical interest of his friend, the sculptor Miquel Blay, and the impressionist, portraiture and expressivity of the human figure by Ramon Casas. 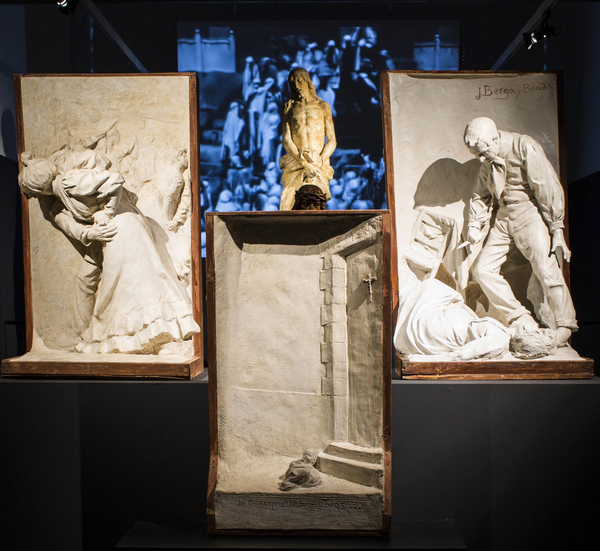 Josep Berga Junior constructs a solid work while elaborating a public personality which was very frequent at that time – that of the idealist and subjective artist, bohemian, unadapted and individualist, experiencer of all the pleasures of the body and a fan of the most radical and destructive subversions. In particular, art for art’s sake.

Berga i Boada transmits the splendour of the tensed body, the face of the prostitutes which he tirelessly reproduces at a certain instant of absolute grace

In a way which was perfectly coherent with what was happening in France, if Berga i Boix subscribed to the tradition of popular landscapism of the Barbizon school, Berga i Boada, were seduced by much more contemporary models that were more coherent with their personal and artistic objectives, and especially by the impressionism of Claude Monet and what we could call the impressionist-influenced realism, in the model of transgression produced by Gustave Courbet. In the drawing and canvases of Berga i Boada, we find an exercise in genuine discrepancy and dissidence with respect to the tradition model represented in his father’s painting. 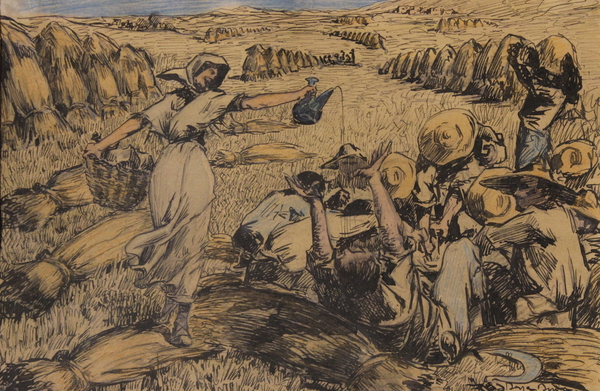 Where previously there had been the landscape as the absolute protagonist, now we find an insistent centrality of the human figure in its daily surroundings. Where previously there was a hypothetical calm and indeterminate time, imprecise and dormant, geographical and natural, and only conditioned by the light of the sun and filter of the clouds, now we had a fleeting, unrepeatable, subjective moment, like a photograph, an impression, an impacting vision, wide awake, which only the artist was able to see and only the artist could reproduce. 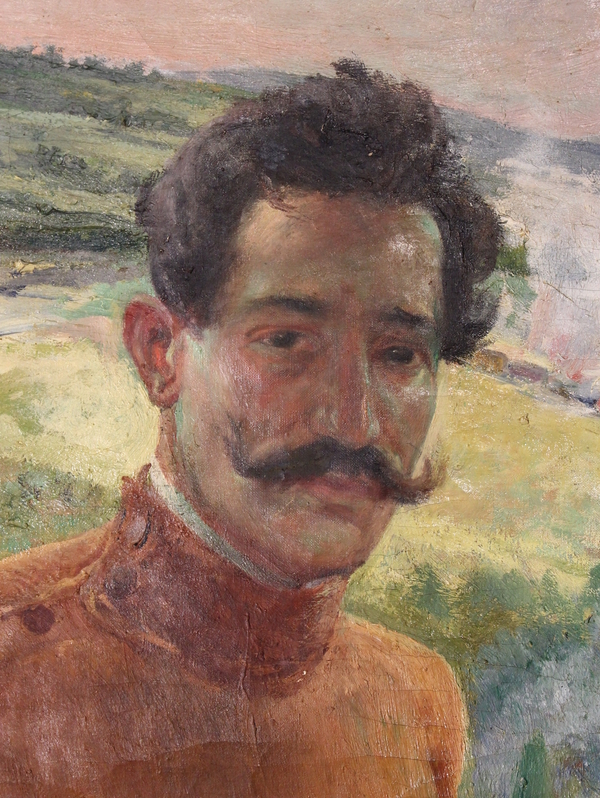 If Courbet made a meticulous portrait of a splendid vulva L’origine du monde, almost like a mountain valley covered in vegetation and documentary truth, Berga i Boada transmits the splendour of the tensed body, the face of the prostitutes which he tirelessly reproduces at a certain instant of absolute grace, of genuine human and psychological revelation, and a true celebration of the mystery of existence. What the artist wants to do is to give ultimate importance to the moment, the movement, the pulse of life through unrepeatable scenes or situation which are stimulating for their very undeniable veracity.

The brushstrokes or sketch lines are energetic, and the colour is always vivid or full of a multitude of shades in the monochrome drawings. It is hard to look without enthusiasm and a sense of gratitude at the ink drawing La mosca, from 1910, which was a preparatory work for La mosca of 1918, the final drawing made with a broad pencil, which reproduces the exact moment a horsefly bites an ox in his most nether region, and how in turn he causes an impressive stampede of the herd. 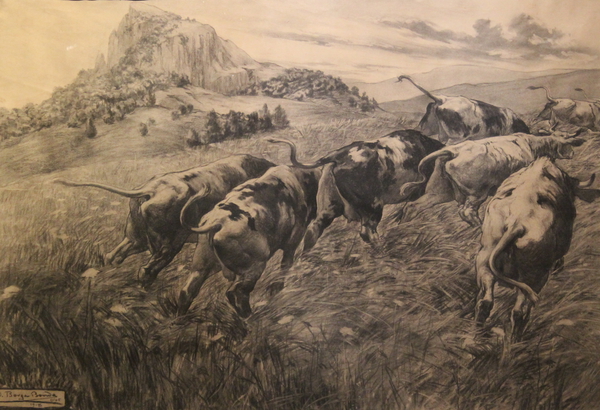 There is a whole complex series of solid anatomical knowledge and great drawing technique at play in this faux costumbrist or insignificant work. At first glance it may seem to be a simple rural scene, when in fact it is a burst of rebellion, an instinctive kick against the universe in the face of misfortune, the exact news of the interior life of the modern individual, trapped between libido and violence, just as the great rebel of his time Sigmund Freud pointed out. Berga i Boada’s La mosca appears to illustrate the famous anecdote by Pierre-Auguste Renoir who, when asked whether he painted with his head or with his heart, solemnly replied “Non, mes couilles”. 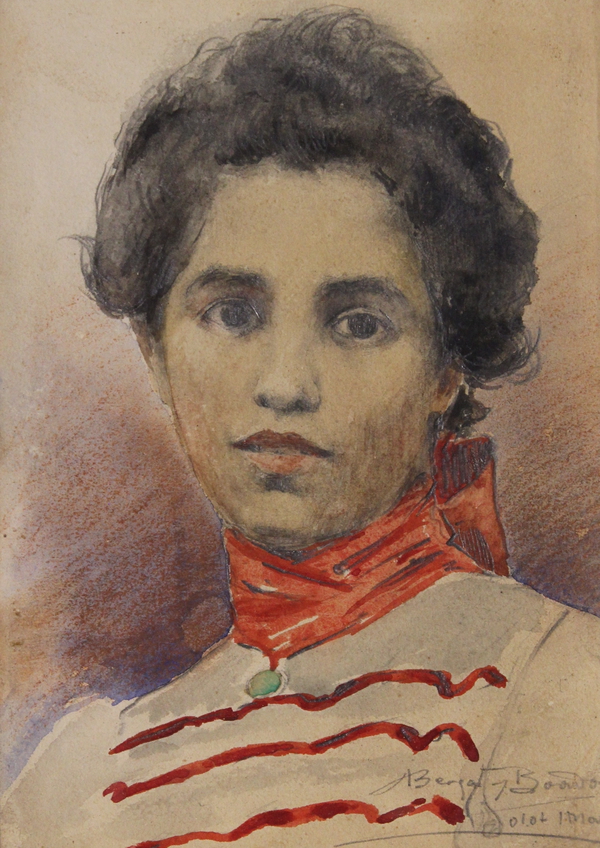 In Berga i Boada there is a non-conformist, malcontentedly untamed and radical view. The same view that led him to make an excellent life size painting representing the components of his own family – including his father and mother – as a malicious homage to an institution which in fact rejected and horrified him. Berga i Boada, who lived for most of his life either alone or in brothels, has an especially malicious way of painting the faces of his central figures. They are true to life and technically brilliant, but nevertheless reproduced with an undeniable desire for revenge, for ironic criticism.

You only have to compare them with the extraordinary collection of illustrations published during the Great War, with the anatomical beauty and crude annihilation of Eros and Thanatos, where the principle of life and death complement each other in such a painfully strange but at the same time completely compatible manner. This is where hatred lives alongside love and vice versa, where violence and barbarity reign.

That same impression, the same harshness, is confirmed in the sculptures that appear in the excellent exhibition that Palomo has organised and mapped for us in the Museum of La Garrotxa. In particular, the sculptures of Christ as Ecce Homo, with a great formal beauty, anatomically impeccable and realistic, endearing, with an impressive sense of majestic divinity, totally flagellated, destroyed by the pain of passion, by man’s thirst for evil that has been inflicted on him, with no qualms.

A closer look at the work of Berga i Boada shows a lot of masochism and sadism, a lot of sex and violence. It is so categoric, so authentic, so little idealistic and with its feet so firmly on the ground that it reminds one especially of the great literary work of the Olot valleys. Only in La punyalada (The stabbing) by Marian Vayreda can we find such a faithful and uncompromised portrait of what the world is really made of. This is an exact portrait which conceals the opulent natural, paradisiacal beauty of La Garrotxa. It is the tree of good and evil or, what amounts to the same, the knowledge and disgrace for those who eat of its fruit.

The exhibition Josep Berga i Boada. The awakening of things and the sleeping can be seen at the Museum of La Garrotxa in Olot until 10 February 2019.