Brushstrokes of the Opera

The Liceu opens this new season with the last opera by Bellini, I Puritani, considered by many critics and musicologists to be his best work. This is an openly romantic work set in distant seventeenth century Scotland. Although the libretto mentions Plymouth Castle in south-east England, forget that harbour town and imagine a Scottish castle in the full throes of the English Civil War between Cromwell’s Roundheads and the King’s Cavaliers: the perfect setting for a beautiful love story with a happy ending.

For the staging of this opera it is not enough just to have a great production and a fantastic cast, you need an excellent tenor and an extraordinary soprano. The tenor’s famous High D-flat and the unsingable High F (both off the stave) have to be heard to be believed. There are very few tenors who achieve them without ending up in A&E! 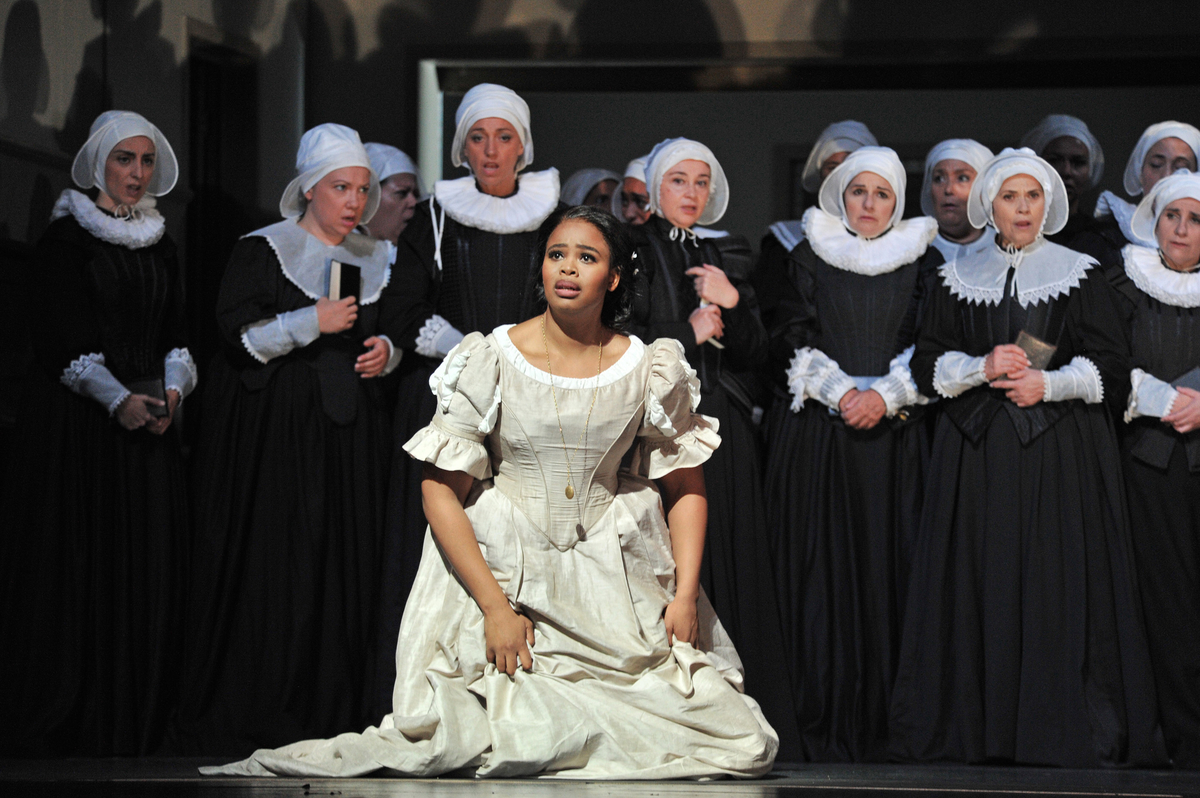 Pretti Yende and the Choir of the Liceu. Photo: A. Bofill.

At the Liceu two exquisite casts alternate: the first headed by Javier Camarena, one of the most sought-after voices of our time, who sings almost without a break in the very best opera houses in the world. At his side is Pretty Yende, a South African soprano whose name is on everyone’s lips and who has made her place among the five best lyric colorata sopranos. Next to them are Celso Albelo and Maria José Moreno, two of the Liceu’s resident artists and much loved by the Barcelona audiences.

The production at the Gran Teatre del Liceu includes a change to the ending and sets the opera in the thick of the religious conflict in Belfast in 1974. We see how Elvira’s madness takes us back to the seventeenth century and then returns us to the twentieth. This is a very daring production of an opera which can have different readings.

An exhibition “From the Inside”: Des de dins

Whoever goes to see I Puritani can also enjoy the exhibition in the theatre’s Foyer Balcony. This time it is the artwork of the one of the people who work at the Liceu – Fernando Jiménez, also known as Sacris. Sacris (Barcelona, 1969) is in charge of the material and has spent 17 years in the wings of the Liceu.

Sacris, Effects of the imagination.

As he watches the rehearsals and performances from the darkness of the back stage, Sacris makes sketches which he later turns into “unfinished” works in oil.

This exhibition, entitled “Des de dins”, allows us to see Sacris’ colleagues, especially the members of the choir, hard at work in the middle of the productions. Many of the regulars of the Liceu will easily recognise recent productions such as Macbeth, Carmen and Rigoletto. Sacris invites us to discover life on the stage. Like Schubert’s 8th – the famous “unfinished” symphony – the inner scents that these oil paintings exude set us before scenes which are inaccessible to the public, whether they are seated in the stalls or the gods.

The Friends of the Liceu also welcome the new season

Since its foundation thirty years ago, the Friends of the Liceu organisation has always celebrated the beginning of the season. Each year it presents a publication with illustrations by great contemporary artists such as Josep Guinovart, Luis Gordillo and Carmen Calvo. This year the chosen illustrators are Brigitte Szenczi and Juan Antonio Mañas, an artistic duo who paint separately but always exhibit together.

Their work is modern-day Baroque, recreated with precise realism and references to metaphysics and philosophy.

Each of the ten operas of the 2018-2019 season is illustrated with three images. In each of these oils on paper the essence of each title can be appreciated: Szenczi and Mañas have captured the magic that every composer wants to transmit with their music and offer it to us directly. Even if you don’t know the titles of the works that they have illustrated, you will be able to imagine the scene and the music. You won’t have to read the plot summary – just take a careful look at the images.

Of course, you don’t need to be a member of the Friends of the Liceu to enjoy these works. They are exhibited at the Sala Parés, just five minutes’ walk from the opera house until 11 November.