Dalí under the genius of Raphael

In 50 Secrets of Magic Craftmanship Dalí writes that a painting has reached its definitive state when you can imagine it “in the course of a protracted dream, hung in a museum alongside your favourite Raphaels”.

Well, this little miracle has been realised thanks to the temporary loan of Raphael’s Madonna of the Rose (1517) by the Prado Museum, which will be hung next to The Ascension of Saint Cecilia (ca. 1955), by Dalí. 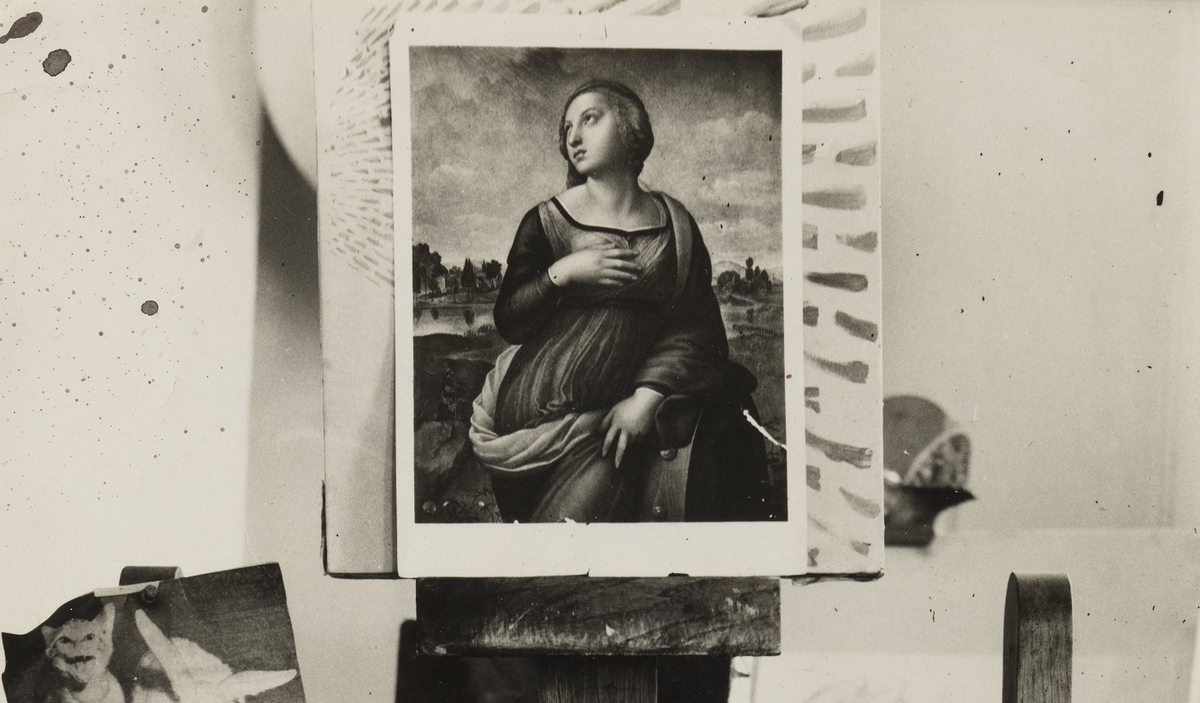 Picture of Raphael’s Saint Catherine of Alexandria, 1506-1507, in Dalí’s studio.

The exhibition Dalí-Raphael, a Protracted Dream, curated by Montse Aguer, offers abundant documentary material on Dalí’s admiration for the Renaissance painter, as well as on the creative process of his own Saint Cecilia. In this oil painting, the saint disintegrates – or rather is recovered – behind a cloud made up of semicircles, emulating the rhino horns which for Dalí represented a perfect logarithmic curve. Underneath, Dalí makes reference to the dry stone of the Cap de Creus landscape. He took inspiration for the work in Raphael’s Saint Catherine of Alexandria (1506-1507), which is in the National Gallery in London.

In this exhibition there is also a drawing of the face of Saint Cecilia, with a background grid which Dalí used to keep in proportion the perspective which was so important to him and closely linked to the beauty and mysticism that were keys in the works of the Renaissance artists. 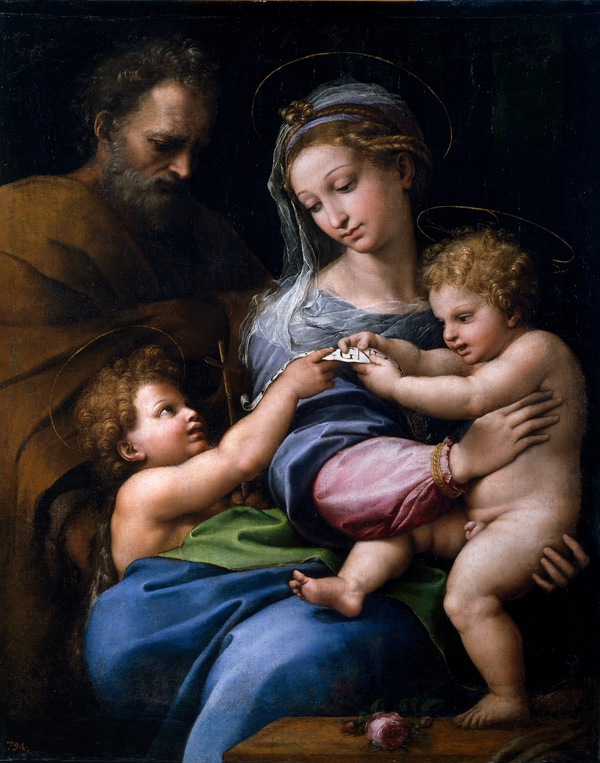 Dalí’s initial admiration for Raphael’s work began with The Masterpieces of Raphael, published by Gowans Grey, London in 1906 and he returned to it later when the book Raphael was published by Hyperion in New York in 1941.

In fact, Dalí had already expressed his admiration for the work of the painter d’Urbino in Self-portrait with Raphaelesque Neck, from approximately 1921; and he explains in The Secret Life how at the beginning he consciously imitated features of the Raphael’s personality, intimately related to melancholy which, as conceived by Marsilio Ficino and Giorgio Vasari, was the light of the genius: “I had let my hair grow and wore it long like a girl, and looking at myself in the mirror, I often adopted the postures and melancholy aspect of Raphael, who I would habe like to look like more than anyone”.

We know from Anna Maria Dalí that her brother had a reproduction of the Madonna della seggiola by Raphael at the head of his bed. And he would later remember in an interview that d’Urbino had been present in his expulsion from the Academy of Fine Arts of San Fernando, when he declared the evaluating panel incompetent since he knew more about Raphael than the three professors put together.

In the exhibition there is a large collage of photographs from the studios in Portlligat and Monterrey, showing the painter working surrounded by reproductions of works by Raphael, such as the Madonna del cardellino or Madonna of the Goldfinch, or the Deposition, but there are also works by Vermeer with The Lacemaker and Velázquez with the portrait of Margaret Theresa of Austria. This was the ranking that Dalí envisioned in his 50 Magic Secrets, also present in the show, in which only Vermeer supersedes the score of Raphael, who is followed closely by Velazquez.

The director of the Prado Museum, Miguel Falomir, who was present at the opening, highlighted the admiration that Dalí felt for Raphael, alongside Velázquez and Bosch, when he visited the Prado in the mid-twenties, and how in his Dali News, published in New York, he said it was the best museum in the world.

As Montse Aguer explains, Dalí wanted his own museum to become a space for dialogue among artists. Another dream come true: the day of the opening there was a round-table with the participation of Aguer, the director of the Prado, the patron of the Òscar Tusquets Foundation, and the painter Antonio López. According to López, Dalí was imprudent and had neither a sense of fear or a sense of guilt, and it was this which enabled him to go down in to the sewers of humanity and come face to face with the dark zone. Something he hammered home by saying “any work of Dalí’s contains the whole history of humanity”.

The exhibition is complemented by a special dossier, Salvador Dalí, Raphael, which is posted on the website of the Foundation, coordinated by the Centre for Dalian Studies with a series of articles, quotations by Dalí, documentary material and a tour through the works in the catalogue of works by Dalí with a Raphaelesque inspiration.

The exhibition Dalí/Raphael, a Protracted Dream can be seen at the Teatre-Museu Dalí, in Figueres, until December 2019.