From Hyperactivity to Contemplation

In Germany a series of educational-type adverts are enjoying great success. They pay homage to the heroes of 2020. The people speaking are old but in 2020 they were in the prime of their lives.

There is the neighbourhood loafer, the couple who spend all day in bed, the videogame addict who only realises there is a pandemic one month after it has been declared. All of them remember that winter of 2020 when just by staying at home, by doing the thing they had always been criticised for, they became heroes.

Agustín Parejo School. Por fabor estamos parados, 1987 Adaptation of an original edition in the form of a postcard. Photo: @ArteEdadSilicio.

Perhaps the pandemic has forced us even more to put the brakes on, to remove ourselves from the frenetic hyperactivity that has been exponentially multiplying in recent decades, to embrace a calmer life that will allow us to rediscover our mis-named “dead” time, our moments of contemplation and time out.

That is what the exhibition Sooooo Lazy. In Praise of Squandering, at CaixaForum Barcelona is about. The show includes 50 pieces by 15 artists and is the latest in the programme for young curators, offering the grant holders the luxury of working with pieces from the collection of “la Caixa” Foundation and the Contemporary Art Museum of Barcelona (Macba), and also in this case various works loaned from other collections such as the Fundação Serralves and Cal Cego. 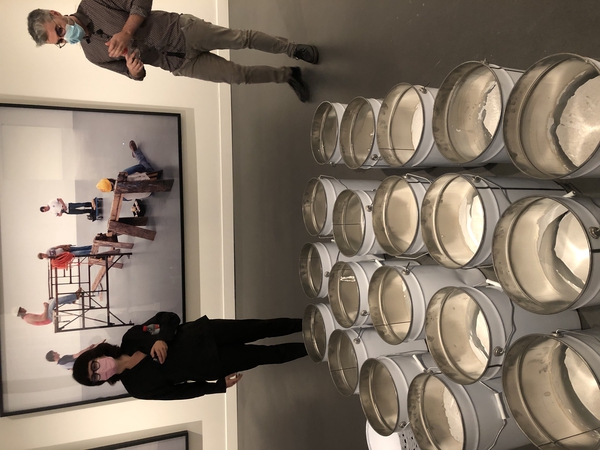 Beatriz Escudero and Francesco Giaveri, curators of the exhibition, in front of the work by Ignasi Aballí. Photo: @ArteEdadSilicio.

It is almost certain that this defence of laziness did not have all the implications it does now when curators Beatriz Escudero and Francesco Giaveri chose it as the storyline for an exhibition that criticises hyperactivity and offers an ironic commentary on the induced needs whose job is to turn us into compulsive consumers of whatever: clothes, food, TV series and even culture. 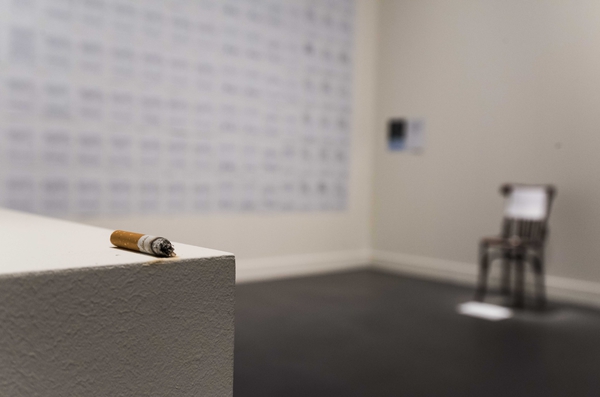 General view of the exhibition, with the work of Misha Bies Golas in the foreground.

Which is why that fag-end resting on the edge of a box seems so sweet and hypnotically fascinating, as if it had been left there by a worker called back to duty by the foreman, or a journalist taking notes. The cigarette, a work by Galician artist Misha Bies Golas, has been consumed without anybody smoking it, which is a perfect metaphor for those breaks that are increasingly short, increasingly precarious and above increasingly interrupted by the total connectivity which we enjoy but also suffer. 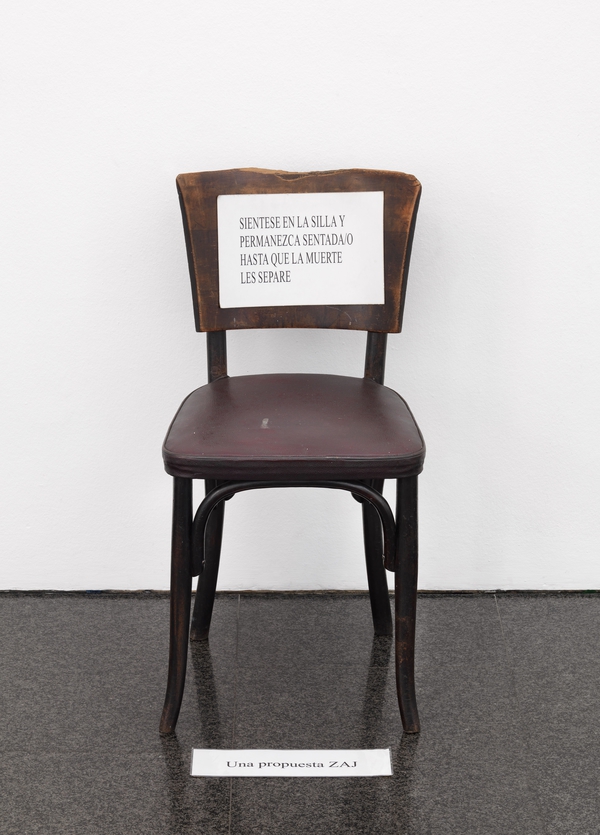 With the exception of the solitary and autistic Silla Zaj by Esther Ferrer, which invites the visitor to be seated despite the fact that they never can since it is a work of art (it is from 1974 – nothing to do with the virus), the cigarette end is surrounded by powerful works which claim their place in the space through the multiplication of their elements.

Laziness: the desire of all humans and the nightmare of capital.

There are the white lines on the white leaves of Alberto Gil Cásedas, all the payslips that artist Francesc Abad ever received as a teacher, and the paint-filled cubes that Ignasi Aballí left to dry while thinking about how to use them, placing “reflection before action, constraint before expression” in the words of the artist. it is the other side of laziness: the desire of all humans and the nightmare of capital. 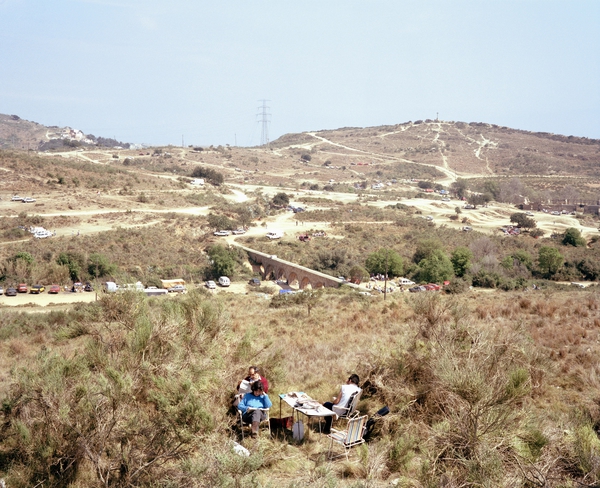 The spectre of unemployment that soars over our future comes to life in the painting of the Agustín Parejo School collective, pioneer in urban and social activism, giving way to another room which is dedicated more specifically to leisure, with sketches of the city of play and creativity imagined by Constant, the photographs of unregulated entertainment far from the economic circuit captured by Xavier Ribas in Barcelona’s periphery, and the video by Priscila Fernandes about the mythical country of Cucaña, which should really be enjoyed in comfortable loungers, were they not prohibited as a result of Covid.

The exhibition route, which sets out with the first works in Barcelona of Mozambique artist Ângela Ferreira, evoking the work dynamic in a large textile factory like Casaramona before it became the Caixaforum, concludes with a space of introspection – a small chapel containing two monochrome canvases by Agnes Martin and a surprising piece by Camila Cañeque, almost hidden in a corner of the floor: two humble closed eyes marked out only by the lines of the lashes. Next to them a QR code takes visitors outside the exhibition via a video showing a deserted beach in an invitation to escape and contemplate, endlessly, timelessly, fearlessly.

The exhibition Sooooo lazy. In Praise of Squandering can be seen at CaixaForum Barcelona until 18 April 2021.