You can never really read the work of Salvador Dalí without knowing the literary legacy of Carles Fages de Climent. This is shown by the Dalí expert Josep Playà in his book, “Fages Dalí, geniuses and friends”, an edition of Brau Edicions, with the support of the City Council of Castelló d’Empúries, and the City Council of Figueres, on the occasion of the Year Fages de Climent 2018.

In this book Playà sheds light on some of the little-known or unpublished details about the points where they lives of these two creators from the Empordà converge. 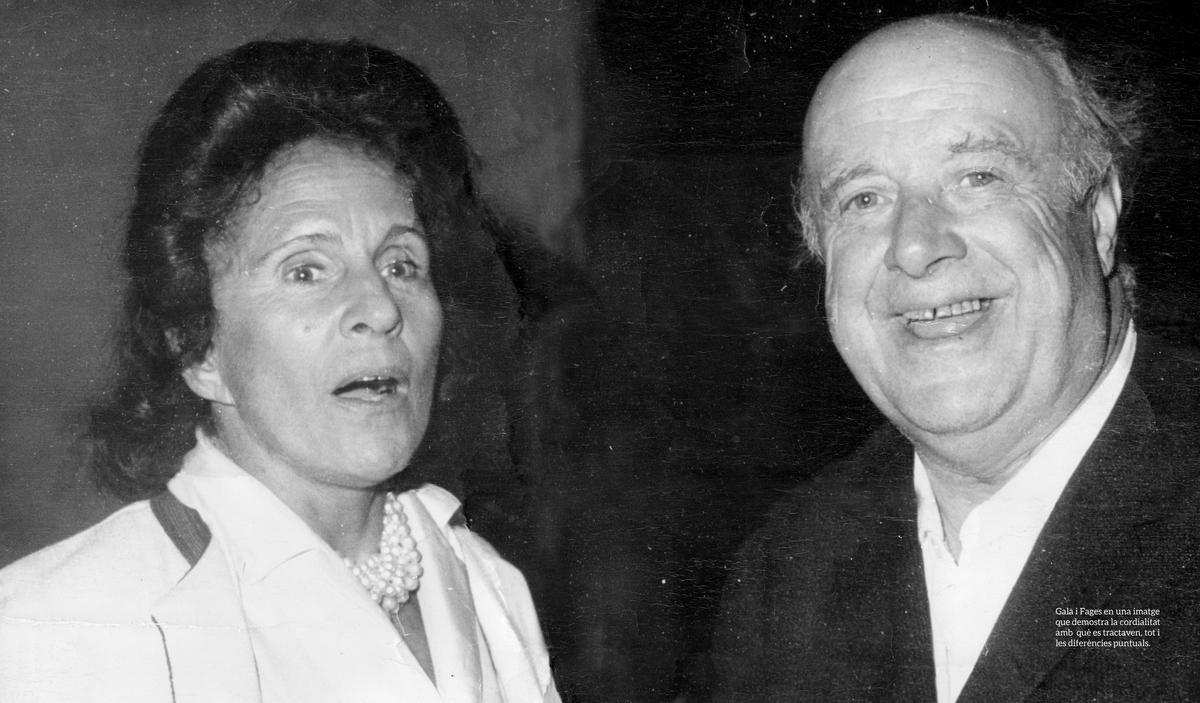 Among them is the fact that they were born in the Carrer Montoriol in Figueres – Fages’ parents had an office in the same street – their childhood in the La Salle Catholic school, known as the Fossos de Figueres, where they coincided in the 1910-1911 academic year. Then there was Dalí’s participation in the 1922 competition organised by the Catalan Students’ Association probably on the suggestion of Fages who was one of the organisers and in which both Dalí and Fages received prizes from the jury.

Both also initially showed a commitment to socialism and the workers’ movement, separately, despite the fact that over time they would renounce this position. The author tells us that the poet and the painter parted ways in 1927 as a result of an article published by Fages in La Nova Revista, in which he describes his friend as performing “superrealist acrobatics” in a visionary act. In a letter to Sebastià Gasch dated November 1927 Dalí made his anger with the poet clear. The reconciliation, Playà tells us, must have come earlier than expected since Dalí signed off a postcard sent to Fages de Climent just after arriving in the United States in August 1940 with “a putrefied embrace”.

The book goes into great detail about the work they produced together: Les bruixes de Llers (The witches of Llers), published in 1924, which for the young Dalí mean exposure in Barcelona circles. It talks about the long journey involved in the publication of Balada del sabater d’Ordis (Ballad of Ordis the shoemaker) , which finally came to press in 1954, and documents the main character of the work, Ordis which Fages and Dalí jointly help to mythify.

The ‘auca’ El triomf i el rodolí de la Gala i en Dalí (The triumph and the rhyme of Gala and Dalí) is the last work that these two geniuses produced together, working on it over 15 days during the summer of 1961, converted by Dalí into a Pythagorean ‘auca’ full of rhyming couplets and numerical symbols. Finally these drawing have become a compendium of Dalían mythology. In this book Playà sheds light on the working process of the two friends, with the records of each of the rhyming couplets written by Fages and corrected by Dalí, and the translation of part of the couplets into Spanish with comment by the poet. From this we can deduce the great admiration that Fages had for Dalí, and that Dalí also had a great appreciation for his poet friend, to whom he have free rights of reproduction of the auca, which was republished on several occasions.

Dalí and Fages in an image published in the book, pages 96-97.

There is an exhaustive review of the Catalan cultural figures that they brought together, such as Eugeni d’Ors, Gaudí, Francesc Pujols and Marià Fortuny. Between the two there was an exchange of correlative thinking which fed into the landscape and the cultural baggage of the Empordà: both of the, in the words of Playà, exercised “Empordanese patriotism”. They were both also active in defending the natural heritage of the Empordà.

Playà leaves unanswered the question of whether Fages and Dalí, accompanying Federico Garcia Lorca, really visited the Garrigal neighbourhood in Figueres, as described by the poet in his last article in 1968. Or if they visited Llers together before producing Les bruixes de Llers. Together they had a shared sense of irony and sarcasm and they often told of contradictory or exaggerated events.

The Empordà provides the creative drive for both geniuses.

But if there is a work which was a constant reference in the  mythological lucubration on the Empordà by Salvador Dalí it was the talk Vila-sacra, capital del món, given by Carles Fages de Climent on 3 February 1956, but not published until 1967. On learning of the death of his friend in 1968 – the same that Marcel Duchamp died – Dalí referred to it as one of his best works. It includes some of the major figures from the Empordà such as Alexandre Deulofeu, Joan Carbona, Claudi Díaz, Ramon Reig, Bartomeu Massot, Joan Sibecas, Evarist Vallès and Pelai Martínez, among many others, which make up the myth of the Empordà – the creative drive of both geniuses.

Some of Fages’ ideas accompanied Dalí in some of his craziest thoughts when he was conceiving the creating the Dalí Museum-Theatre. Fages and Dalí became two different views which fed off one another until the death of the poet and beyond. For example, in Dalí’s work Crist de la tramuntana which accompanies Fages’ poem  the Oració al Crist de la Tramuntana; in the works of the painter in a manner which is “highly spiritual two geniuses have found each other yet again”. And today we can celebrate that through this book.