Recently there has been some controversy about the portrait of the King of Spain by the portrait painter Hernán Cortés Moreno, specialist in this type of work.

Indeed, Cortés is a great portrait painter – if he wasn’t an art historian of the calibre of Lola Jiménez Blanco would never have accepted the curatorship of an exhibition of his work. However, this artist works with the measured style of Vicente López, who portrayed the effigies of his portraits with noblesse, unlike the crude technique of Francisco Goya who, despite also being an official painter, produced portraits of his subjects which were often less than flattering.

In Classical painting the portrait was one of the most highly valued genres, and it is logical that the painter could show their ability to reflect the most important aspect of humanity which is the human character of their subjects. This is what was understood in the classical rules of the Academy, which placed representations of people above all other pictorial works. And not everyone is capable of applying their technical knowledge to make a great portrait.

Even from the time of the Enlightenment there are major portrait painters such as Francesc or Vicent Rodes, of whom Maurici Serrahima said that “there was a time [the first half of the nineteenth century] that everyone who was anyone in Barcelona had their portrait painted by Rodes”. Both of them enriched the galleries under the control of the Junta de Comerç de Catalunya, although now held in the Reial Acadèmia Catalana de Belles Arts de Sant Jordi. And this kind of gallery (like the university rectors or the deans of the professional associations and directors of all kinds of societies) were the main clients of committed portrait painters. In Barcelona, the Jaume Balmes Secondary School, the only middle level school for many years in the city, dating from 1845, has a gallery of  portraits of its directors.

Of the Catalan Romantic portrait painters one of the most outstanding is Claudi Lorenzale, but even more so Pelegrí Clavé and Joaquim Espalter, who painted subjects from Mexico and Madrid respectively who were on a par with painters from abroad such as J.A. Dominique Ingres and Federico de Madrazo in terms of the fine quality of their work. Evidently the most successful in this genre was Josep Galofre, who despite lacking the subtlety of his colleagues, painted a portrait of the Pope.

On our own doorstep, the gallery of the deans of the Law Association of Barcelona has an excellent collection of works of this genre, and despite the fact that one of the painters was the patriarch of Catalan realist painting, Ramon Martí i Alsina, none of his portraits has the power of Ramon Duran i Bas, by Antoni Caba (1893), who was without a doubt the best Catalan portrait painter of the second half of the nineteenth century.

From that generation, although Martí i Alsina was the most decisive painter, more convincing as portrait painters were Francesc Torras Armengol and Pere Borrell del Caso, who, while not departing from the convention of the genre tended to display a high degree of accuracy in their work. Jaume Pahissa, a disciple of Martí i Alsina and much better known as a landscape painter, has half a dozen portraits of doctors from the Faculty of Medicine with that of the professor Carlos Siloniz strays from the norm since the doctor does not appear wearing the mozzetta and medal like most but carrying out a demonstration, with an expressive face, on the dissection table.

The artists’ skill was taken for granted, but their objectivity was not always welcome.

Especially significant is the Gallery of illustrious Catalans which was established in 1871 by Barcelona City Council and is now installed in the headquarters of the Royal Academy for Fine Arts. The artists are among some of the most important painters of each period, but the portraits were not painted from life, but indirectly from graphic documents, since none of the personalities was alive at the time the decision was made to immortalise them in a portrait. The same problem occurs in the collection of portraits of personalities in the Ateneu Barcelonès, also made post mortem; but in spite of this the portrait of Josep Yxart painted by Lluís Graner (1895), in which he appears surrounded by lighted candles, is one of the Catalan portraits most worthy of mention from the period. 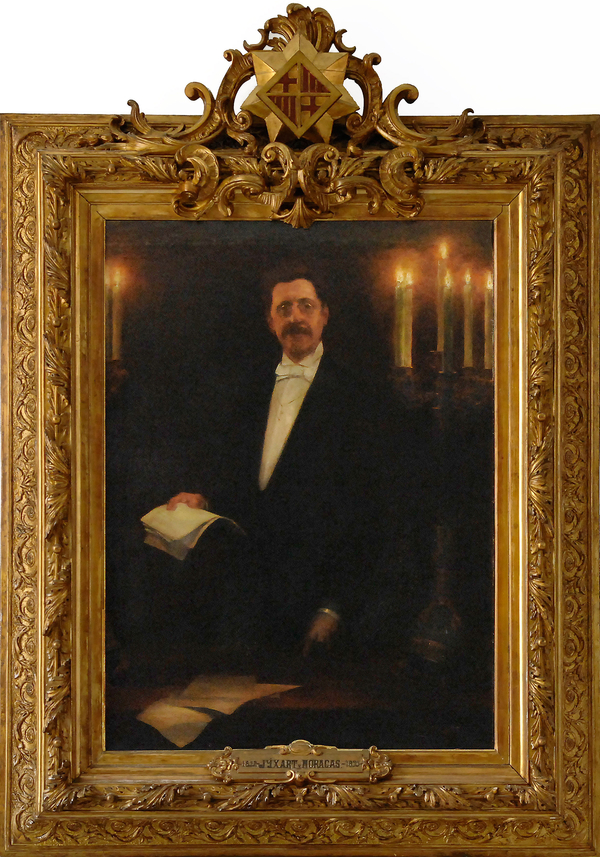 Many painters from that period carried out commissions of that this kind –Francesc Masriera, Francesc Torrescassana, Modest Teixidor, Dionís Baixeras– and some, such as the hyperrealist Cristòfol Montserrat, dedicated themselves almost exclusively to the genre. But this kind of work had its limitations and it was much more complicated a task to produce these types of portraits without falling into conventionalisms. The artists’ skill was taken for granted, but their objectivity was not always welcome. Apart from appearing in full formal dress, the portraits had to show the subjects with an air of dignity which in reality they did not always possess.

The Modernists, by definition , escaped these servitudes, but as time went by even Ramon Casas having left behind the rebelliousness of his youth came to paint the businessman Charles Deering (1914, Maricel Palace in Sitges) and the dean of the Catalan Law Association Joan Josep Permanyer (1917, Col·legi d’Advocats) with all his professionalism, but which would not be distinguished among any other kind of pompier specialist in these kinds of portrait. Some of his contemporaries tried to inject a bit of life into the images, such as Fèlix Mestres in his portrait of de Prat de la Riba (c1918), in which he is captured posthumously as if he is pleasantly surprise in his reading, with the gown and the medals taking on a lesser importance.

The Postmodernists generally did not work on portraits, and if Isidre Nonell or Marian Pidelaserra painted anybody they were likely to be friends and the portraits would be void of any solemnity, as was also the case with Joaquim Mir. On the other hand, Ricard Canals, was sometimes drawn to the genre and his works, when not sat by his acquaintances, had an artificial quality about them (Alfons XIII, 1929, Barcelona, Capitania General), and were practically as conventional as those painted by artists without his aesthetic curiosity. We know that Eveli Torent, the painter of an extraordinary portrait of  the musician Enric Morera (c1910, Music Museum of Barcelona), continued to make solemn portraits when he was older in the United States.

Hermen Anglada-Camarasa, on the other hand, when approached by personalities from society, attracted by his international fame. Instead of adapting to the rigid conventions of the genre, made his subjects much more personal in his own characteristic style, such as the portrait of the Countess Sonia de Klamery (c1913, Madrid, MNCARS), which has strangely become one of his greatest masterpieces.

The Valencian painter Francesc de Cidón, who was a well-known Modernist for his graphic work, in his painting became a Realist rooting in the tradition of the 1800s. The Faculty of medicine of Barcelona owns a number of portraits of eminent doctors by his hand. Eduard Flò, José Maria Vidal-Quadras, Lluís Garcia Oliver and Víctor Moya were other painters who largely dedicated their painting to this genre. Of them, Vidal-Quadras is perhaps the most outstanding, concentrating on the atmosphere that surrounds his subject, and is more or less in a field of this own in terms of Catalan portrait painting. His nephew, Alejo Vidal-Quadras, was more cosmopolitan but less refined than his uncle, painting from life portraits of Grace Kelly, Maria Callas and Marilyn Monroe.

The Noucentistes (artists from the early twentieth century) were not particularly keen on this type of portraiture. When Torres-Garcia, Sunyer, Xavier Nogués or Francesc d’A. Galí made portraits they were very distant from the formulism that had characterised commissioned portraits. In fact, it could be said that they lived on the edge of that particular market. One especially remarkable noucentista Feliu Elias, however, used his particular dry and precise style to paint  – post mortem – Mossèn Gudiol in 1932, for the Gallery of Illustrious Personalities of Vic. Soon after its creation it was destroyed during the Civil War by the “reds”, while my father saw how the “nationals” tried to destroy the imaginary portrait he made of Pau Clarís for the Government of Catalonia around 1933, when they stormed the Palace of the Catalan Government during the francoist occupation of Barcelona.