First Scan of an Illegal Abortion

Nowadays, when the danger of regressing to the past is so great, when any woman who stands up even minimally for women’s rights might be accuse of being a feminazi or goodness knows what else, the exhibition by Laia Abril at the Foto Colectania Foundation is especially timely.

Abril was born in 1986. In Spain, just one year previously, abortion had been partially decriminalised based on three basic conditions: danger to the mother, rape and malformation of the fetus. Abortion was not unconditionally decriminalised in Spain until 2010.

Laia Abril has made the problem of illegal abortion universal and contemporary through her artistic project On Abortion, which is currently being shown in Barcelona, after being exhibited for the first time and awarded a prize at the Recontres d’Arles in 2016, and then travelling around countries like Brazil and Turkey, both as an exhibition and as a photobook.

Despite her young age, Laia Abril is already a revered name in the world of documentary photography. But her work goes beyond the purely visual to encompass projects with a methodology which is closer to investigative journalism and documentary art practices. In fact, On Abortion is the first chapter in an ambitious project that deals with misogyny, and is followed by the subject of rape. She could have a lifelong work ahead of her.

In On Abortion Abril brings together powerful testimonies from women who have aborted illegally in Poland, Peru and Chile, and these are reflected in the photographs and the texts. For example, the relaxing photograph of a bath of steaming water in this context becomes a very sinister image. And so, of course, do the images of everyday objects which have come to symbolise the fight for abortion, such as coat hangers.

You hear a woman confessing her abortion to a priest.

Her desire to present atemporal nature of illegal abortion means that the exhibition has a whiff of the cabinet of curiosities, with pieces such as an old gynecological chair and other medical instruments, loaned by the Museum of the History of Medicine of Catalonia. Abril has also made sepia shots of objects such as the condoms used at the end of the nineteenth century, made of fish or sheep gut, and other historical artefacts belonging to the Museum of Abortion and Contraception of Vienna. There is also a room in which you can hear the horrifying confession by a woman of her abortion to a priest in Italy. 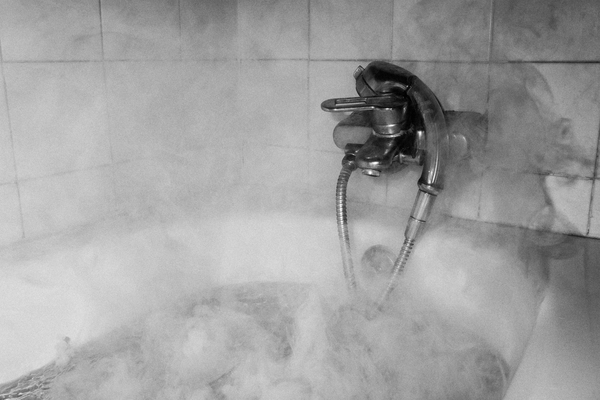 Without renouncing the aim of pricking consciences for so many unnecessary deaths and so much pain, the lucidity with which Laia Abril sees things is, by design, that of a kind of butterfly collector. Perhaps for that reason, in this departure from easy sentimentality, the apparent coldness means that whatever their ideology, visitors are not going to feel indifferent  as they leave this exhibition.

The exhibition Laia Abril. On Abortion can be seen at the Foto Colectania Foundation in Barcelona until 9 June.