Gino Rubert: Altarpieces and Earthly Delights of the 21st Century

It’s an infectious sensation, comparable, I imagine, to that produced by the artistic avant-gardes of the 20th century, especially those, like Dadaism and surrealism, that were opposed to puritanical, high-minded orthodoxies, and combined mental and aesthetic openness with an idea of liberation that was also ideological and vital. This was essential then, and continues to be so now, a century later.

Contemporary art has occasionally given signs of that form of intelligent life known as a sense of humour. There’s a sense of humour in Duchamp and in Dalí, in Carlos Pazos and in De Val, in Pat Andrea and in Pipilotti Rist, in Meret Oppenheim and in Sara Huete, in Guillem Cifré and in Cesc Riera. And, luckily, in other artists too. But humour does not usually enjoy the level of prestige more easily acquired by apparently serious approaches, both those that are genuine and significant and those that are false and soporific. So I should stress that if I say that I find this exhibition extremely amusing, I am not placing Gino Rubert on a more minor artistic plane, but rather on the same plane that Duchamp and Dalí worked on.

Since 1995, Gino Rubert (a Barcelona resident, although born in Mexico, in 1969) has incorporated collage into figurative painting in a highly personal style, part humorous, part spectral, especially in the grey, photographic faces of his characters, but also in other elements – clothes or interior décor, which combine the everyday and the bizarre, sometimes the psychedelic. Right from the start he painted everyday locations as if they were theatre sets inhabited by fictional characters, and also incorporated narrative into his paintings, or at least the sketch of a narrative. He did this at a time when the mere intention of painting a figurative, narrative picture might be considered an unforgiveable aesthetic sin by the dominant forces in contemporary art. But Rubert also had the audacity to revive something Sigmund Freud had begun much earlier: the observation and analysis of behaviours humans would prefer not to admit to, generally relating to sexual desire, repression and the desire for power over others. Rubert updated his observational method to shine a spotlight on our current, postmodern, circumstances, to focus on and attack the new hypocrisies of the present. And he has continued to do so to this day, bringing to the task his meta-realist imagination and a lightly comic tone, which in certain cases is the wisest choice. Cases whose protagonists are libertinous or sexist men or tyrannical and emasculating women are two “classics” of the coexistence or battle of the sexes, although brutal male chauvinism provides more newspaper headlines.

However, the exhibition The place to be or not to be is exceptional because of two paintings that resemble “museum” pieces. The Opening (2017) and The Opening II (2019) are large-format works (280 x 380cm), unequivocally ambitious in the best sense of the word, which is the artistic and poetic one. I think they are two splendid examples of the contemporary altarpiece.

They are group portraits in the form of painted snapshots, like scenes from a play, frozen in time. They take place in architectural spaces that look like stages, private spaces open to the public. Intimacies are exposed, as on social media. More than eighty characters appear in each canvas, almost all related to the world of art. Both paintings depict a certain spirit of the age (the early 21st century) very well, and at the same time – or precisely because of this – are examples of the modern or postmodern vanitas, with soap bubbles floating on the breeze or close by eccentric images of human skulls transformed into swimming pools and drifting boats. Both paintings are of opening parties, rather than formal inaugurations, on warm nights, in spring or summer.

Technically, too, both paintings are extraordinary tours de force. Anyone with an awareness of certain formal principles – for example, the importance of spatial axes and the lines of the gaze in cinematic composition – will understand the difficulties these compositions presented. It was not easy to place the different figures in perspective and at the correct distance, nor to configure the diverse relationships between the multiple characters, and between them and the viewer, through the different directions of their gazes.

Both paintings are structured over three storeys. In The Opening (2017), we find recognisable characters on the middle floor. Balthus, with a seductive air, appears in the area with the highest density of attractive females. In the background, near the door that leads outside, the young girl from the old painting by Petrus Christus, timeless rather than anachronous, can be glimpsed stepping out of a red car. On the left-hand wall hangs a Gino Rubert painting. It is a vanitas-landscape with figures, in which the painter embarks on a bizarre romance. There may be cocktails to enliven proceedings, but the boat is a skull and the crepuscular tones of the holiday landscape are not those of a sunset but an apocalyptic blaze. This image, too, resembles our age.

Here and there, well-known art-collectors appear transformed into dogs, clinging children or dwarves. On the roof terrace, on a night of eye-stars and floating soap bubbles, Frida Kahlo wears a miniskirt, dancing something like a twist, and the also notable figurative painters Georgia O’Keeffe and Tamara de Lempicka hit the bottle, each in their own world. Another woman nearby pours a stream of wine towards her mouth, perhaps better to gaze at the stars. On the other side of the roof terrace we find Gerhard Richter, the bankable painter, wearing a wifebeater, like a truck driver in a hot country, which allows us to read the motto or existential programme of his tattoo: “Women, Pizza, Art” (my translation from German). At the same time, down in the basement, the artist Jordi Colomer sweats profusely – he’s overdressed – while Max Beckmann frowns – perhaps irritated – in the midst of the revelry. And a sort of Mini-Duchamp or Duchamp-Redux seems to have hooked up with a stylish and much taller young woman. Good: here the artists have lost their pedestals, fortunately. What’s more, everything has an air of unreality or meta-reality and thus closely resembles reality, which is not the incomplete thing or the prison bereft of imagination that the self-styled realists tend to paint. It also includes magic and wild arbitrariness, as Shakespeare knew well when he wrote A Midsummer Night’s Dream.

In The Opening II (2019) the art continues, with classic scenes and a general tone that could be summed up as: “People look at me, therefore I am.” (Poor René Descartes…).

On the rooftop, Duchamp and Egon Schiele display the fresh bruises of a recent disagreement, now resolved: after a few drinks, conceptual art and figurative painting no longer seem irreconcilable. And there’s much more: from the Asian girl in the Catalan republican G-string, to sweet kisses of smeared carmine.

On the middle floor the painter himself makes several appearances, in different guises. In one of them, his hair styled like a Beatle circa 1966, he speaks to the founder of Galeria Senda, Carlos Durán. In another he is more easily recognised and leads the curious little dog from Van Eyck’s Arnolfini Wedding: the 15th century is still a presence in the 21st. The painter also appears as a wide-eyed boy clinging to the legs of a desirable woman. Among these three complementary Ginos I find a strange version of myself, too, dressed like something from the cover of Sgt. Pepper’s Lonely Hearts Club Band or Ottokar’s Sceptre, with a grey Nosferatu-like cast to my face, compensated by green sunglasses that remind me of a psychedelic single by the flamenco pop duo Lole and Manuel: Todo es de color. I’m also holding an edition of the underground comic Makoki, just as, not far away, the philosopher Xavier Rubert de Ventós – the artist’s father – stands holding a book entitled Arnolfini. Finally, in the basement, Max Beckmann is still lonely and grim, two girls smooch in the bathroom, and the scene is completed by the typical passed-out party casualty of substance abuse: a young blonde sprawled on the floor is attended to by… Gino Rubert, this time in the role of the attentive doctor.

The whole is a diverse portrait of a society, although its primary focus is the world of art. This is why there are no characters in this show as outrageous as those of his previous exhibition, dedicated to Mexican ex-votos, which channeled the aesthetic of a Latino brothel, adorned by characters like the violent Don Vicente, the man known as “The Toad of Tucumán”.

The place to be or not to be has precedents in Rubert’s work. There are elements that were prefigured in El jardín de las malicias (1996) – for example the dog-men – and in his large-format painting for the exhibition on Freud at the CCCB (1998-1999), in which the three storeys led from the sub-celestial superego to the subterranean unconscious, via the ego at street level.

But what’s more, the large-format pieces, like all Rubert’s paintings, evoke all kinds of other works, ancient and modern. Bosch’s Garden of Earthly Delights and A Midsummer Night’s Dream, but also Beyond the Pleasure Principle and other essays by Freud, for his determination to face our sinister side, and many of Nietzsche’s essays, for his defense of freedom, vitality and redemptive laughter. 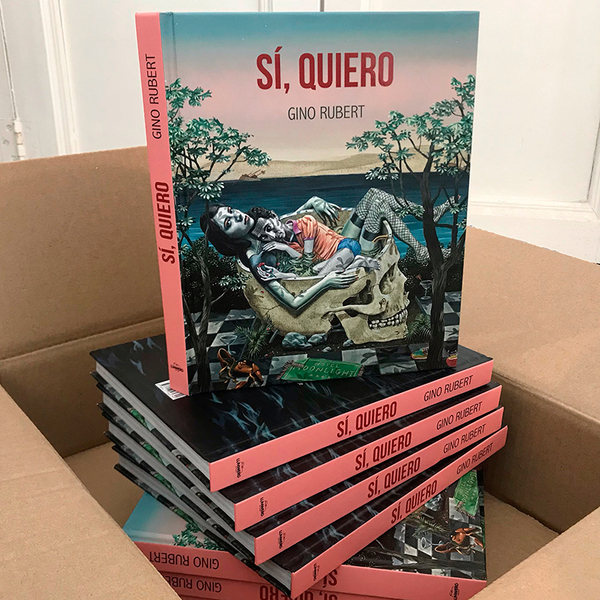 Other, very different, works too, by Ibáñez and Hitchcock: the long-running Spanish comic strip, 13, Rue del Percebe (1961), which removes the side of a building to reveal its inhabitants in ready-made comic-book panels, and Rear Window (1954), which preceded it. Not to mention the much earlier Spanish baroque satire El diablo cojuelo, “The Limping Devil” (Luis Vélez de Guevara, 1641), in which the devil lifts up roofs to spy on and reveal hidden intimacies, dispelling unfounded illusions. In the words of the Cuban son that Gino Rubert quoted in his first catalogue, “todo lo que viene se va/todo lo que va regresa” – “everything that comes, goes/everything that goes comes back again.” Which is almost what Nietzsche was getting at in Thus Spoke Zarathustra, this time set to a beat you can dance to.

The exhibition, at Galería Senda (Barcelona, until 27 July) coincides with the publication of Gino Rubert’s book Sí, quiero, published by Lunwerg and also highly recommended.