In the name of Picasso

She has proved herself once again: Rosa Martinez is not a curator but the curator. In the world of art the figure of the exhibition curator has been loved and hated, idolised and insulted,  in equal measure, Rosa Martinez is situated on the path of the great international curators who have set the trend and have known how to give meaning and sense to their work.

This has been confirmed yet again with In the Name of the Father at the Picasso Museum – a small exhibition compared to those which we are used to from Martinez (her proposal for the Venice Biennale, together with María Corral, is still one of the most successful in recent decades). Nevertheless, it overflows the limits of the assigned exhibition rooms to invade other spaces in the museum in a true cross-dialogue between the past and the present, between the father and the various drifting paths of his sons.

It is a dialogue which began even before the exhibition with two performances. In the first, Eulàlia Valldosera conjures up the spirit of the father- master by antonomasia: Pablo Picasso lord and master of his women, his children, his collectors and probably almost everyone who surrounded him. Picasso and Jacqueline Roque, his last wife, met when she was 26 and he was 72. In the 11 years that they were together Picasso painted her portrait more than 400 times and it is precisely through one of his most famous portraits that Picasso and Jacqueline manifest themselves to Valldosera during an action involving a medium. 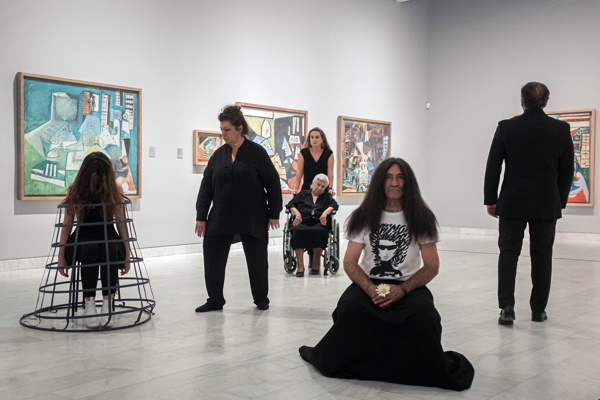 Performance of the Morente family at the Picasso Museum in Barcelona. Photo: David Airob.

“Eulàlia has dared to recognise a gift that allows her to penetrate worlds which are normally closed and she has been sufficiently humble to turn herself into a channel to verbalise tensions which are never confessed and to heal deep wounds”, with most of the artists in the exhibition for many years. The brave ad sincere action of Valldosera, which aims to “recover art as a healing agent and return to its original potential as a sacred act”, has been captured in a video which can be seen in the exhibit, as well as a performance by the entire Morente family, under the baton of Aurora Carbonell, the widow of the singer-songwriter. Since Enrique Morente sang Picasso’s poems, the family has got together to sing Las Meninas in an action which left the audience of over 100 people who had the privilege of seeing it in goosebumps.  Also exhibited is the jacket with Picasso’s eyes painted by Carbonell before a concert given by Morente in the Liceu Opera House. He went with his jacket still wet”, the artist remembered. As the wife and muse of the famous singer-songwriter she had probably experienced some of the contradictions that affected Picasso’s female friends.

“Let me tell you a curator’s trick. Thanks to the mounting, Picasso’s eyes look alternately at the entering visitor and at the photograph by Santiago Sierra of some prostitutes tattooing themselves with a straight line up their backs”, Martinez says, explaining the works with rigour and love, articulating a story which shows the complete clarity of Picasso’s artistic and existential inheritance, “to open up new paths as he himself wished”.

There are another two textile works: an embroidered minotaur by Tania Berta Judith which is an invitation to reinterpret ancient myths, and the cartography of the bombings in Spain the in the Rif in 1939q, embroidered by Cristina Lucas. Both form part of a series about the pain of wounds and the scars which are left. “I trace the bombings to rescue from oblivion all those towns which did not have a work like Guernica in remembrance of them”, Lucas explained.

The third dialogue is established between the Doves Hall and the intervention by Pilar Albarracín – a powerful woman if ever there was one – who last November organised a parade through the city of Madrid of more than a hundred women dressed in flamenco costume to open the Tabacalera de Madrid cultural centre. Here, she exhibits a stuffed dove with a bullet in its beak, which is not announcing the return of peace but the permanence of war. It is accompanied by a video which showed the desperate flapping of a trapped dove, surrounded by the oppressive wound of bombings.

The multifaceted aesthetic and ideological legacy of Picasso, which Martinez has dissected through carefully chosen works, is completed with the political Picasso which emerges with 196 declassified FBI documents with information collected about an artist who never renounced his membership of the Communist Party and died in France as a Spanish political exile, since he was never offered French citizenship despite having requested it. Daniel García Andújar’s work shows he paradox off the truth, since despite being declassified, the documents display numerous parts which have been blanked out and whose content we will never know. The commercial side of Picasso cannot be ignored either. The brand which has created an aesthetic and filled houses throughout the world with posters of paintings which are genuine milestones in the history of art.

The installation by Elo Vega and Rogelio López Cuenca turn Picasso into dozens of caganers[1] in a summary of the characteristic elements of the Catalan identity. And not only his works. Picasso has given his name to bars, hotels, perfumes and even cars. “It is a real cornucopia, or, in the vernacular, a full time flow”, conclude Vega and López Cuenca.

The exhibition In the Name of the Father can be seen at the Museu Picasso, Barcelona, until 24 September.