A group exhibition on time brings together philosophy and contemporary art at Can Felipa. With nine artists and a Heideggerian title that says “Waste time and buy a watch to do so!”

In the Can Felipa factory space hang sheets by Alán Carrasco (Burgos, 1984) listing the number of deaths in labour accidents in Spain in 2018. 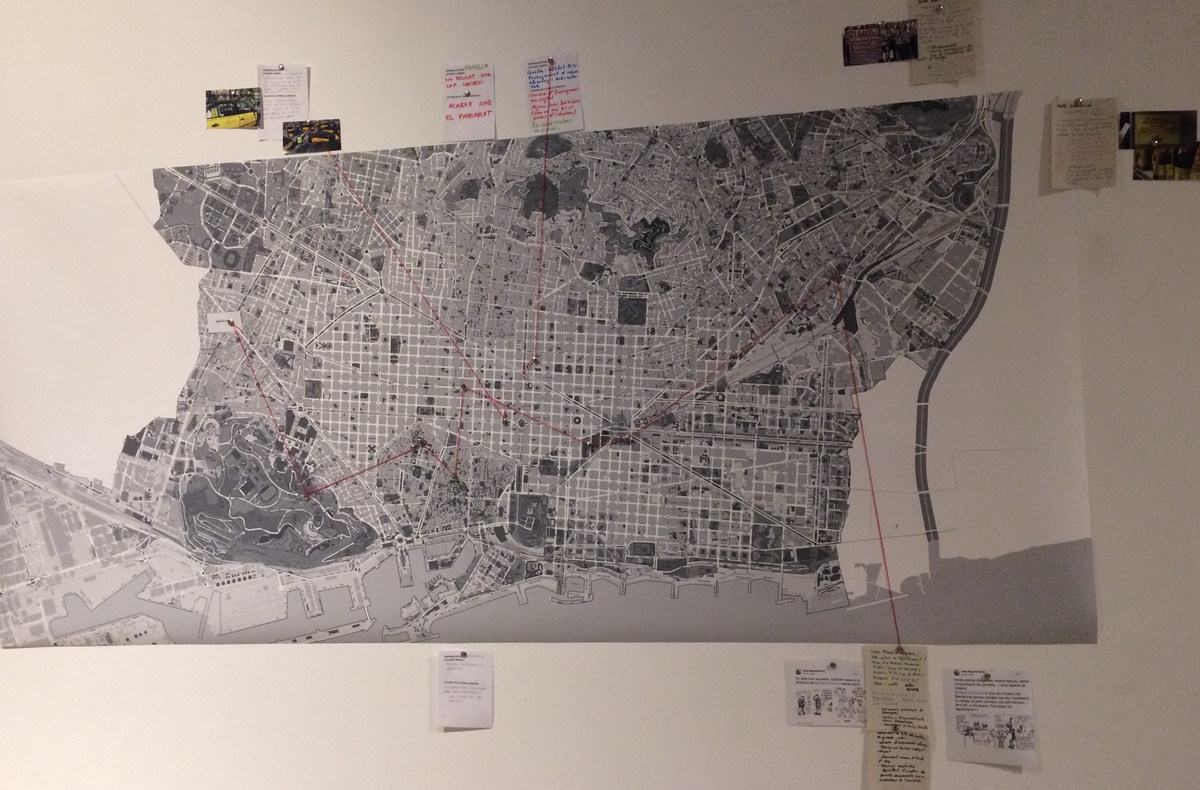 In this old textile factory turned exhibition space Júlia Montilla (Barcelona, 1970) document the loss of labour rights of different groups in Barcelona in recent years, in a work that grows and grows. In the space which contained the old Catex looms, Christina Schultz (Munich, 1972) and Juan Luis Moraza (Vitoria, 1960) share slogans about the labour society as a society of pain: Hay que dejar de trabajar/Hay que trabajar el dejar, writes Schultz, while Work Is (All) Over, is Moraza’s ironic message. And it goes on to include new art proposals excellently selected by Clàudia Elies (Barcelona, 1991) and Marc Mela (Mataró, 1989) – winners of the annual competition run by the board of Can Felipa: the former bringing her contemporary art baggage and the latter his education in philosophy and physics. 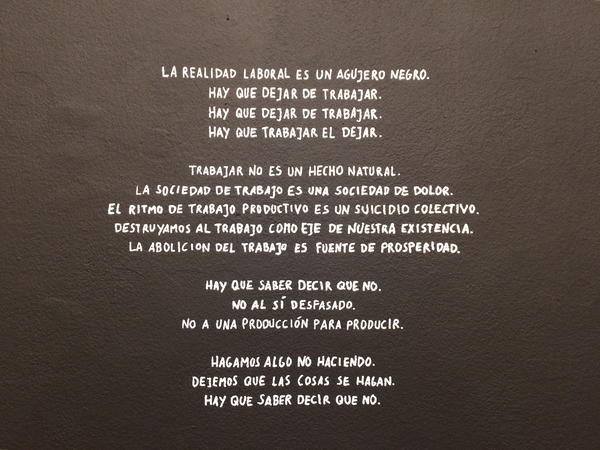 Theirs is not an easy message. When finding a job continues to be an urgent necessity or most of the population, calling for the end of the tyranny of work requires some explanation, as the curators provide, in fact, in their text. But one step at a time.

Time has never been an easy subject either in philosophy or in art. In his memorable Historias de cronopios y de famas, Julio Cortázar warned that when you receive a watch as a gift you are not only being given an object but you yourself are being gifted to the watch. That is how he condensed that strange human concept that is time. Martin Heidegger also stressed the same point in our unique capacity to anticipate the future and not leave the past (often allowing the intensity of the present to escape us). It is not as though we live within the awareness of time; it is that time lives within us, and this is seen in some of the works of the exhibition.

But this show goes further than a simple existential confirmation. The exhibition insists on the perverse association between time and capitalism. Or, if you like, between the experience of time as a purely productive element and the interest that capital takes from it. If the factories of Poblenou emptied out to the sound of a siren after eight or none hours of alienating work, it is also true that the workers left the looms behind them. But with more recent capitalism where production depends on knowledge and creativity it has come to fill all the hours in the day. Simply because it has become linked to thinking and the mind never stops. It is the intangible and cognitive work which cancels out the old distinction between otium et negotium making all human activity a race for production. Working on your body, your mind, planning holidays…that is “disciplinary time and absolute work” as the curators explain in a text, which allows the works to grow.

The lifespan of the calendar is reduced by pure numerical calculation.

Returning to the exhibition, while the videos of Mariona Moncunill (Tarragona, 1984) provide a good condensation of this outrageously productive regime with the cast-iron discipline of the machines room at the gym, Alberto Gil Cásedas (Saragossa, 1991) focusses on our unhealthy relationship with the calendar, marking off the days like any prison in the world. But he does it with a white pencil on a white sheet of paper. The only testimonies to this useless gesture are the pencil sharpenings, which are seen as an absurd offering by which the lifespan of the calendar is reduced by pure numerical calculation.

Year ago Édith Piaf sang her mythical Je ne veux pas travailler. And even longer ago Friedrich Nietzsche published his atrocious and brave proposal of the eternal return: live every moment as if we wanted it to be repeated again and again. Along these lines of thought about time, Javier Peñafiel (Saragossa, 1964) tries out a new calendar in Can Felipa. Instead of seven days a week and twelve months a year his includes days of his own, days that belong to nobody, common days, similar days and unique days. Try it out. This exhibition is not a call to waste time, but an attempt to make us think about it. And if we think about it, we may be able to turn it around.

The exhibition Perdre el temps i adquirir un rellotge amb aquest propòsit! can be visited at the Center Cívic Can Felipa, Barcelona, until 13 April.