Kitsch Aesthetic as a Means of Protest

The AES+F group doesn’t care whether they are labelled as frivolous or kitsch. Their aesthetic is generally considered to be on the verge of bad taste.

But for these four Russian artists (Tatiana Arzamasova, Lev Evzovich, Evgeny Svyasky and Vladimir Fridkes, all brought up during the Soviet period), the language of art, pure and simple, and the iconographic references to the western artistic tradition are tools for their artistic practice. The group was established in 1987, and since then, whether through photographs, video or large multimedia installations, their work has been exhibited in places such as the Venice Biennial, George Pompidou Centre and the Tate. They are a reference for contemporary Russian art.

Now, having just been exhibited at the Manifesta 12 in Palermo, their project Mare Mediterraneum can now be seen at the Senda gallery in Barcelona. The project deals uncompromisingly with the drama of migrations and refugees and European policies on this situation.

Obviously this topic is not new in current artistic practices. But what differentiates the work of AES+F from other projects on the same subject is the language that they use, and this is where the provocation of the group lies. Modelled on the Neo-Rococo style kitsch of the Italian region of Capodimonte, nine porcelain sculptures represents very unusual scenes of sea rescues. In luxury yachts and sports craft, beautiful, young and rich tourists take on board immigrants who look exactly like their rescuers. It sometimes seems like a celestial scene from the Baroque. The fraternisation is total; they all look happy on the swell of golden waves.

We all know that such a glamourous scene in these circumstances is complete fantasy. The irony is extreme and might even be annoying. Not just for the scene that is represented but for the use of an aesthetic associated with the most vulgar type of tourism, which here reminds us more than anything of Lladró ornaments.

The sea is as beautiful as it is menacing.

But AES+F know what they want: to provoke the viewer directly. Similarly, there is also a video projection in the exhibition which shows a digital sea that changes colour according to the time of day and the weather. It is as beautiful as it is menacing, with no signs of life, which makes you think more of the hidden deaths of so many people with the dream of a better life. 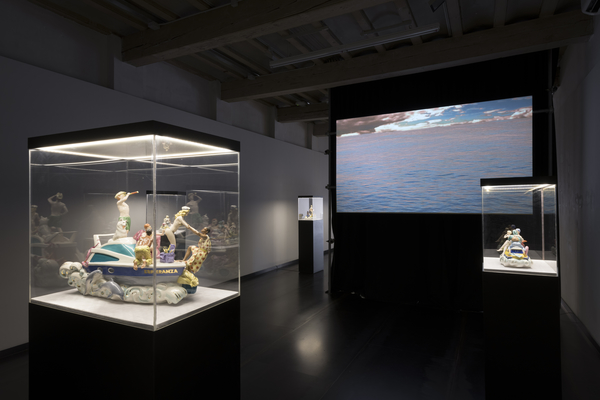 The AES + F group reminds us that in ancient times the Mediterranean united an entire world. Now it is synonymous with tragedy and intolerance. “This is the privilege of art, of the language that speaks directly to the viewer, of visual impact. Other ways of approaching this topic, which are a camouflage of art, seen dehumanised”, they say. They propose the use of the language of kitsch as a political message. It is as legitimate as a documentary project and has a more “serious” format, which does not usually tug so much on the conscience of the viewer. Therein lies the dilemma.

The AES +F exhibition Mare Mediterraneum can be seen in the Senda gallery in Barcelona until 23 March.