The Art of Symbiosis

In 1974 conceptual artist Jaume Xifra made a chair out of wire. Sarcastically, he named the piece, which is almost an instrument of torture, Art gallery chair.

The chair is currently in the central apse of Sant Climent Church, Taüll, at the MNAC and its shadow, menacingly adopting the role of the viewer, falls on the lower left part of the wall of the most emblematic piece of Catalan Romanesque art.

Next to it, the front panel of Durro’s altar, which is filled with scenes of torture that look like they have come straight from a comic book, provides the counterpoint to Xifra’s chair, under the relentless gaze of the Majesty of Christ by the Master of Taüll. Xifra’s chair has broken through the barrier and moved into the territory of the Romanesque apse—a taboo for any visitor to the MNAC. I am sure that this intromission of the ‘pain chair’ in the Taüll apse would have delighted Jaume Xifra. Because modern and contemporary artists adore the Romanesque.

But will the museum visitors understand? Will it be a shock, or a risk to see the armchair made by Tàpies in 1987 challenging the throne of Lluís Dalmau’s magnificent Gothic panel Virgin of the Consellers? It may be for some, but from the start of this century, twenty years after the opening of the Tate Modern in London, with its permanent collection organised thematically, the mix of art works from different periods in the permanent collections of museums and galleries around the world has become the norm. The linear vein of artistic time has been staunched forever. In the end, in art, everything sits together in time.

This is the philosophy that has moved the bosses of the MNAC—a public institution—and those of the Suñol Foundation—a private one—to work together on a project that intervenes with a vengeance in 17 points of the permanent collection of the museum. Nineteen contemporary works from the Suñol Foundation, which is just now commemorating the anniversary of the death of its founder, the businessman and collector Josep Suñol, make their appearance in different points of the museum.

If you look for the definition of “Symbiosis” in the dictionary you will find that this kind of association with nature always has as its main objective “reciprocal benefit” for the two different species. And, in a way, these Intrusive Dialogues as they have been called for the title of this long term project, act symbiotically for both institutions and make them more visible together. The project has been curated jointly by Àlex Mitrani, the curator of contemporary art at the MNAC, and Sergi Aguilar, director of the Suñol Foundation. The “intromission” spoken of in the title of the works of the Suñol Foundation in the museum seeks diverse analogies, contrasts, juxtapositions and associations.

The riskiest part of this endeavour has been to superimpose a line of argument on the usual itinerary of the MNAC. It is an exercise in balance that sometimes flows freely and at others forces tension in the correlation, but one which also directly involves the participation of the viewer. To what extent does the forceful and precise intervention of Xifra’s chairin the Taüll apse distract the viewer from the Romanesque work, for example? This presentation also offers a concept for each intervention: pain, affection, mystery, knowledge, suffering, atonement, humility, and so on.

There are star moments along the way such as the Taüll example. In the case of Tàpies’ armchair in front of the Virgin of the Consellers, the scenographic option of placing the object on a luxurious red fabric (very similar to the carmine of the incredible cloths on the other Gothic panels in the room), seems to be an unconscious attempt to elevate the category of the piece in front of Lluís Dalmau’s masterpiece.  Scenographically it works, and here the scenography takes on a particular protagonism; it is as legitimate an option as any other, but there is also the chance it could “annoy” those who prefer a more sober museum experience.

The 1990 shelf unit by the great Valencian artist Carmen Calvo, filled with apparently useless objects, fits like a glove in a room of Modernista furniture pieces. The contemplative eyes of the work Zeyemax (1974), by Evru/Zush, are not so far from the marvellous eyes covering the wings of the seraphims in the apse of Saint Mary of Àneu, or another work by the same artist, Sabina eyeya (1974), which is directly related to the Baroque crucifixions.

Again, scenography plays in an important role in the correlation between the bound feet in the work of Darío Villalba and the other works in the room dedicated to mystical and revolutionary paintings: the upward-facing light pointing towards the sky. The scenography also raises the profile of Chillida’s sculpture, Rumour of limits IX (1971), immersed in the tenebrism of the Baroque paintings. In the modern landscapes room, three hyperminimalist landscapes by Hernández Pijuan, facing a canvas by Joaquim Mir, give the spontaneous effect of making the paintings by Nicolau Raurich particularly forceful.

More discreetly, the face of the musician Igor Stravinski, photographed by Richard Avedon, in the portrait room of the Modernista artists blends in perfectly. In this room all the works have been lowered to eye level to give the public a direct view of the portrait—an arrangement that could just as well stay like that forever. Perhaps one of the moments in which the dialogue becomes most tense is the placing of the Brossa poem Capitomba (1986), showing an upside-down bank teller window with all the coins fallen on the ground next to a Modernista lamp by Jujol. 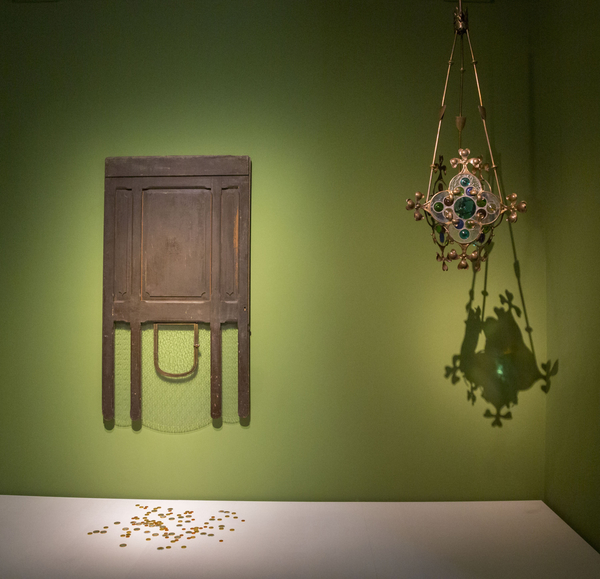 Risk and daring are the factors that both benefit and damage these Intrusive Dialogues. What is clear that they will make part of the Suñol Collection visible for a long period of time and bring new narratives and added attraction to a museum that deserves infinite viewings and infinite visits. Don’t miss it and have your say. The debate is on the table.

The exhibition Intrusive Dialogues can be visited at the National Art Museum of Catalonia until 7 November 2021.