MAC: Cerdanyola has a lot to celebrate!

For more than a decade now when we talk about art institutions, we do so in complacently: there’s no money, people aren’t interested in art or in heritage…as Barça’s van Gaal used to say: “always negatif”.

And now, precisely a decade ago, well aware of these difficulties, the Art Museum of Cerdanyola (MAC), has made a huge effort to overcome them and turn them into something positive.

On 11 September 2009, at the height of the economic crisis, the MAC opened its doors for the first time. It is a small space – a Modernist building which has housed a casino, been a summer residence and the headquarters of a pharmaceutical laboratory. And the team is even smaller – just the director Txema Romero and his assistant.

There is no money for acquisitions, but in ten years the collection has gone from 300 to 3000. All donations. And most of them private. This, along with the disinterested collaboration of the two prestigious art historians: Josep Casamartina, Fina Duran and Joan Maria Minguet.

And even if the MAC is pressed for space, a glance at the activities it offers makes it seem much bigger. The soul of the museum is its collection, of course, but if a collection isn’t explained, if we don’t get the opportunity to find out more about it, if it doesn’t provoke dialogue between different thinkers then it cannot help us to understand our role in society, or promote values such as gender equality or intergenerational collaboration, and runs the risk of becoming a sterile space.

Take two examples who are almost contemporary: postmodernist draughtsman and sculptor Ismael Smith (Barcelona, 1886-White Plains, Nova York, 1972) and painter Josep de Togores (Cerdanyola del Vallès, 1893-Barcelona, 1970). Each has a room dedicated to them. Smith was Jewish and homosexual: Sogores deaf from the age of thirteen. These factors somehow marked their lives and their work. 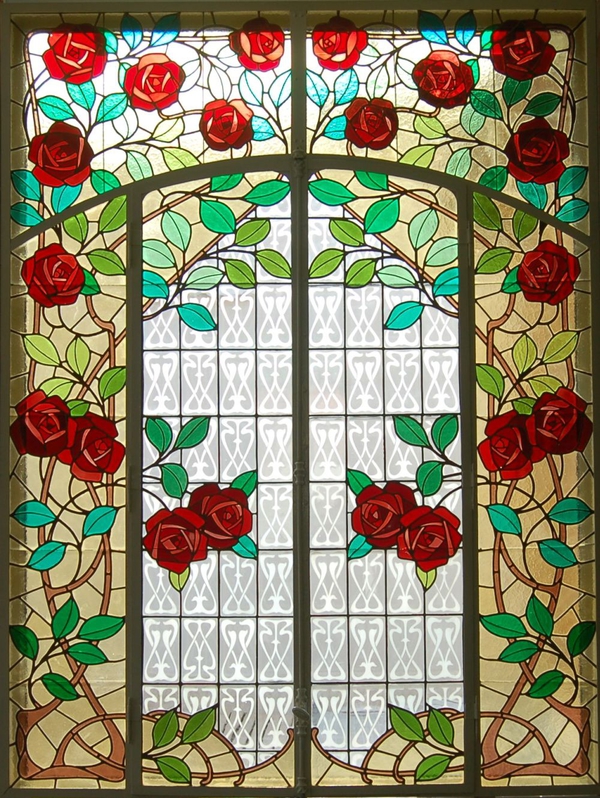 The permanent collection which occupies the first floor is divided into four sections: the route begins with a section dedicated to the two architects of the building. Gaietà Buïgas, who built the theatre-casino in 1894 for the summer visitors; and his nephew Eduard Maria Balcells, who was commissioned around 1910 by the indiano Evarist López, to turn the building into a luxury summer residence. 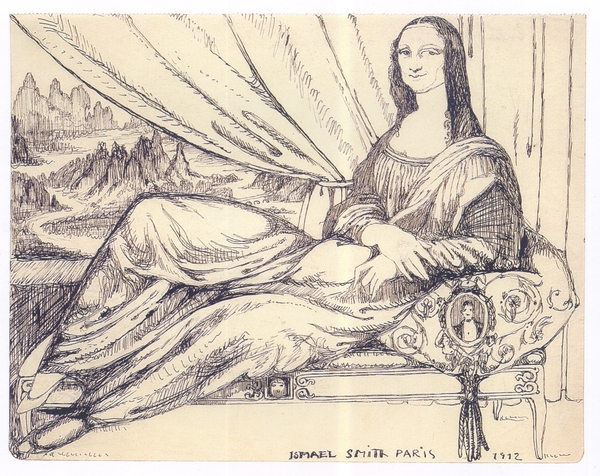 The route ends with a room dedicated to the colony of artists working in Cerdanyola from 1920 to the outbreak of the Spanish Civil War. They were creators working within the second wave of noucentisme and Art Deco such as Italian mould-maker Alberto Lena, sculptor Josep Viladomat, painters Manuel Humbert and Marian Anton Espinal and illustrators Valentí Castanys and Josep Coll.

The room dedicated to Ismael Smith contains drawings, prints, ceramics, jewellery and sculptures by this great artist who we are still in the process of discovering; a rich collection brought together thanks to the donations by Enrique García-Herráiz – the artist’s chosen heir, the Artur Ramon Gallery and the collection of Marie Christine Vila, daughter of the painter Joan Vilacasas.

In the room dedicated to Togores there are works that pass from noucentisme,  to magic realism, surrealism and more traditional realism such as the epic The Drunk (1911) or the sensual Woman with Grape (1926). There are also works by other noucentistes,  such as the sculptor Manolo Hugué, with his bust of Togolo’s daughter, Tití’s Head (1927). 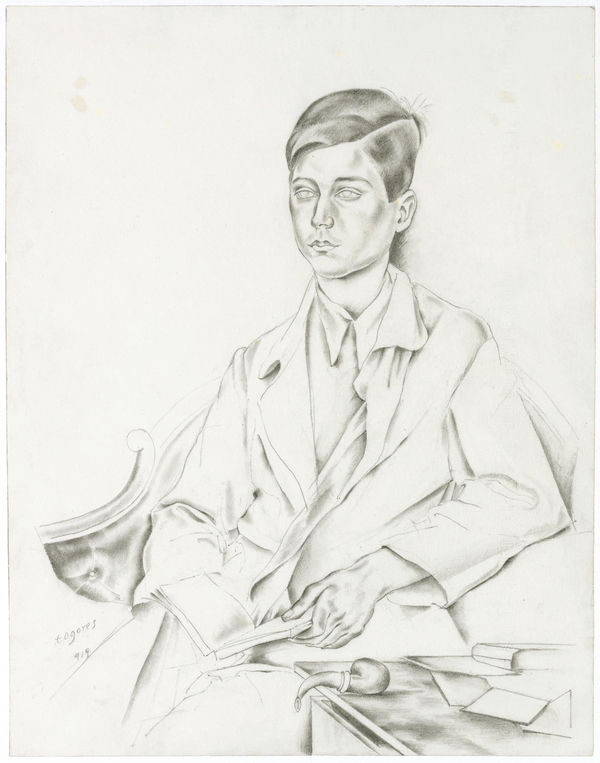 But the biggest and lightest space in the MAC is the Modernist Room, with a painting by Anglada-Camarasa, sculptures and ceramics by Josep Llimona, Marian Burgués, Modernist furniture…all bathed in the light shining through the original stained glass windows of the building: the Dames de Cerdanyola.

These panels were installed during the refurbishment carried out by jeweller Evarist López when he bought the building and turned it into his summer residence round 1910. The works are attributed to the Alsatian glassmaker Ludwig Dietrich von Bearn, and no it is not known for certain where the ideas came from for their composition (possibly the architect Eduard Maria Balcells, who ran a glass shop jointly with his sister) or who did the original drawings.

When Cerdanyola City Council wanted to buy the building, the glass panels had already been removed. They remained in private ownership until they were acquired by the Urban Planning Consortium of the ‘Centre Direccional de Cerdanyola’, and they were returned to the MAC in 2009. Between 2013 and 2014 they were restored by specialist Jordi Bonet, with the support of the Diputació de Barcelona and the Centre de Restauració de Béns Mobles de Catalunya. And last year they were declared Items of National Cultural Interest. 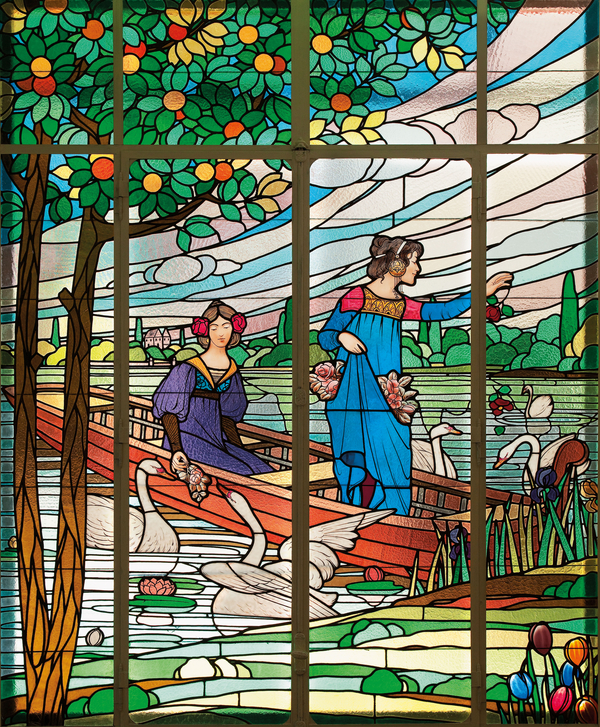 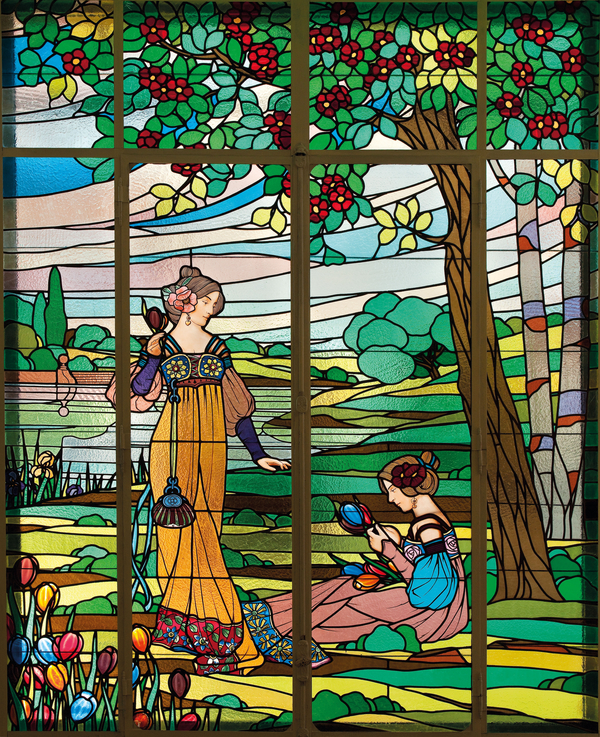 The ladies in the central scene are feeding the swans with peonies, the spineless rose. Do they symbolise love without pain? Do they allude to the myth of Leda and the Swan? Or perhaps they are praising restful love, without all the initial frenzy?

If you want to find out the meaning you can always go to the MAC and ask. Better still, if you go on 19 September at 7pm you can join the 10th anniversary celebrations and the declaration of the Item of National Cultural Interest. Why not go and enjoy a toast to the museum yourself?