Absències, a small retrospective of work by Ramon Guillen-Balmes is on show at the Busquets Space of the Massana School of Art and Design.

I confess that I am no expert in contemporary art and so my view of the pieces exhibited will not be that of a theoretician or a specialist art reporter. My training at the Massana was in product design. 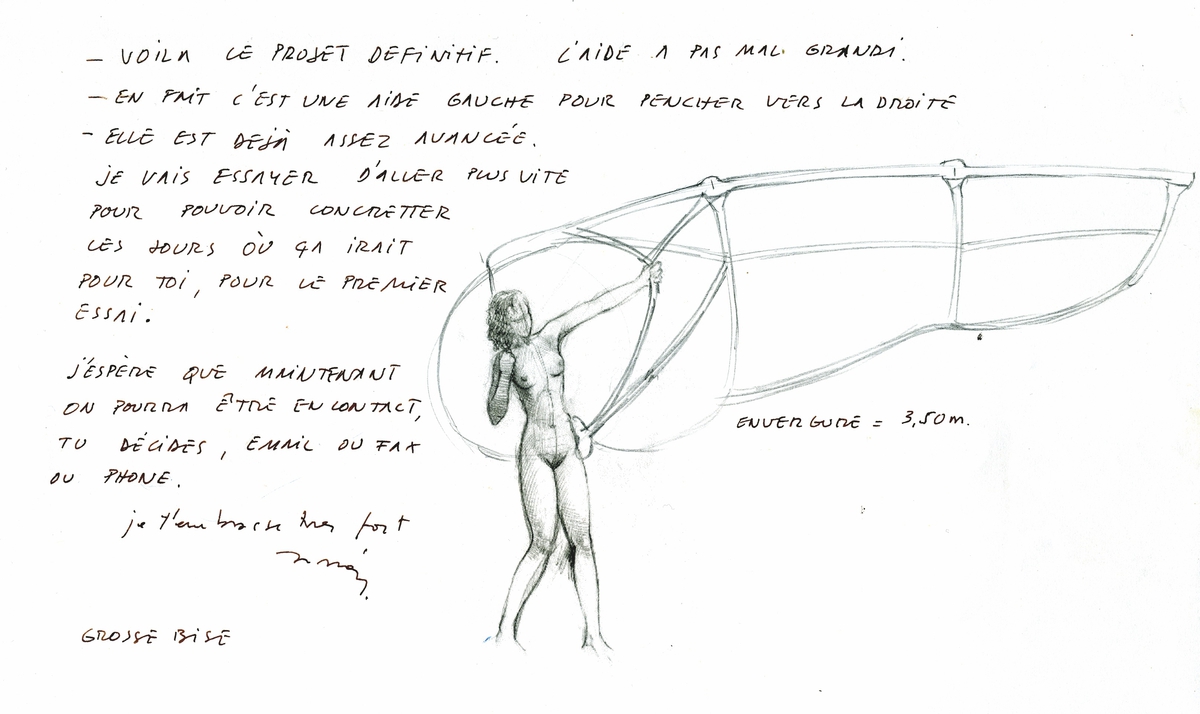 Now that is clear, I have to say that this is one of the most beautiful exhibitions that you can see in Barcelona at the moment. Guillen-Balmes’ work has the most amazing artistic, material and objectual qualities. The works that appear go from his initial Boies lliures to his Objets Trouvés d’Arqueologia d’Artista. There is also a series of scanned sketchbooks which can be viewed on small screens and some of the works from the “Model d’ús” series.

I view these objects from my position of an observer of design and I find them fascinating. The Boies Lliures is a series “vessels” designed to float and sail randomly. The pieces contain a plaque saying that if anyone fins them they should get in touch with the artist, complete with a postal address. The artists released them on the coast from where they were carried away by the tide and the wind. They are the result of an age which, together with other like-minded artists, explores the limits between actionism and sculpture. The whole piece contains details of the place and the exact time that they were released and where they were found, in the case that they were. 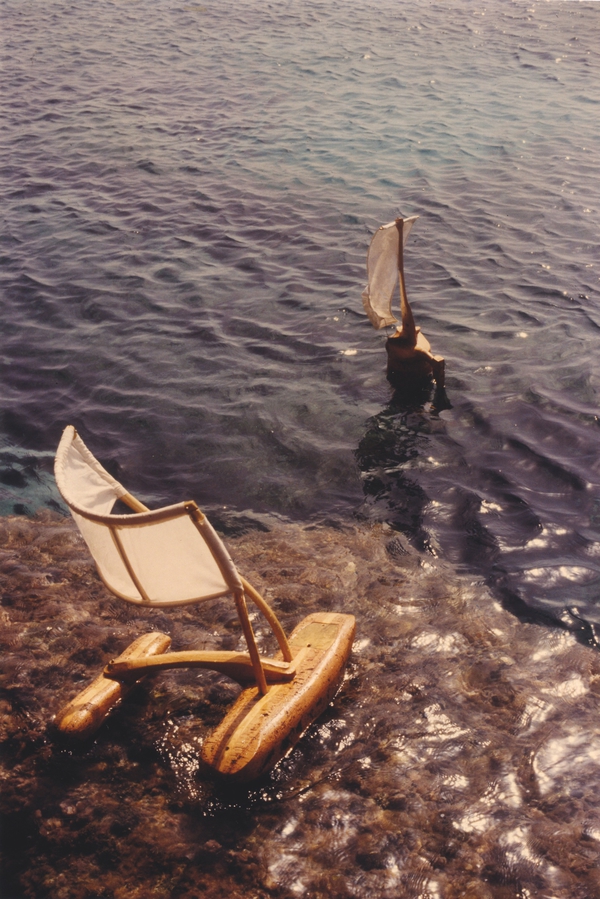 But beyond all of that, for me the beauty of the floating objects is in the materials chosen to produce them: chestnut wood, cork, sailcloth and tin. From the outset they are clearly designed to fulfil an objective and then, they are worked on patiently, almost with the dedication of a craftsperson. In fact, at first sight the objects made by Guillen-Balmes appear to be utensils, tools, extensions with a specific purpose. Perhaps their usefulness is not real but nonetheless they are pieces which have the same attraction as the work of craft which are the result of an increasing technical perfection over the year and a deep love for the materials they are made of. 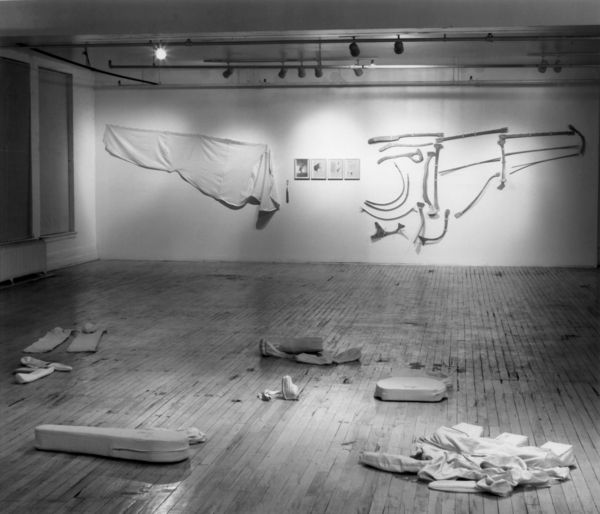 The same can be said for the objects which form part of the Objets Trouvés d’Arqueologia d’Artista collection. Their biomorphic appearance seems to indicate that they have been thought up as some kind of corporal appendix, even though we don’t know where or for whom. Their organic nature which moves between the morbid and the sexual suggests unexpected and lubricating uses, even though the component of the prosthetic cane leads us more to think of disabilities or illness like the sexually deviant characters in the nightmare scenario of Jeremy Irons’ Dead Ringers. At other times the felt, rubber, resin and wood pieces evoke design in their careful and thoughtful forms and exquisite “designs”.  And yet again, their production makes us thin of delicate and laborious craftsmanship. 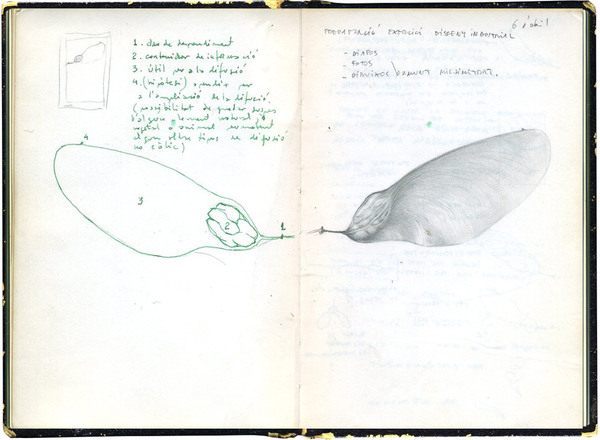 The sketchbooks show great skill for drawing but also the culture of an inherent project. The drawings are part of the process, whether for defining it or communicating it. They are constructive and in many cases they serve as working plans. And the plans are also works in themselves. Texts and images are put together in mock-ups. Among the sketchbooks I fins a familiar image: a seed from a tree named Tipuana tipu, although it is also known as Auró. The drawing is an exact reproduction of the seed and, at the same time, identifies the different parts of which it is composed. I have used this drawing for many years to explain to my design students a different way of working, which is not the functionalism of Bruno Munari. I never knew where the image came from or who it was by. I came across it and it seemed perfect for my explanation. And here it is, in the sketchbook of Guillen-Balmes. Above the image is written “preparatory exercise for industrial design”. And it fell into place. I looked into it and true enough, among his tasks at the Massana School of Art and Design was, in fact, a teacher of design.

A reminder of the constructive language of Da Vinci.

At the end of the 1990s, he made a series of pieces named Models d’ús which were based on a working process among friends, where they told him of a personal wish and he created the protheses to make it possible. It would seem to be a reflection of the usefulness of art or, rather the uselessness. Corporal prolongations, objects which are joined and in which one of the parts stands out over the other. Specifically, the prolongation exhibited at the Massana, made especially for the designer Alyssa Dee Krauss, is an attempt to respond to one of the permanent human desires: to fly. In different pieces in the  Model d’ús series there are references to a winged formed which brings to mind the seed I spoke of previously. There is also a visual code, in the sketch stage, which recalls the constructive language of Da Vinci. Or even the Wright brothers. This is where the inventor of the uselessly beautiful pieces that Guillen-Balmes offers a glimpse of in many of his works comes in. A work of precious metals in its treatment of the materials and yet almost pataphysical in its antifunctionality. 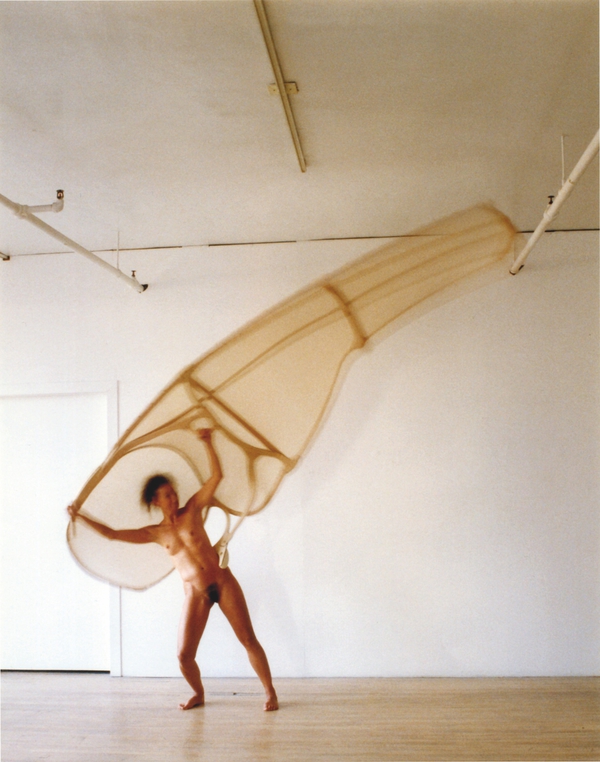 Some years ago Pilar Parcerisas wrote about an exhibition which contained these Models d’us by Guillen-Balmes: “Affable, touching, vital and sensitively warm and natural, it shrouded the realities of the human body with anatomical models and antiacademic applications; it united body and remedy, working the tactile intimacy of the inframince… A poet of forms to be enjoyed in privacy”. I could not agree more. This exhibition has to be enjoyed as well as the catalogue that accompanies it with an intimacy which, these days, is uncommon.

The exhibition Absències, by Ramon Guillen-Balmes, can be visited in the Espai Busquets of the Massana School in Barcelona until 24 May.