If we think we know about Catalonia, we cannot ignore its medieval roots. And once of the best places to see the material and artistic culture of Catalonia is at the Episcopal Museum of Vic (MEV).

The MEV is both medieval and digital at the same time. It dates back to 1891, in the midst of the Catalan Renaixença, when a group of intellectuals and clerics from Vic organised themselves to recover the artistic heritage of the region. The museum was renewed in 2002 with the opening of a new building designed by architects Federico Correa and Alfonso Milán, both of whom studied under the incredible José Antonio Coderch. This is not one of those iconic buildings destined to be shown on postcards or fridge magnets, but a mass of irregular geometry inspired by the great Catalan palaces of the modern era, and exclusively designed for the content. 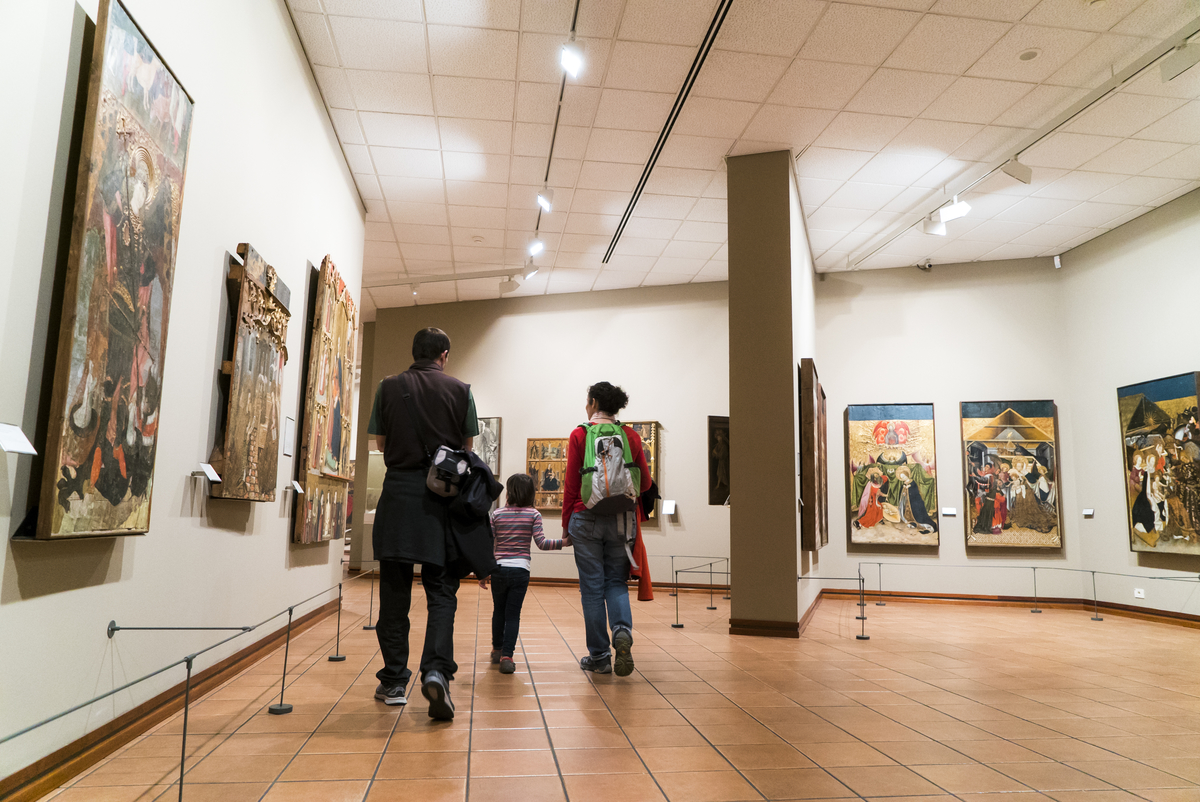 There are several collections in the MEV but the most outstanding for their originality and quality are the Romanic, Gothic art and textiles. But just being exceptional pieces of art is not enough. They need to be explained, with the details of each one and the context in which they were created.

It wouldn’t hurt to know a bit about the new Testament and the stories of the lives – and miracles – of some of the saints and martyrs that appear most often in Catalonia. Beyond faith, this is an exercise in basic knowledge which will offer us a better understanding of Catalan culture. In any case, the brief explanations placed at the side of each of the works suffice for understanding what we are looking at.

But what makes the MEV an example to be imitated within the Catalan museum scene is its website. In the Collection section you can explanations of all of the works in more detail than in the rooms where they are exhibited, with short, well-made videos, and a “gigaphoto” of the piece allowing us to see it significantly enlarged.

In the section My MEV you can organise a custom guided tour with an audio guide which you download to your phone. There are three recommended routes to choose from: Masterpieces, The Museum in 45 Minutes, or A 360º Virtual Tour. Or you can choose one of the numerous tours designed by the users. Honestly, if anyone ever had to design the teaching function of a museum, this magnificent initiative would certainly seem to be the way to go. 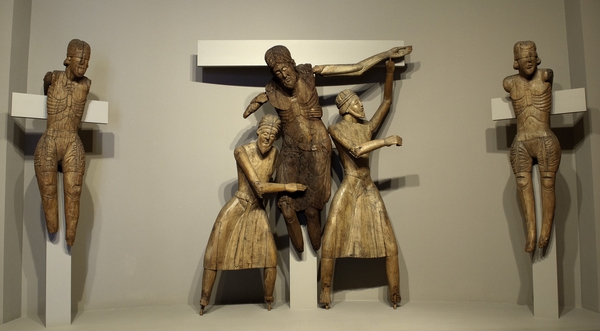 Master of Erill, The Descent from the Cross from Erill la Vall, first half of the 12th century.

The museum space is designed specifically to house the pieces. At the beginning of the route visitors come face to face with the Descent of Erill la Vall – a set of wooden sculptures from the first half of the twelfth century. This is a really exceptional work: there are very few sculptures of its monumental proportions conserved in Catalan Romanic art, and even the art of the period was not as expressive as this in expressing pain, the pathos of the two figures shown. Also, the figures are articulated, suggesting that they were used in liturgical dramas. The set was discovered, in disuse, in 1907 at a church in the Vall de Boí. The main part of the set was acquired at the antiques market by Father Gudiol, the curator of the MEV, in 1911. Two more figures, the Virgin and Saint John, were acquired by the collector Lluís Planidura and are currently held at the National Museum of Contemporary Art in Barcelona.

The defeated, lifeless body of Christ, the penitent thief, dead with his tongue hanging out, Nicodemus taking down the body of Christ while Joseph of Arimathea supports the corpse…even today we can feel the pain and resignation of the scene.

La Seu d’Urgell workshops, Mural painting with the scene of the Saint Supper, 1242-1255.

A Mural Painting with the Scene of the Last Supper (1242-1255) is a great example of the transition from the Late Romanic and Early Gothic periods. In the centre is Christ, facing forward, celebrating the Eucharist as the act which the Christian liturgy is centred on. Beside him, a described in the gospel, Saint John leans his head on him. The only figure facing away from the viewer is, of course, Judas the traitor, receiving the host from Jesus. It is a delicate composition. 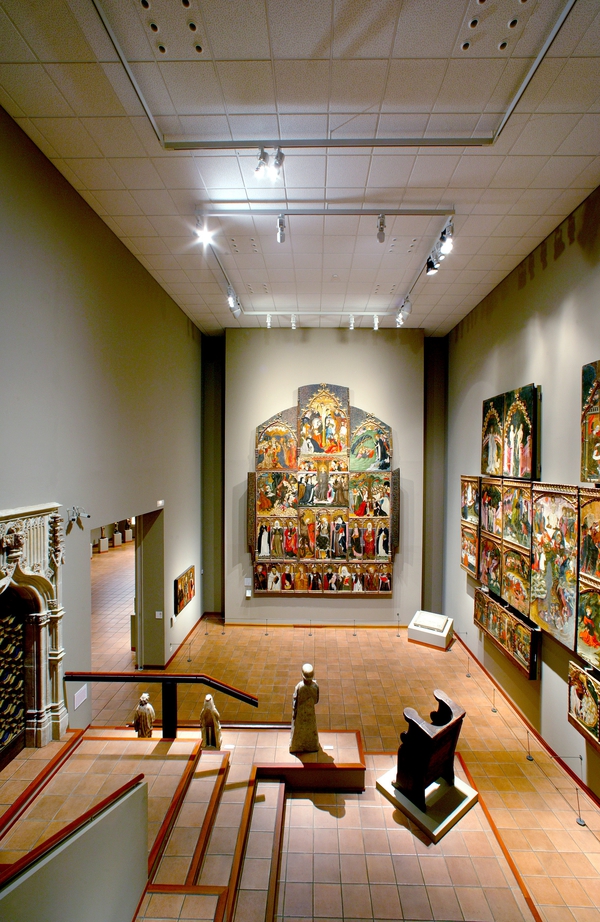 Gothic courtyard of the MEV.

Without being a criticism of other museums exhibiting large altarpieces inadequately, Room 8 of the MEV allows us a close up and also a distant view of a first-rate piece: the Altarpiece of the Franciscan Order (1414-1415), by Lluís Borrassà. 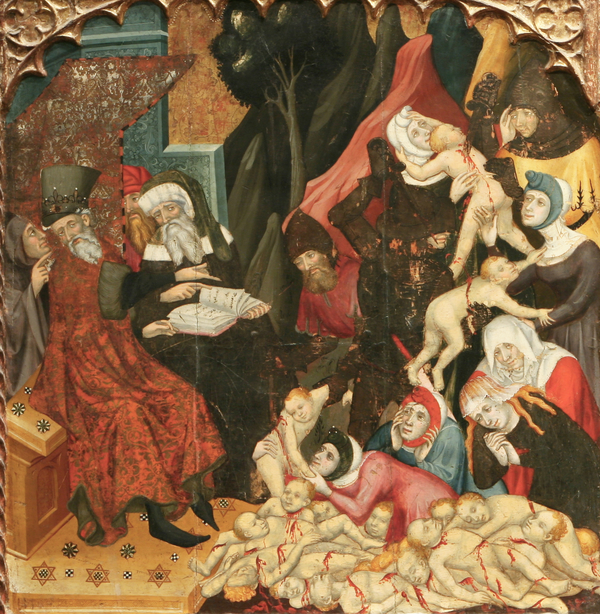 This work is one of the masterpieces of European painting from the first international gothic period and is characterised by a naturalist aesthetic based on dynamism and use of brightly coloured pigments. The naturalism is highlighted, for example in the violent scene of the slaughter of the innocents, with a sinister heap of dead babies.

Bernat Martorell marked the second period of the International Gothic.

Curiously, Borrassà’s death in 1425 coincided with the start of the artistic activity of Bernat Martorell. Martorell marked the second period of the International Gothic, with less gesticulation and a calmer feel reflecting early humanism. The influence of Flemish painting is evident.

At the MEV there are parts of an altarpiece with scenes of the life of Saint Eulalia, and a predella with scenes of the life of Saint John the Baptist by Martorell, from the Cathedral of Vic. Martorell is a poet of terror as we can see in images such as the horrific adolescent Saint Eulalia put to death on the cross as the snow protects her modesty on the lower half of her body. Or Salome carrying John the Baptist’s head on a tray while behind her a soldier has just decapitated the last of the prophets. Not even Tarantino could have done it better.

The collections, but especially the work of the museum team, have meant that at the MEV Catalan art from other centuries can speak to us without the need for glosses or intermediaries. When applied in museums, technology is often a kind of mirage or bottomless pit of resources. But in Vic they have understood and made the best use of it, aware that any tool, without adequate handling, can be a firework.