Miralda: “When you are an artist, you have to give things away”

After 16 years without exhibiting in the Senda Gallery, Antoni Miralda (Terrassa, 1942), who recently won the Velázquez Art Prize, is showing the work related to three of his ceremonial projects in New York, Miami and Barcelona.

Miralda is the artistic MC par excellence. He is an artist who has sophisticated and, at the same time, made playful and popular large-scale performances. Collaborative art, participative art, art which parades in the street and which occupies the walls of the museums, art centres and galleries to end up involving many sectors of society. Miralda worked decades ago “in networks”, as he liked to call it – long before it was on the lips of almost every artist.

If the results of Miralda’s projects tend to be spectacular, his working process is no less impressive. You can see for yourself in the exhibition at the Senda Gallery which focuses on three specific projects, with preparatory sketches, objects and relics used in actions, photographs and videos. A back-lit sign over the street door of the gallery, announces some of the “products” that appear at one time or another in the exhibition. “Perhaps from the outside people are thinking we sell sweet potatoes or pine nuts, but that’s fine with me”, jokes Miralda, always accompanied by his inseparable partner and collaborator Montse Guillén, and an enviable level of energy for his 76 years.

We begin with the most recent project, Santa Eulalia. 175, never before seen as it was a private commission by the historic fashion shop in Barcelona’s Passeig de Gràcia on the occasion of its 175th anniversary. Last April Miralda organised a long procession which went from the Pla de la Boqueria, where the shop was located in the past to its current location in Passeig de Gràcia. Over 150 students of drama, dance and design, standard-bearers, 80 musicians and over a hundred guests made their way through the centre of the city in an unusual pilgrimage. “I was allowed to rummage through the company archives and choose the images that I wanted to make the standards. I used the sewing patterns, the architecture of the clothes for the rear side of the standards. At the end of the procession, the image of Santa Eulàlia was projected onto the façade of the shop. Santa Eulàlia was the crucified martyr whose death, according to the legend, caused a great snowfall. I represented this is the action with strips of paper containing Catalan expressions and words related to the textile industry that fell onto the audience. This brings me very close to my Terrassa origins, where it was the textile industry that made the city grow”.

The Miami project, The Last Ingredients, on the other hand, is based on the fundamental pillars of Miralda’s work: food. In this case, the procession in 2016 went along one of the main avenues of Miami Beach, with a public banquet offered by food trucks using the seven basic ingredients of the indigenous peoples of southern Florida, from wheat to crocodile meat, pineapple, palm hearts and turkey. “They are ingredients that have lost their potential over time. In a sense it was a work of historical memory. Also, food trucks are completely prohibited in this area of Miami which is very touristy and has a large concentration of restaurants. We asked the chef of one of the top-class restaurants of the area to work with us in preparing the street food. I think this is in interesting element for reflection”. 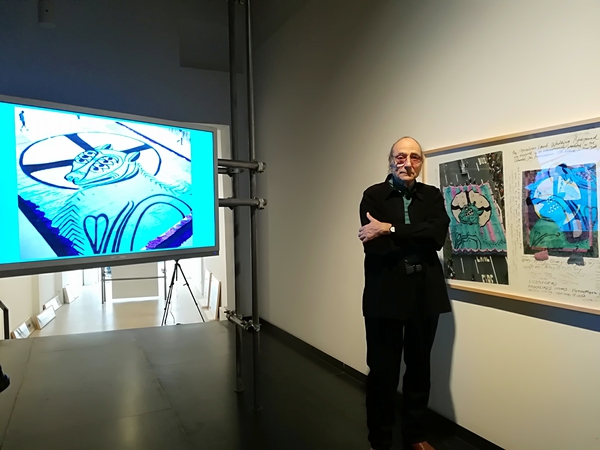 Antoni Miralda in the Senda Gallery.

And now that they have removed the Columbus statues from Los Angeles, it is appropriate that we should look at the oldest project in the exhibition, Apocalypsis Lamb, a parade which took place in New York’s 5th Avenue in 1989 and in Barcelona in 1995, with the 18x15m nuptial bedspread from Honeymoon, the marriage between Columbus and the Statue of Liberty, and one of Miralda’s best-known works. The huge bedspread with the large figure of the lamb of Apocalypse which appears in the Romanesque church of Sant Climent de Taüll, is currently stored in the MNAC but will return to the Oval Room of the museum from 3 to 7 April, just as it was hung in 1995 for the Agnus Dei exhibition about the influence of the Romanesque on contemporary art, curated by Pilar Parcerisas. “It was about time we brought the lamb out again”, says the artist.

Miralda finds it very stimulating that part of the marriage project of Columbus and Miss Liberty is being reactivated. He remembers how during the marriage service in Las Vegas “there were already anti-colonial groups around it and that is fantastic because art has to serve that kind of reflection”.  From the toy soldiers at the beginning of his career to the Food Cultura project, Miralda’s work has always had a very strong political component, but always using metaphors and often a sense of humour. “A work cannot not be political, but I am interested in explaining things from a point of deformation”.

For Miralda, the involvement of so many people in his projects is also a crucial part of his way of working and also that his works arrive directly to his audiences. “I like to know that someone comes across one of my processions by accident, doesn’t know what it is, asks and ends up interested in my work. In that sense my work has a lot of different levels, involving people from an intellectual and artistic background, but also people who do not know anything about it. I will never abandon the playful and festive element of my work because when you are an artist you really need to give things away. Art is not only a question of doing business and selling works in a gallery”, he says by way of conclusion.

The exhibition Miralda. Tres projectes (NYC-MIA-BCN) can be seen at the Senda Gallery in Barcelona until 5 January 2019.