As part of the events for the centenary year of his death, the Museum of Art of Girona presents Modest Urgell (Barcelona, 1839-1919), with all his complexity and contradictions.

Urgell was criticised for showing once and again his landscapes with infinite horizons, lost bell towers, in this “small, ramshackle [Catalonia] (…) this Catalonia that is quiet, sad and alone” with silent, half-forgotten cemeteries. 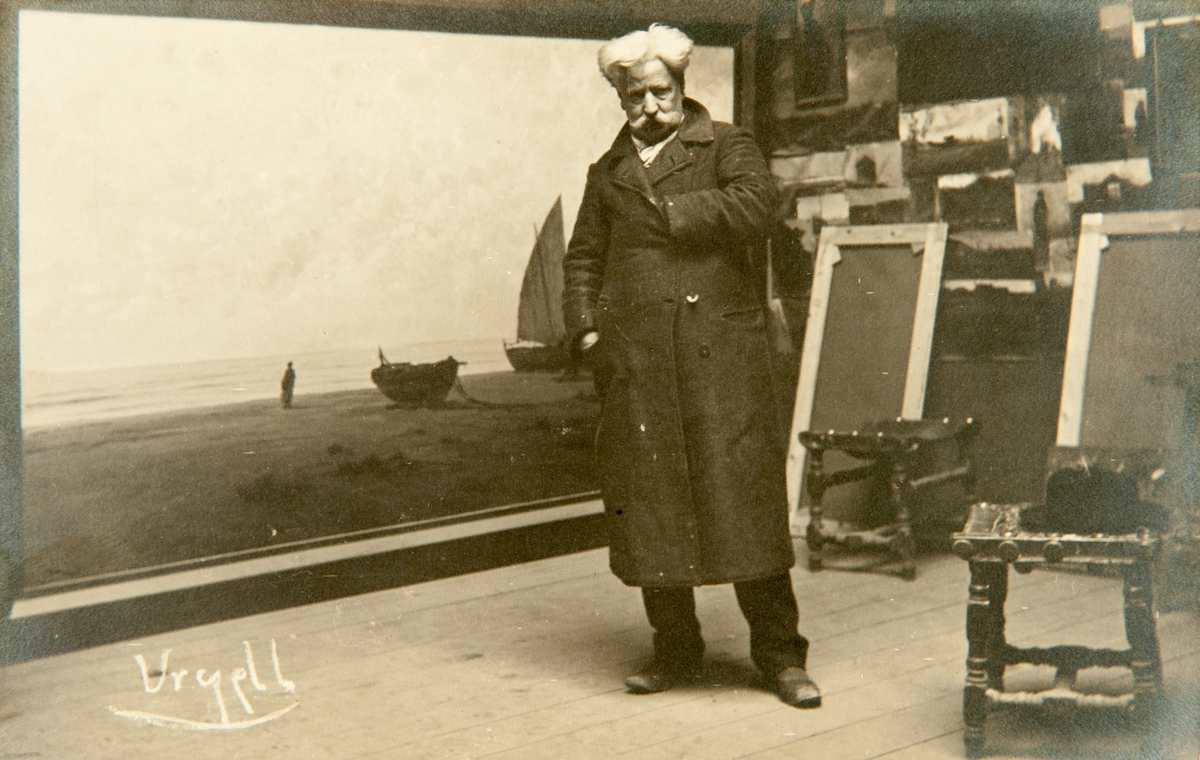 But who was Modest Urgell? What other sides did he have apart from being a painter? Which travels and sojourns marked him? Who accompanied him throughout his professional and personal life? What mark did he make on the younger generation of painters? These are some of the questions posed by the exhibit, curated by Carme Clusellas, director of the Museum of Art of Girona and responsible for the events of Modest Urgell Year, alongside art historian Miquel-Àngel Codes Luna.

There is no doubt that this exhibition opens windows and doors, allowing us to continue discovering and reflecting on key moments from Urgell, such as his stay in Girona between 1860 and 1870, when he produced his cartoon works under the pseudonym of Katúfol. Or his trips to Paris from where he would visit the Berck spa, near Calais as late as 1872, a place that would mark his way of envisaging landscape: that low skyline close to the ground. 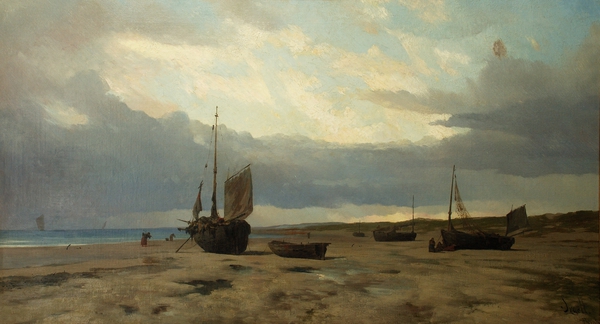 Intellectual discussions in Paris with Camille Corot, writer Alexandre Dumas junior, and the singer Sarah Bernhardt, accompanied by Francisco Miralles, demonstrate his internal maturing and the interpretation which was so personal to him of Catalan landscapes from Barcelona, the Empordà and Ripollès. This vital experience linked him with the sublimity of the Romantics and with visionary symbolists “on the cusp of Modernity” as Clusellas would put it; on the border of what would happen just afterwards with Miró or Salvador Dalí. 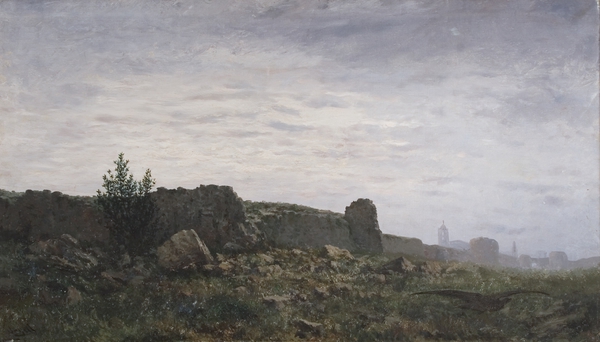 The exhibition includes some of Urgell’s major works such as Coasts of Catalonia (1864) loaned by the Prado Museum to the Museum of Art of Girona, and Boats on the beach (Berck) (c. 1868-1872) from the Carmen Thyssen-Bornemisza collection. The impressive Girona (1880) – from the old Alfons XII collection and currently part of the Royal Collections – constitutes an allegory of resistance by the city of Girona during the 1808 and 1809 sieges which occurred during the French War. The struggle is represented by bare walls and an eagle fleeing from the scene. It is exhibited beside Girona City Walls (c. 1871), painted almost a decade later and in a much smaller format.

Also present is the Call to prayer (c. 1876) – from the MNAC, which would bring him considerable fame and merit the second-class medal from the 1876 Fine Art Exhibition in Madrid, representing his establishment as a painter. From then on, the commissions were showered on him. Another composition that catches the eye and shows us his more theatrical side is Act of faith (c. 1898); in this work there are people dressed in tunics, burning books and a sinister yet enigmatic atmosphere. The vitrines contain the cartoon works, theatre texts and his memoirs, The little gypsy girl or memoirs of a Katufol (c. 1915), The bat. Memoirs of a sacred cow (1913), Catalonia (1905), and the Album “The augury of  a gypsy woman or the story of a Katùful illustrated by the Katùful himself on rainy, stormy nights in the year MDCCCXL” (c. 1918) which are all vital to understanding how he was thinking.

Without his complete immersion in nature, this silent flâneurisme would not have emerged in his abandoned cemeteries and lost churches.

His canvasses and works on paper transmit an interpretation of what he wanted to paint “on first impressions”, in his own words, as we can see with the immense Rocky terrain (c. 1895), from the private collection of the painter’s family or Landscape  (1885-1895) held at the MNAC. With them a reliable identification of landscapes is a gesture that is completely condemned to failure. Even so, Urgell’s wanderings through small towns of Catalonia such as Albons, Ultramort, Campdevànol, Cinc Claus, Espinelves and Vilabertran, to name just a few, were very transcendent;  without that complete immersion in nature, this silent flâneurisme would not have emerged in his abandoned cemeteries and lost churches, with their dense symbolism and steeped in melancholy.

The approach of the exhibition in the Museum of Art of Girona has achieved that “the same old” is precisely not “the same old” Urgell but places his work in a new light, showing enigmas that have yet to be understood. For example, we have yet to find one of the canvases of his wife, the painter Eleonor Carreras Torrescasana. And the exhibition also highlights some of his contradictions: despite his rebellious nature, at the end of his career she was one of the highest earning artists, with a great commercial spirit and focusing on his key moments such as his stays in Paris and Berck. And finally, his legacy continued with disciples and painters of the twentieth century who occupy the last and one of the most interesting spaces in the exhibition. 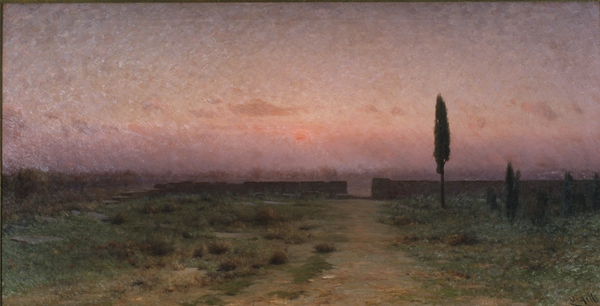 Here you can see the relationship between his work and that of his son Ricard Urgell and one of his followers, Hermen Anglada Camarasa, with Landscape and bridge, from te Library of the Víctor Balaguer Museum in Vilanova i la Geltrú. Of the twentieth century painters the influence on and admiration of Joan Miró is suggested (Miró was his student from 1907 to 1910) in drawings from the Pilar and Joan Miró Foundation in Mallorca. They include a series of direct homages as well as large format acrylic works from the 1970s from the same source. Links between Salvador Dalí and Urgell are evident in The birth of liquid fears (1932). By Joan Ponç Cemetery (1975) is on display. This section also includes the debt of Joan Hernández Pijuan to Urgell with the work Garden with cypress tree (1986).

This is an exhibition which requires time and offers a new interpretation of Modest Urgell, with strands to follow and enigmas to resolve. But more especially it shows a painter who opened up new paths of experimentation to the painters who would mark Modernity in Catalonia. One of them was Salvador Dalí, in whom Urgell’s works awakened a “spatial nostalgia” and made him think of “Böcklin and de Chirico”; or Joan Miró, who admitted in an interview that the mark of Urgell was present through the three shapes that obsessed him: “a red circle, the moon and a star”. Modest Urgell, then, has finally risen above the horizon.

The exhibition Modest Urgell. Més enllà de l’horitzó can be seen at the Museum of Art of Girona until 20 May 2020.