Walking around the Eudald de Juana exhibition at the Museum of Empordà (Figueres) is like walking through a dream. It gives you the feeling that the sculptures are watching you  and that they might suddenly vanish.

In terms of artistic expectations, Eudald de Juana (Navata, Girona, 1988) is a post-emerging artist. You already know that what we previously called “promising young talent” we now call emerging artists. And once you have passed through this deceptive phase where the fizzy bubbles don’t let you see anything in perspective, the consolidation phase arrives – the first phase of maturity. Well it does if you reach it…which is not easy.

Under the direction of Eduard Bech, the Museum of the Empordà  has opted for an annual retrospective to cover that profile: local artists, young but mature, with their own consolidated language. And De Juana, who’s just turned thirty, has finished his Fine Art degree, studied at the Florence Art Academy, given classes and even set up the Geode art space with the painter Pau Marinel·lo – an ambitious project in Navata with studios, workshops and a gallery. 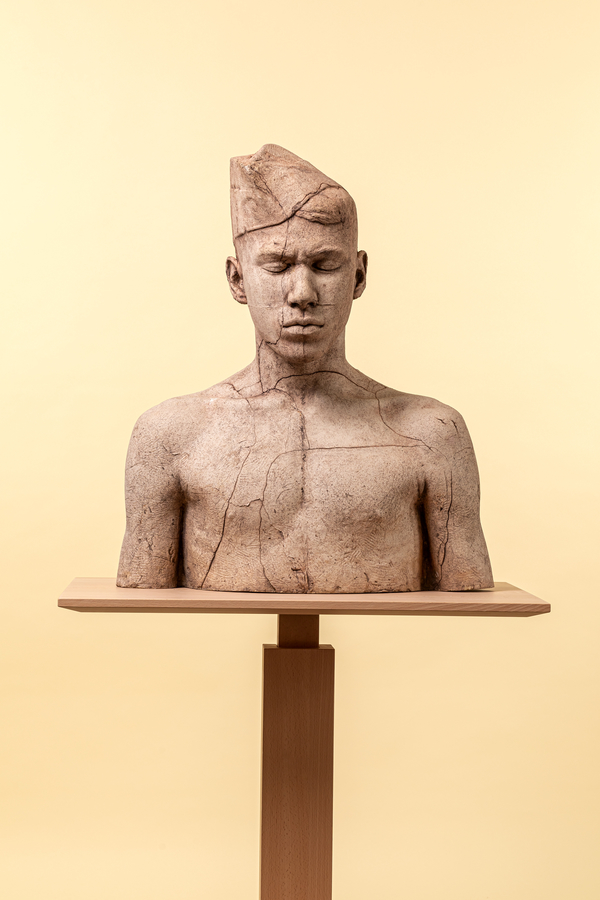 The exhibition Eudald de Juana and the transgression of shape brings together these sculptures, in dialogue with other non-sculptural works by artists from his generation. There are two exceptions: one is a sculpture by Mar Gorriz, his mother: the other is in the section “Rotundity and weightlessness” where there are life drawing by artists from the late nineteenth and early twentieth centuries such as Miquel Blay, who is a reference for Juana, Ismael Smith and Josep de Togores. Another of his sculptural references, absent for obvious reasons, is Rodin. De Juana and Rodin are both great modellers, giving their work form by addition rather than hammer blows.

The exhibition, which is curated by Laura Cornejo and Pere Parramon, is distributed between the ground floor and the first floor of the museum. Divided into seven sections plus an introduction, it shows different aspects of the artist, shrouded in other reflections on the body in the form of a dialogue between artists. Canvases support the theoretical apparatus that justifies each stop on this journey through the limits of the corporal. 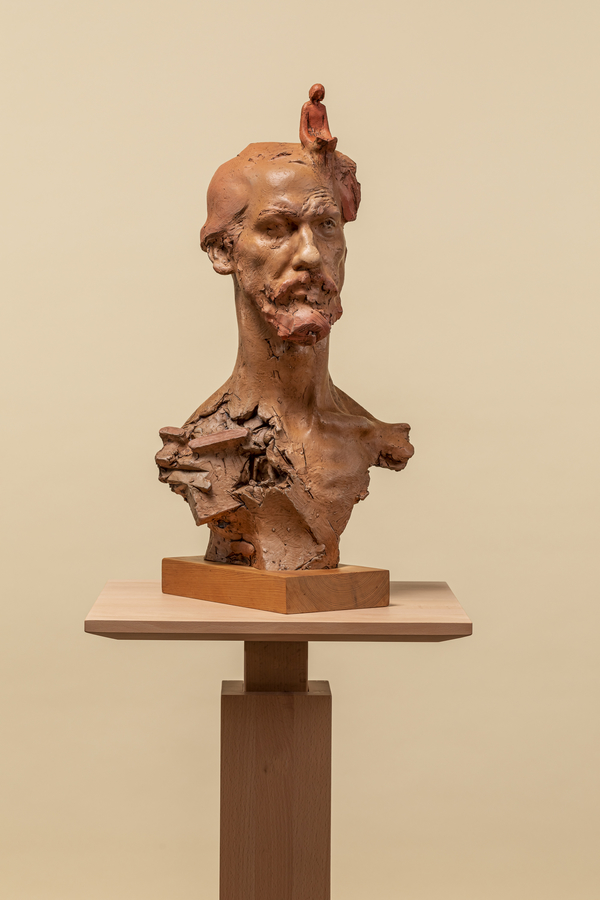 Most of De Juana’s bronze and resin sculptures are from between 2016 and 2018. Their Mannerist style is surprising and makes me think of the kind of solidified dreams of Catalan Modernism that appear on the façades of buildings and delightfully decorative objects.

The bodies are in constant transformation and they sometimes merge with the inorganic. Others are populated or questioned by small figures lounging on them or perched on the head to read a book. Who is reading who?

The textures are interesting, made of parts sewn together, injured skins, forced, spread by the modelling tools. 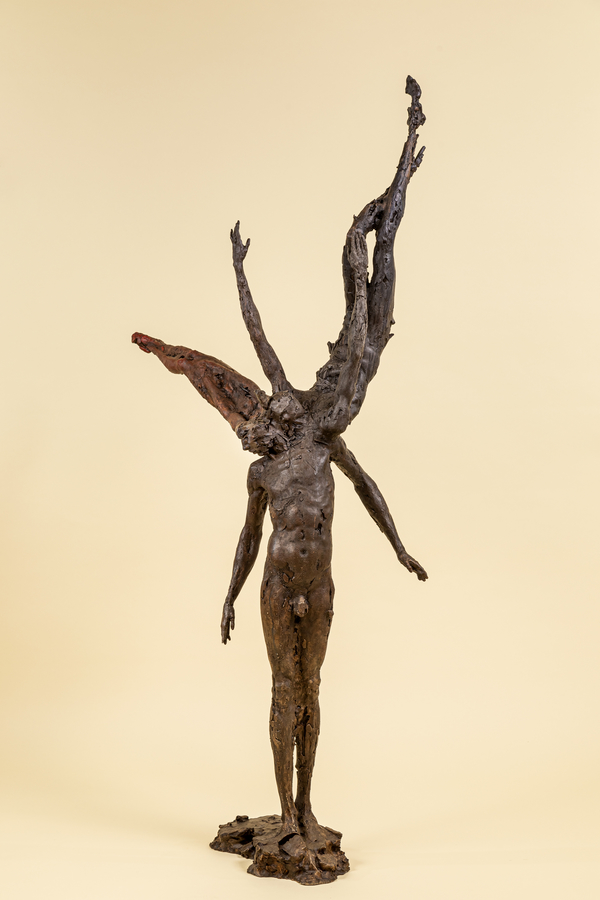 There is one sculpture, Meteor, commissioned by the museum that will not leave you indifferent: you find, more than you see, the body of a young, muscular man with two other bodies on top of him. You don’t see the head anywhere. The accompanying cloth windbreak suggests that it is a “confluence of differences, of individualities that, when they meet, mutually enrich one another and become that diverse tree that we call society”. Well, maybe. Maybe that is what the curators think and also the artist. But you could also say that it represents the current situation in our society pretty well; a society that has not properly dealt with multiculturalism or the acceleration of historical time. We are not just disorientated we are also attacked and transformed.

Faced or in dialogue with Meteor, I am still not sure which, is Beauty (2016), a video directed by Rino Stefano Tagliafierro, which uses completely the opposite process to De Juana: beautiful images of old paintings, very pompier, like Bouguereau – animated using digital technology. However, both pieces feed the disquiet of the viewer. 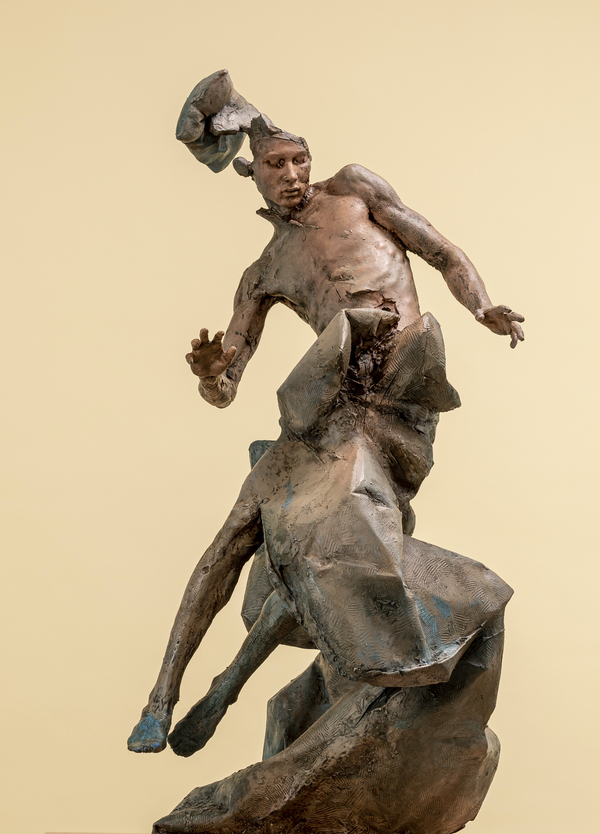 Many of De Juana’s figures are monsters (not my interpretation, there is a section dedicated to them in the exhibition) living in our subconscious. Monsters as ancient as the myths that they tell us, dressed as the nightmares of a modernity which uses technology to burst outside the limits of what is human.

The exhibition Eudald de Juana and the transgression of shape  can be seen at the Museum of the Empordà in Figueres until 12 January.