Reus Museum: If you can’t draw it, then you don’t understand it

The physicist Albert Einstein said, “if I can’t draw it, then I don’t understand it”. One of the fathers of modern architecture Le Corbusier, was unable to give his famous talks without a large roll of paper: I prefer drawing to talking”, he said, “drawing is quicker and there is less room for lies”.

I myself, when thinking about the structure of this article, made a few sketches. The letters, which have become words, that you are reading now are no more than drawing polished over the centuries. Because drawing is such a basic phenomenon, apparently so simple, it is the alpha and the omega of human abstract thought.

That is why the exhibition entitled Black on White, including a sample of the extraordinary collection of drawings at Reus Museum is much more than a simple chronological or thematic anthology.

Black on White has a design (even the word design has its origins in the Italian word for drawing disegno) and covers a series of topics seasoned with quotes by great creators on the phenomenon of drawing. But you can take this exhibit in hundreds of ways. Either as an excellent how of work by Reus artists, or the different aesthetic periods that the art of drawing has gone through over the last two hundred years, or from the multiple meanings of the verb “to draw”.

The exhibition describes how the academies use the drawing of the human body as a basic learning tool (and here we have the life drawings of the artists from Reus from different periods, such as Fortuny, Modest Gené and Ramon Ferran), drawn portraits (and here I wouldn’t know whether to as the younger brother of the painted portrait or as a true and spontaneous way of capturing the essence of a gaze), drawings as a necessary part of designing sculptures (the case of Rufino Mesa’s commission by the Olimpiada Cultural organisation is paradigmatic), drawing of jewels, of temporary structures (such as those constructed for the visit to Reus by Queen Isabel II in 1844), sketchbooks for noting down ideas or findings, with a beautiful example from Fortuny, and drawing as a format for sketching elements that would at some stage form part of more complex works. 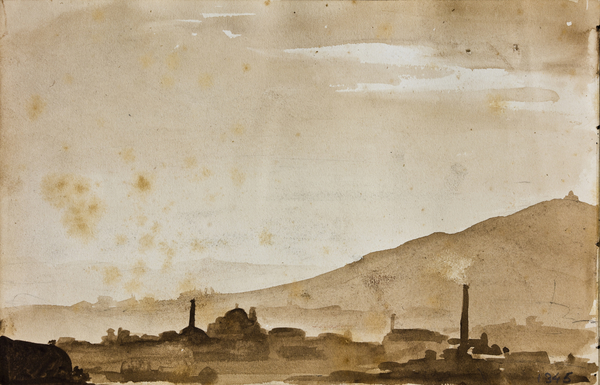 Marià Fortuny, Factory landscape with mountain in the background, 1854-1855.

The exhibition route ends with the latest evolution in drawing from the second half of the twentieth century, with works by Ramon Ferran and the minimalist Joaquim Chancho, among others. 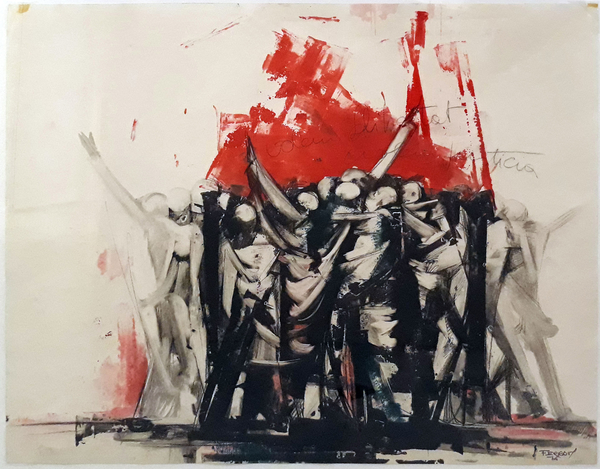 But the exhibition opens with a preamble which demands a close look: a doe carved onto a small piece of slate, from the rock shelter of Sant Gregori, Falset, which is over 10,000 years old. This delight made me think of the 3D film Cave of Forgotten Dreams, by Werner Herzog, which suggests that humanity had already coupled visual perception with drawing as far back as 35,000 years BCE. It seems so natural and so obvious to us, but it is not. Not at all. 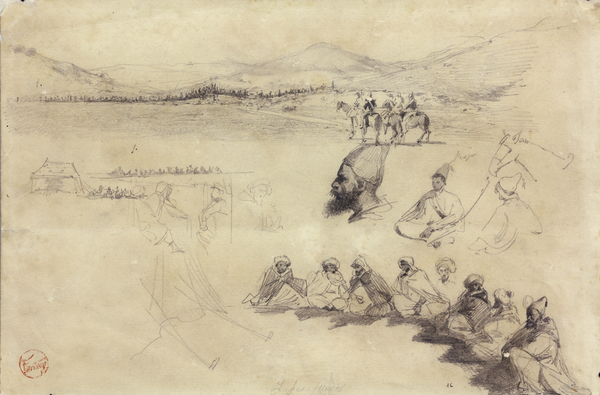 The artist most broadly represented in the exhibition is Marià Fortuny. There are the famous life drawings, of course, but there is also a study for the famous painting Son of the Count, in a small but extraordinary notebook, and several sketches made during the Rif Campaign, where he was hosted by fellow Reus man, General Prim. His studies of the landscape, the Spanish soldiers and the local commanders are extraordinary.

And sharing a space inside a vitrine are four drawing by Reus’ most famous son: Antoni Gaudí. A small sketch of his design for a vitrine for the Comella glove manufacturer and destined for the Universal Exhibition in Paris, a sketch of the Vicent Garcia centenary parade, handwritten notes accompanied by drawings of Jacquards, capitals and other architectural elements. But the most impressive are some of the notes he made about plants. Nature was Gaudí’s great teacher and you can see these same lines in many of his architectural works.

And at the risk of making a biased choice, I have to highlight the magnificent portrait of Eduard Toda (the Catalan Indiana Jones) by Ramon Cases, several studies of boats by the highly talented Hortensi Güell, who at the age of just twenty-one killed himself for love, works by Josep Tapiró, Baldomer Galofre, a drawing from Guinea by Modest Gené whose frenzy is reminiscent of the precubist Picasso, and cariacatures by Ramón Bonet (BON). 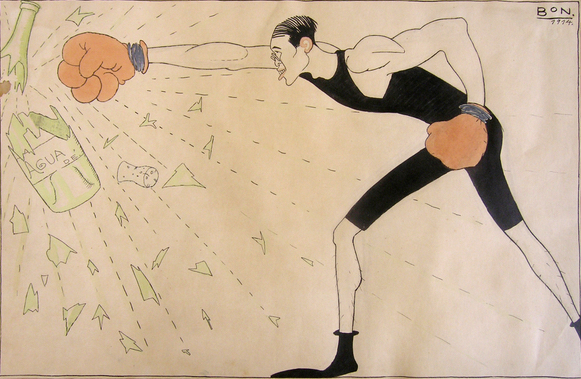 There are ten thousand years between the does scratched into the slate and two anonymous drawings for advertising for the La Nueva dry cleaning firm. But the concept remains exactly the same.

The exhibition Black on White. The Reus Museum Drawing Collection can be seen at Reus Museum until 30 May 2020.