To celebrate its 25th anniversary as a space for the promotion of emerging art, La Capella is exhibiting a project which goes in episodes.

Les escenes. 25 anys després opened at the end of January as an exhibit which is unfolding like a TV miniseries with six episodes. Thirty-odd artists are involved and the project will be continuous until the end of June, with works overlapping, other which are being made as the episodes go on and yet others which only appear once during the whole process.

The pilot episode acted as the presentation of the project, curated jointly by David Armengol, Sonia Fernández Pau, Eloy Fernández Porta, Sabel Gavaldón and Anna Manubens. This first exhibit, which is the most minimalist, left a whole series of question marks on how the project would continue. Which is why we promised you that we would continue talking about the process at one time or another.

Now, the exhibition has reached the fourth episode, with a dozen works in very different formats, including performance and fanzines. Those who have visited the previous three episodes will be very familiar with the sculpture Brazos, chorros, mismo II, by Julia Spinola – a large piece of cardboard which is an evolution of Fardo from the first episode. Just as Spinola’s work is in a process of mutation, the book by Marc Vives, Melodramas, is a book of youth which is being rewritten, complete with a pen beside it in case the public want to take part. Another sculpture placed on the floor forms a strong piece in this fourth episode.  Les pedres del camí, by Anna Dot, in a 3-D materialisation of the mistakes made by Quixote in the novel by Cervantes, in honour of the expression “two trip twice on the same stone”.

The fragile border between reality and fiction in contemporary society.

Painting is present this time with three works by Pol Gorezje,  made from photographs, which are a critical version of the genre of the male nude. Especially interesting, even though they initially seen unrelated to the general theme of the project, are the paintings by  Rasmus Nilausen, especially Poliglosia, which, like the works of Gorezje, provide a view through the surface of the canvas. The fragile border between fiction and reality in contemporary society, especially when cheap exhibitionism comes in to play, is reflected in celebriMe, by Jon Uriarte. For some time now Uriarte has been posting on Facebook supposed image of himself next to celebrities in the new version of autograph-hunting. Looking at these images accumulated on the walls and on the floor is a clear manifestation of the absurdity of the phenomenon. 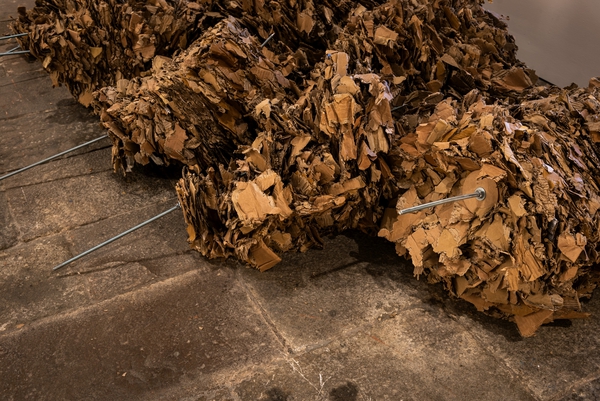 As a metaphor of working processes and the exhibition of contemporary practices, and because of its organisation in episodes, Les escenes is proving a very intriguing show so far. It is a shame that there is not more of a central theme between the works which would give more punch to the argument and the production.

Les escenes: 25 years after. Scene 4 can be seen at La Capella in Barcelona until 5 May.