Our Artistic Relationship with Technology

Our simple relationship with technology is the exhibition organised by Mobile Week Barcelona 2019 as the star event in its parallel cultural programme. This exhibit is a reflection on the digital transformation of our society through 14 works by international artists.

All of us without exception enjoy meeting the artist. Inverse triangulation by Solimán López is not seen in its totality in this exhibition but it does reveal its position in this precise moment.

The installation is a nod to the famous performance by Marina Abramovic Where is the artist? in which the author’s voice is recited with a metallic voice every 4.33 minutes, in homage to the work by John Cage. Th reading of the coordinates, together with the view of the floor projection offers a ghostly corporal presence which is not actually there but is constantly localised. Converted in data, the body of the artist cannot cease to be present: technology does not allow absences.

The exhibition sets out from a competition which challenged artists to reconsier the everyday relations between humans and technology, with a particular consideration of Artificial Intelligence.  “Far from describing simple connections we seek to trace mutual influential relations which are often not evident in daily life”, says the coordinator of the project, Amanda Masha.

Following an intensive selection process (almost a hundred projects presetned), the exhibition includes 14 works by well-known Spanish and international artists whose apparent simplicity, and in many cases, humour, does not prevent us from approaching the subject of technology in all its complexity.

Obviously, the generation gap influences the way in which the visitors see the work. Those born into in the digital arts will be quite comfortable with data streaming, cryptocurrency, digital identities ad Artificial Intelligence. On the other hand, those who have lived through the analogical pay more attention to the information posters than to the works, hoping and praying that the words on the wall can offer the key to understanding works which actually are easier to grasp by simple intuition. So, on the one hand there are those who try to relate to the works even though they may not be works which require interaction with the public. And then there is the static viewer who prefers to understand the piece from a safe distance, critically analysing it or rummaging through their knowledge of art history for some kind of relationship which leads them back to traditional aesthetic canons.

Maybe technology has transformed art and also its audiences.

In the words of Aristotle “the truth is in the middle” in his reflections of the Being and Becoming, maybe technology has transformed art and also its audiences. The work is no longer something unalterable but something which evolves and has a “becoming” which depends on its interaction with the viewer, by whichit enriches and gives added meaning and value to its presence. 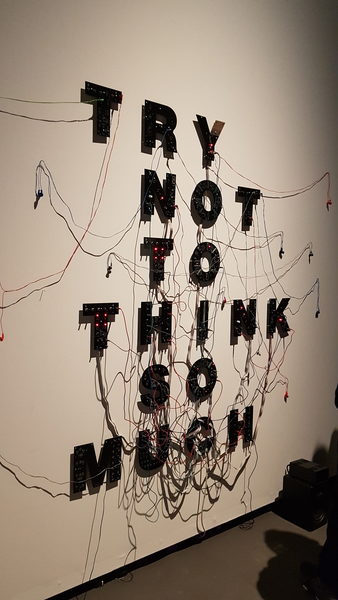 Eugenio Ampudia, Try Not To Think Too Much.

All the works like of Try Not to Think Too Much by Eugenio Ampudia offer this sense. It is an interactive sculpture which emphasises the side of art as an effective means of communication, playing with the paradox of interrupting communication through noise, which the audience generates by interacting with the circuits of a deconstructed sythnthesisor. The piece is one of the Colección BEEP de Arte Electrónico and  one of four in the show alongside Luci by José Manuel Berenguer which reproduces the self-management system of the south-west Asian  lights, Gust by Daniel Canogar, a dynamic canvas which turns into real time according to the direction and intensity of the city in which it is intalled and Tycho: Test One by Paul Friedlander, which shows the pioneering research of Tycho Brahe, the first astronomer to see the refraction of light, and his intellectual heir Johannes Kepler. 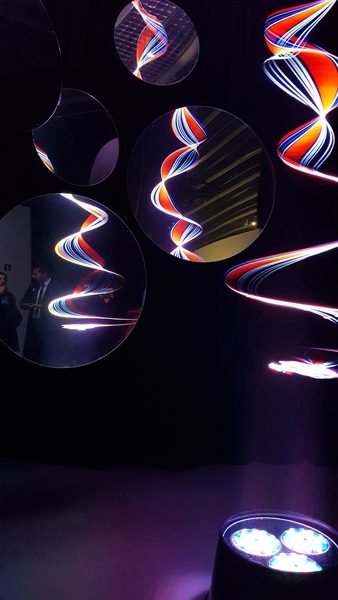 Among the most compassionate works, the installation Data gossiping robots by Mónica Rikić, shows a community of neighbours where small robots exchange gossip taken from social networks. The work looks at privacy and the use of technology as a generator of collective intelligence, and forms part of a long-term project on robots, Artificial Intelligence and social relations. It also deals with the collective intelligence of Pos-society by Fidel García Valenzuela which takes a new look on the concept of mass media and the model of information control established by power regimes. Other related projects are Environment Dress 2.0 by María Castellanos and Alberto Valverde, the contradictions of Bit currencies and their energy needs (Bittercoin by Martín Nadal and Cesar Escudero) and the relationship between human beings and the Smartphone (MatchPhone by Adriana Tamargo and Guillermo Escribano).

The exhibition Nuestra sencilla relación con la tecnología can be visited in the Museu del Disseny de Barcelona, until 16 March.