The Runway of Awareness

“What a drag”, he said to me a year ago. “I know what I’ll see even without going”, he says today.

Once again this year I ask the same photographer friend a favour: to accompany me to the World Press Photo (WPPh) exhibition. But this time I notice him a tad less apathetic. He knows what he will see. But above all he knows what he will say to me, and I see his is keen to say it. He loves photography too much to tell me what he thinks. 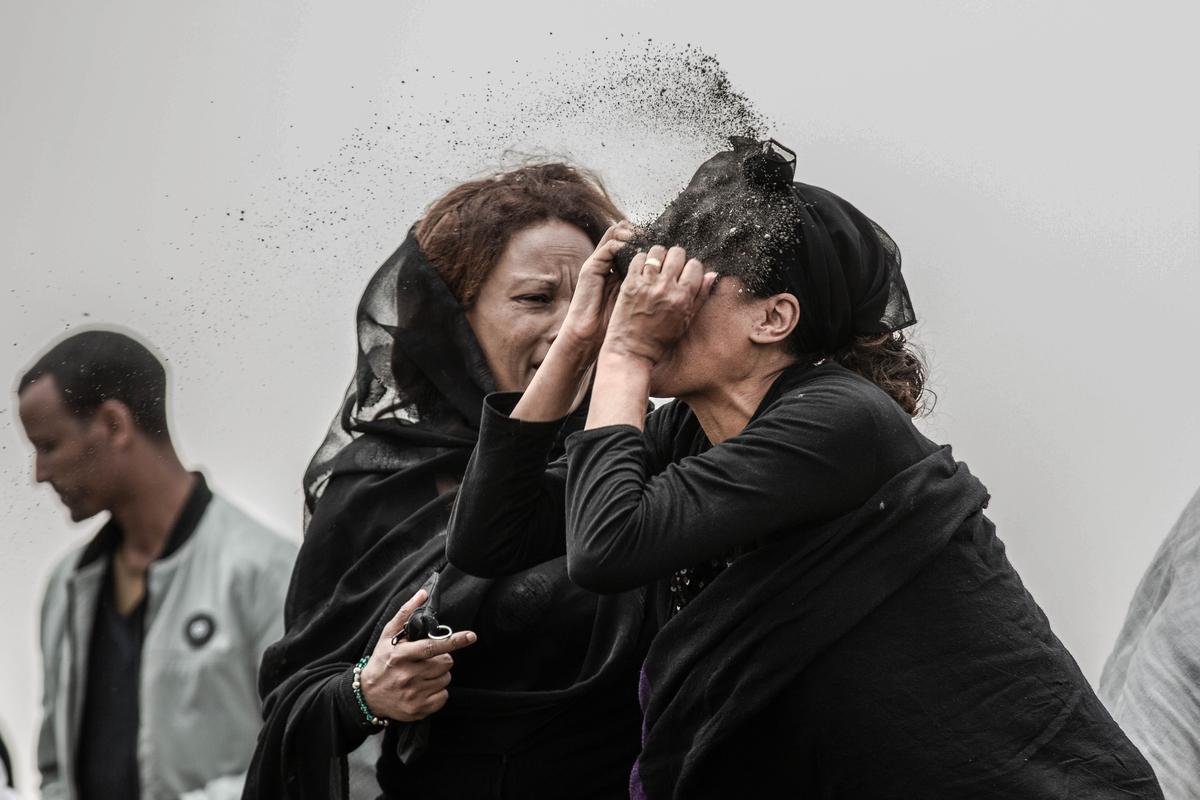 –Hey! Are we going to see art? I ask him as we go down through the Eixample towards the CCCB.

–What is it then?

–It is the world. Is the art world? Does aesthetics describe the world? In photojournalism they are addicted to aesthetics and the best aesthetic is no aesthetic.

–But we need aesthetics to transmit pain, I say. There is nothing that has done more to describe the Holocaust than Schindler’s List – a purely aesthetic movie, isn’t it?

We go into the World Press Photo and my friend starts shooting off (photographers always shoot) in front of the work by Muguleta Ayene, finalist in the Story of the Year:  relatives of the passengers of Ethiopian Airlines flight ET302 in the place where the aircraft crashed.

–Look at how the people are crying. He’s used a telephoto and probably from the pool. The relatives don’t know they’re being photographed. You have to cover these stories and there are arguments for why these photos should be published even though the people in them don’t like it.

What is the point of hanging these photos on the wall a year later?

–So, what’s the problem?

–I can understand them publishing them at the time of the news but what is the point of hanging these photos on the wall a year later? Here and now it is not the news that rules, it is the beauty. You can do a story with a telephoto lens! It’s just business.

Is a photograph published in a newspaper the same as one hung in a museum? Do changes in the context and the timing change the meaning of the image? I ask myself standing before these beautiful images of people suffering.

And we come across an image by the photographer Mark Blinch, first prize in the sports singles: everyone fixed on a basket by Kawhi Leonard in a game between the Toronto Raptors and the Philadelphia 76ers.

–Blinch has caught THE MOMENT, says my friend. Everything is happening in this image. That is what they taught me when I studied photography. The reading of the image, its path, as if you were reading it: you start in the top left, turn your gaze to the right and then down to the left and then the right. And if the photo is good, you do it again. Again and again. 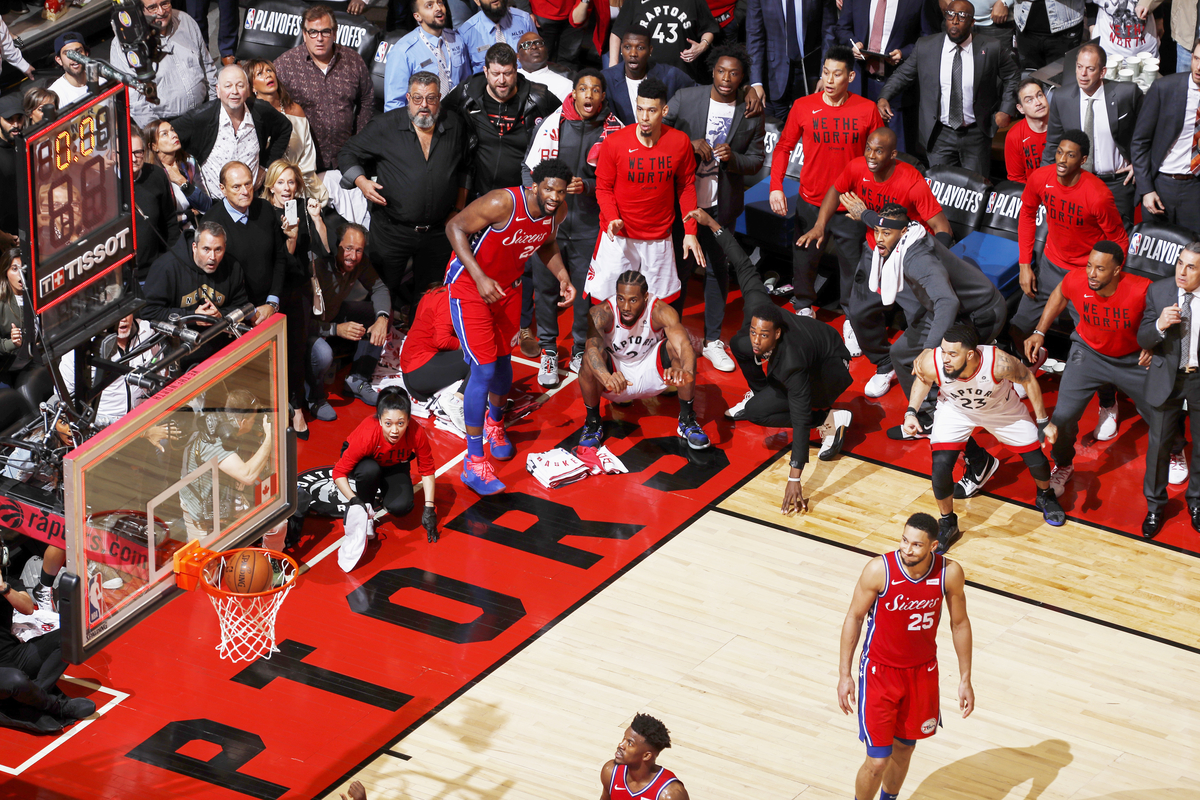 I apply my friend’s lesson, circling my gaze on Leonard’s basket and I see what I already knew: great photographs are those that have more than one photo in them. Those that can capture more than one instant.

Next to the framed image of the basket hangs the second prize for Sports stories: a work by Olivier Papegnies of a women’s football team in Benin.

–The Sports stories always contain extra-photographic components, stories of African survival. As if there wasn’t anyone depressed in Sweden, says my friend.

I am drawn towards a black and white photo of the Taliban. As I approach I feel at home with it. It is a work by Lorenzo Tugnoli, first prize in the Contemporary Issues category.

–I don’t know. We are not notaries. And this is not a black and white notarial sentence. 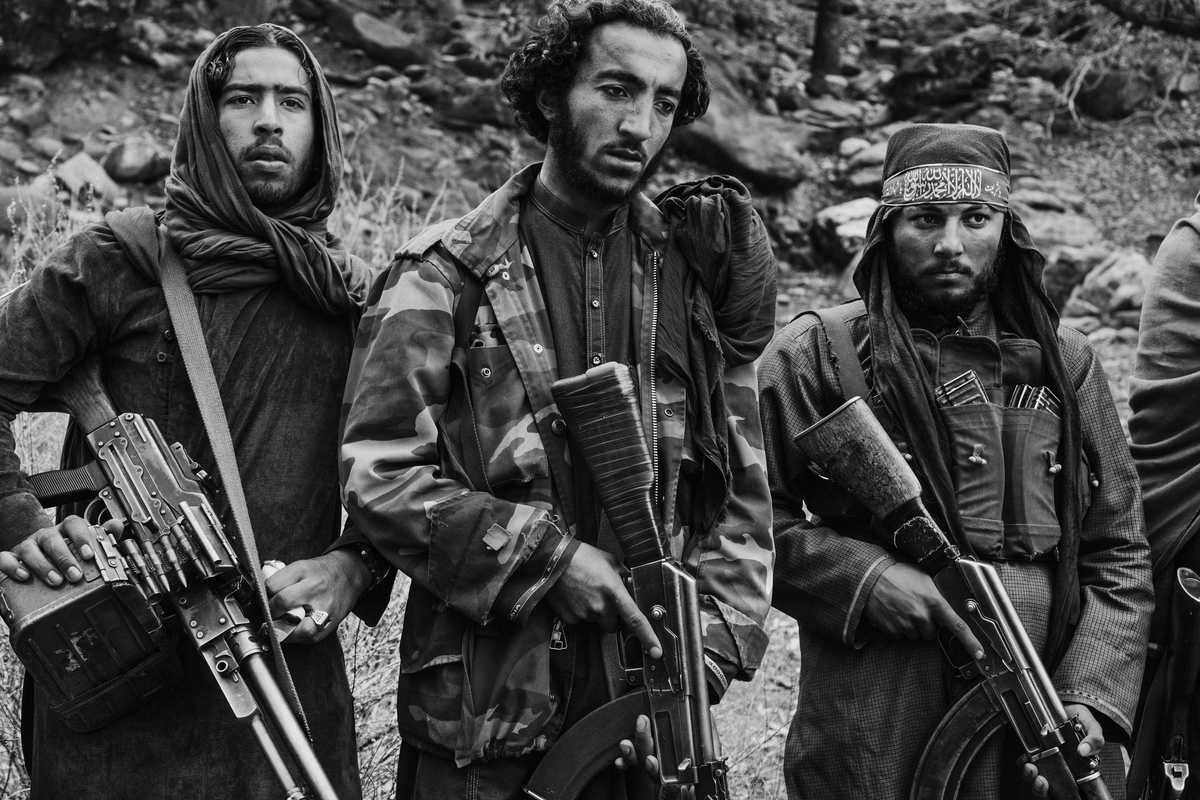 –What is the best photo you’ve seen up to now?, I as hi in the middle of the exhibition.

We stop in front of the photographs by Romain Laurendeau, rebel of Algerian youth and first prize in the Long-Term Projects category.

–Perhaps it is too charged for a black and white, but it is a great story. it is really sold. He didn’t do that in a couple of days. Looking at his work I don’t get the impression I’m being taken for a ride. 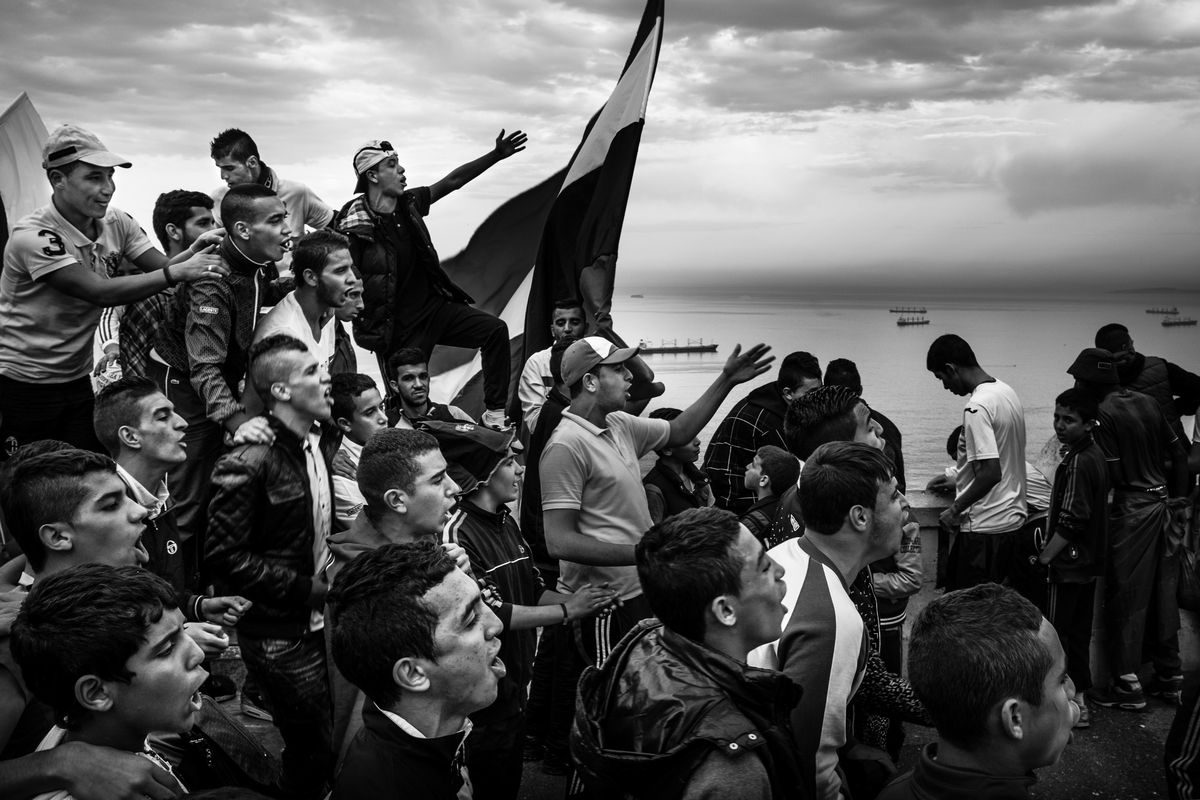 Romain Laurendeau, Kho, the Genesis of a Revolt.

And at that point, the point of being taken for a ride, the virus appears.

There is no medic or funeral worker who has the same anxiety as the photographer. They understand their work.

–You mean because of Covid?

–I mean because of Covid as a career. Let’s see who photographs the first death. The first coffin. The word is anxiety, There is no medic or funeral employee with that anxiety. They understand their work. And we should work like they do.

I close my eyes and imagine the journalists working with the seriousness of the funeral workers: that would be the absolute, definitive truth. It wouldn’t be bad.

–But you’ve taken photos of the pandemic and you’ll present them in competitions, won’t you? I ask.

–Yes. I am very proud of some of my photos, but I haven’t made a story of the pandemic. I just haven’t, he insists. I swear that if I win I will be critical because I know that none of my photos is the best there has been.

–Isn’t anyone getting it right?

–The United States, for example, took a while to get into Covid, but they are really powerful. They have a tradition; they have photographic culture. The document themselves beforehand. They’re coherent, methodologically coherent. And they have editors. Not like here. We take a leap in the dark. We go to demos and take photos without asking ourselves why they are demonstrating, more interested in how the photo will come out than what we are saying with it.

–Less showiness and less weeping from one set to the next.

The directors of this year’s WPPh tell us that the images are in a way announcing the world of Covid, even though the photos are from 2019. But frankly the only relation with the Pandemic that I can see is in the second prize of the Nature category: it is a photo of a pangolin, that lovely creature suspected of being the origin of the virus, and photographed before the virus by Brent Stirton. 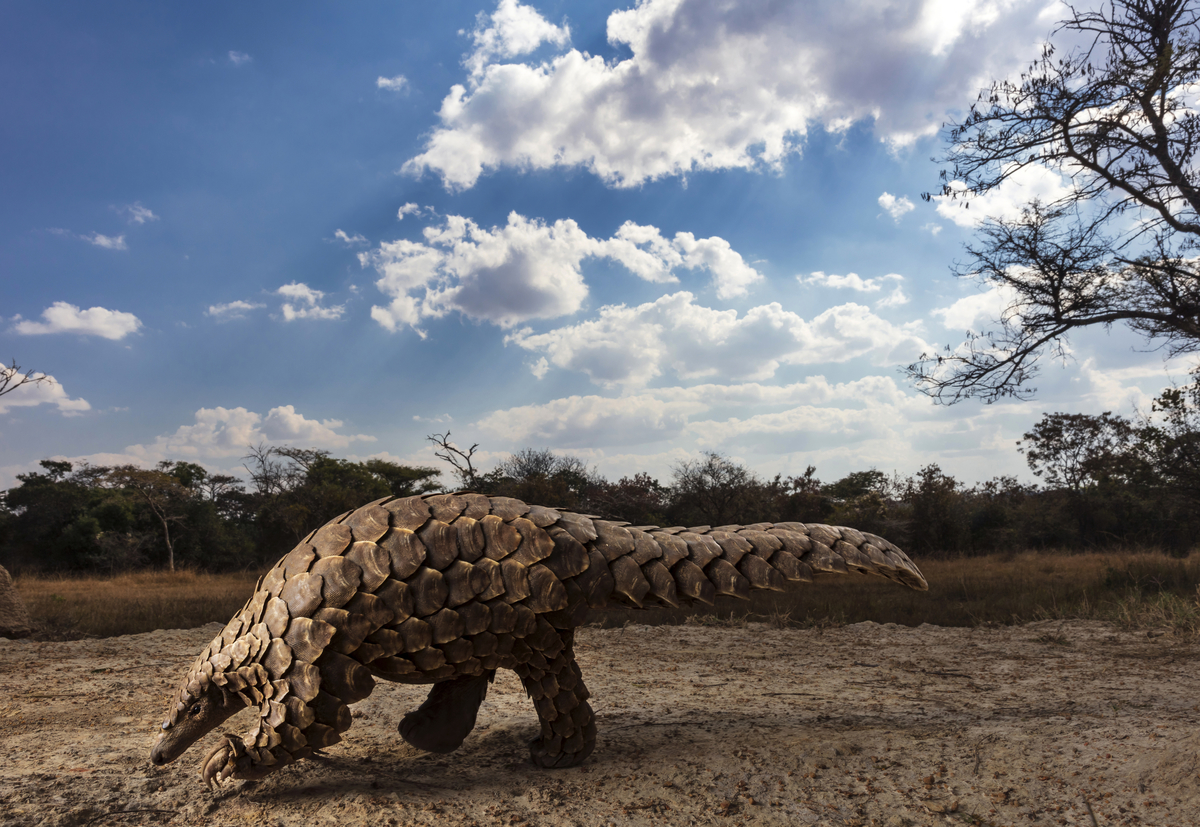 And finally we reach the winning photo, a work by Yasuyoshi Chiba: it is a boy, illuminated in the night by mobile phones and reciting a poem against the military government of Sudan.

–Shoot, I say to my friend.

–The photograph is technically correct. But is this really THE PHOTO of the year? 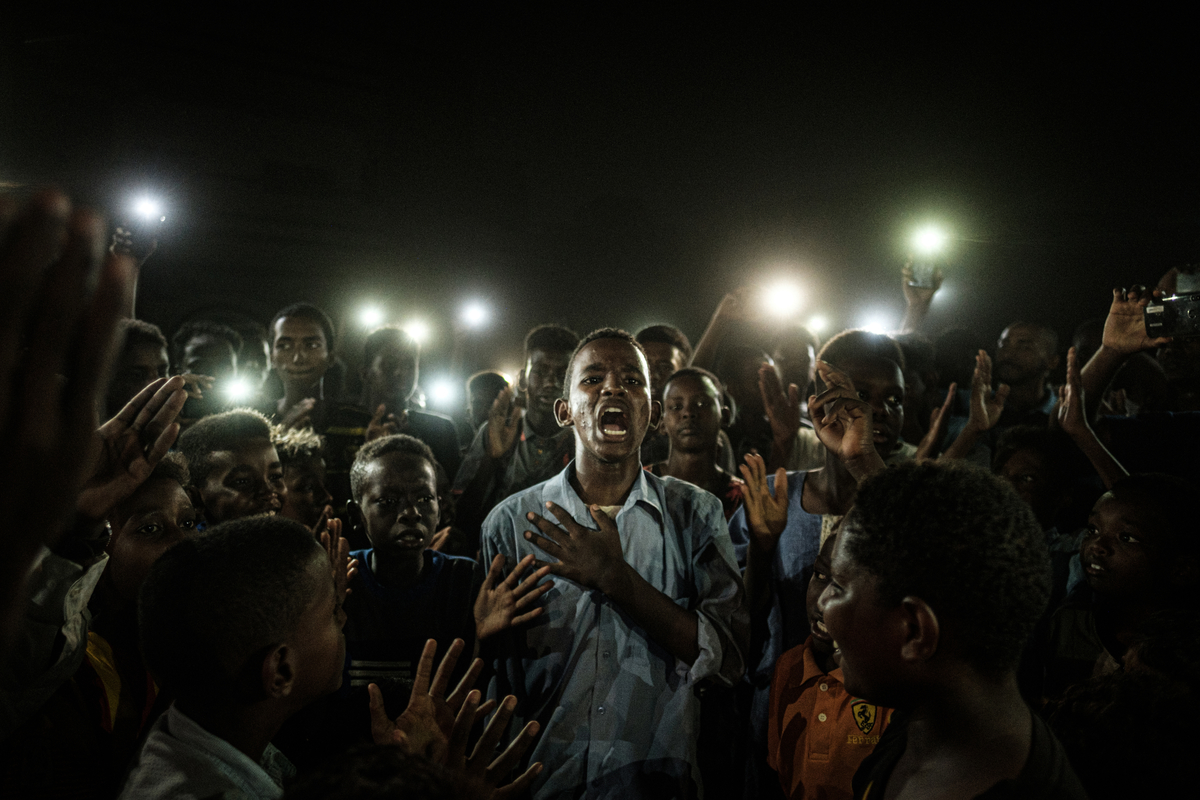 –When the awards season approaches, everyone’s nervous, my friend lets slip. The ego, isn’t it? The awards are too high up the agenda.

And their own way of seeing things, I add in my own thoughts.

My friend – “listen, I’m going to tell you about the juries” – takes me directly to the photographs by Maximilian Mann, finalist in the Environment category. The disaster in Lake Urmia in the north-west of Iran: the sixth largest salt water lake in the world is drying up.

In front of the images of the non-lake my friend  searches for something in his phone and shows me. Mann is accused of plagiarising the work of the Iranian photographer Solmaz Daryani, but the jury of the WPPh has rejected the report. All very surprising when you look at the images side by side.

–And then there is the hashtag pandemic of camera makes on the photojournalists’ Insta pages, my friend tells me.

–There are sulphur mine works paid for by camera hashtags. Do the miners who inhale the sulphur get paid anything for the hashtag? They’ll tell you that somebody has to raise awareness… But are we doing that? Look, it’s been five years since Aylan drowned, and has anything changed? I don’t know. It needs to be rethought. Something is not working.

–So, everything that you’re telling me, do you talk about it with other photographers?, I ask him as we walk towards the Boqueria market.

–Who the hell do you want me to talk to about it?

–Are you able to tell me what you have seen in the exhibition? What did you understand? What’s new? I have seen something dying, something which has not understood in which direction the world is going.

–Should we get rid of World Press Photo?

–Absolutely not. It is completely necessary. But photojournalism in this format is in crisis, there is a lack of format and editing. It is not an exclusive problem of the WPPh. The format doesn’t communicate anything and we’re not going to raise any awareness going down into a room to look at 20×30 photos.

–And so why do you keep on presenting yourself on the runway? I ask.

–Because it is part of my job. And for my ego.

We sit in the Pinocho bar in the market. While we are eating we talk about his two children. He tells me that the little one, at the age of six, is at the stage where she is wondering about death.

–A few days ago she asked me if I would be the first of the four of us to die.

–Are they aware of what death is?

–For them it just means to be radically alone.

That is, without a doubt, the most profound and disturbing photo that today has presented before my eyes.

[World Press Photo 2020. International photojournalism exhibition, can be seen at the CCCB in Barcelona until 20 November.]