What has more value, a Miró or a Dalí?

The other day, while filling the silence of a long car trip, a friend asked me: “What has more value, a Miró or a Dalí?”

It is the typical dumb-cheat-question. So my answer was just as vague: “It depends.”

It depends on whether we compare techniques, medium, dimensions, chronology… A lithograph by Dalí from 1976 is not the same as an oil painting by Miró from 1924.

Artprice.com, which registers art auctions around the world since the 1980s, shows 482 auctions of paintings by Dalí against 793 by Miró; 25,890 engravings by Dalí versus 29,230 by Miró; 3,585 drawings and watercolors by Dalí against 2,481 by Miró. Very similar figures. On the contrary, there are 7,101 auctioned sculptures and objects by Dalí, versus 489 by Miró.

At price level, there is no comparison. From 2011 to 2018, the top ten surrealist auctions were dominated by Joan Miró paintings, who occupied seven positions, including the first two. Dalí is number nine on the list. Let’s see some of the auction prices (to which we must add a commission of approximately 20%):

Joan Miró is the most sought-after Catalonian artist in the world. Dalí is the most popular.

Conclusions? Joan Miró is the most sought-after Catalonian artist in the world. Dalí is the most popular. Almost always, these works go to private hands. In the case of Joan Miró, it is strictly so. In the case of Salvador Dalí, his Foundation has had the economic capacity to acquire very interesting works, and it has not missed opportunities. The most expensive oil that has entered the Teatre-Museu is Enigmatic Elements in a Landscape (1934). In 2011, it paid 7.8 million euros (about $9.2 million dollars). In 2017, the Dalí Foundation bought the extraordinary oil painting Figure in profile (1925) at auction in Bonham’s for 1.75 million euros (about two million dollars). But they have also bought directly from individuals on numerous occasions.

In Artprice’s Top 500 artists list of 2019 classified by sales volume, Joan Miró occupies number 36 (with $62 million dollars invoiced) and Dalí number 94 (with $22 million). The list is presided over by the usual, Picasso, with $346 million dollars ($55 million just for a single work). Both Miró and Dalí have seen their prices rise continuously in the last twenty years. 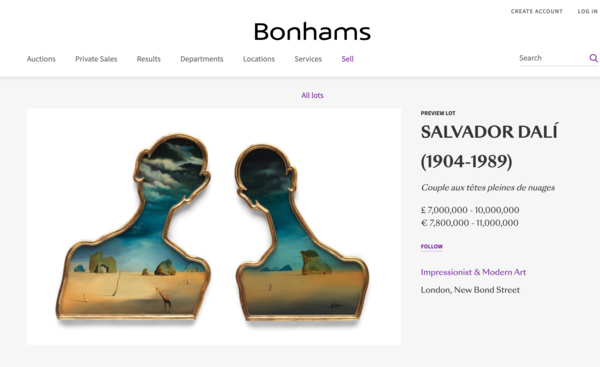 And since we have mentioned Bonham’s, on October 15, at the Impressionist & Modern Art auction, the double oil painting Couple aux têtes Plein de nuages (1937) will go on sale with an estimate of between 7,800,000 and 11,000,000 €. This emblematic oil painting is the property of the Fondazione Isabella Scelsi, in Rome, and was on deposit at the Museo d’Arte Moderna e Contemporanea di Trento e Rovereto (MART). Unfortunately, the Gala-Salvador Dalí Foundation will not be able to participate in this auction, given the serious economic situation it suffers.