Although Rembrandt was an indefatigable worker, recent research has suggested that this figure should be reduced and that he should not be credited with so many pieces. Needless to say, the prints represented a significant source of income. During the almost fifty years of his artistic career he made biblical prints, prints with self-portraits, print of the poor, prints of the rich, prints of everyday scenes and many more. 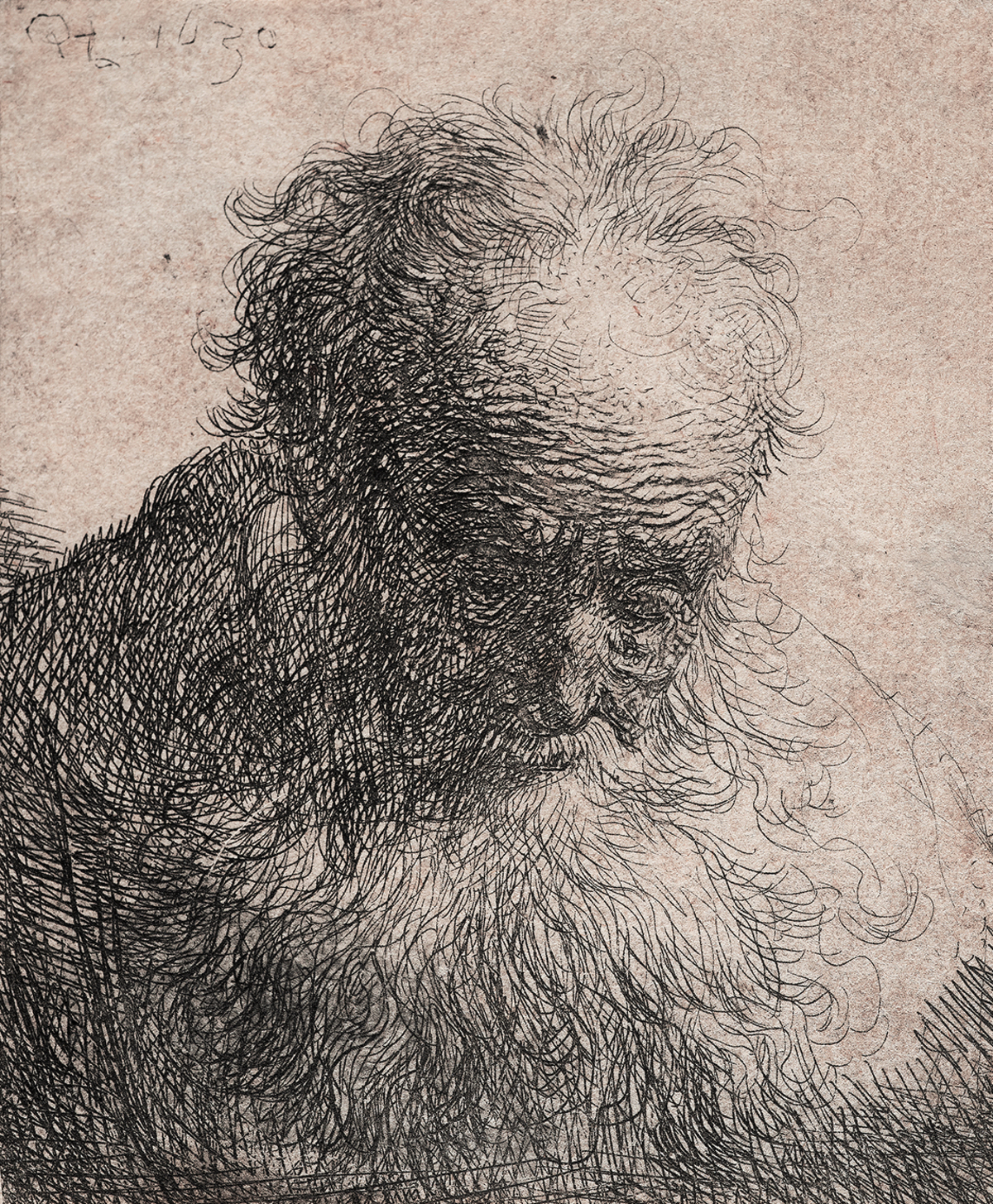 Life went on in front of his studio in Amsterdam at the same speed that the traders’ barges entered the city’s canals loaded with eastern wonders: marvellous brocades, unbelievable silks and luxurious golden vessels which would fill the mansions of the Dutch traders and bankers. Rembrandt loved to include all this wealth in his oil paintings, where he often portrayed himself as a prince.

A part of this world disappeared when the tulip bubble occurred in Holland in 1637 – the same kind of bubble that we often see in the markets today. Forty tulip bulbs had reached a market price of 100,000 florins. And a single bulb, the Semper Augustus, reached the jawdropping price of 6,000 florins when the average annual wage at the time was 150 florins. So it would seem that the concept of bubbles (nowadays they would be bitcoins instead of tulips) has existed for centuries. 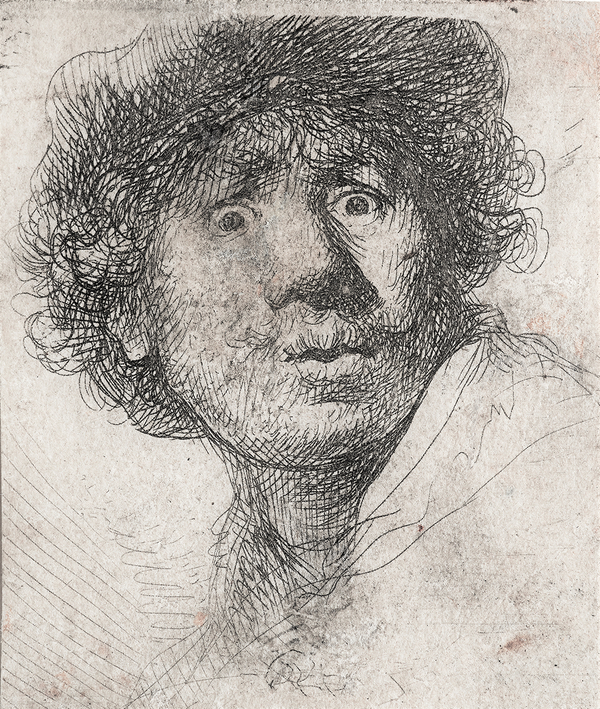 A visit to this sober and well-selected exhibition of prints from the Furió collection at the Cultural Centre of Terrassa makes you realise that Rembrandt considered some of the lighter aspects of life at the time extremely boring. The small etching The golfers (1654), made when he was forty-eight years old, is one example. 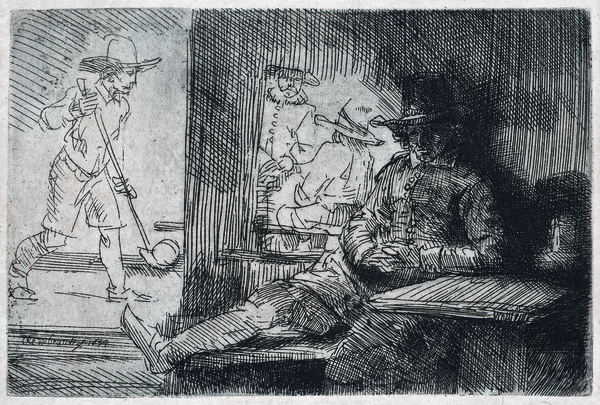 A man, comfortably seated in the shade of a tavern, one leg resting on a chair, observes us. He has turned his back on the young men playing golf, or some other ball game similar to hockey, and with a tired look he seems to say, “don’t call me over”. This is all the evidence we need to see that Rembrandt was a genius in human expression.

His parties and his lifestyle were crazy.

We can safely say that the artist preferred a rather different kind of amusement. It is well known that he was a famed bon vivant. His parties and what we would now call his lifestyle were crazy. Often short of a few florins, despite the fact that he was not short of commissions and his art was very popular in seventeenth century Holland his pockets were in holes. He moved house twice and bought all manner of exotic objets including Roman busts and Japanese samurai armour) which often appeared in his canvasses. But this hobby along with the expense incurred was his financial downfall.

The situation improved somewhat in 1634 when he married Saskia van Uylenburgh, who brought to the marriage a substantial sum of 40,000 florins – a small fortune at the time. For his part, Rembrandt invested in huge parties and good ale. 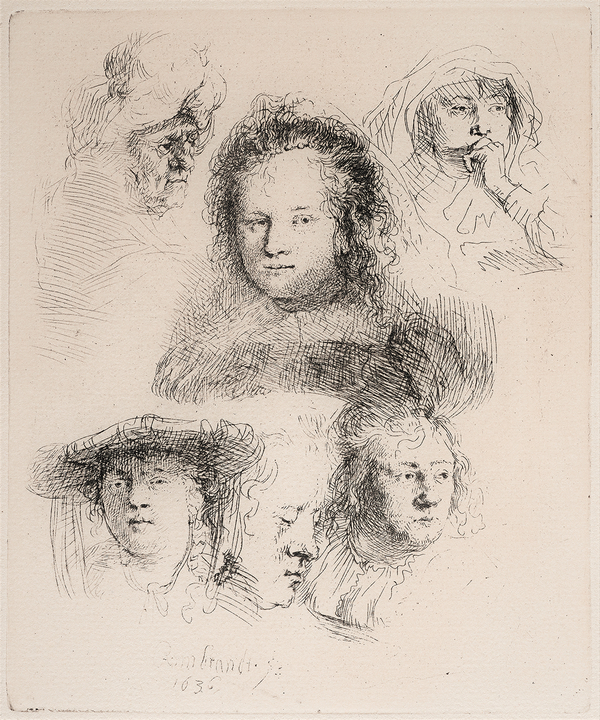 He painted Saskia’s portrait many times and the exhibition contains an etching in which she appears on five or six occasions. Saskia died of tuberculosis in 1642. She was twenty-nine years old and had been married to Rembrandt for eight. Sic transit gloria mundi.

Rembrandt outlived her for another twenty-seven years and still had time to continue producing oils and etchings despite the omnipresent creditor and his debts. He owed so much money that his parents had to hide him on more than one occasion and put his studio in their name, with Rembrandt appearing as a mere employee.

The exhibition Rembrandt. A Genuis of Print can be seen at the Centre Cultural Terrassa until 24 February 2019.