Saliva, Sweat and Blood at the SÂLMON Festival

The SÂLMON Festival, which is in its seventh year with an extended programme, is always a stimulating event for measuring the pulse of new tendencies in dance, performance arts and contemporary live art.

The binary structures which mobilise a good part of our thinking and organisation of experiences are hard, rigid, static, chauvinist. So we arm ourselves with degreasing fluid to approach one set of pieces to be enjoyed at the SÂLMON Festival. 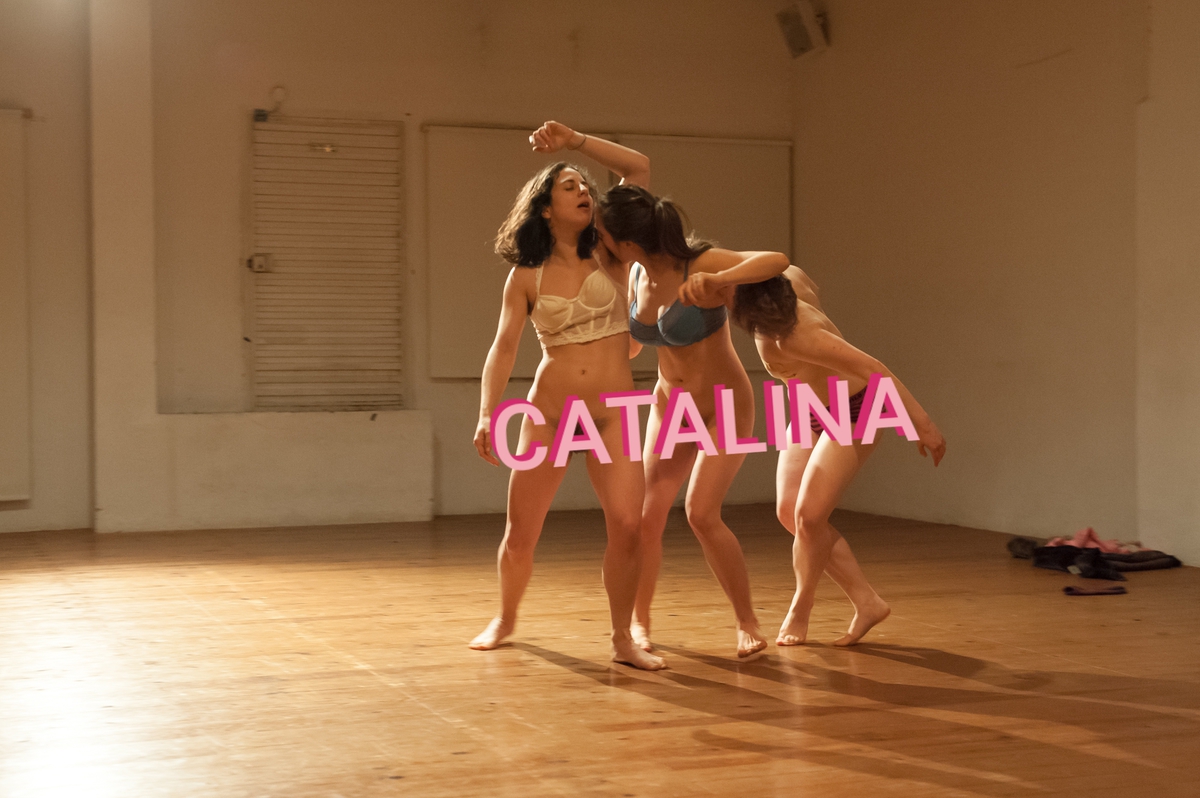 “Excuse me, where is the exit?”. To the strident tones of the song “Al fondo a la derecha” by Siniestro Total, Catalina begins, performed by the group Iniciativa Sexual Femenina formed in 2017. Its members, Elise Moreau, Cristina Morales and Elisa Keisanen run from the emergency exit door and throw themselves against the back wall of the stage in the Antic Teatre losing themselves in the chaos of the punk music. This is just the calling card. The origin of the show is bastard. “Excuse me, where is your fucking mother?”.

Sweating and semi-naked they gob on the stage. Some spit first on their own bodies and we see the saliva dripping down onto the floor. “If you want good sex you have to take the initiative” one of them shouts while running around frenetically. The machinery is degreased and ready for this initiative. But hold on, what kind of initiative are we talking about?

Stealing the title of another of Siniestro Total’s songs which is played in the show we could say that this group is proposing an asexual initiative of pre-school bestiality. Bestial and pre-school because they are established in a pleasant proposal as an emancipatory tool from the hybrid, the intense and the exploratory without prejudice. And stealing the title from Paul B. Preciado we could also say that this group is proposal a contra-sexual initiative. In the Manifiesto contra-sexual (2002), this queer philosopher offered an instructions manual to change the body into a “more intense political space to carry out operations that are counterproductive of pleasure”. Like the manifesto, Catalina also stand up as recipe book for operations that are counterproductive of pleasure. Above all, shunning the act of obtaining heterocentric, genitalocentric and monogamous pleasure, we are invited to move the erogenousness around in multiple directions and to different elements. Elise, Cristina and Elisa become excited sucking skin, licking chins and brushing elbows and knees. The three contra-sexual Bacchae decorate in garlands one of those metal bar tables – the kind where you eat olives and crisps. And then they fuck it.

During the performance you get the feeling that this female, bestial, pre-school and counter-sexual, sexual initiative, created in the Can Vies independent social centre, has been learning new ways of intense and dissident pleasure all this time – accompanied by the necessary pain – and that now there is no going back. Once you have been turned on by an elbow and the leg of a table, it is more than probable that you will carry on. “Almudena tiene una hiena que es lo único que la llena”.

Last year, the choreographer Marlene Monteiro received the Silver Lion at the 2018 Venice Biennale for her piece Les bacants – Preludi per a una purga (The Bacchae – prelude to a purge). The trophy is a representation of another beast: a sphinx.

Les bacants begins with a spectacular entrance to a reggae beat with five live trumpeters who weave in and out of eight performers. Monteiro herself moves in a frontal and squeezed space in full harmony with the painting of (the?) Greek vases, adorned with a golden bathing cap and a satin robe of oriental inspiration – in reference to the possible origins of the god of wine – on which we see her hanging a kind of horse’s tail. Her figure rapidly undergoes a metamorphosis. The performer puts on the robe and bends over and her back to the audience. Now the hair frames her arse-face to which she draws up the microphone which amplifies strange sounds as she moves restlessly and energetically around the stage. We could think that this creature embodies the monologue of Dionysius in from the Cadmus Palace at the beginning of “The Bacchae”, where he claims the hearts of the Bacchae who hold up their drums and begin those dances that that make the royal mansions teeter.

At last we can clearly hear the sound of an irregular heartbeat.

However, this piece is by no means an adaptation of the work of the last great tragedies. The choreographic reading of Euripides text pursues the generation of a repertory of hybrid and ecstatic figures, situated beyond what is rational, which will finally allow us to purge, liberate and reduce any embers of order that are within us. In one of the first figures of this Dionysic repertoire one performer brings close to another a sleeve with a funnel that connects his heart to a microphone. The first time he does it we scarcely perceive the heartbeat. The performer dances convulsively and puts the sleeve on again. Now we can hear the rhythm of the organ a bit faster, but still not enough. The performer continues to move around frantically and then replaces the apparatus. At last we can clearly hear the sound of an irregular heartbeat.

The figures that run through “The Bacchae” will be an insistent repetition of the amplified heartbeat of the Bacchae, sometimes more frenetic and others more at rest, as if the swaying of the reggae that the piece opened with was marking out its overall rhythm. The music stand behind which the musicians sit unmoving turn into the main fetish of Dionysian chaos: absurd objects, carrying no scores, deforming umbrellas of the face; phallic pistons introduced into tthe mouth or masturbated.  The musicians deform the face with their trumpets, the performers belch, stammering out their announcement that “they fuck us all in the worst possible way”, they dribble, they twerk, they play the castanets or a sinister lip sync of an undigestible “Unchained Melody”.

Blood is the storyline of Dark Field Analysis – a piece by choreographer Jefta van Dinther. The title refers to a branch of alternative medicine which uses a dark field microscope to diagnose systemic illnesses which originate in the blood. Performed by Juan Pablo Cámara and Roger Sala Reyner, this piece expands the repertoire of the corporal possibilities include in the different works of the SÂLMON Festival.

Despite the attraction of the cyberfeminist fantasies, where the union with technology would allow a multiplication of the range of identifying experiences, van Dinther is able to install us in another corporal dimension through the plasticity of the naked body, sound, space and lighting. The two performers are investigators, with half of the show in virtual darkness, giving us only a few clues as to the pre- or post-human character of their existences. At the beginning of the piece the performer who present s repertoire of more mechanical gestures demands of the other (who is apparently closer to what we understand as human) that he open his mouth. We immediately have access to a journey of artificial sounds, of ceramics, which in turn are confused with the “nature” of this individual.

In the same way as violent birth filmed by Kazuo Hara and included in The Bacchae,  we are led to research in which the rug that provided the limit for the performers will be pulled from under them and taken away; where bodies become confused and hybridised, and where the human and the artificial, the abysmal and the post-human come together in a vicious circle.

The SÂLMON Festival takes place in Barcelona until 10 February.