What has happened with the Barcelona draughtsman Sergio Mora (1975) since the Spring of 2015 seems to me an exceptional phenomenon of success and international projection. And even more so in times of crisis. The book Moraland, published by Norma Editorial, brings together a collection of his work.

The notion of “expanded drawing”, which I use to define his recent evolution, is not a conceptual whim. Throughout almost three hundred pages of this book we find, for example, photographs of his large format drawings which travel around, painted on a visible metallic background, on the side of the Fer Francés gallery owner’s truck. And there are those that accompany Gucci jackets, adorn enormous casks of wine in a castle in Bordeaux and, above all, those which appear as traditional tiles on the wall of the seafood restaurants and bars in Miami (the Bazaar Bar, in the SLS Brickell Hotel) or carnivorous suppers in New York.

Expanded drawing in clothing, in vehicles, in objects, in the architecture of bars and restaurants. If I had opted for drawing, I would have loved to have experienced what has been happening to Sergio Mora in recent years. In other words, to be able to make a few personal dreams come true, as well as other commissioned projects which have also resulted in a kind of personal trip. 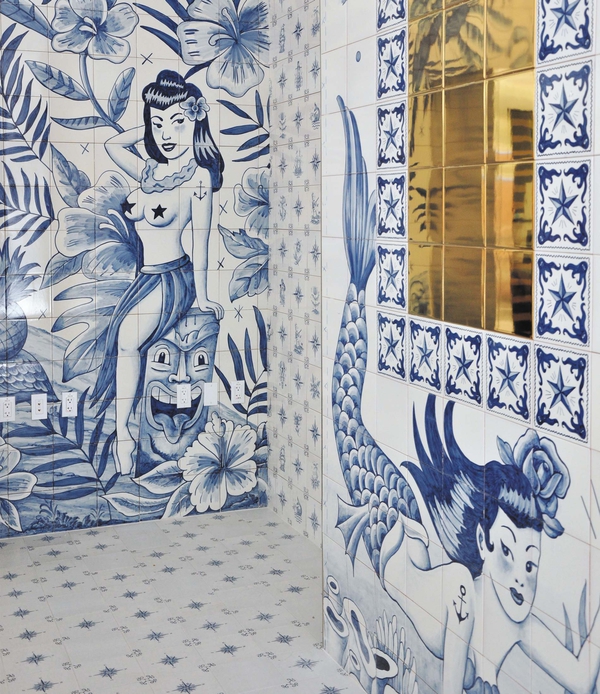 In this case I believe that there is nothing coincidental and that everything is merited. Almost from his beginnings, and possibly only by intuition rather than consciousness, the artistic project of Sergio Mora has been, paradoxically, very clear in its ability to permeate and cross borders, oscillating between painting and drawing or illustration. Some years ago, his work may have seemed too artistic to the publishers of illustrated books more concerned about run-of-the-mill niches than the evolution of the times and the complexity of things. 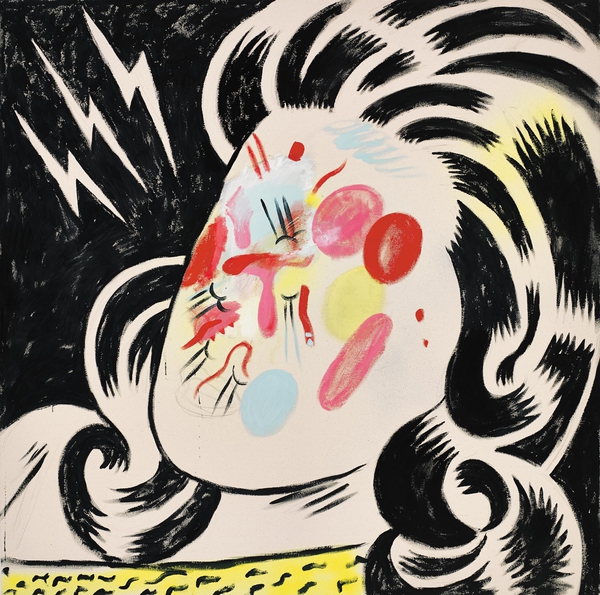 And it could also have appeared too illustrative and anecdotal to old-fashioned gallery owners and critics who were not on the ball. In fact, this was precisely the place where Sergio Mora was happiest and most creative: at the same time a unique pictorial and popular reproductive artist, at the same time surrealist and pop artist (but different from the Californian pop surrealism of Gary Baseman and Tim Askup, although clearly influenced by the former) and an international and local artist, rich in exchanges and nods to other cultures. Mora is able to express himself with as much freshness in a painting exhibition, an illustrated book either for adults or for all readers, a bizarre comic, an album cover or a subjective and non-neutral design for fashion or interiors.

his popular and surrealist or metarrealist images are also intergenerational.

Another key is his love for “Spanglish”, the association of ‘Made in USA’ clichés and ‘genuine’ Spanish elements: sirens and other tattoo themes, and monsters from popular or B movies on the one hand, and hams, rustic wine pitchers and Sevillana dances on the other. There is a danger there of falling into common places and formulas for their own sake, but for the moment this artist has been saved by the good use of colour and the capacity to make subtle changes in meaning for things which are apparently boorishly clichéd. 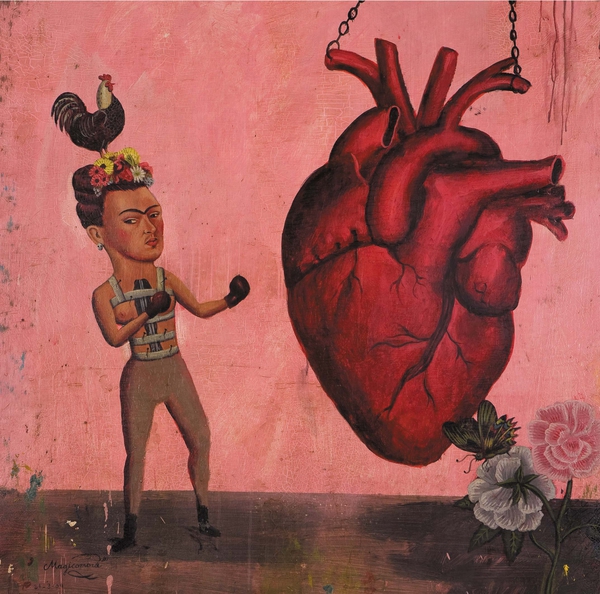 Figurative communication is easy for Mora, as he loves some of the icons of mass culture, from tattoos of beautiful sirens to the injured and quarrelsome Frida Kahlo, as well as a series of American pin-ups or film amphibians – here in the form of the monster from the lake.  His drawings and paintings can be considered as collages of images which are from the other, popular, appropriated and shareable. In Mora’s work the fictions from the other are combined in such a way that they make up a world which seems to be the artist’s own – a world which is as shareable as it is personal.  His narrative (or almost narrative) collages manage to change and extend the sense of the figures that they bring together. And his popular and surrealist or metarrealist images are also intergenerational, reaching as easily those born around the turn of the century as those of us who are as old as rock itself. 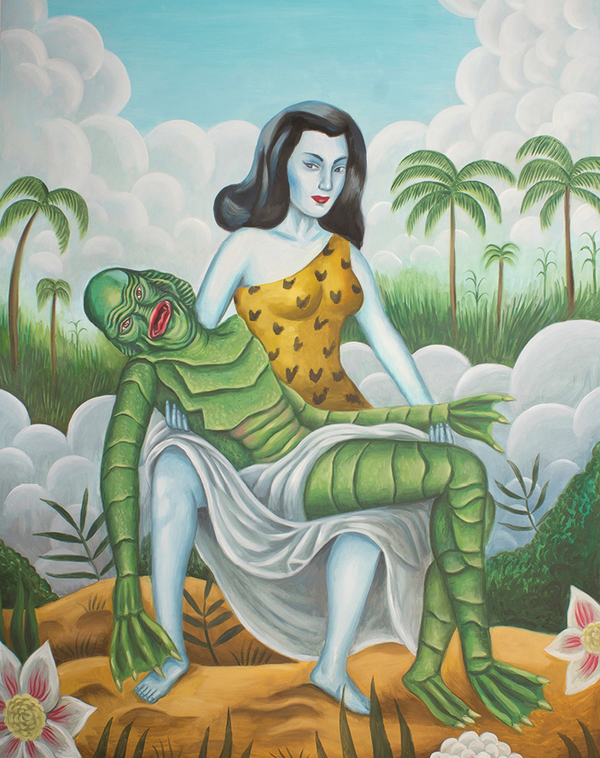 One of his best recent paintings, in fact, makes reference to the same film icon with which I departed, way back in June 1986, the first series of Arsenal – a series I invented along with Manuel Huerga and Jordi Beltran. That night, the everchanging video collage of Arsenal was an association of festival images and music, adapted for the solstice festival of Sant Joan, in which at one moment the monster of the lake appeared walking like a drunk, zigzagging, to the sound of the euphoric “Soul Finger” by the Bar-Kays. In the image of Sergio Mora in Moraland, reminiscent of the marble-like Pietà by Miguel Ángel, it is the strong and beautiful girl who takes care of the monster, who we don’t know whether has been overcome by the pain of love or the hangover. 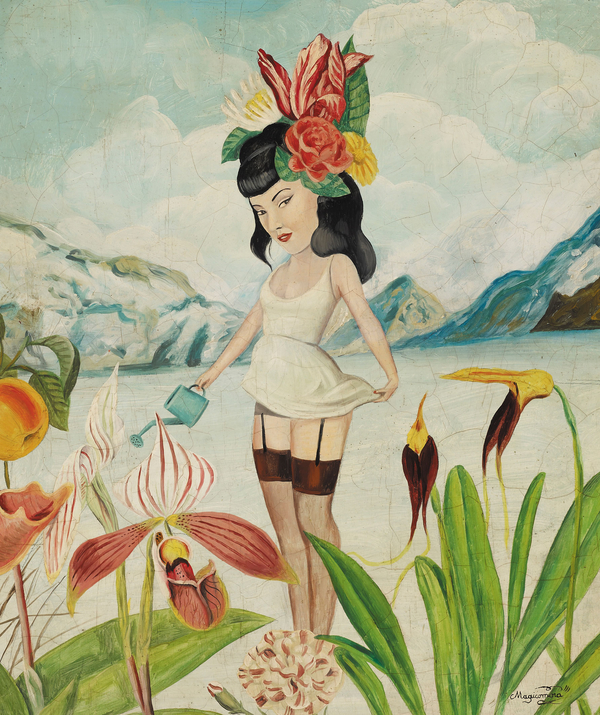 In the Catalan and Spanish context, I think the recent and growing success of Sergio Mora is comparable with the, now distant, success that Valencian draughtsman and designer Mariscal enjoyed in the 1980s. Or even the “Rosalía phenomenon” as it is known, although the fame of this marvellous singer is increasingly similar to the global celebrity of Pedro Almodóvar. Or Pedrito, as we called him before he was famous, in the circles of experimental cinema and eighties nights in El Sol in Madrid. For that reason, it would not surprise me if Mora might very soon design an album cover for Rosalía or a film poster for Almodóvar. A commission from David Bowie is no longer possible, but Iggy Pop and Nick Cave are still around and still making great records. 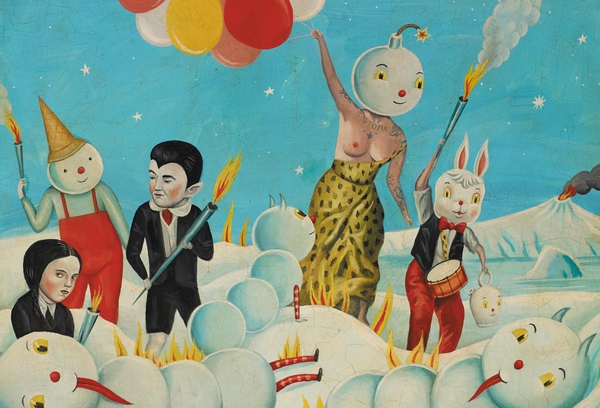 Sergio Mora, Children of the revolution, 2013.

In any case, it seems that the achievements of ‘Magicomora’ are exceptional for a draughtsman, illustrator or painter; in other words, for an individual not bound by genre film or pop music productions. By the way, in the three cases mentioned earlier (Mariscal, Mora y Rosalía) success – like the work carried out previous to it – came first in Barcelona before it became international. Maybe the cultural policies and general politics did not work out so well in Catalonia, but I think it is demonstrable that creativity in Barcelona is outstanding in all artistic and literary disciplines and has been for many years. The problem is that most cultural managers were terrible explorers during those years, who were unable to discover anything of any importance since Tàpies. I feel sorry for them, but more so for the others.

Finally, I would like to remind you that before being recommended in 2015 by Juli Capella and embarking on design commission for brands like Philippe Stark and Bruno Borrione, kitchen brands such as José Andrés, or the Gucci fashion label, and before winning the Latino Grammy 2016 for his drawings on the cover of the Love of Lesbian album El Poeta Halley, Mora had been for many years with his nose to the grindstone in Barcelona without any real recognition. It almost seems strange now much for many years the only people who defended Sergio Mora were the people from the Iguapop Gallery in Barcelona and very few others. When I discovered him in 2002 he was an unknown. I remember that it was in the garden of the Orlandai school in Barcelona. I was taken by his cover for a children’s book: La casa de la Mosca Fosca. Soon afterwards I came across him again in the Iguapop Gallery in a more adult phase in a group show. My praise must appear as the first or second published recognition of his work. All of that period – perhaps because it is too distant and “dullworking” – is what does not appear in Moraland, which focusses on the highly successful production of his most recent years.