Surrealism and Objects: an obscure relation of desire

One of the pillars from which interwar Parisian surrealism was build was a sentence from the Count of Lautréamont: “As beautiful as the chance juxtaposition of a sewing machine and an umbrella on a dissecting table!”

This is a good example of the importance of objects within the movement. often pre-existing objects were used to create works. For the surrealists it was interesting to turn the narrative of the object on its head before turning it into a piece. In doing so the signifiers and the signified were disturbed, from Dalí’s lobster telephone to Meret Oppenheim’s fur-covered teacup, and Duchamp’s ready-mades. 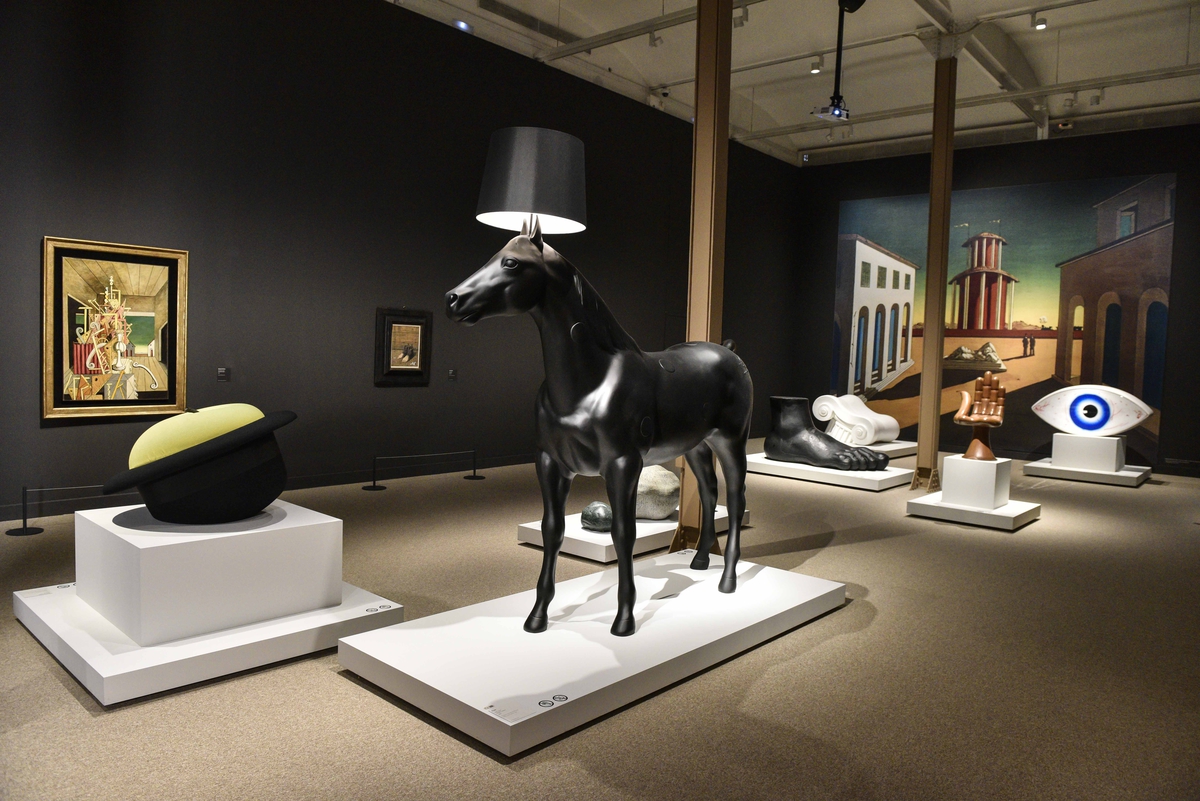 View of the exhibition Objects of Desire. Surrealism and Design, 1924-2020.

So, it is no surprise that the design of objects became incorporated in the influences, ideas and obsession of surrealism. This is the starting point for the exhibition Objects of Desire. Surrealism and Design, 1924-2020,  a collaboration between Caixa Forum and the Vitra Design Museum and curated by Mateo Kries, who is the director of the German museum. This is a 100-year journey through 285 different works.

There was probably nobody who opened up the paths to interpreting the surrealist object more than Juan-Eduardo Cirlot. In his seminal work El mundo del objeto a la luz del surrealismo (The world of the object in the light of surrealism), written in 1953 but not published until 1986, he said: “Almost all objects in surrealist practice have in common their practical uselessness, their strange and disturbing aspect, arbitrariness, contradiction and heterogeneity of the elements that constitute them. The merit of surrealism has been to highlight the existence of the object. Surrealist research, in trying to revolutionise the sense of the object, procure displacement before anything else; tear the thing away from its rational direction (symbolist or utilitarian) to determine the emergence of the pure irrationality of the object. What is terrifying about the revolt of the object is rooted in its silence and in its immobility”. I would say that it is impossible, at least for this writer, to read an exhibition like without being constantly aware of Cirlot. 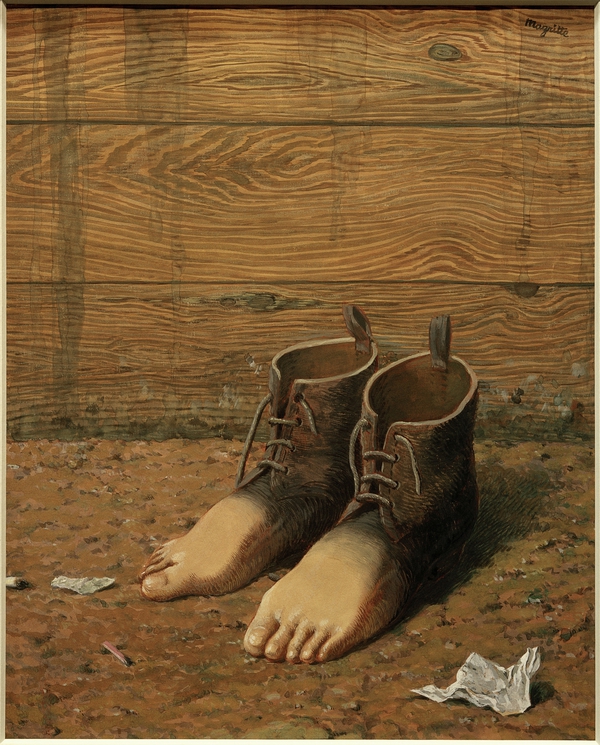 From the outset it could seem that design is precisely the opposite of surrealism. As a discipline, design tries to resolve as best it can the problems of our relationship with objects. If we were to talk of rationalist, utilitarian or functionalist design surrealism would have no place. But humans are not so simple. Donald Norman, professor of Computer Science and Psychology at Northwestern University, analysed this kind of complexity in his book Emotional Design: Why We Love (or Hate) Everyday Things where he explained that we often love or hate the domestic objects around us for reasons which are not very rational. One of the funniest passages is where he explains that once when he was on a radio programme arguing against postmodernity a listener phoned in to tell him that they had the kettle that Michael Graves made for Alessi.  It is a kettle with a small bird on the spout which whistles when the water boils. They went on to say that they were always cranky when they woke up in the morning and that that kettle brought a smile to their face that they would not change for anything. Norman was wrongfooted: it was not the best kettle, nor the one that you could pick up most easily, and it did not pour the best, but this person was happier having it close to them. 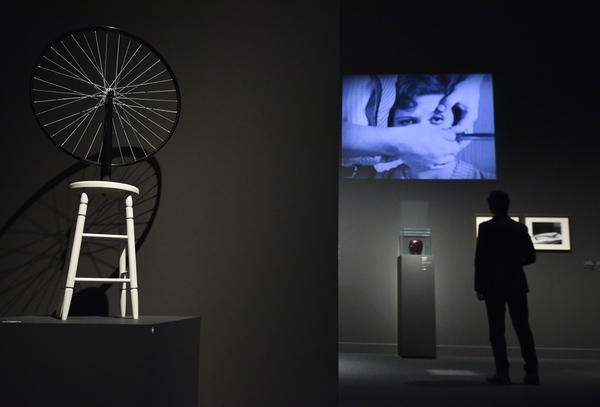 View of the exhibition Objects of Desire. Surrealism and Design, 1924-2020.

So perhaps we should forget the strictly functionalist theories when we visit the exhibition. It is in the light of Cirlot that we see how objects can move us. As he says, “it is much more exciting to see a door close than to see somebody closing a door”. The core of the exhibition is the narrative, emotional and even theatrical capacity of the object; it is the place where surrealism moves forwards in leaps and bounds into postmodernity. And maybe this is one of the basic differences between the early surrealist pieces, presented in the exhibition as objects, photographs and paintings, and the pieces that we could call postmodern, represented above all by products. 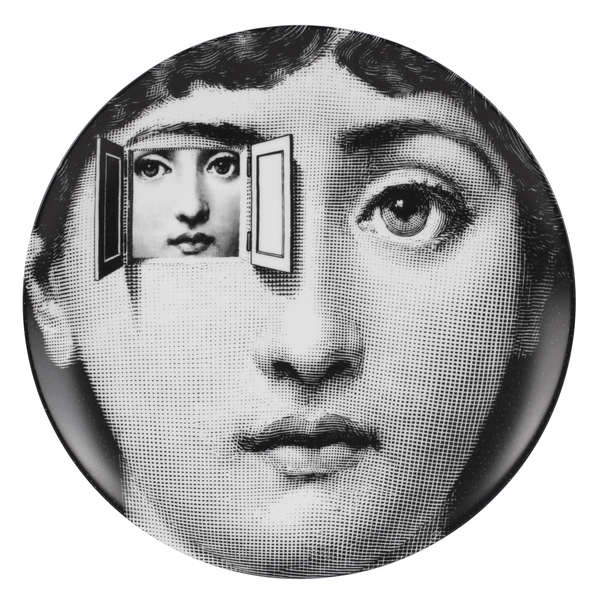 Despite that, pieces like the printed plates by Piero Fornasetti, which drink from the sources of surrealism and collage, do not show the same anxiety, mystery or transcendence as the paintings by Giorgio de Chirico. In other words, the Mae West lips that Dalí created for Edward James in the thirties are not the same as the Canapé Boca by the Italian Studio 65, at the end of the sixties, nor the same as those of Dalí and Tusquets, made in 1972. And they are not the same because the reason for their creation was not the same. The seed from which each version grows is different in both complexity and purpose. There is a certain dysfunction to hanging the Stella stool (1957) by Achille and Pier Giacomo Castiglioni for Zanotta, as if it were a work of art. It is true, the collage of objects that the designers used for this and other pieces could bring to mind the chance juxtaposition of a sewing machine and an umbrella on a dissecting table, but the purpose is a different one. 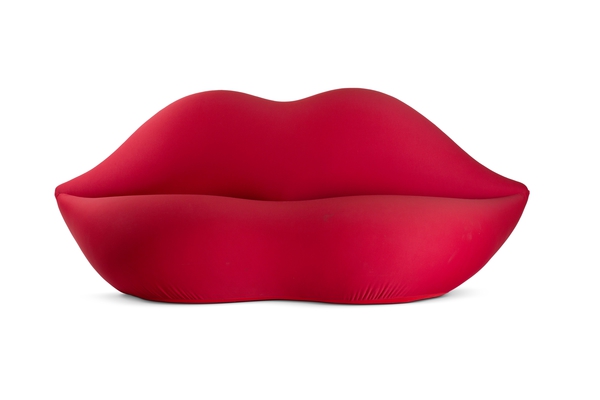 So, is the idea of the exhibition mistaken? As I said at the beginning, you have to look at the show through the eyes of Cirlot, because it is in the way the user sees them that the objects end up becoming constructed.  And behind that view, it is indeed quite intriguing to see the parallelisms, meeting points and vanishing points between the art of the interwar period and postmodern design. The narrative capacity of the pieces, beyond their function, can indeed bring together design and art. It is from here that the four areas of the exhibition bring a discourse which, while not new, is all the same very refreshing. In fact, it is the exchanges of views between the different areas that makes it more exciting. 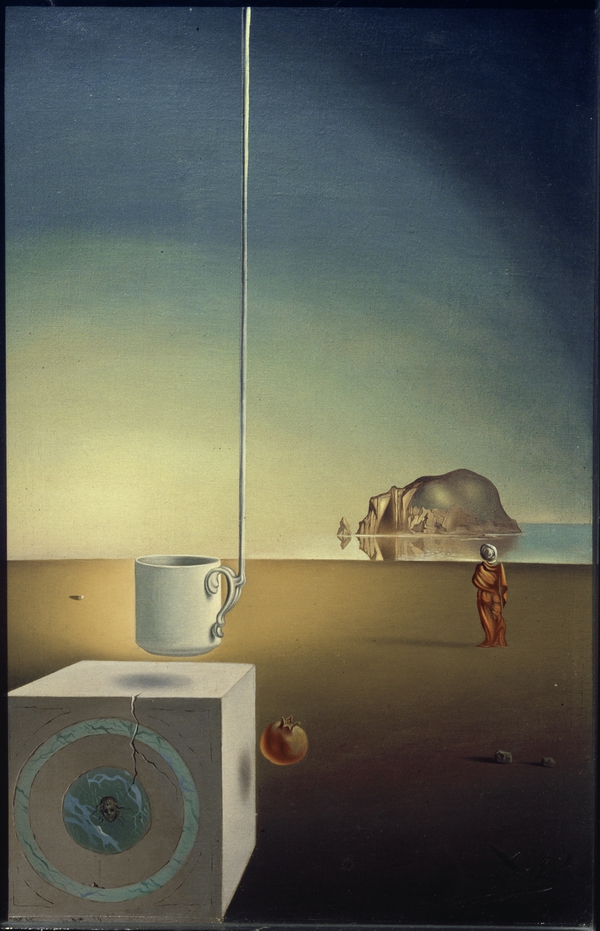 The first section, “Dreams of modernity”, centres on an exploration of surrealism from the 1920s to the 1950s. The photographic documentation of surrealist works and events is especially interesting, with veritable cabinets of curiosities, very different from the “white boxes” of the museums. it is in the images that you discover objects that could have unsuspected uses, hidden readings, secret codes, playful surprises and which bear a resemblance to the Italian design of the 1970s for example. What remains clear is that surrealism is a “brand” that sells. Its ability to reach out to the public at large is what made it so popular, even if it wasn’t understood in all its dimensions.

It is the way we look at this piece that makes it surreal.

The magnificent experimental film Les Mystères du Château du Dé (The Mysteries of the Château of Dice) (1929), by Man Ray, is a clear example of what I am saying. This short has it all: symbolism passed through the filter of Dadaism in the subtitle and famous sentence of Mallarmé “Un coup de dés jamais n’abolira le hasard” (A throw of the dice will never abolish chance); Art Déco in the decoration and the poster behind the dice players at the beginning (it is an advert for the drink Pivolo by Cassandre, who is curiously absent in the show since he made some marvellous surrealist covers for Harper’s Bazaar); futurism in the attempt to show speed in the scenes of the car journey; cubism in the sculpture in the garden of the house; the car in which they are travelling I would say is an Adler Standard, designed by Walter Gropius. And the house where a large part of the action takes place was designed by the architect Robert Mallet-Stevens – property of Viscount Charles de Noailles, a friend of Man Ray’s – is clearly in the modern style since it displays many of the architectural quirks of the movement. So, in a single piece there is a whole pile of references to the avant-garde movements and it seems that it is surrealism, obviously present in the plot and the drama, which finally defines the film. It is a bit the same in the exhibition whose infinite links to different movements, trends and artistic tendencies end up coming together around the surrealism “brand”. 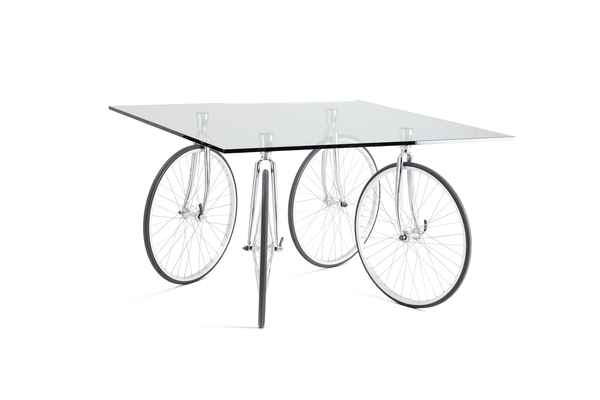 A second section under the name “Image and archetype” opens with the Roue de bicyclette (Bicycle wheel), emblem of the objet trouvé of 1913, when surrealism did not yet exist. It is the way we look at this piece that makes it surreal, and which makes us relate into the Tour table of 1993, by Gae Aulenti. There is a Castiglioni corner which is delightful despite the hanging stool, and postmodern and contemporary pieces. What they have in common is their subversion of the archetype of the domestic object and there is another myriad of projects by contemporary designers that would also have fitted in, from Josep van Lieshout at Emiliana Design, or even Oscar Tusquets – who is actually present in a photograph with Dalí and the Mae West lips, but not with his own Ali-Baba sofa. Perhaps further collaboration with the Design Museum of Barcelona would have enriched the exhibition as a whole. 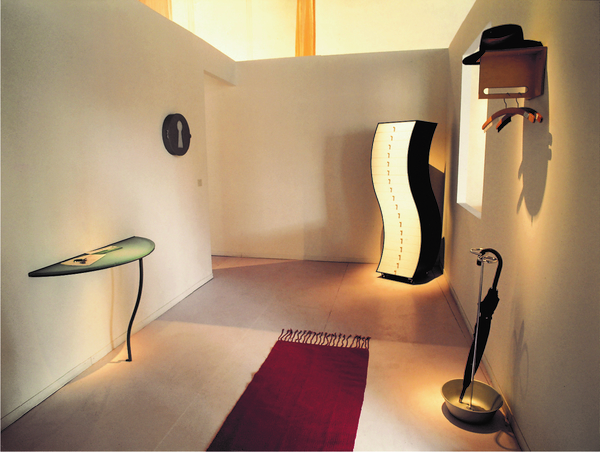 Eroticism form the centre of the third section. For example, there is the novel by André Bretón, Nadja, which I would have accompanied with Nebiros by Juan-Eduardo Cirlot. Once again, Cirlot.

However, this is an exhibition thought up for all kinds of public and that could explain why there is a large number of images of interiors by the unclassifiable Italian designer Carlo Mollino, but none of his famous pornographic Polaroids. And that story definitely deserves a space in the show. Around 1960 Mollino started to look for women – mainly dancers – in Turin, where he lived, and he would invite them to his villa for modelling sessions. Mollino’s backdrops were disturbing and fascinating at the same time. Finally, once the Polaroids were printed, Mollino painstakingly modified them using a paintbrush. There were more than 1,000 photographs which remained secret until his death in 1973. All the same, the pieces by Gaetano Pesce and the omnipresent Dalí are worth a visit. What is inexcusable though is the absence of Joe Colombo and his eroticising interiors, because Pop was also sometimes surrealist. 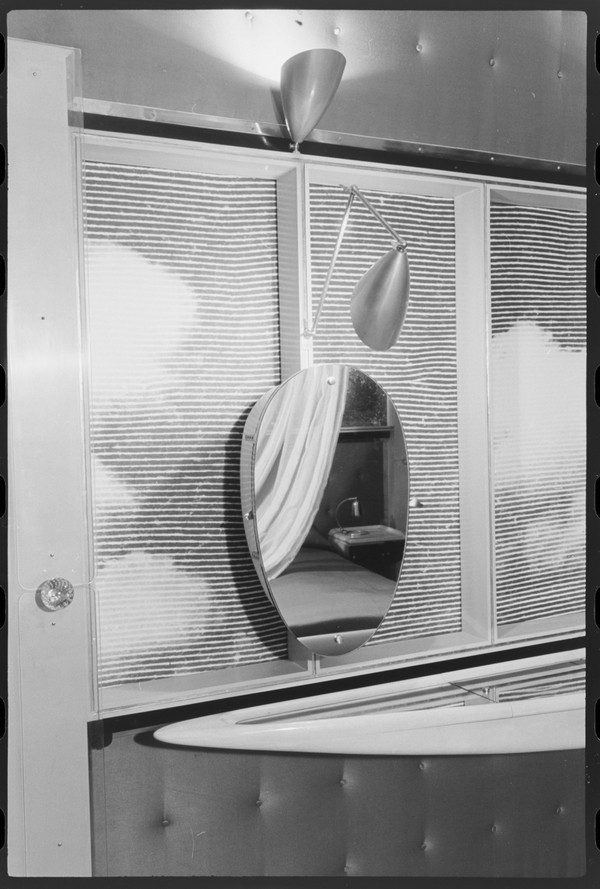 Finally, the last part of the exhibition is dedicated to what the ethologist Claude Lévi-Strauss called “the savage mind”; in other words, an interest in the archaic, chance and the irrational. here, there are pieces of contemporary design, including works by the Campana brothers and the Bouroullec brothers, and in particular a fabulous installation named Designs for an Overpopulated Planet: Foragers (2009), from the Dunne & Raby studio. Continuing with exchanged glances, you have to make an effort to imagine the tears in the man Ray photograph crossed with the digital videoclip by Björk. The search for the primitivism of the unconscious concludes the exhibition with Miró, which is always a good way of ending.

To finish I would like to return to Juan-Eduardo Cirlot when he says: “Art, like man, is found between two opposing forces that demand it: one is the beauty of absolute serenity, and the other the fascination with the abyss”.

The exhibition Objects of Desire. Surrealism and Design, 1924-2020 can be visited at CaixaForum Barcelona until 27 September.