The 1976 Venice Biennale as a Symptom

Once, sometime in the 1970s, Cesáreo Rodríguez Aguilera told me, paradoxically, that what had done most for the spread of avant-garde art had been Francoism.

He said that he himself, along with Zabaleta, had attended a talk at the Círculo de Bellas Artes in Madrid, at the height of the Republic, and that his friend had shouted out “Viva Picasso!” The public had reacted by called them “backward” in return. According to Cesáreo, the republican left was more conservative in matters of art and if they named Picasso director of El Prado it was because of his international prestige at the time of the Civil War. 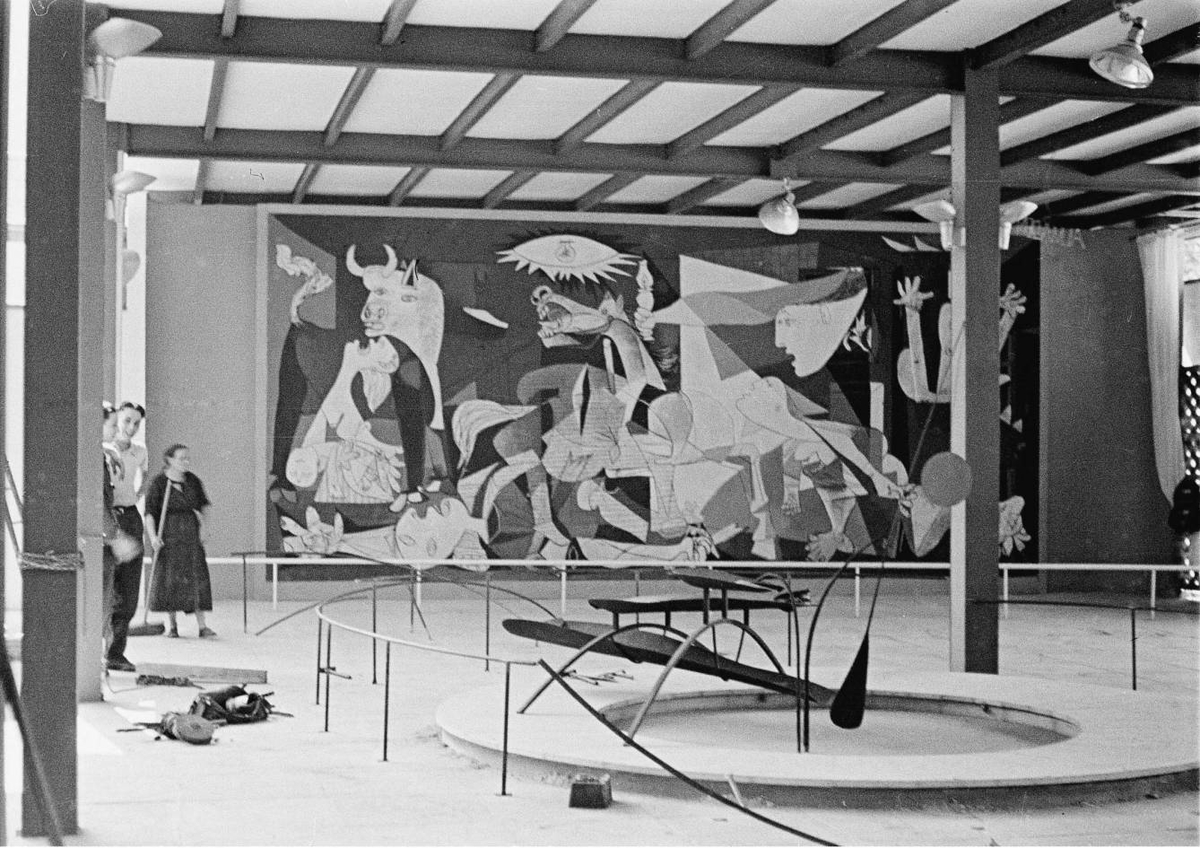 Interior of the Pavilion of the Republic, 1937.

At the beginning of the post-war period, fascist Spain was not accepted in any of the biennials or international art fairs – until the appearance of an illustrious member of the Phalange named Don Luis González Robles that is, and it is he who I will discuss here.

This educated and very amiable character was the person appointed by Franco’s government to try to give some prestige to the damaged image of cultural promoter. He presented international avant-garde artists such as Millares, Saura and Tàpies at the biennials and the international museums…many of whom has close connections with the Communist party, either in Spain or Catalonia. González Robles had persuaded the Franco government that art had very little political repercussion in terms of propaganda and yet the artists that he was promoting offered an aura of prestige.

That situation would change radically at the end of the 1960s when at an exhibition at the Tate Gallery in London on Spanish Avant-garde art, the participants made them take the works down, stating that they should not have to contribute to dignifying the dictatorship. Perceptions of the end of the regime were starting to emerge and the Communist parties decided that it was time to make a stand.

Following this rupture, González Robles made a new selection, including Cuixart, who had won the Gran Prix of the Sao Paulo Biennial, Joan Ponç, who had won the painting prize, and Canogar, among others.

Meanwhile the Communist parties of Spain and Catalonia were preparing their position for the moment when the regime finally fell. With the dictator now dead, some of the leaders of the Catalan Comunist party came to see me at the Galeria Adrià, which I was director of at the time, to propose that the gallery should host an art exhibition which was aimed at raising party funds. They approached the gallery owner, Miquel Adrià, and he accepted. They designated as the exhibition coordinator a former member of the Phalange, José M. Kaydeda, who Hernández Pijuan told me had astounded him at the university and who had been a painter and later on a para-psychologist and esotericist.

In that exhibition several artists from the Galeria Adrià and others took part, but I cannot remember the details of the exhibition, probably because by then I had already moved on the Galeria René Metras. The next activity I heard about which related art to the Communist parties was the 1976 Venice Biennale.

It all started because since Spain was still a dictatorship (the head of the government was Arias Navarro and the Head of State  was the current emeritus king) Official Spain was refused admittance and after a bit of “give and take” there it was agreed that the Central Pavilion of the Giardini di Venezia would be dedicated to an exhibition entitled Spain: artistic vanguard and social reality (1936-1976).

After Venice, this exhibition could be visited at the Miró Foundation in Barcelona, in December 1976. And recently, in September 2018, it was rebuilt at the IVAM in Valencia.

It should be pointed out that several of the aspects in producing this show were very important for the time at which it happened:

The exhibition had three main sections:

1) Reconstruction of the Pavilion of the Republic, with works by Picasso, Miró, Calder, among others, and a show of poster and graphic work, especially Renau, but also Fontserè, Ballester, Bardasano, among others. Other artists such as Castelao and García Maroto were also included in this section.

2) A special section dedicated to the artists who were considered to be the most outstanding at that time: Picasso, Miró, Alberto Sánchez, Juli González and Josep Renau, with a special focus on the first two and the last.

3) Critical development of the most outstanding trends from 1936 to 1976. This is where, under the curatorship of Imma Julián, who followed the instructions of Tàpies, Saura and the Equipo Crónica (that is, those of the Communist parties) to the letter, there was a selection of artists who had the approval of the triumvirate and those who were not to their taste were rejected, such as Guinovart, Todó, Artigau, Garcia Vilella, Tharrats, Vilacasas, and others. From Valencia Boix, Heras, Armengol and Equip Realitat, among others were considered dispensable, and in Madrid the axe fell on Canogar, José Guerrero and others.

When they found out he was homosexual they excluded him.

It is surprising that artists who were so clearly aligned with the Communists were rejected, such as Guinovart and Artigau. But the most curious case is that of García Vilella, who was a member of the Central Committee and therefore it had been decided to promote him internationally alongside Tàpies… but when they found out he was homosexual he was excluded. Another of the highlights for their complete absence in any of the sections are the women artists, with the exception of the obedient curator.

Ever since then, Tàpies has been the official artist of Catalonia, and his work presides in the Council Chamber of the Government of Catalonia and the entrance to the MACBA; he has his own foundation and he took offence when his “Sock” was not allowed to occupy the Oval Room of the MNAC. He was made the Marquis of Tàpies.