Many different personalities coexisted in John Huston (1906-1987): the self-demanding and rigorous film director, the admirer of Joyce and Rothko, the loving and demanding father … but also the actor with the appearance of a rascal or adventurer, the reveler, the divorced, the boxer…

In fact, Huston decided to be a film director because it allowed him to express and represent all the characters that he wanted, even more than being an actor and a “freeloader” in the best sense of the word. 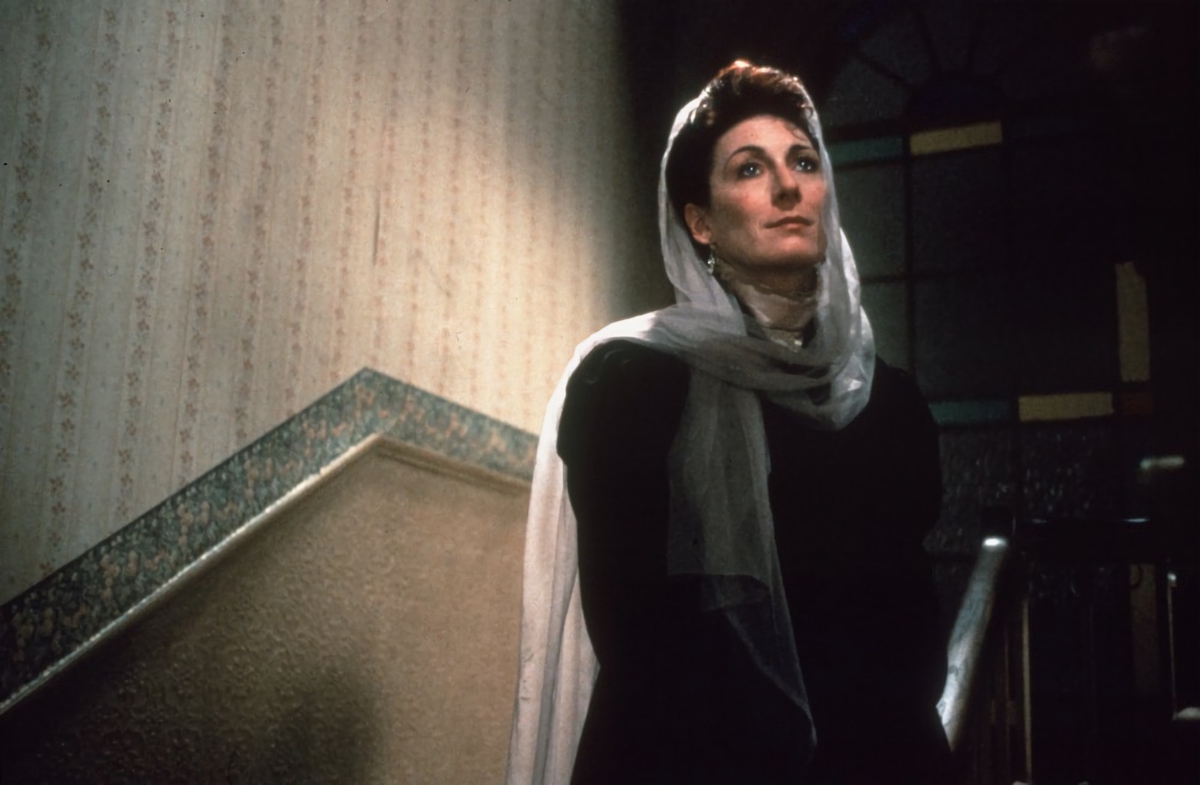 Anjelica Huston in The Dead.

Had he not made The Dead, his cinematic farewell would have exhibited a very different tone: that of the black comedy with mobsters Prizzi’s Honor (1985). And perhaps, we would now say that his best film was The Misfits (1961), an extraordinary twilight, torn and vitalist, as well as existentialist post-western, which had a magnificent script by Arthur Miller conceived for a splendid Marilyn Monroe. In that film they drank a lot of whiskey, as in the funny adventure The African Queen (1952), where Huston incorporated the humorous tone of some dialogue he had had with Humphrey Bogart during the filming in the jungle, both quite full of Jack Daniel’s, on pesky mosquitoes: “Nothing bites me. A solid wall of whiskey keeps insects at bay … Anything that bites me soon drops dead so I am safe.”

Huston understood life as an adventure and knew how to film some memorable adventures, such as The Treasure of the Sierra Madre (1948, starring his father) and The Man Who Would Be King (1975). But the tone of his last work was radically different. 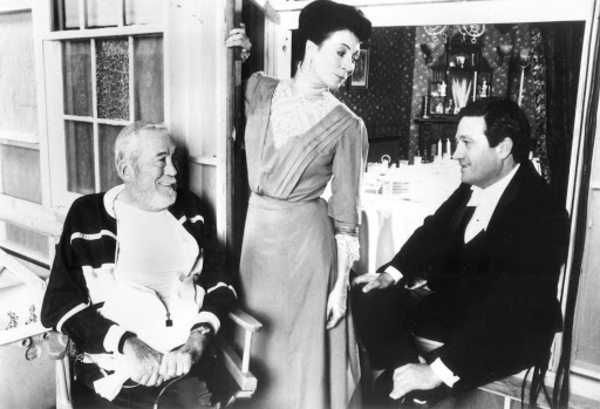 John Huston, Anjelica Huston and Donal McCann, in the set of The Dead.

The first time I saw The Dead, I experienced a strange sensation for most of the film. The story took place in Dublin, during a dinner with friends and family, on the festivity of the Epiphany, on January 6, 1904. The narrative was limited to a succession of conversations and daily acts, apparently trivial, and yet there was -in the way of contemplating all that- a rare fluidity, an extraordinary cinematographic and vital wisdom, a visible love of cinema, life and diverse people, happily real, with their excesses and defects, not adorned or too judged. All of this suggested a possibility for something different and better. And that possibility was fulfilled in a prodigious way in the last acts of the story. 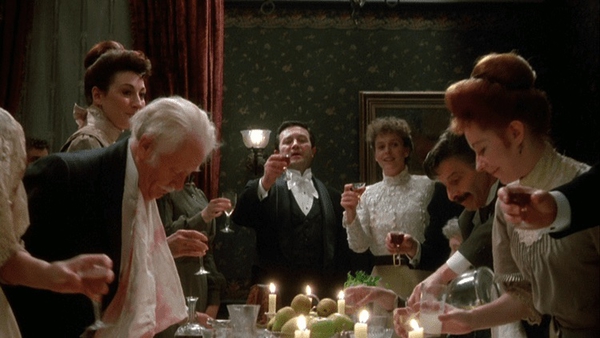 First, in the scene in which the song that is the key to everything appears and acts as a revealing light, a memory and a connecting thread with an episode from the main character’s past. It is at the moment of goodbye going down the stairs, when Gretta (Anjelica Huston) stops as she listens to The Lass of Aughrim, an old Irish song that sounds from the living room and moves her. We will soon discover, at the same time as her husband Gabriel (Donal McCann), that young Michael Furey, Gretta’s first love, used to sing this ballad. And then, the denouement comes, which actually is also the true core of the story. The two monologues – hers spoken, his thought – summarize in a few minutes, with intensity, precision and depth, what the author of the literary story -James Joyce- and the authors of its cinematic version -John Huston and screenwriter Tony Huston, son of the director- wanted to articulate on some essential issues in human existence: love and death -and dying love-, passion and its obstacles, marriage, the contrast between desire and reality, the precariousness and the transience of everything.

The Dead reminds us the difference between what we think we are to others and what we really mean to them.

Suddenly, starting from some music and its verses, there was an unforeseen connection with an intense past, with a teenage love that at the time meant, for her and for the absent Michael Furey, true life, even if fragile and transient. And that single memory, unknown to her husband after many years of life as a couple, meant a revelation capable of transforming the perception that until then, Gabriel had of his own existence. Thus, The Dead reminds us of the possibility of experiencing strange rediscoveries, and also of the difference there can be between what we think we are or represent to others and what we really mean to them. To the couple, in this case. And those kinds of discoveries can be disappointing. But in the final part of The Dead there is much more than that.

I do not want to be exhaustive in the description and analysis in case any reader has not yet seen the film or read the book. I just wish to point out that Gabriel, after listening to Gretta’s story and while watching the snow fall from a window, realizes and tells himself that he has never loved that way. And we understand that he has not been loved that way either.

The most surprising thing about the film is that this revelation and final elevation that gives meaning to all of the above, happens in a way that does not seem like John Huston’s. That denouement that the viewer can experience as sublime, in a tone typical of the best possible romanticism –content, modulated and therefore more intense- and which arises from most day-to-day, reminds me of the best films by Yasujiro Ozu, that they have that same unusual structure. To those fluid stories that ultimately lead to a kind of fullness of meaning and intimate enlightenment, unsuspected, after so many common or even anodyne actions. 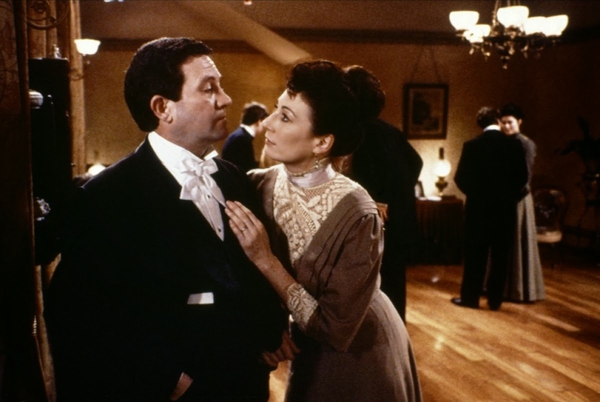 For many years, people aware of the splendid expressive and narrative possibilities of cinema have perceived the disdain of a large number of writers and critics convinced that cinema is a medium incapable of expressing with depth, subtlety and fullness what the best literature has effectively managed to express. Faced with any adaptation of an important literary work, the favorite and routine phrase of such observers has been: “the film is not up to the novel.” And the truth is that they were often right. Sometimes the problem was fundamentally a question of footage: it makes no sense to try to summarize in one hundred minutes, or two hundred, novels like War and Peace or In Search of Lost Time. And, already in the 21st century, when television series deal with long stories, it turns out that they tend to squeeze or lengthen them too much, just for commercial interest.

But what is relevant is that after The Dead no one has been able to affirm, without running the risk of appearing ignorant, that cinema is incapable of achieving what literature can achieve. And, fortunately, since then, other authors have made films that live up to the celebrated literary stories that inspired them. For example, Martin Scorsese in The Age of Innocence (1993) and Anthony Minghella in The English Patient (1996) -from the novels of Edith Wharton and Michael Ondaatje, respectively- as well as David Fincher in The Curious Case of Benjamin Button (2008), based on a story by Scott Fitzgerald. 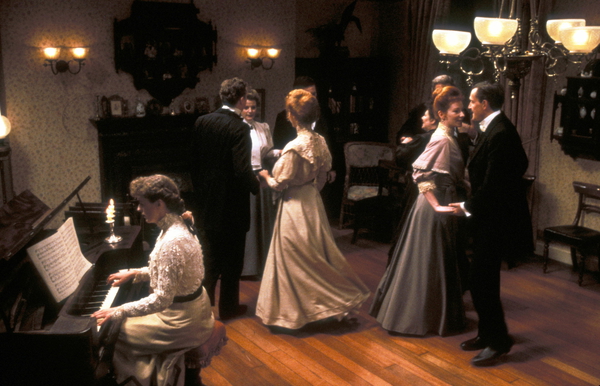 The Dead is a film that enhances Joyce’s original literary tale. And it was not easy to achieve, because it was sustained maintaining a very fine subtle tone, which at the slightest carelessness could have been destroyed. However, the Huston team and their collaborators showed that this was feasible. It is true that, as The Dead was a short story, the film version did not have to suffer impoverishing cuts. In this case the duration was not a disadvantage. And another decisive advantage of the film with respect to Joyce’s text is that the audiovisual medium allows viewers to hear and be moved by the song The Lass of Aughrim, which in the book is only alluded to with three verses.

Also, in a general way, in the cinematographic narrative, a subtle gesture or a nuance of the voice says and suggests more than a long dialogue or the psychological explanations that abound in so many novels. And a well-filmed cinematographic appearance or presence can advantageously replace those long, heavy descriptions that were written before cinema existed. In The Dead John Huston wisely uses and doses all the expressive elements and resources of cinema, from the casting to the music (by Alex North), passing through the distance and the continuity of the shots. And as in his other films, he gets the best out of every actor and every actress, especially his daughter Anjelica, who embodies, more than she plays, the character of Gretta. 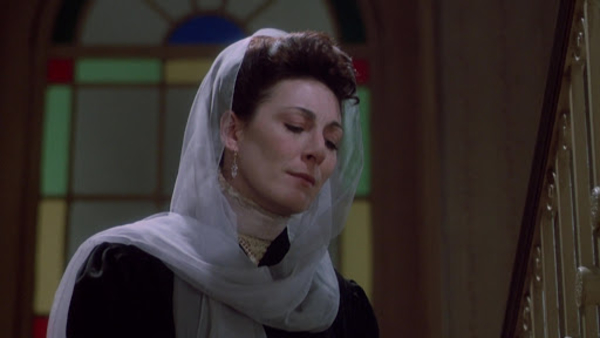 But there is another less obvious and rarely mentioned key factor, which is found in the script signed by Tony Huston. Is it possible to improve Joyce’s text and, furthermore, by means of a monologue? … Well yes: that happens in the final part of The Dead, which rewrites and distills the original text, turning the book’s third-person narration into a single meditative voice, associated with some nocturnal images, outdoors. That verbal distillation and that relationship of words with dark and snowy landscapes, manages to add to the clarity and subtlety of Joyce’s story a poetic flight at the height of the best passages in Finnegans Wake. Good prose, without ceasing to be so, suddenly becomes poetry.

The Dead meant an act of love in many ways. In the first place, from John Huston to his children Anjelica and Tony, with whom he wanted to share the creation of his last film, also as an affirmation of generational change and vital and creative continuity. Love, too, of them to their father, who filmed it very ill, shortly before he died. And finally, John Huston’s declaration of love for the life he was about to abandon, for his favorite writer – James Joyce – and for the music, people and landscapes of Ireland, the land of his ancestors.