The Magic Tricks of Bill Viola

The art of Bill Viola (Nova York, 1951) has got a hypnotic quality so intense that it fascinates and annoys in equal measure: the same is true for the mystical and spiritual (but not religious) substrata of his work.

It either fills you with enthusiasm, or it wring-foots you or it simply provokes rejection as the result of a lack of place to run to. The dead come back or are resuscitated in Viola’s videos. The  daily life of a modern young woman is shown as that of a saint in a medieval predella. Viewers are called upon to seek the soul. It does not lack beauty. It goes against the tide. That is Viola’s virtue: doing whatever the hell he wants and talking about the human condition through image and sound. 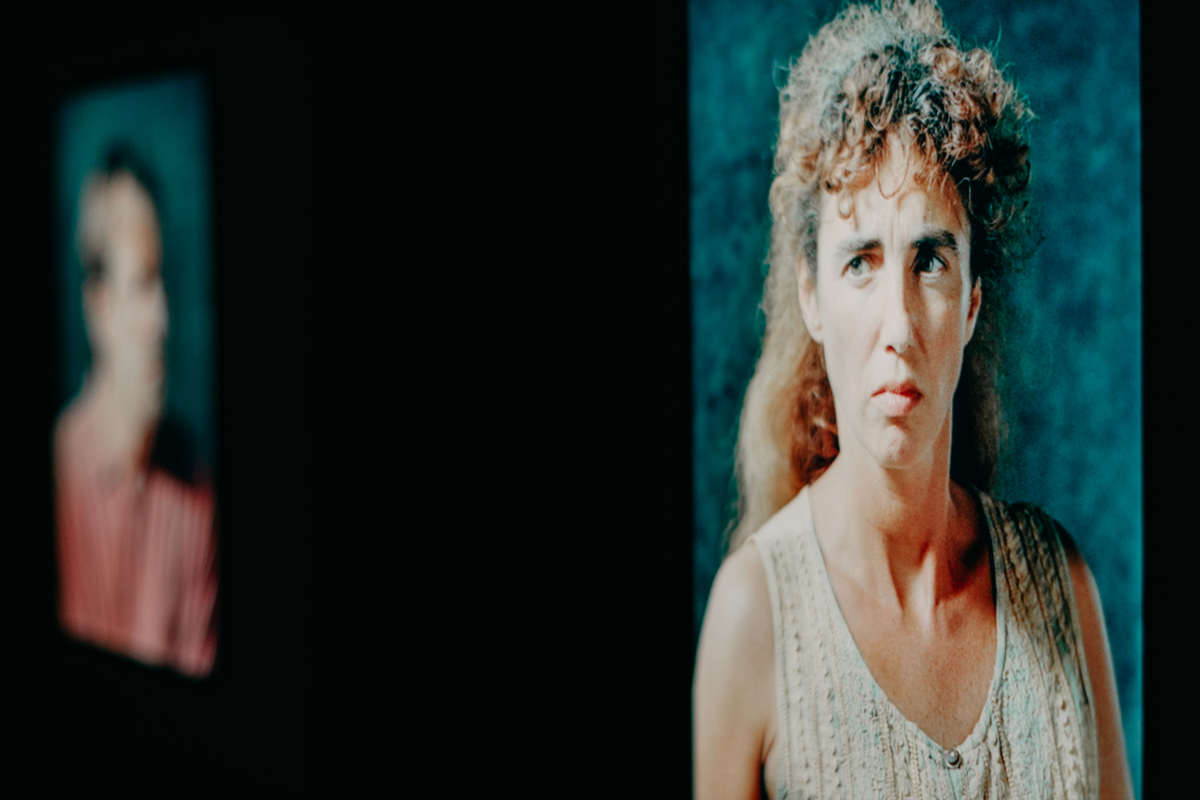 View of the exhibition Bill Viola. Mirrors of the Unseen, in La Pedrera.

In a world full of noise where looking within makes you panic, Viola appeals to silence and introspection, whether it be religious, spiritual, atheist, a belief in the otherworld or whether or not you have read John of the Cross or Rumi, two of the mystical poets which have most marked the artist. Viola simply makes art about transcendence, with an eye to the past but always using the latest technology.

Bill Viola’s first solo exhibition in Barcelona, at La Pedrera, has been a long time coming, given that we are talking about a pioneering artists in video art and the use of audiovisual technology. He has been in the front line for all the different changes in the medium and has used it for the purpose of his own message. When HD was still a pipe dream, Viola was already making videos in the form of paintings, playing with the confusion between the moving image and the photograph. So yes, the exhibition has arrived late, but it has arrived precisely when most of our lives take place through the screen and when, unfortunately, the circle of his work has been closed by a cruel ailment of the memory. 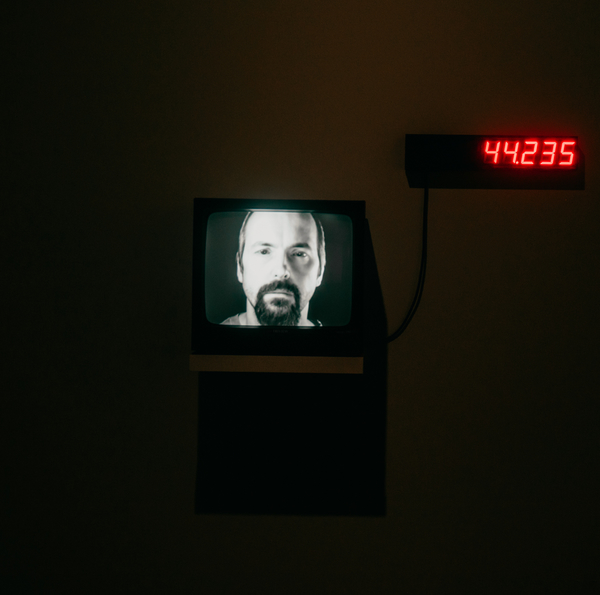 Curated by his lifelong collaborator and his wife Kira Perov, along with Llucià Homs, the exhibition begins with Increment (1996), which is a full declaration of his principles. In a small television monitor, Viola looks at the camera with a neutral expression on his face. He is simply breathing. Connected to the monitor is a screen which counts the number of breaths. That is life. The higher the number, the closer to death. Viola’s fetish poet, the Sufi mystic  Rumi says. “As we breathe, our souls slip gradually out of the prison of this world”.

Viola’s art often alludes to those moments in life when we are experiencing or suffering a transcendental change: the moment of birth and of death; rites of passage; the state between sleep and wakefulness or even pain. These experiences are so profound that they mean a before and an after for any human being. The elements that acts as a means of transport are water, both in falls and pools, which allows rebirth and redemption; and fire, simultaneously destructive ad purifying. The circle of life and death is a continuum. 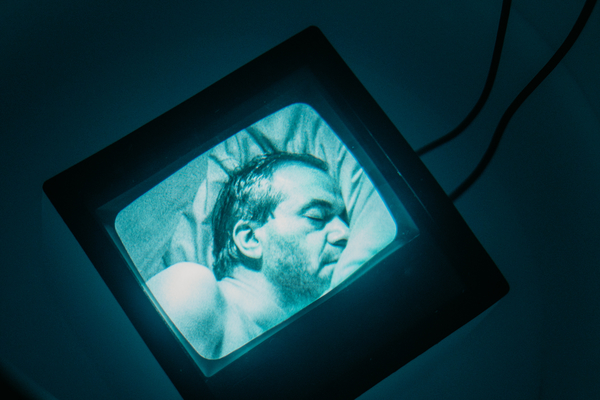 In the scenes by Bill Viola, journeys take place in neutral, intelligently illuminated spaces (Oh! Viola’s blue light!) or in places where time seems to stand still such as deserts or in water. The tempo of the videos, with the use of slow motion, has become a sort of trademark; highly studied synchronisation on the multiscreen; unsettling sound and complete silence; and an atmosphere created by the naked set and the everyday clothes of the actors helps the viewer to identify easily with  what they are seeing and awakens in them a kind of profound and internal memory  of forgotten and ancestral journeys.

It is then that we realise we have fallen straight into Viola’s trap. The same trap that sent a couple of viewers felling terrified from the room during the projection of Arrival of a Train at Ciotat by the Lumière brothers at the very start of cinema. Magic tricks, in fact, which use the technology of the moving image. Bill Viola is the magician who makes us believe that the work  Soul (2000) is made up of still photographs, even though you keep staring at it. You go to look at another work, turn around, and the three figures have moved, expressing joy, shame, anger and fear. The super slow motion has tricked our perception.

In the expression of human emotions, which was reflected so well in the series The Passions, Viola touches on a universal topic which connects everything to art history. Another facet of Viola’s work is his unabashed interest in medieval painting and the Italian Renaissance, but also in the history of photography and film-makers such as C.DT. Dreyer. In the show, one of the cases of this direct relation with art from the past is the five-screen work Catherine’s Room (2001), which shows the activity of a woman at home throughout the day, and inspired by the predella of Saint Catherine of Sienna by Andrea di Bartolo. 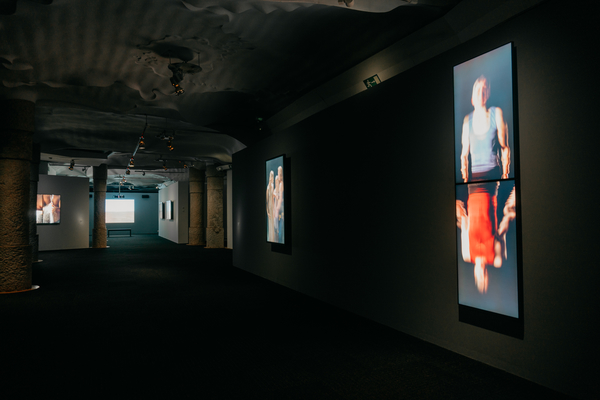 It is true that this exhibition at la Pedrera leave you with a certain feeling that it is only half there, because the low ceiling of the exhibition hall has meant it was impossible to include large format works, with giant screens, which offer the quality of the great show provided by some of Viola’s works. It is clear that maybe another institution should have put on this truly anthological display of work by Viola in Barcelona, and even more so when the artist has received awards here such as the International prize from the Generalitat de Catalunya.

The Fundació Catalunya La Pedrera has sought to work with other institutions to extend the show: Bòlit in Girona; the Museum of Montserrat; the Episcopal Museum of Vic and Planta. Fundació Sorigué in Lleida. As well as projections planned at the Palau de la Música, on 4 December there will be a White Night with large format projections at the Palau and the Gran Teatre del Liceu. But the exhibition at la Pedrera offers a delicate, precise and more intimate taste of Bill Viola’s art.

The exhibition Bill Viola. Mirrors of the Unseen can be seen at La Pedrera, in Barcelona, until 5 January.