The Most Christmassy Tradition of Barcelona

If there was ever a Christmas tradition that attracted more followers than the others, at least in the city of Barcelona, it would be to criticise the nativity scene in the Plaça Sant Jaume.

There are several reasons for this, but I suspect that mostly it has to do with the fact that it is basically such a banal topic. Banality provides fertile ground for people who enjoy discussions or mouthing off in bars or on social networks. 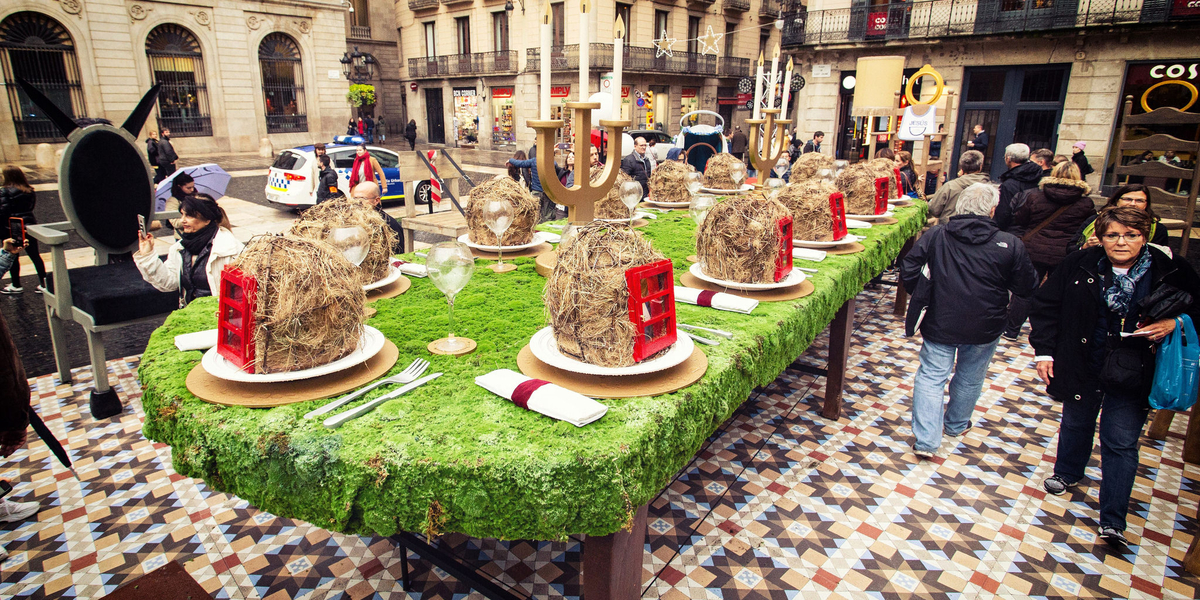 The truth is that nobody really cares about the nativity scene. Some people say it is for the children, but whenever I go there the children are always busy taking selfies beside it. Also, children get used to enjoying whatever is there – they are not weighed down by any kind of orthodoxy.  That is the true Christmas ritual: go to the plaça, take photos, maybe stop by for a sandwich at Conesa and above all, go home saying that the nativity scene is a disaster, that it gets worse every year and, whoever is in government at that time, they never respect tradition.

In fact, close to the Plaça Sant Jaume, the City Council organises a large nativity scene in the Marès Museum under the direction of the Association of Nativity Scene Builders of Barcelona. It can be found under the arcades, presumably to protect it from the rain. Also, very close by, another nativity scene is set up in the cloisters of the Cathedral, in pretty much a life scale model. On the ground floor of the Bethlehem Church on the Ramblas there is also a show of traditional nativity scenes, and another at the Mercader Palace and at the Diocesan Museum. I am sure there are more but in short, the range of classical nativity scenes on offer in the city centre is considerable. That won’t stop the criticisms of the Plaça Sant Jaume, though. That’s what happens when you have traditions. 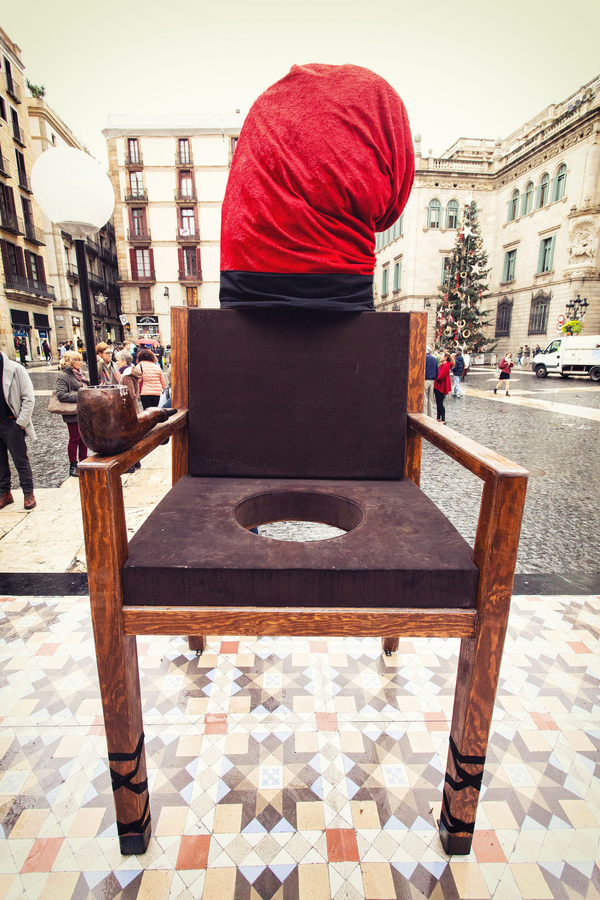 So now I have to admit it: I am a nativity scene fan in the style of Perejaume. I thought it might be a bit cheeky to call Perejaume, who I admire, a nativity guy, and I only did so in my closest circles, until I read in his catalogue for the MACBA exhibition   Deixar de fer una exposició: “Since the end of the seventies, when he started exhibiting regularly, the pictorial practice of Perejaume has been marked by his own search for methods of figuration and imagination: collage, nativity scenes, unpainting and oïsme”. Ever since then I have openly said that I am a nativity scene guy in the style of Perejaume. For me, the transformation of some cork oak bark into a mountain and some silver paper into a river seems fuller of symbolism than one of Duchamp’s urinals in an art gallery.

Having said that, let’s see what the installation in the Plaça Sant Jaume has offered (I don’t think the problem is calling it a nativity scene when obviously it isn’t). For quite a few years now the action carried out in this square has gone beyond the idea of a traditional nativity scene, with the understanding that anyone who wants an orthodox model has plenty of other opportunities to find one.

The critics called it the IKEA nativity scene

After racking my brains and doing a bit of research I found that the first example of an installation (what we might call the post-nativity scene) was in 2001 under the mandate of Joan Clos. On that occasion a group of architects created a kind of forest, with natural trees in sacks of earth. From then on there has been a bit of everything. In 2004 everything went mad. The typical human figures were substituted for normal people from the city and its professions. The shepherd turned calor gas man became quite famous. Hereu’s time was quite conservative but not without criticism. In 2010 there was a recreation of a family home with the nativity scene on top of a large chest of drawers. The critics called it the IKEA nativity scene. 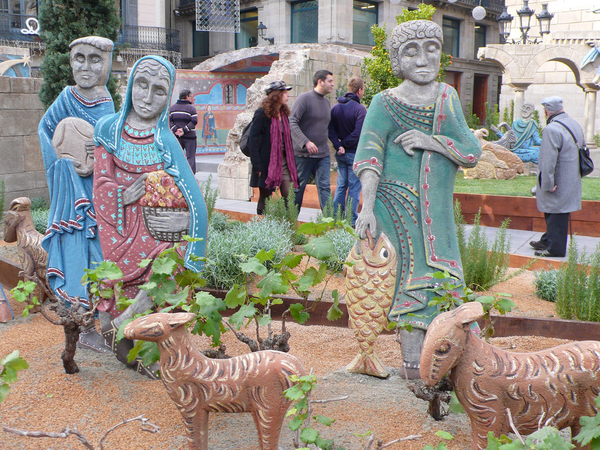 The following year the language of the Romanesque expressed in papier mâché did not make an impression, and neither did the baubles of Xavier Trias. In 2013, a nativity scene on the rooftops was quite popular…but not with everyone. What followed was a Roman nativity scene which could be seen from a ship’s galley. But this didn’t escape criticism either. In 2015 the cut-outs based on Christmas stories were deemed to be too modern. 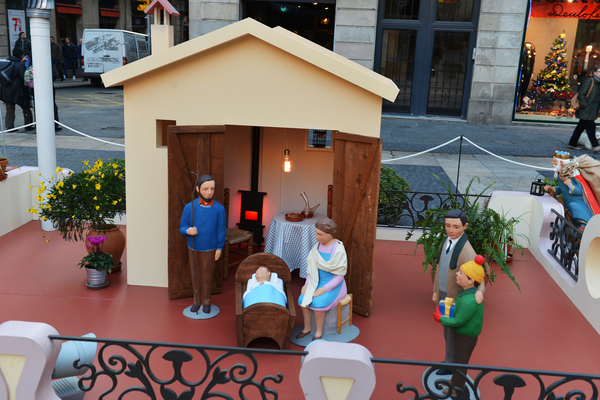 Colau’s team stormed in with a nativity scene of inflatable bubbles, simulating the property bubble that had become the running joke. Last year, conscious of the risk of large gatherings in the plaça an intelligent solution was sought: sticks – with the figures on top. It wasn’t popular, but it did turn out to be efficient in the frequent demonstrations. 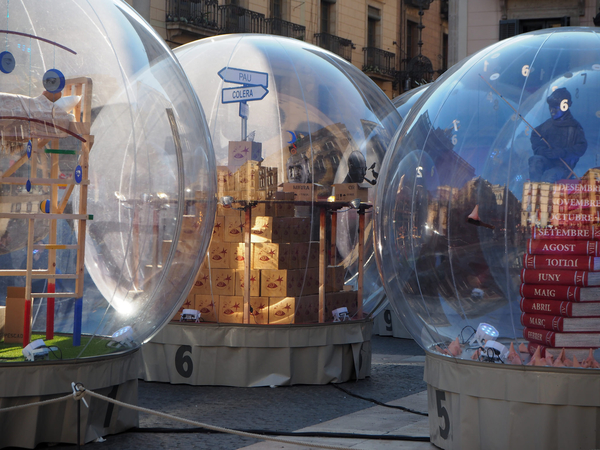 Finally, we come to this year. A set table with a language which is set between the old window dressers of El Corte Ingles and a film by Tim Burton, surrounded by seats which are the characters of the nativity: baby Jesus, Mary, Joseph, the ox and the ass, the shepherd, the angel and the caganer. 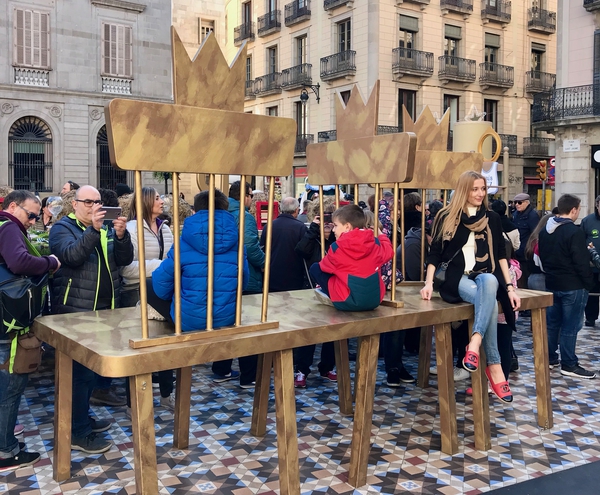 All of them out of scale, as if we ourselves were small again. And in fact, it is the children who best understand it. They clamber onto the chairs and ask their parents to take photos. A poem provides both meal and menu. The hydraulic-tiled floor situates us in the Eixample of Gulliver’s Travels where we are the little people. This is a piece which demands interaction and the public responds with aplomb. Maybe afterwards they will go and have a hot chocolate in the carrer Petritxol while they slag off the nativity scene, just to keep up the tradition you understand.