The Motor Car in Catalan Art

As a result of the age of its own invention, the motor car cannot have been a theme in art much before the turn of the twentieth century.

However, being a modern contraption with no aesthetic pedigree, it would take some time for it to become a full part of the thematic panorama of Catalan art. Painters seemed uncomfortable painting thing that were not timeless, and although they began to see automobiles in the street they tended to ignore them when it came to choosing motifs for paintings which were destined for serious exhibitions.

The most visible exception to this is undoubtedly Ramon Casas, who was a car enthusiast from the start and also had sufficient family resources to not have to worry about the fashions or demands of his potential clients. So the motor car appears quite naturally in many of his works, from very early on.

In 1901, in the “Els 4 Gats” tavern, of which he was one of the promoters, he painted a large format oil (now in the National Art Museum of Catalonia – MNAC) of himself and Pere Romeu, who ran the tavern. Both were wearing large fur coats which almost obscure them from view and travelling in one of the first motor cars in the country. It would come to be like an allegory of the twentieth century in the same way that The Tandem – a work of the same dimensions, but with two people on a tandem bicycle (also in the MNAC) – had hung on the walls of “Els 4 Gats” in the last years of the nineteenth century, since it was painted in 1987. 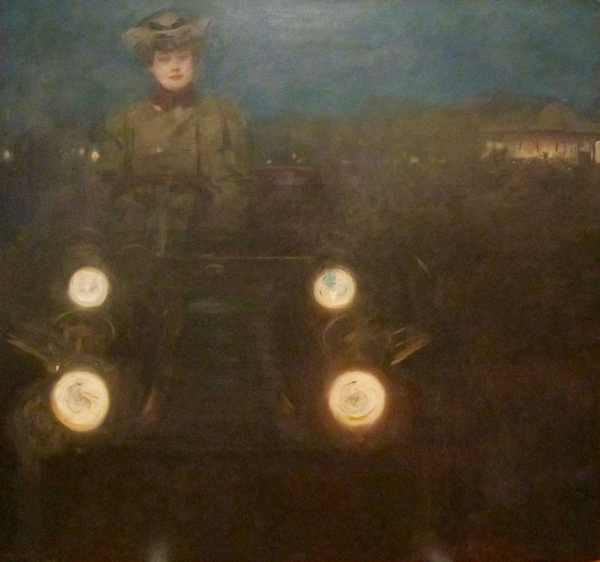 Casas’ most spectacular work on the theme of the motor car still has to be the panel in the rotunda of the Cercle de Liceu de Barcelona (1902) which represents a large car at night in the foreground, with bright headlights shining almost insultingly towards the viewer, while in the background a small orchestra plays in front of a building that is none other than the pavilion built by the Cercle for the Universal Exhibition of 1888. An automobile is also the protagonist in one of the tiles of the series The Advances of the 19th Century which Casas made to reward the subscribers to his magazine “Pèl & Ploma” (Skin and Lead) in 1903. And the fact is that Casas was such a lover of cars that he even printed one in colour with him at the wheel as his letter head. Later on Casas continued to include the odd car pre-eminently in his paintings, such as the The Depot in 1907 (private collection). 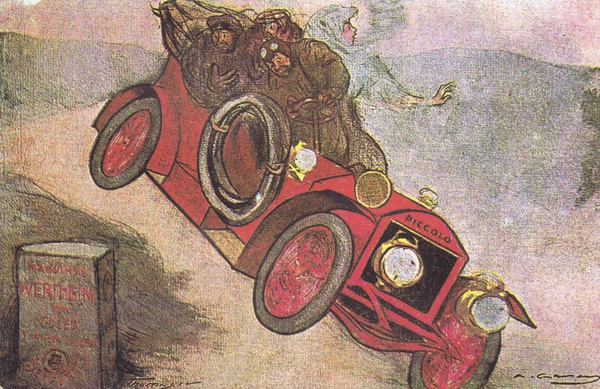 In the most popular graphic arts there was not the same aversion to motor cars as there was in “serious” painting. Apel·les Mestres – who had actually chauffeured for Casas on occasion – did not have any problem putting cars on the picture cards (c. 1911) that he drew as advertising collectables for chocolate and other products.

Other satirical draughtsmen often showed petrol-driven cars in their works, when these were still a novelty. Joan Junceda and Ricard Opisso, at least, included the automobile in their jokes in “¡Cu-Cut!” in 1904, as Josep Aragay , singed Jacob, would do in the “Papitu” between 1909 and 1911, where he even showed races, and later on from 1924-25 in El Borinot”. Such a bucolic noucentista painter, Aragay showed himself to be quite an addict when it came to including motor cars in his satirical works, and he also often included motorcycles and aeroplanes. 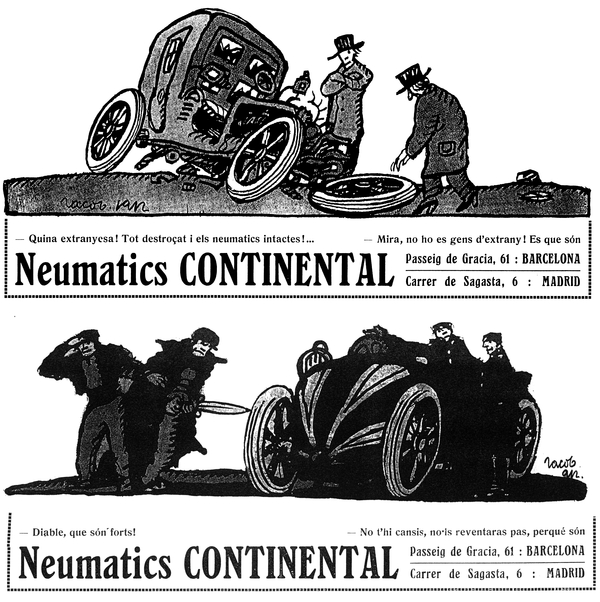 The poster was another genre without topical prejudices: here the priority was not “art” but efficiency and communicative capacity. Ramon Casas made posters for motorists (Auto-Garage Central, c. 1903, Copa Catalunya, 1908, and Real Automovil Club de Cataluña. Copa Tibidabo, 1914), and later Dionís Baixeras would also create elegant posters for the world of motoring (1920- c 1923).

Pere Torné-Esquius, who habitually practiced as an illustrator, also sometimes gave centre stage to motor cars when he painted. In his Courtship in oil, most likely from 1903, and now in the collection of Artur Ramon, where two lecherous-looking scoundrels try to pick up two young girls using the attraction of their motorcar as bait. The painting has a communicative freshness about it which seems more like a graphic sketch than an exhibition painting.

On the other hand, representing motor cars in a decorative style was not so unusual either. On the main floor apartment of the Casa Burés in Barcelona – a richly Modernist building, there is a dining room containing several reliefs with a sports theme by Joan Carreras i Farré from 1902 to 1904. One of them shows motoring.

One serious painter, and the strong arm of Modernism, Lluís Graner, also used the motor car in the foreground of one of his oil paintings. However, this was during his period in the United States, since he never strayed from his topic of landscapes, interiors or genre painting during his time in Catalonia, often using strong contrasts of lighting as his trademark. In The Two Sisters,  exhibited in 1916 in the Lawlor Galleries in New York and now in the Hispanic Society of America, a motor car appears in the foreground with its headlights creating those contrasts typical in Graner.

Obviously, it is not such a conceptually daring work as the futuristic racing cars of Giacomo Balla who was working at roughly the same time, but his theme was still much of a liberty in the field of painting at the time. 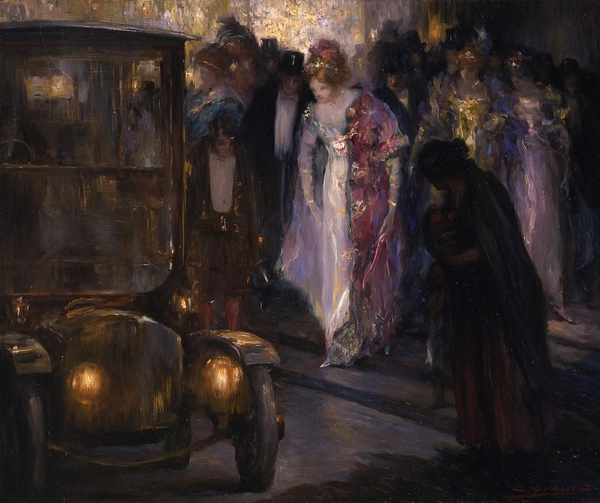 Ramon Casas was a pioneer in this theme and continued painting it, but gradually several painters of the 1917 Generation started to include cars in their urban landscapes, a pictorial genre which would flourish more than ever from 1930 on in the main art exhibitions, and which especially centred on Barcelona.

In April 1929, Josep Mompou, the creator of a personal Fauvism, headed up the catalogue of his solo exhibition in the Sala Parés in Barcelona with an oil painting entitled Autos, only known to date from black and white photographs. It was the same exhibition in which he presented other works reflecting the modern world such as Tennis, Boxing and Dancing. So the trepidation of showing paintings centred on sport in an art gallery seemed to have disappeared. Like many of his colleagues, Mompou used the motor car as a chromatic stimulus integrated completely in urban life, so often painted with the dynamism of the Fauvist line to which they belonged. 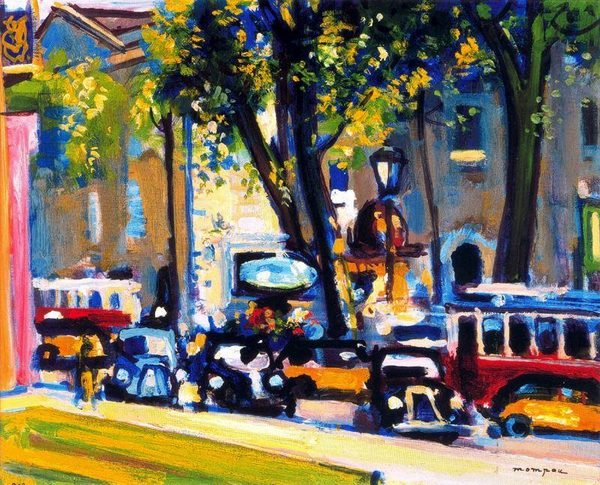 In the autumn of the same year, Xavier Güell, natural of Tarragona and a unique and versatile artist, dared to present at the Modern National and Foreign Art Exhibition at the Dalmau Galleries in Barcelona, organised from Paris by Torres-Garcia. The work was the sonorous Asphalt, which included a car horn, making him one of the first, albeit fleetingly, Catalan Avant-garde artists. The work was shown next to other by Mondrian, Arp, Van Doesburg, Freundlich, Hélion, Lhote, Planell, Sandalinas and also, of course, Torres-Garcia, among others, and was bought by France after which nothing more is known about it. But it was certainly celebrated and at the same time reviled in Catalonia during its time.

The car was a very characteristic element of the petit-bourgeois world.

During the Spanish post-war period it was not unusual to see automobile themes in the art galleries. In 1955 on a trip to New York, Josep Beet Espuny, from Tortosa, changed the Gothic cathedrals and medieval palaces that were familiar in Europe for skyscrapers and great piles of cars in large parking lots at a time when this was not really seen here. 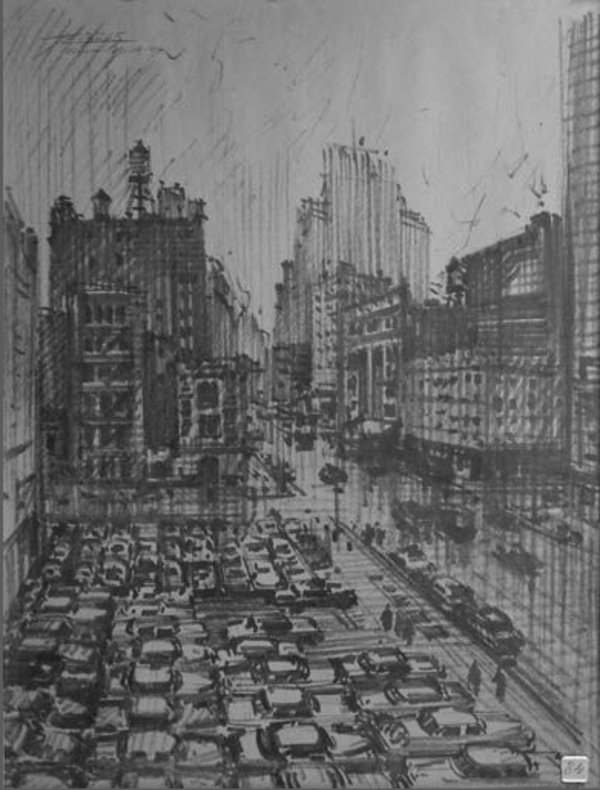 Even then you still saw more motor cars on posters than in paintings in galleries. Tomàs Vellvé created imaginative posters for the International Motor Show in Barcelona in the 1960s and 70s. And cars also appeared a lot in comics: to give just one example, in the Ulysses Family by Marino Benejam in “TBO” the car was a very characteristic element of the petit-bourgeois world that he wanted to reflect. 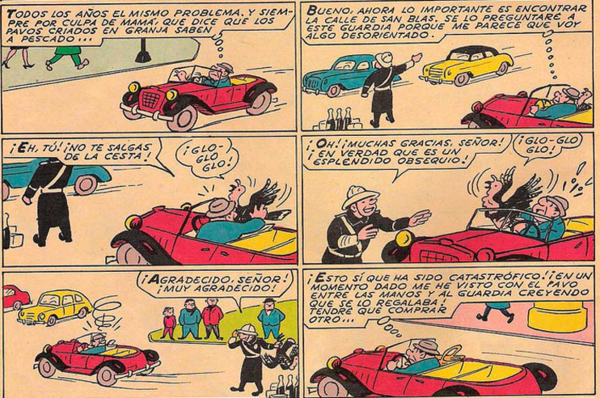 With the success of the second Avant-gardists, artistic criteria changed radically. As part of the MAN new art exhibitions in Barcelona, painter Amèlia Riera was behind an impressive group exhibition in the central thoroughfare of Rambla de Catalunya in 1974, where the best Catalan artists of the time each manipulated the chassis of a car – which Amèlia had managed to get of herself through her friendship with the director of the SEAT plant – to produce explosive creations. Apart from her, those taking part in the chassis exhibition, generally with vague pop influences were J.J.Tharrats, Arranz Bravo & Bartolozzi, Joan Vilacasas, Ràfols Casamada, Artigau, Hernàndez Pijuan among many others, such as Jordi Pericot, the most talked-about (but not written about, obviously – this was in the middle of the Franco dictatorship and censorship was at its height). A car painted grey like the armed police, the windows of which exuded a magma-like ochre-coloured mass that made you think of shit.

There are many other examples in many other genres, but this is an article for information and not a motoring handbook.