The Movies According to Stanley Kubrick

The first characteristic to define Stanley Kubrick and his movies is his extremely high and exceptional ambition. Well-known and often cited is his declaration of intention which to many may seem arrogant: “I expect to make the best movie ever made”. There will some who, after the failure of his most ambitious and unrealised project, defined his non-movie about Napoleon Bonaparte as his “best movie never made”. But it was said as much in admiration as irony.

I think Kubrick (New York, 1928 – Saint Albans, England, 1999) belong to that species of movie directors which could include Abel Gance, Orson Welles and Terrence Malick, and also Francis Ford Coppola of Apocalypse Now fame. These are directors who, for their personality and artistic ambition sometimes have a tendency for grandiosity or excess in a superproduction. It is true that the pretension of achieving a brilliant style at any cost can led to an emphasis on the excessive, or “overplaying” the elements of style and authorship.

However, the problem does not exist as long as the depth of vision is at the same level as the artistic pretensions. It is also true that some directors have managed to make both their cinematographic language and the human condition more profound without the need for that grandiloquent tone. That was the case, for example, in such film masterpieces as Ukigusa by Yasujiro Ozu, Apur sansar by Satyajit Ray, Shichinin no samurai by Akira Kurosawa and The Man Who Shot Liberty Valance by John Ford.

Fortunately, Kubrick knew how to temper his tendency towards grandiloquence with self-critical level-headedness and lucidity. And that is how he was able to reach such exceptional greatness in works such as 2001: A Space Odyssey (1968), Barry Lyndon (1975) and The Shining (1980). It is a difficult and infrequent achievement with a musical equivalent in some of the early work of King Crimson (1969-1974). 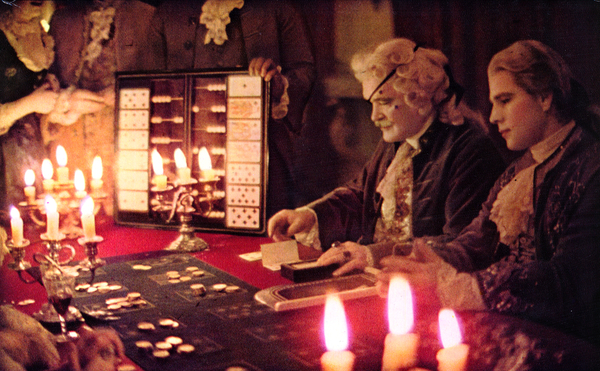 Kubrick’s work, like that of Hitchcock and Kurosawa, can be used as definition of what auteur cinema is. In other words, to define exactly what the element of authorship is for a movie director who films and composes a work from a previously conceived story by somebody else: a novelist who is obviously co-author of the movie – albeit involuntarily or even posthumously – as much as the director and the screenwriter or screenwriters. This is something rarely recognised by the critics and historians who are still believers in and confused by the self-promoting myths and dogmas of the old “Cahiers du Cinéma”, which only set up the pedestals for the figure of the director.

Kubrick is a good example of an author as an individual and also as a collaborator, especially compared with others who in addition to directing and co-writing, came up with all the ideas for the best plots and scripts themselves, such as Ingmar Bergman. Anyone who knows the history of cinema could get in less than half a minute, without any outside help, the authorship of films like Persona by Bergman, Amarcord by Fellini or Lancelot du Lac by Robert Bresson. Faced with a movie by Kubrick that our hypothetical movie-goer did not know, he might take a few minutes to guess the authorship. The reason, above all, is because Kubrick changed according to the subject and genre he was dealing with in every film. However, there are some recognisable stylistic and thematic features in his work. 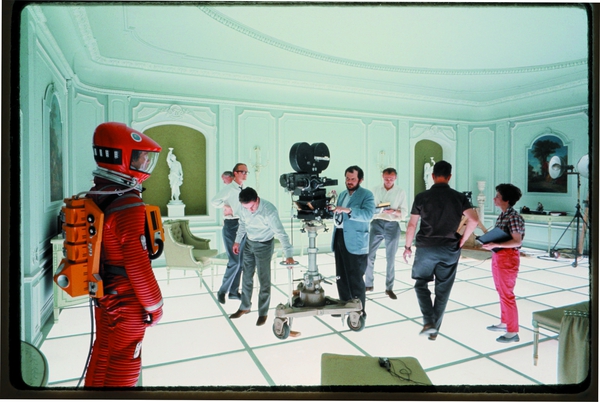 2001: A Space Odyssey, directed by Stanley Kubrick (1965-68; GB/United States). Stanley Kubrick and his team on set during the filming. © Warner Bros. Entertainment Inc.

The first of those is an exceptional capacity for expressing himself through images, which manage to summarise an essential part of the much wider content of a work. For example, the famous cut between the prehistoric flying bone and the spaceship in 2001. This is perhaps the clearest example in cinema of union over the abyss, a practice with its origins in Surrealism which continues to be valid in art and poetry. But there are other examples of images which provide summaries or essential elements. One of the best is provided by the tracking shots in the mazes of The Shining – inside the hotel and on the snow-covered lawn. Everything in that film tends to duplicate itself, like Jekyll and Hyde: the presentable young man, the hidden killer. Or the uncanny discovered in the familiar, according to Freud. These mazes, which allude to the hidden monster of Greek mythology, the Minotaur, were not present in Stephen King’s story. 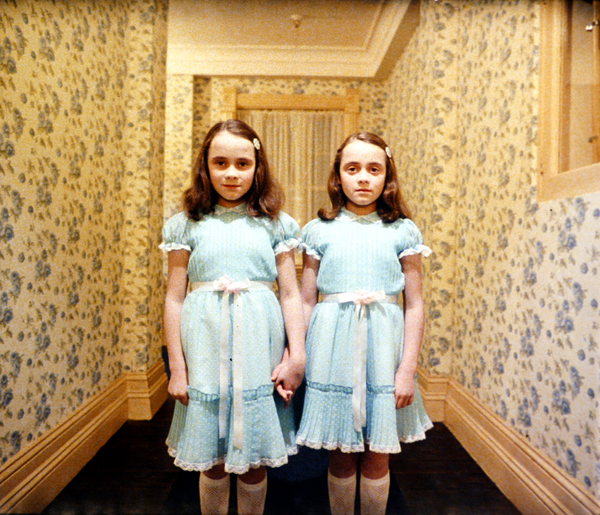 Kubrick is an extraordinary director both in the narrative concision through which his movies become poetic images, and in his expansiveness where necessary. Among some of his best decisions as a director is his collaboration with Arthur C. Clarke for 2001, to produce a narration which is also an essay and which, like the best poetry, has many complementary and uncontradictory layers of meaning which can only been revealed after several readings or viewings.  But I would also like to point out some of the less obvious choices. First, the decision to distance himself from the ‘arriviste’ character of Barry Lyndon, turning the first-person narrative of William Thackeray’s original into a third person which does not make identification with the main character easy.  This was a lesson learned following the ultraviolence of the main character in A Clockwork Orange (1971), which was unfortunately imitated by some of the viewers. 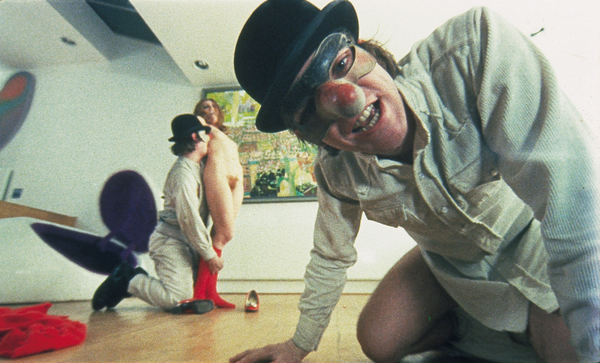 Another great decision, and one that was suggested by the co-writer of The Shining, Diane Johnson, was to present the spirits in the hotel as bodies capable of physical action: serving drinks, for example, before the family massacre. In that film, Kubrick raised the bar for the horror genre and composed an essay on evil. One of the keys is the saying repeated by father and killer writer on many pages of his manuscript: “All work and no play makes Jack a dull boy”. Excessively holed up with his family combined with an unfulfilled creative vocation produces that frustrated energy which turns into destruction…beginning with his own family. That is how evil, its darkness generally hidden, appears in The Shining in the form of brilliant clarity, in elegant and well-lit places, in a hotel built on a sacred ground, an ancient Indian cemetery that evokes the American genocide: British migrants armed with guns slaughtering the indigenous populations. 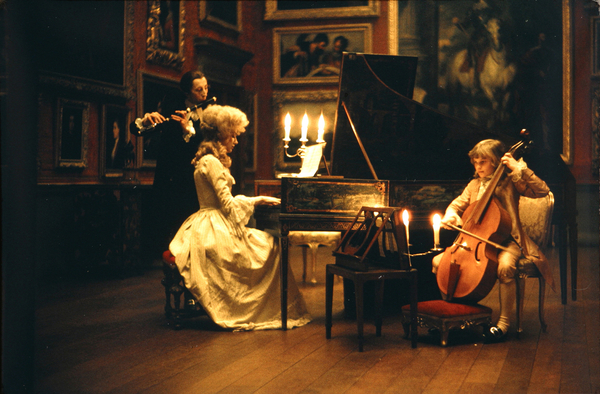 Another of the main stylistic features of Kubrick is his use of music. While most directors use music as an easy speaker to strengthen or even awaken emotions and feelings, and while directors such as Bresson and Buñuel clearly reject this resource as being too easy, preferring, like Jacques Tati to use sounds, Kubrick opted for a no less radical path: he used music as a fundamental and meaningful part of his movies. The music is extremely significant in 2001, and in fact you cannot understand it if you do not know about Nietzsche’s concept of Übermensch, or superman, conveyed through the music of Strauss: Thus Spake Zarathustra. 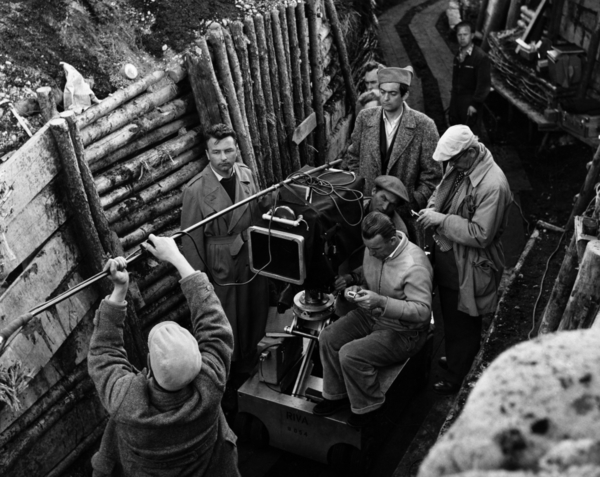 Paths of Glory (1957; United States). Stanley Kubrick on the set of Paths of Glory. © Metro-Goldwyn-Mayer Inc.

The music of composers like Ligeti, Penderecki, Händel and Schubert, among others, is essential in three of the four movies by Kubrick which are for me his main masterpieces: 2001, Barry Lyndon and The Shining. The fourth, for me is Paths of Glory (1957), the best ever anti-war movie, against the commanders that promote and benefit from it. It was the movie most feared by the political powers, even the “democratic” ones, and experienced the longest censorship in history in countries such as France and Spain.

Music had already acquired a special value in Dr. Strangelove (1964). It was in that movie, made at the height of the Cold War, that a few naive and trivial songs representing an ideological and political lack of awareness accompany the real danger of nuclear war. The series of atomic explosions in the apocalyptic final is met by an unexpected and implausible song: “We’ll meet again / Don’t know where, don’t know where…” We will meet again at the end of the world. 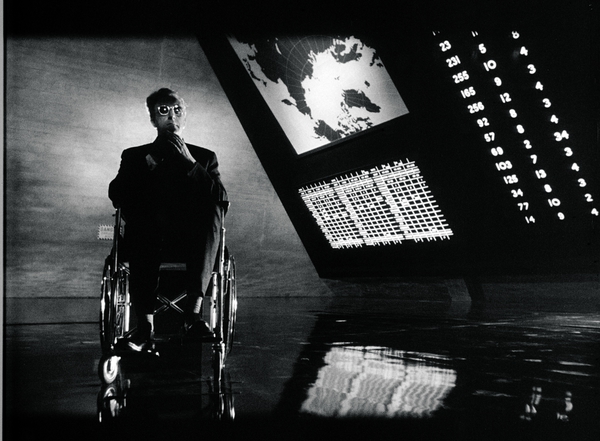 The Sense of the Work

It is not true, as some believe, that all works of art or literature are reflections on the human condition. This is only achieved by the best. Kubrick’s movies offer some intense audio-visual experiences but are also specifically cinematographic reflections on several fundamental aspects of the human condition. For example, vanity as the cause and driving force for catastrophic lives, interpersonal violence and institutional and legal violence against individuals and the difficulty in fighting it. Or what is evil, sinister and unrecognised, which is perpetrated precisely because it is not recognised. Or destruction as the deflection of unexpressed creative energy (The Shining).  Or the double life of sexual desire in its repressed existence and in its phantasmagorical dream state (the marriage and adultery in Eyes Wide Shut, 1999). Or the historical and evolutionary adventure of the human species itself, from animal innocence towards spiritual knowledge by way of a phase – the current one – of technocracy which is not yet wise.

And all these themes are interconnected. Rebellion against the destructive HAL computer in 2001, prior to the spiritual and liberating phase of the superhuman being (not quite “too human” now) imagined by Nietzsche, is not so far from the anti-slave and anti-imperialist rebellion of Spartacus.

The exhibition Stanley Kubrick can be visited at the CCCB in Barcelona until March 31, 2019.