The Polyptych of the Vallès

A fixed shot of the warehouse of an abandoned textile factory. It is in the centre of Sabadell and the only perceptible life is that in the street and crawling in through the huge windows. The sound of an ambulance, the shadows of passers-by…

It seems that nobody remembers the activity that took place within these walls, not so long ago. The distant sound of looms reminds us. This was the soundtrack for so many town and cities in the Vallès up to what seems like just days ago.

The factory, the workers and Vallès Occidental are the protagonists of this video installation which multitalented artist and film-maker Claudio Zulian is showing in the Virreina Centre de la Imatge. Without wanting to be nostalgic, or documentary or even too specific, Zulian has created a visual polyptych with seven screens which make up a narrative with a beginning and an end. 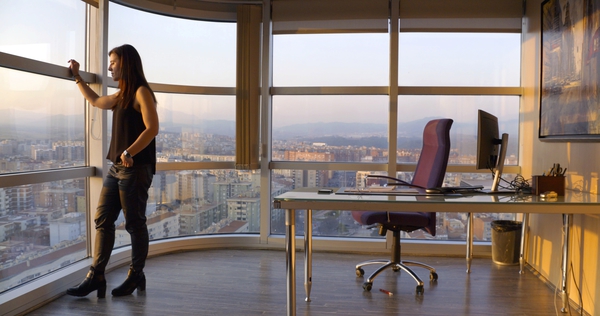 The piece is a journey through time, from the industrial past of a country that does not have a “dissident” artistic image of the world of workers – as Ripollet-born Valentí Roma, director of La Virreina and curator of the exhibit, makes very clear – to a future which here is also the present. The workplaces are the factory, the office and the streets, such as those in the Maurina neighbourhood of Terrassa, built by the first inhabitants with their own hands, or those in the Ripollet industrial park, where some of the young people, children of immigrants, are walking forward to recreate the moment when the immigrants reach their destination.

But the exhibition is much more than the work which is being projected now at La Virreina. It is the culmination of a two-year process which has taken the project to Sabadell, Terrassa, Ripollet and Cerdanyola del Vallès, with different partial versions, as well as workshops, round tables and talks in each of the places. The process itself has been as or more important than the final piece.

Zulian’s journey through the space and time of the Vallès has certainly been worth it. The final Polyptych creates a symbolic space of great visual potential, through fixed shots and dolly shots, which the spectator has to complete not only mentally but also using the physical path that they need to take between the different room of the Floor 0 of La Virreina.

It is true that at first sight, the piece could seem oversimplified. It is a work without noise or slogans but there are some important details, such as the little girl in the fantasy painting by Joan Planella, from 1882, which in Zulian’s work is moved from its place of exhibition to the silent vault of the Museum of the history of Catalonia. Or the girl who hopes to resolve something or another in her stressful daily routine, from within an office with a view. This is the present in the world of work which no longer takes place on the factory floor but is also held up by chains.