The Resurrection of Gustau Violet

It cannot be said that Gustau Violet (Thuir 1873 – Perpignan 1952) was a popular artist in Catalonia. Neither can it be said that he was an unknown: in the bibliography on twentieth century Catalan art he almost always appears, and he is present is some museums.

But the man in the street would be none the wiser. Probably because he was from Roussillon and not the Empordà or the Garrotxa, for example. However, now there has finally been a strong revival of interest in Violet, and not only in Roussillon. This time in southern Catalonia too. 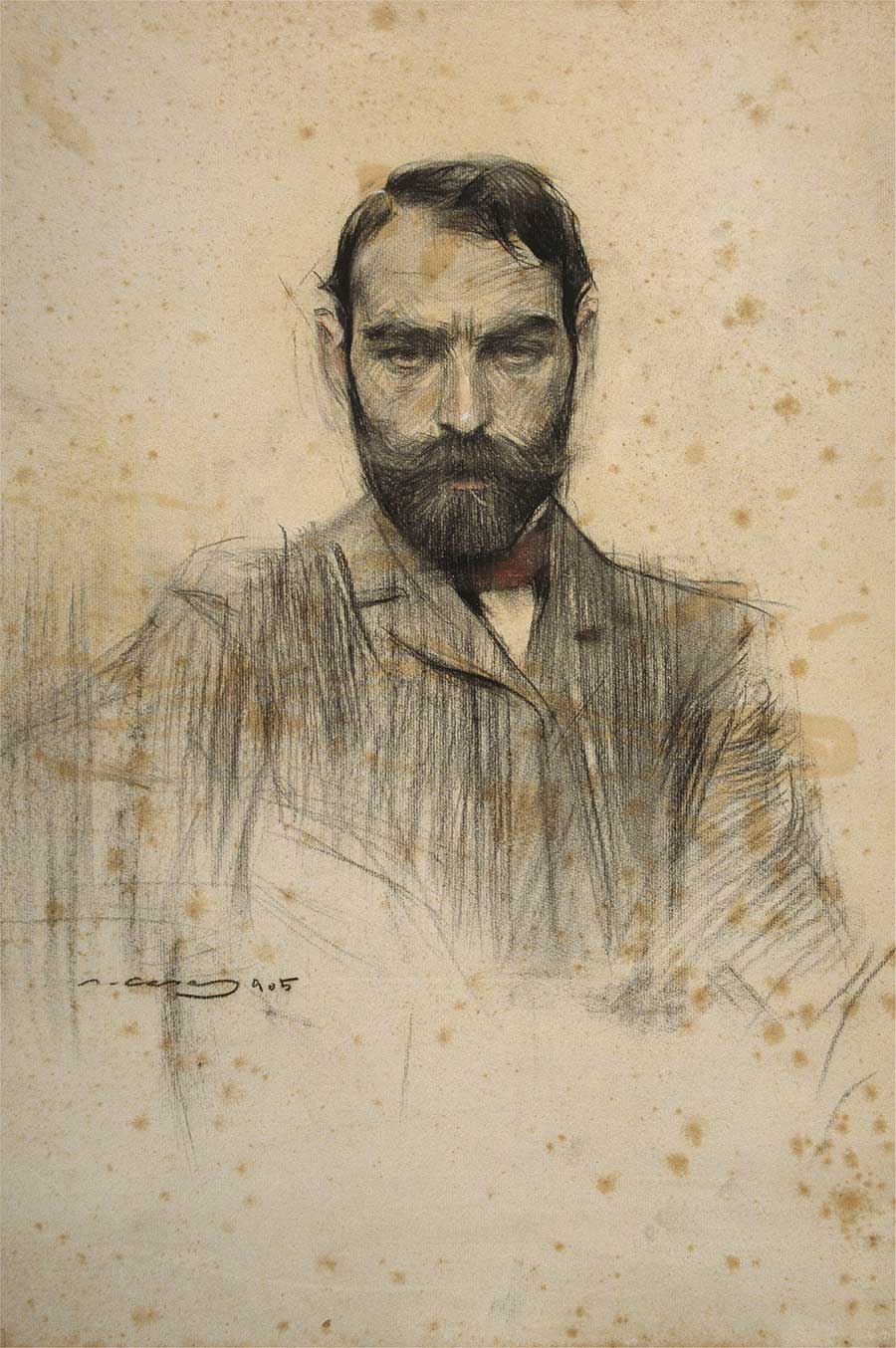 Violet was a truly original artist and his work bore no resemblance to conventional art. He actually qualified as an architect in 1897 but is much better known for his work in different areas of the arts, mainly sculpture. He had his own style, which didn’t resemble that of the official sculptors such as fellow Roussillon’s Raimon Sudre, or the more modern artists such as Rodin or his friend Maillol. Violet carved out his own path, lined but not mimicking modernity. He broke with the tradition of the successful academic sculptors of northern Catalonia, who had become incorporated in the official movement of Paris, such as Alexandre Oliva and Gabriel Faraill. 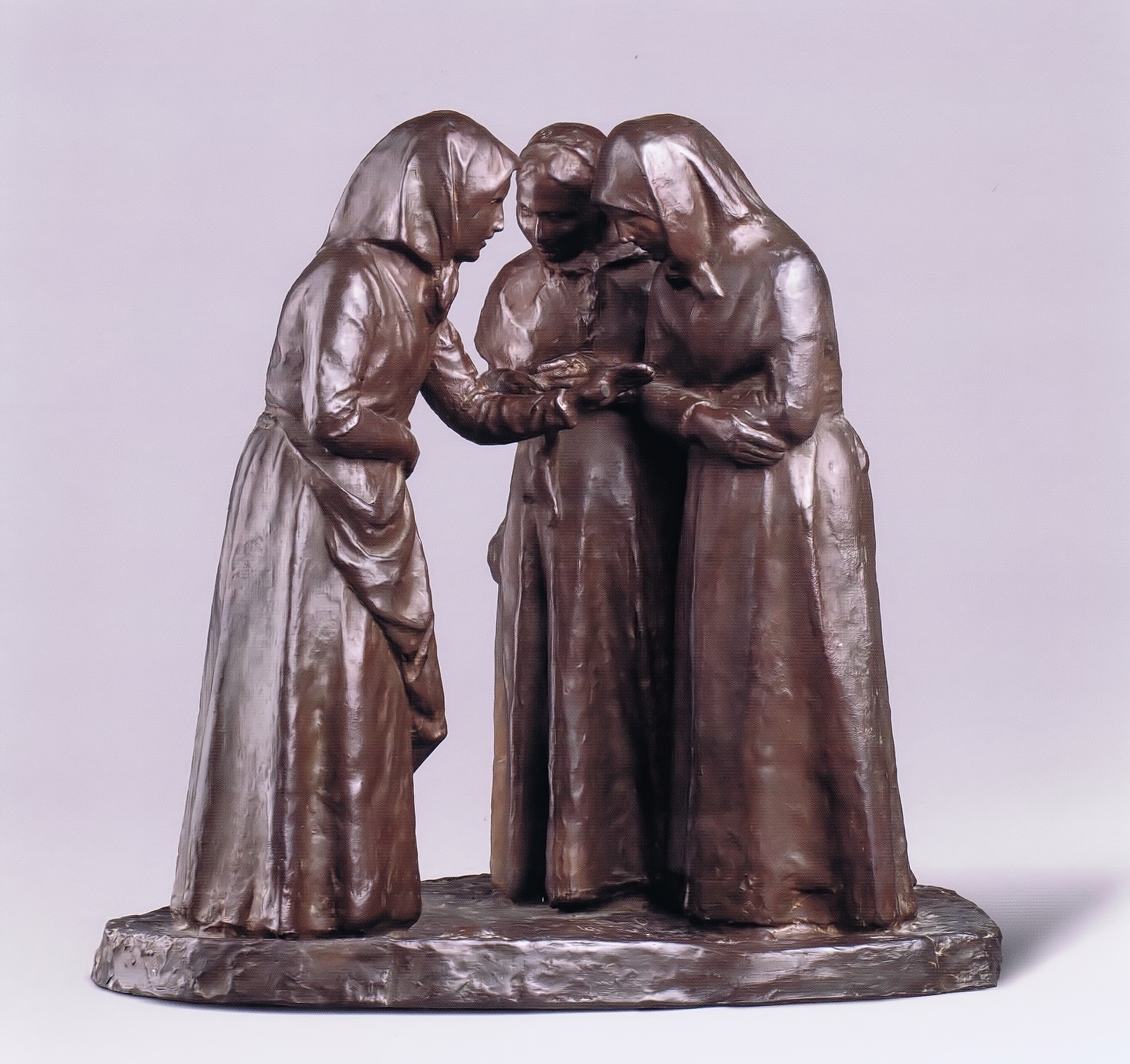 For many years now in Prada, where Violet lived, Ramon Gual has been constantly promoting him. In the summer of 2014 he commissioned a solo exhibition of the artist in the spacious premises of the Pau Casals College – the headquarters of the Catalonia University Summer School. His latest initiative is the publication of an extensive catalogue (over 550 pages) of the works of Violet (Gustau Violet. Catàleg de les obres d’un artista català, singular i plural, testimoni del seu temps, Terra Nostra, Prada 2018), which was produced in collaboration with his wife Mònica Batlle and published in a bilingual edition in Catalan and French.

Gual is no academic – he is an activist. You only have to see how, at over eighty years old, he still plays football on a full-sized pitch. His monographs and other initiatives are basically the result of his great enthusiasm, in this case for Violet – an artist that has always motivated him to the limit.

In this highly illustrated volume there is a huge collection of works by the artist (sculpture, drawing, illustration, ceramics, ironwork, architecture, and more) as well as documentary and family photographs which bring him closer to the reader. These are not only small pieces but entire monuments, tombs and works applied in architecture. The book is the result of pure fieldwork and, as yet, there is no bibliography – something which will appear, according to the author, in a second volume. Violet was very prone to duplicating his work and making series without numbering them for exhibition. In the note for each piece Gual & Batlle mention the number of known works but they do not tend to give the particular locations.

Violet has also received attention at the universities, In her doctoral thesis, L’invention d’une Méditerranée: patrimoine, création et identité en Roussillon. Fin XVIIIe siècle – Entre-deux-guerres, by Marie-Hélène Solère-Sangla, presented at the University of Toulouse-Languedoc in September 2011 (and later published by Presses Universitaires, Perpignan, in 2017), Violet stands out in this context of increasing awareness of the collective cultural personality of North Catalonia, which has possibly never been analysed in such depth until now. 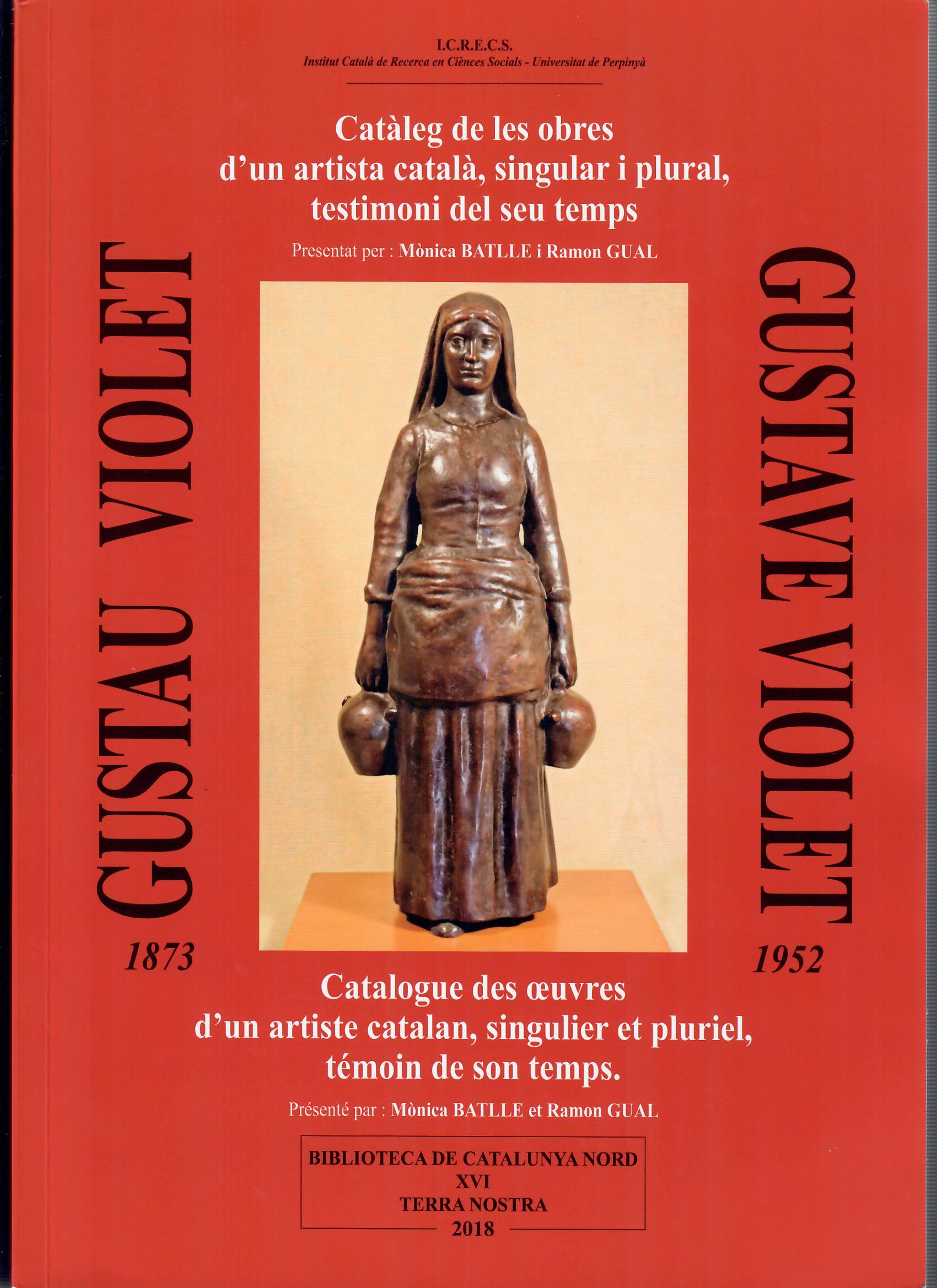 In fact, in the final chapter of the original thesis (which I have easy access to having been on the viva panel) just before the conclusions, Violet is the clear protagonist. For around thirty page the author draws from magazines such as the Revue catalane, La revue du Palais, La Veu del Canigó, el Bulletin de la Société Agricole Scientifique et Littéraire, La Tramontane, La Clavellina and the Bulletin catalan testimonies that help to sketch out the thoughts and activity of Violet. There is evidence of an exhibition of Fina Art in Béziers in 1901, the first time Violet exhibited his work in public and where he had the opportunity to see Joaquim Sunyer, and to forge links with the modern catalan art of southern Catalonia. Sangla also underlines the call that Violet made to the other artists of Roussillon in 1907 that art had to be “regional”, alongside other details that gave the artist a place in the unveiling of contemporary Catalan art, and more specifically that in Roussillon.

One of the most recent events to herald Violet as an artist is the anthological exhibition in Sitges this year L’escultor Gustau Violet. Art, pensament i territori, which will be open until 21 October in the Palau de Maricel, which is accompanied by a highly-illustrated, extensive new catalogue of 215 pages (also available in a bilingual Catalan-French edition) and several original texts analysing his character from different angles by Ignasi Domènech, Ester Barón (the two curators of the exhibition), August Bover and Eric Forcada.

The choice of the Palau de Maricel to host the exhibition could not be better since Violet already had work there and, as a friend of Miquel Utrillo, he should have been the sculptor of the medallions which were to be incorporated in the connecting bridge over the Carrer de Fonollar – a commission that did not see the light because the outbreak of the First World War meant that he had to enlist as the French subject that he was.

The exhibition also embraces the role of Violet as a man of letters, since aside all his other artistic specialities he was an active writer, especially remembered for his two-act play La font de l’Albera (1922), written with Josep-Sebastià Pons. The play should have been set to music by Déodat de Séverac but due to his early death it was finally scored by Enric Morera. This section of the exhibition has been curated by August Bover. 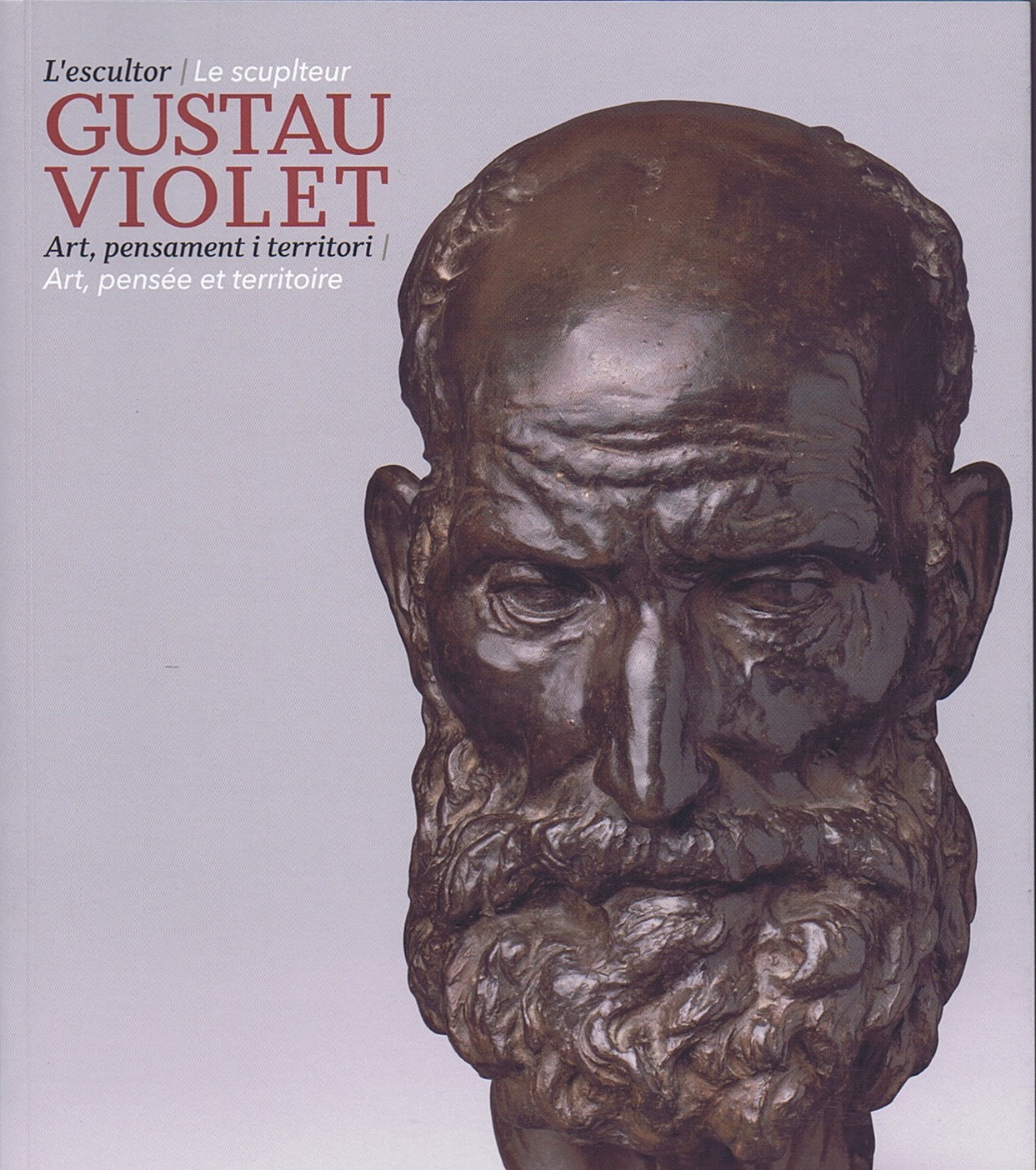 Unfortunately, among the Catalans on either side of the Albera Massif, political circumstances made a logical relationship difficult. In the field of the arts, however, Violet was one of the exceptions. He was in contact with Rusiñol, Utrillo and Casas, and was aware early on of the work that ceramicist Antoni Serra i Fiter was making in his studio in Poblenou. He also exhibited alongside other artists from Roussillon in the Sala Parés in Barcelona in 1905; he invited brothers Miquel and Llucià Oslé, also sculptors, to his studio in Prada in 1906 and worked with ceramicist Francesc Elias. He was also in contact with the Marco brothers who worked as ceramicists in Quart d’Onyar and the sculptor Borrell Nicolau visited his studio in Prada. He was also in contact with the Noucentista painter Joaquim Sunyer and assisted photographer Adolf Mas in his photographic projects in North Catalonia. He had a solo exhibition at Santiago Segura’s Faianç Català in Sabadell in 1914 and was good friends with the painter, art historian and caricaturist Feliu Elias. He would also form a great relationship with the exiled Pau Casals – an aspect of his life which I cover in my book Pau Casals col·leccionista d’art (2013), and which has hitherto remained unhighlighted. In short, the link between this great artist from Roussillon and southern Catalonia was constant.

The exhibition does not only show the work of Violet but also work by his contemporaries from Roussillon, such as Monfreid, Terrús, Bausil, Fayet, Auberge de Garcias, and, of course, Maillol, all members of a consciously anti-academic and at the same time anti-provincial group, although some of them still took advantage of the platform that Paris offered. Examples would be the younger artists such as Marcel Gili, and the abovementioned artists from southern Catalonia and others such as Casanovas, Manolo Hugué, Pere Jou o Miquel Paredes.

Violet was an artist in the fullest sense of the word, nurtured by Gauguin’s idea of seeking in primitivism (without falling into the rudimentary, however) the source of a new path for art. His friendship with Daniel de Monfreid, a close friend and executor of Gauguin, was clearly a positive influence in this aesthetic criterion. But the result of his work was a personal line in which he often seemed to align (without fitting precisely) in the Noucentisme of the artists of his generation in southern Catalonia, and some of those from the North such as Maillol who were rapidly achieving prominence. In the same say, towards the nineteen twenties his work became a personal interpretation of the Art Deco style.

Violet always maintained a strong sense of Catalan belonging, demonstrated when he declared to Pau Casals in 1946 that they were compatriots and that the artificial border would never separate the two countries; that they shared the same roots, which, for those from Roussillon, was a great source of pride.

All of these efforts and contributions, quite different in themselves from Gual to Sangla and the exhibition in Sitges, have curiously taken place without much contact between them. It is probably the case that there are few of us and we do not know each other, but the positive outcome is that today we know much more about the outstanding artist that Gustau Violet was, and that from now we will be much more aware of him and his work.