The Vampire Canon in Film

Beginning on Tuesday 12 January the Fear and Pleasure. Vampire Movies programme at Caixaforum Barcelonaoffers a weekly programme of five movies that show how the atavistic and shadowy figure of one of the most persistent characters in the history of film has abandoned its spooky extension across the floor to morph into a more domesticated monster.

This Gothic, aristocratic personage that conquered our screen and became the start of vocational filmmaking, was created in the European literary and romantic context of the nineteenth century at a time when cemeteries and abandoned buildings had become tortured spaces for those walking through them, when the night had a ring of freedom about it, and the consumptive ‘look’ was in fashion. 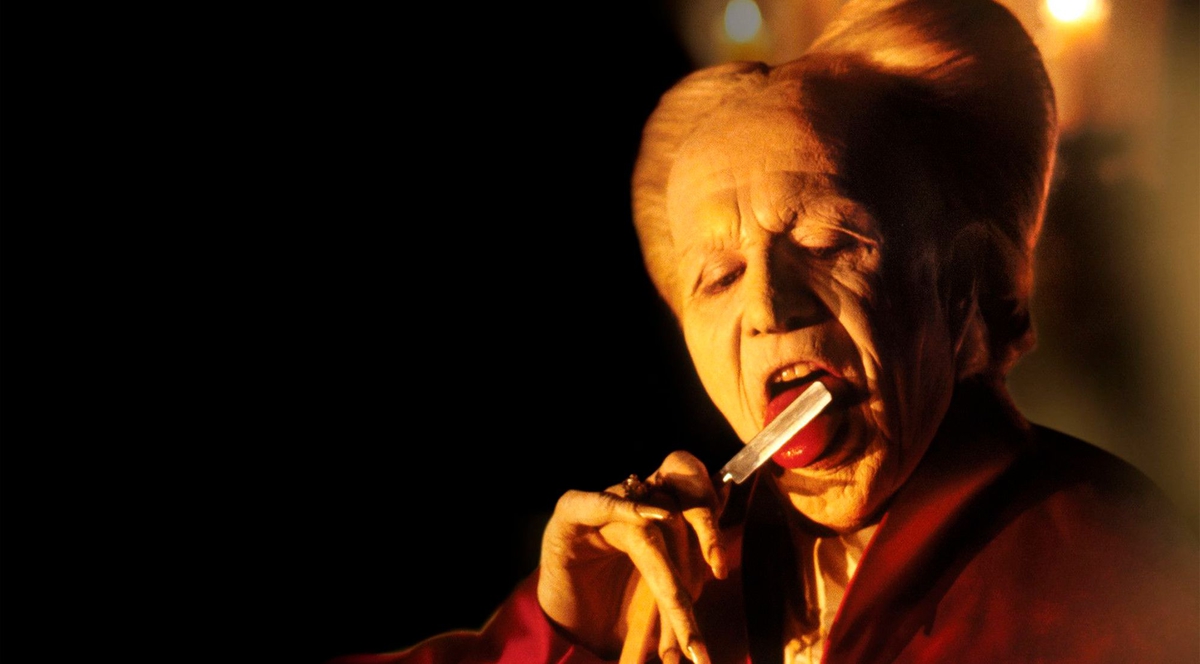 Coughing up blood had become cool! “Tuberculosis dissolved the gross body, etherealized the personality, expanded consciousness”, says Susan Sontag in her essay Illness and its Metaphors, talking of the melancholy of the romantics as a human weakness. The novelist George Sand, in her chameleonic extremism, said of her friend, “Chopin coughs with infinite grace”.

It all began in the so-called “Year Without a Summer” of 1816 in Switzerland, when the freezing air was charged with grey and melancholy, and fantasy literature took off in a meeting of friends in the Villa Diodati mansion, including Lord Byron, Mary Shelley and John Polidori, when they decided to each write a horror story. Mary Shelley came up with hers in just under a year with Frankenstein and Polidori with The Vampire, in which he exposes a monstrous doppelganger of Lord Byron to which he did not need to attribute any implausible eccentricity.

But it was Bram Stoker’s Dracula in 1897 that would constitute the standard of the canon, the “bible” of vampirism that would give the vampire, personified in Count Dracula, his telepathic power and personal attractiveness despite his sociopathic tendencies, alpha male bestial tastes, his wardrobe full of black and mothballs, his sickly emaciation and his mortal fear of crosses, holy water and strings of garlic, which would seem to turn vampires more into a high risk group than powerful villains. Stoker spent seven years documenting the novel from popular stories, crossing the Carpathians and pacing the floor of the British Library which conserves a register of the books he consulted, in which he left the odd dog ear. Despite all his efforts, the novel did not attract much enthusiasm at the time, and it was not until the interest legal battle for rights between Stoker’s widow and Murnau who wanted to make his film Nosferatu, that the book finally began to sell. 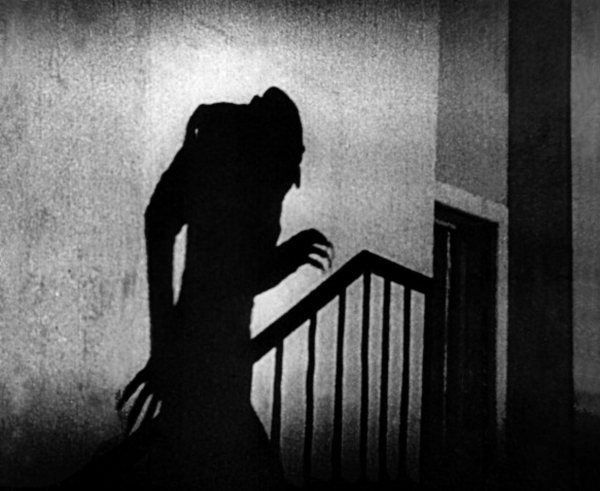 With no sign of romanticism Nosferatu (12 January) shows the repulsive count who nobody would get any closer to than the length of a pole. He is an impersonal being, with feelings that rarely go beyond his lascivious outbursts, ingeniously identified by Murnau as a shadow. Curiously, Nosferatu would lead to another movie, apart from the version by Werner Herzog, which speculated that Max Schreck, the actor who played Nosferatu, was a vampire in real life.  Entitled Shadow of the Vampire, it was directed by E. Elias Merhige and confirmed that the archaic myth was still very much alive. At this point we should remember that one of the first of the “Making of” films comes from this tradition and was none other than Cuadecuc, Vampir (1970), by Pere Portabella, with music and sound by Carles Santos, in a kind of voyeuristic documentary on Christopher Lee, using behind-the-scenes footage from Jess Franco’s Count Dracula.

The movie figure of the vampire has an irrepressible tendency toward parody, that has been used by everyone from the Muppets to Chiquito de la Calzada.

If anyone fitted the body of Count Dracula, now much more carnal, swaggering and bad, in the heteropatriarchal context that would be the wet dream of many a macho man who fancied themselves, it would be Lee who inherited the elegance of Tod Browning’s Dracula, played by Lugosi and the chutzpah of his popped collar. But we have to recognise that the movie figure of the vampire has an irrepressible tendency toward parody, and not just for fancy-dress parades, that has been used by everyone from the Muppets to Chiquito de la Calzada. You only need to think of the great Spanish-language version directed by George Melford in parallel to Browning’s. He used the same sets and props as the daytime version, with Carlos Villarías and Lupita Tovar as the main actors, before dubbing was invented. 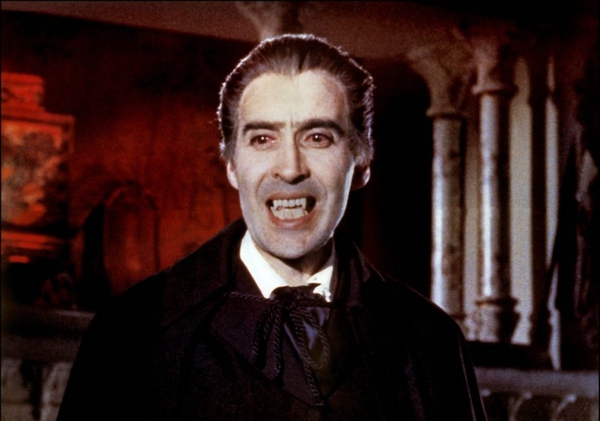 But it was Lee, with the invaluable help of Technicolor and some of the most phallic fangs imaginable, who managed to bring to all his versions and sagas the terribly kitsch aesthetic that has gained mileage with cult audiences over the years, despite the fact that the first of his Dracula films directed by Terence Fisher (19 January), scripted by Jimmy Sangster, was also noteworthy. Christopher Lee ended up playing movies like The Legend of the 7 Golden Vampires  with its creepy Buddha statuettes, in feverish coherence with Stoker’s canon. This stale and decadent aura was the one that weighed down on Coppola’s Dracula (26 January) despite the intention to create an erotic perfection in the forms, colours and shadows which, despite their narrative shortfalls, certainly produce a considerable hike in endorphins. This drift towards a metrosexual and foppish vampire would find its path in Interview with a Vampire and end up as an insipid teen idol in the Twilight saga. 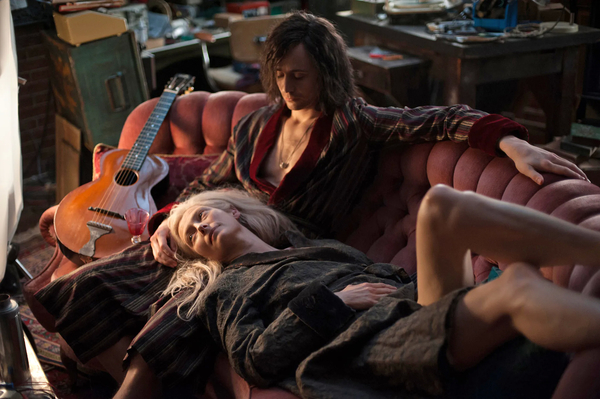 But if, as we have said, the vampire is a universal myth, what is interesting in our incredulous time in which “if nothing is true then anything goes”, it is no longer his origin but the way in which as a character he engages with us today. The current affirmation of the subjectivity of individuals in liberty as “enjoy your symptom”, implies a domestication of the shadow of the unconscious and a ‘turn’ with respect to our view of the vampire, who is no longer a monster to be defeated but a subject to be understood. In the two last films in this programme, you can see how the exaltation of Foucauldian difference turns the unadapted into a cute eccentric, a misfit of extravagant habits and an irremediable fool, whose just deserts in these crazy times is social inclusion above their own repressive adaptation.

In Jarmusch’s Only Lovers Left Alive (2 February), we see some adorable vampires in an atmosphere of exquisite aesthetic sensitivity living their lives in anguish and melancholy in the best Heideggerian style, alongside inauthentic and irresponsible humans who do not know how to look after themselves or their environment. On the other hand, Thomas Alfredson in Let Me In (10 February), offers an extremely delicate mix of the experience of adolescent discovery by a victim of bullying and the monstrosity of the vampire instinct, embodied in the innocence of a girl who must be let in, in accordance with the canon, and therefore accepted, and where the red heat of blood sinks into the Nordic snow.

So far from appearing to be dead, the vampire myth is continually generating re-readings and hours of visual entertainment. A good example is the New Zealand mockumentary What We Do in the Shadows, (2014) by Taika Waititi. This outrageous production was received to great acclaim by the cult audiences and catapulted Waititi to make Thor: Ragnarok, based on the Marvel hero. The film takes up the vampire canon again in a shared flat, in a quest for the normalisation of weirdos, and is currently being shown as an American series. I think the vampire, as a constant figure in the movies, at least deserves a glittering star in the Walk of Fame.

Fear and Pleasure, Vampire Movies, coordinated by film critic Toni Vall, will be on at CaixaForum Barcelona, from 12 January to 10 February.