Each time we find ourselves in front of a work by Joan Josep Tharrats (Girona, 1918 – Barcelona, 2001) we realise how transcendent and significant his professional career was, and how it was not always duly recognised, whether because of the variety of tasks he undertook or because his contemporaries did not appreciate the depth of his discourse.

So, it is a reason for celebration that now on the occasion of the centenary of his birth a series of different events have been organised in his memory, and especially this exhibition which can be visited until 3 March in Masia Can Comas, Pineda de Mar.

It is this town, precisely, that has taken on the organisation of the commemorative programme in recognition of a gesture by Tharrats in 1991 to donate his entire graphic work to the town, a collection which is held by the Tharrats Graphic Art Foundation and which was created especially for that purpose.

To organise an exhibition of all Tharrats’ work would be impossible, not only because of the large quantity of works be created but also because it would not help us to understand the neuralgic points of his pluridimensional production. So, the decision by the curator Ricard Mas not to resort to a classical anthology, but rather a comprehensive exhibit certainly seems to be the right one, in the sense that it is easier to capture the painter’s world in all its diversity. And this has aided the dynamism and clarity of the way in which the exhibition has been mounted.

The decision by Mas to give equal importance to each of the ten sections which make up the exhibition route is also completely satisfactory, given that it brings us closer to Tharrats’ world and also the to the editor, writer, critic, illustrator and graphic artist, ambassador, painter and printer, microsculptor (including gold work), costume designer and finally– Cadaqués, the epicentre of his artistic contacts.

There are ten areas but also 10 essential faces of this multifaceted artist in which we find maculatures, posters, books, magazines, articles and also a small but very representative selection of paintings by Tharrats, from both his most surrealising periods such as when pure abstraction of matter and gesture predominated. So by simply walking through the exhibit and stopping at each of the sections, we can get a complete idea of the figure of Tharrats as an artist, a promotor of initiatives, a writer, an art historian who was always generous with his colleagues, a man with a passion for poetry (opened up to him by his father), classical music and the jazz which convulsed his generation, but also ballet.

We can also confirm or discover that Tharrats is Dau al Set and negre+ and an infinite number of publications and writings that offer us a door into the world in which he lived, his broad knowledge and his friends, during a period of great effervescence, despite living in a sad country which was still immersed in the aftermath of the Civil War and full of social tensions.

However, there are two points in the exhibition which particularly stand out. One is dominated by the Boston Minerva printing machine used to print out his father’s poetry and which he used for all his publications. Of these publications those which appear in the Dau al Set magazine collection are the protagonists of the second point. Not just for blown-up covers which immediately attract the eye of the visitor, but also for the large number of book jackets and posters presented and the way he assimilates American advertising language when here the European trends still predominated. 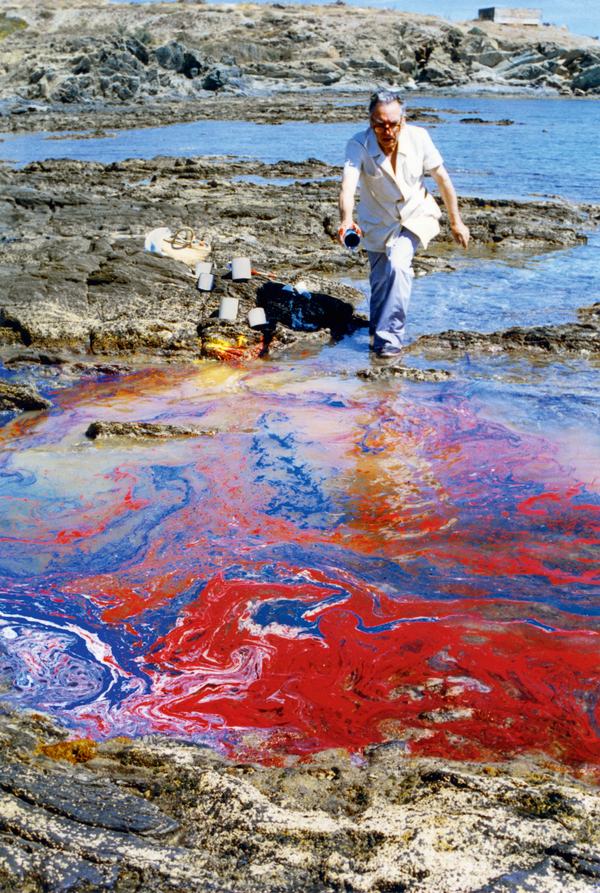 I cannot conclude this commentary without remembering the one of the images of the film Tharrats made by Jordi Cadena in 1979, where the artist appears tipping paint and some of this works into the sea at Cadaqués in an action which, using the most informal of languages, generated true Tharrats. This is the image which opens and closes the exhibition, and also provides the cover for the well-documented catalogue that accompanies this show, in which ten specialists invite us to get a closer view of each of the different sides that make up Tharrats.

The exhibition Univers Tharrats can be seen at the Tharrats Graphic Art Foundation in Pineda de Mar until 3 March 2019.