Uri Geller came into my life on three occasions. The first was on the night of 6 September 1975, when he appeared on the Spanish National TV programme Directísimo, presented by José María Íñigo.

Who doesn’t remember how the Israeli magician invited us to bend spoons and stop watches using the powers of the mind? He managed it easily enough, but in my house we followed the instructions to the letter and not a single spoon was bent. Neither did we manage to stop the alarm clock on the bedside table.

Forty years later, while I was researching my book Dalí and Barcelona, I came across a fragment of the memoirs of Amanda Lear, the famous transsexual who has never admitted to being transsexual. In Amanda’s Dalí we are told how the painter and the illusionist had coincide at the Ritz in Barcelona: “Dalí didn’t believe in any of that, but he received Geller, who bent metal objects in from of him. His penetrating and hypnotising gaze made Dalí uneasy, and he didn’t want to turn it into the object of a parapsychological experience. ‘That patatuski is fearful – he confessed to me. His gaze terrifies me”.

In fact, in La Vanguardia on 10 September 1975 you can read the announcement for the following day, in El Corte Inglés in Plaça Catalunya, at an event of  “the most extraordinary para-scientific phenomenon of all time” Uri Geller was signing copies of his book My Story.

On discovering that clue I looked up Uri Geller on internet and I came across his own website https://www.urigeller.com/. I went to the contact section and sent him a message. Just a few seconds later I received a reply: “call me tomorrow on this number…”.

“Please, please, teach me this!”

The next day I called and Uri Geller replied in person. He was living in London at that time. He told me that in his suite at the Ritz Dalí had tried to bend the spoon but he didn’t manage it, and he begged him: “Please, please, teach me this!”.

Don’t forget that Dalí had painted the first bent spoon in the history of art in 1932, in the oil painting Symbole agnostique. 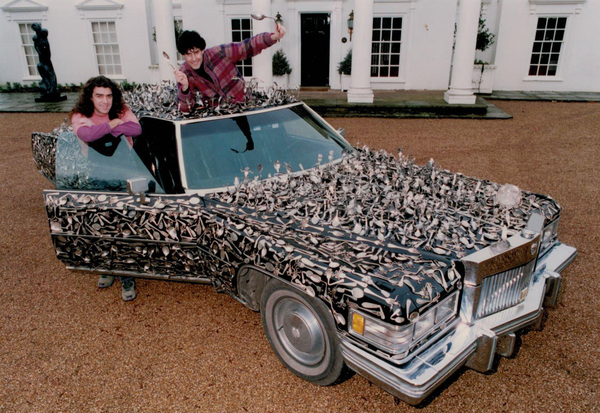 Uri Geller and his Cadillac.

Geller told Dalí that he also painted and had done so since he was a child. “Later – he confessed – my work evolved, strongly influenced by the work of Dalí”.

“In New York we met many times”, he continued. “On one occasion, Dalí was locked in a bathroom at the St. Regis hotel where he drew the outline of a horse, and I drew an identical outline from the outside. He made me a gift of a crystal ball, which I have made the hood ornament of by Cadillac, covered in three thousand bent spoons. He told me that the ball had belonged to Leonardo da Vinci”.

But there was a final surprise. Geller told me that his second surname is Freud. He is a descendent of a cousin of the founder of psychoanalysis. Ur Geller Freud! If Dalí had known that…!

Two years later, Uri Geller contacted me again. A work by Leonardo da Vinci,  Salvator Mundi, had just been auctioned for 450 million dollars – the highest price ever paid for a work of art. Geller told me that the crystal ball on which Jesus sits in the painting is the very same one that Dalí had given him.

When it came to saying goodbye, Uri Geller asked me a strange question: Are you happy, Richard?”

“Yes”, I lied. If spoons can bend and clocks can stop purely by mindpower, why can’t I be happy, as well?