Great stories deserve to be told and this one can be told in ten waves.

Waves which pass through the femoral artery that carries blood and oxygen to the lower limbs of the human body. 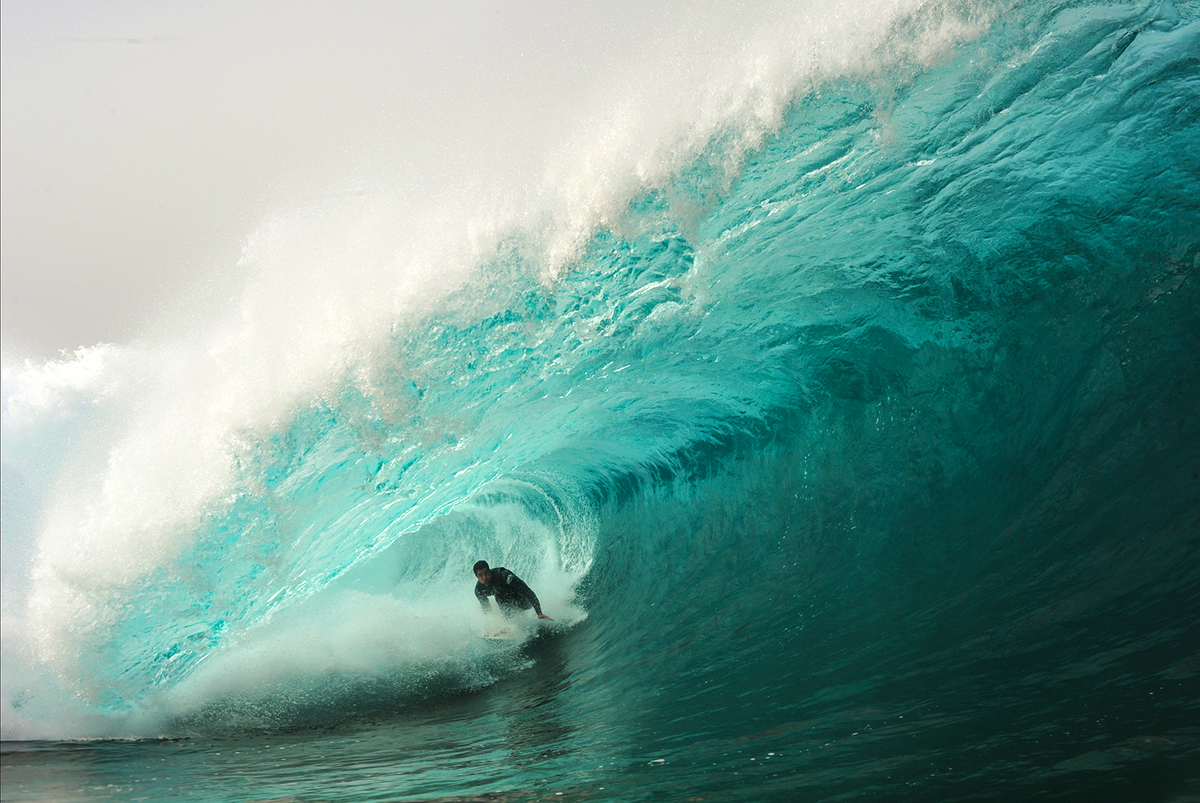 Guillermo Cervera, who is a photographer of things, has been talking to me about the femoral artery for ten years. It is the one that has come up in our conversations and in particular while sailing between the islands of Macaronesia.

First wave. At the beginning of 2011, having covered the start of the war in Libya together, I returned to Barcelona, and Guillermo managed to reach Misrata by sea with a group of photographers – the city being under the siege of Gaddafi.

Guillermo found himself there with Tim Hetherington, Chris Hondros and some other photographers from the English-speaking world. They went to the centre of Misrata, where the fighting took place metre by metre. Guillermo disappeared for a moment to take a piss and when he returned the others had gone. They had left him alone. He was fucked, but he managed to get out of there. Once back in the house where they all slept only one of the photographers from the group, M., apologised. 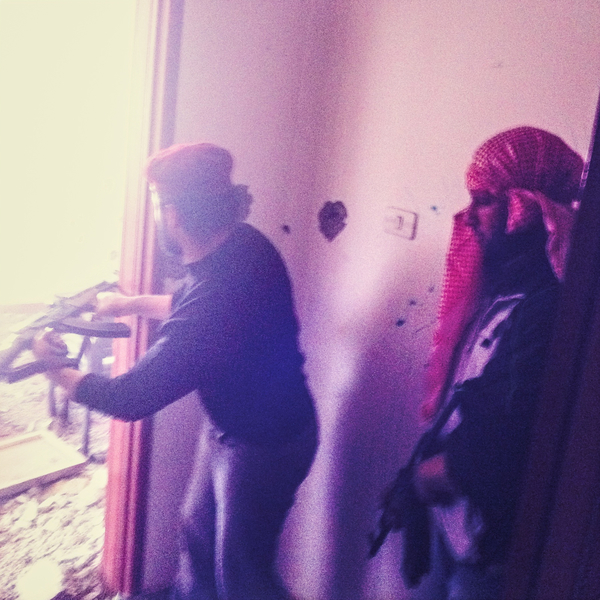 Second wave. In the afternoon they returned to the front and there they found a Brazilian photographer. it was an absolute classic: the Brazilian was the first to arrive in Misrata and he resented the arrival of the other photographers. “Out of the way you idiot!” he said and headbutted Guillermo. Guillermo did not hold back. It was a sensational scene: two western photographers in a fist fight in the midst of a battle, and the rebels, looking like they were seeing a UFO, stopped firing in their quest to take a building. The rebel leader, wearing a turban and with a Kalashnikov slung over his shoulder, tried to separate the photographers, who were fighting with their cameras also slung round their necks.

“Tim, Chris and the others watched our fight. Nobody took photos of it. And it was the best photo opportunity ever!”.

The rebel leader – he had already clocked him – pointed the Kalashnikov at the Brazilian, the photographers separated and the war – the other one – continued. The rebels took the building and killed the Gaddafi loyalists inside it. On the roof the rebels took selfies with the dead bodies. 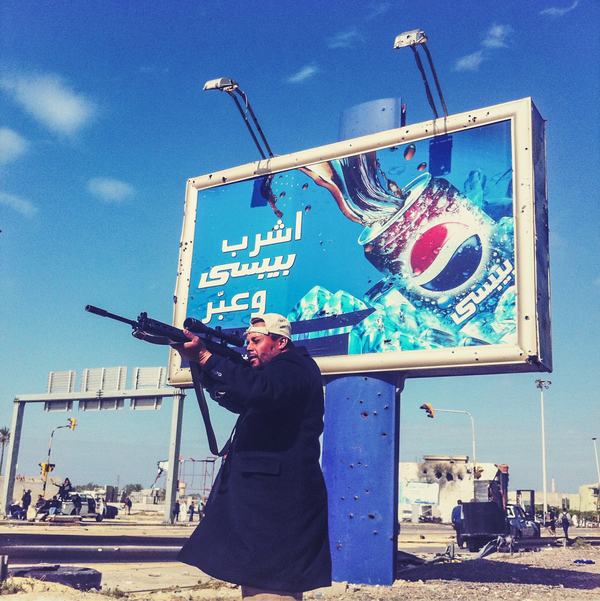 Third wave. The next day they retreated to the urban front. There was a relative calm but still there was something strange in the air. They met three French journalists and together they decided to leave the place. But before they did they went up to the roof where the bodies were. Guillermo stopped to photograph an armed rebel underneath a large Pepsi poster. The group carried on without him. Just seconds after he had shot the Pepsi photo, its bubbles dissolving into the sky…BOOM! A missile struck between the façade and the floor that the others had reached. Without even thinking about what he might find he took a photo of the smoke from a distance. Those who were able to ran from the strike and Guillermo ran after them. 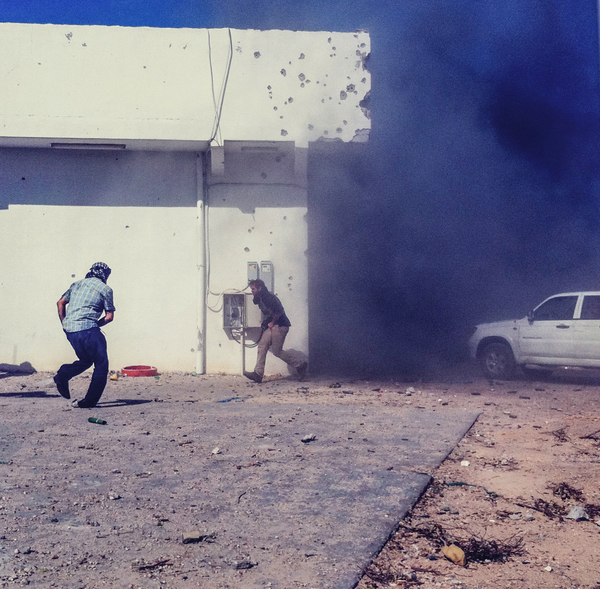 “When I arrived I found M. and K., another photographer in hysterics. While a Libyan managed to escape in his car, I opened up the boot and they both jumped in and fled. I went towards the site of the strike and through the smoke I could make out Tim on the floor, half propped up on one arm. ‘Guillermo, please, help me’, he begged. At his feet was Chris, face down. Blood was trickling out of his helmet.” The rebels looked after their own. There were five or six Libyans either dead or injured.

All the journos and photographers had fled.

All the journos and photographers had fled. All that was left were the injured bodies of Tim and Chris.

The scene was a great photo. The great photo that Guillermo did not take. His photography was to help them.

“A rebel with a pick-up who was helping his own approached me. ‘Please, please, help me!’, I yelled. Several others came over and together we put Tim and Chris into the vehicle. Tim was still conscious. I thought Chris was dead”, (in fact he was alive but he died later).

Guillermo didn’t know it at the time but the two photographers suffering at his feet had taken the photos that had most impressed him years earlier when he had bought a book of war photographs.

The pick-up sped on to the hospital. Guillermo took Tim’s hand. On leaving the area they saw an ambulance and made towards it. The ambulance took Chris away.

Fourth wave. Before the pick-up set off again Guillermo grabbed his mobile out of his pocket and took a photo of Tim, injured. Just the one. “It was all I could do”.

Fifth wave. Racing towards the hospital Tim went in and out of consciousness. “I saw blood coming from his groin but I didn’t look good; the whole floor was covered in blood and guts, sliding around, and the pick-up was bouncing up and down”.

Guillermo didn’t let go of his hand. “Tim, don’t worry, we’re almost at the hospital”, he said in an effort to stop him losing consciousness. But Tim’s eyes started closing and in the end Guillermo noticed something difficult to describe. “One of the rebels travelling on the roof of the pick-up put his hand on my shoulder, as if to say ‘I’m sorry, he’s dead’”. 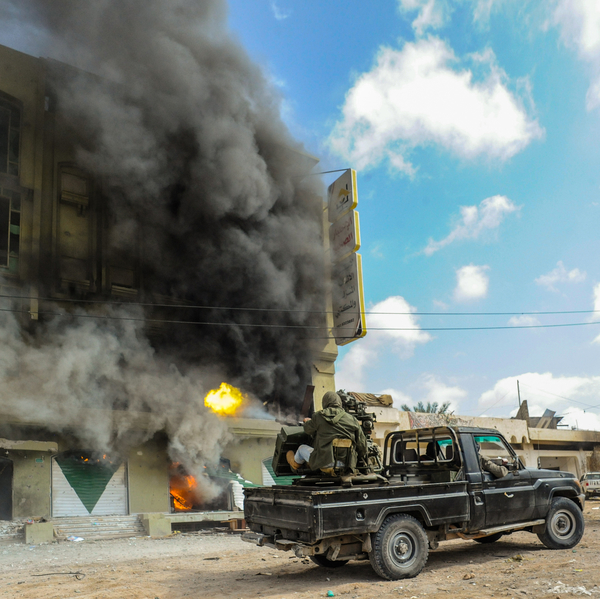 Sixth wave. In the hospital they took Tim’s body away – his camera still round his neck. Guillermo went up to M., who was only slightly injured. “Don’t take photos of me”, he said to Guillermo, who had no intention of doing so and simply wanted to know how he was. Weeks earlier I had seen this injured photographer, who now did not want to be photographed, shooting the torn off face of one of Gaddafi’s gunned down pilots with great aesthetic sensitivity.

A Reuters cameraman asked him for a short interview and Guillermo conceded. The interview went viral. Shortly afterwards he got rid of a BBC journalist. He did want a scene.

“My shoes were soaked in blood. In the hospital corridors everyone looked at my feet. It freaked me out”. 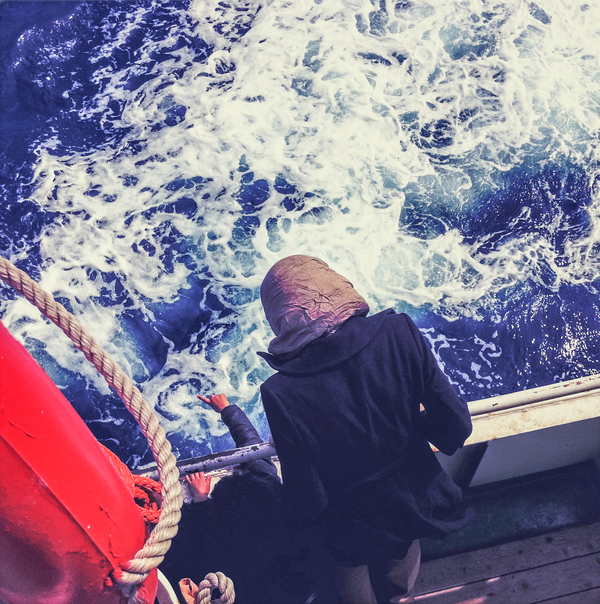 The next day he left Misrata in a Libyan fishing boat full of refugees heading for Malta. “Can you open your bag?”, K asked him before he left. “Why?”, he asked. “They haven’t found Tim’s camera”, she said. “See for yourself”, Guillermo told her handing her the bag… “Ok, are you happy now?”.

In the middle of the Mediterranean a US destroyer forced the fishing boat to turn back and they went to Bengasi.

Seventh wave. Now in Lanzarote Guillermo set out to do a spot of windsurfing with an emergency doctor friend. He told him about Tim’s femoral artery and asked if he could have done anything. “You’re not a cardiovascular surgeon, right? And even if you were you couldn’t have saved him there”, he replied.

Eighth wave. A funeral in the bonfire of New York vanities, already murmuring that he – the only one who hadn’t given up on them – carried on taking photos rather than helping out. 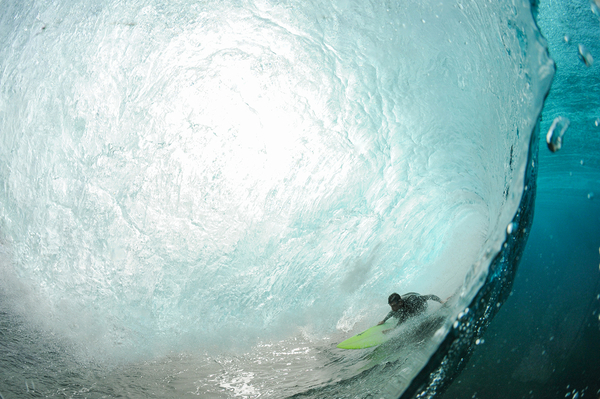 “They did invite me, but I was already OK with my waves. I didn’t fancy the circus of photographers that would be there”. The recommendation of American photographer MK. illustrated the magnitude of the tragedy: “You should go to Tim’s funeral. You’ll make a ton of contacts”.

Sebastian Junger, author of the best seller The Perfect Storm and the documentary film Restrepo contacted Guillermo. He had been a close friend of Tim’s. He asked him to go to the funeral, saying that his mother wanted to talk to him. “I thought of my own mother, who had died eight months earlier, and I went”.

The funeral took place in the great Presbyterian church on Fifth Avenue. Guillermo found himself seated next to K. – the one who had forced him to show her his bag.

“It’s not easy to explain to a mother how her son died. She asked me whether Tim had spoken of her. Whether he had suffered. I told her that he gradually fell asleep. She thanked me for taking her son’s hand as he was dying”.

The great social event of the funeral was the exhibition of Tim’s photographs in a Chelsea gallery. “That was the funeral of the ‘contacts’. I went, saw the panorama and left”.

Obsessed with the idea that Guillermo could have stopped Tim’s haemorrhage, Sebastian set up a first aid school for reporters in the Bronx (RISC, Reporters Instructed in Saving Colleagues). “With bombs in speakers, extras in burkas and that kind of thing. It hurt me. I never understood that”.

Sebastian had planned to make a documentary with Tim: The Last Patrol: walking with two combat veterans from Iraq and Afghanistan over almost 500 kilometres of deepest America. Sleeping rough. And he offered it to Guillermo in place of Tim.

“Oh, my!, I thought. But then again it was an opportunity to tell my story. And to take photographs. Over the long route I told them what had happened in Misrata and about the femoral artery. We left it there”.

Ninth wave. Guillermo kept the image of the injured Tim for himself. Some years later we published it, the size of a postage stamp, in a book that we made together, War is a swimming pool. And we exhibited it large-scale in a major New York gallery, the culminating work in a room full of surf pictures.

The gallery manager remembers Tim’s friends expressing “immense respect” for having exhibited that image. All of them, except for this one, were surf pictures but “they felt that it was more than a surf exhibition”.

Final wave. Today, Tuesday 20th April 2021, it has been ten years since a missile destroyed the femoral artery of Tim Hetherington.

It is the photograph that nobody took: Guillermo holding his hand as he died.