With rebellion, awareness is born… and so is suspicion

From a quote from The Rebel, an essay by Albert Camus, written in 1951 in which “from rebellion awareness is born”, the Mayoral Gallery is exhibiting some of the most jarring and representative works to have been labelled under Spanish Informalism.

In the Mayoral it would be normal to wander around the disaster zones of Manuel Millares where the surface has been especially tortured and spoiled, inundated by dripping black and deep blood red paint (Quadre 72, 1959). It is a place to tremble before the reduction of female figures in the chaos of dark automatism (Antonio Saura, Ángela, 1959) and feel both enclosure and the need for meditation (Antoni Tàpies, Forats i claus sobre blanc, 1968) or to come up against the thanatotic in the transcription of coagulant, physical and spiritual matter (Luis Feito, No. 260, 1961).

In fact, every one of these pieces in the exhibition is held up as a paradigmatic example of the progress of Spanish painting in investigating matter, capable of converting the canvas into a multidimensional battlefield. Of course, to remain only with the successes and qualities of these works would be to remain precisely on the surface, and somewhat redundant. So, inspired in the title of the exhibit, we can dissect the homunculus and slip through the cracks in the walls.

Implicitly, two diagnoses can be made from this exhibition: one in terms of the profiles of collectionism, and the other in the possible rebel consequences of the language of pictorial abstraction as rebellion. 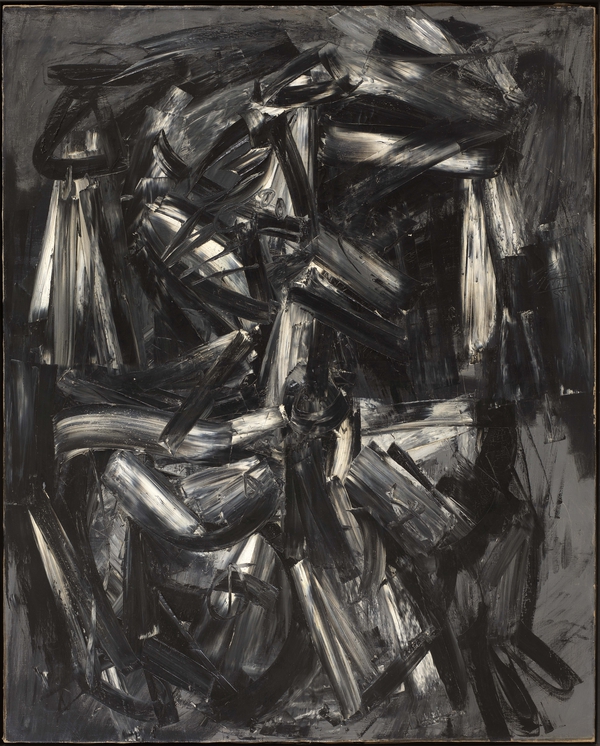 In the main text of the catalogue, Itineraries of the Spanish avant-garde at the midpointof Francoism, curator Tomàs Llorens insists on these qualities of Spanish abstraction in the post-war period that we have mentioned, and talks of a series of important international prizes and events: the prizes awarded to Oteiza and Cuixart at the Sao Paolo Art Biennial in 1957 and 1959 respectively, and the organisation of two exhibitions in New York in 1960, presented as “the culmination of this series of international successes for Spanish avant-garde painting”, the exhibition Before Picasso; After Miróorganised by the Guggenheim and New Spanish Painting and Sculpture, curated by Frank O’Hara at the MoMA. Both of these exhibits included worked by Millares, Saura, Tàpies, Canogar, among others. In fact, the Mayoral Gallery includes a vitrine with documents relating to these exhibitions and insists in the catalogue on their exemplary nature, even including the appearance of a painting by Feito in one of Visconti’s movies.

However, my question is, what is not being told to the collector which we in barcelona know very well? First, that these series of exhibitions between Spain and the United States balance on a tightrope which goes well beyond heroic tales. On the one hand, remember the American dream of setting itself up as the greatest exponent in the history of contemporary art, having robbed Paris of this position after the Second World War; and how this style was consolidated thanks to huge government investment which involved sending American exhibitions of Abstract Expressionism to other western countries, among other things.

Two examples are the exhibition El arte moderno en los Estados Unidosorganised by the Palau de la Virreina in 1955, and LaNueva Pintura Americana, at the Museum for Contemporary Art of Madrid in 1958. The country which presented itself to the world as a model of freedom and democracy exported artistic tendencies with characteristics similar to those in a country run by fascist army officers. On the other hand, we should not forget that the good relations which were established subsequently between Spain and the United States revolved precisely around anti-communist alliances in the context of the Cold War, without too much heed as to whether these countries were democracies or dictatorships.

“Excellency, this is the hall of the revolutionaries”

Similarly, it is difficult to ignore the organisation by the Tàpies Foundation of the exhibition Contra Tàpies, curated by Valentín Roma and extended through the foundation’s blog in a series of materials rescued and critically set out by Jorge Luis Marzo. Each and every one of these materials, among which is an interview with Luis González Robles, Foreign Minister under Franco, highlight the slippery relationship of Spanish matter painting and the dictatorship, for many reasons.

First of all, there was the suspicion involved in allowing the art to be promoted internationally by the Franco regime, relying on the reception abroad being capable of understanding the “rebel” nature of the pieces. Secondly, despite the specificity of Spanish matter painting which weaves a more than stimulating tale from the Golden Age to Goya, via the Valle-Inclán’s esperpento, these pieces were also read as components of a rank, folkloric Spanish nationalism, both at home and abroad. And finally, because both figures such as González Robles and the artists themselves rather than considering the work rebellious, explicitly saw it as inoffensive. In an extract from his Memòria personal published by Seix Barral, Tàpies himself wrote: “I have a photograph in which Franco, surrounded by a group of important people, is standing in front of one of my paintings in one of the Hispanic Biennials. At one side of the group is Llorens Artigas, half hidden, covering his face to avoid the photographers. They are all laughing. According to Artigas, somebody (I think it was Alberto del Castillo) said to Franco: ‘Excellency, this is the hall of the revolutionaries.’ And it seems that the dictator said ‘While their revolutions are like that…'”

This brings us to the second diagnosis in terms of the rebel potential of abstract painting. In the Mayoral catalogue there is also a text by Bea Espejo asking, “what does it mean to be a rebel?”. Starting out once again from Camus, the answer assumes that the rebel is he “who turns against something”. The question here is, what exactly is the Spanish matter painting turning against? If the answer is against forms, in an attack on the previous and contemporary artistic tradition defended by the regime, the rebel nature of these works is unquestionable. But if we suggest a single rebellion exclusively against the Franco regime, the answers are not so clear, although no less thought-provoking.

The works are not just their intentions, but also luckily their uses. And in that sense, the exhibition at the Mayoral Gallery encourages us to open up to the possibility if multiple cracks: does the collector always need a story of heroic simplifications? If we position ourselves as rebels, can be stimulate the awareness of collectors through other curatorial narratives? Are the components of the apparent rebellion of language always of a meta-artistic character? Does abstract painting lend itself especially to tendentious manipulation? Is that a problem? After exhibitions such as Contra Tàpiesor documentaries such as Katallani, what is the sense of ignoring the problematic, and often banal and regrettable uses of these works?

We need to open our eyes and insist on the possibility that in presentations of Spanish Informalism, all the cracks are multiplied and emphasised, the gaps can be explored, and we can stand in front of the coagulation without falling into reading of triumphant reductionism.

The exhibition With Rebellion, Awareness is Born, can be seen at the Mayoral Gallery in Barcelona until 5 January 2019.