Last Thursday in Barcelona there was an extraordinary auction of antiquarian books and manuscripts. The organisers Soler y Llach, are a reference in this kind of sale.

Most of the lots were sold. You can see the results here, and they throw up two very interesting facts.  On the one hand it is clear that the bibliophile market has become firmly consolidated following years of slow recovery. There are books and documents on the market that are so much a part of our history that they cannot be ignored. Our cultural heritage is not just in the hands of the governmental agencies, which did not attend this auction. 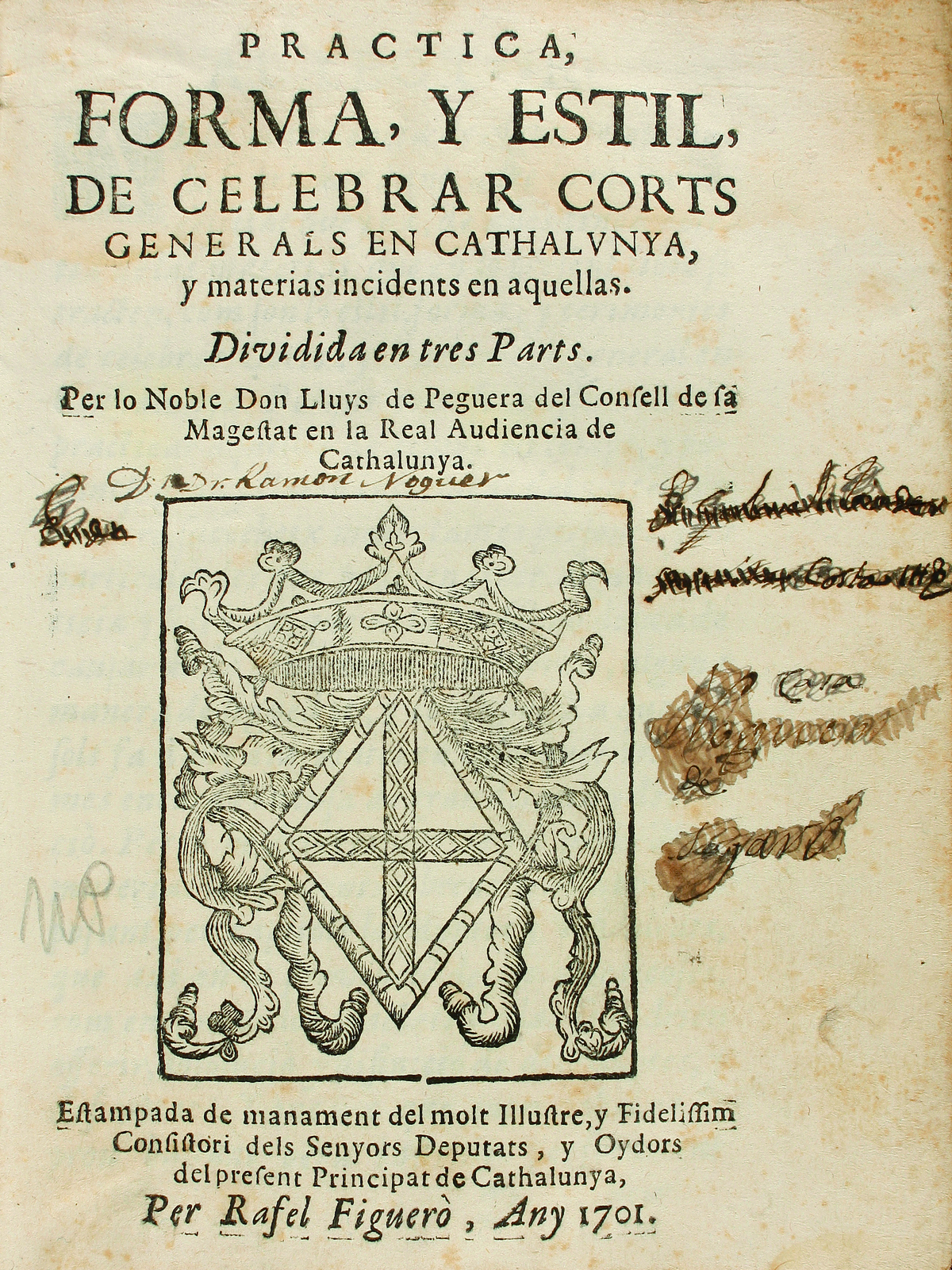 On the other hand, and in line with a series of cultural tendencies related to national identity, there was an enormous interest for everything to do with the most specific episodes and aspects of the history of Catalonia: documents and books about the War of the Spanish Succession, medieval Catalonia and the laws related to Catalonia and the Kingdom of Aragon.

By way of example, there was a section dedicated to the War of the Spanish Succession, with 43 lots of books, bans, leaflets and manuscripts. Not only were almost all of the lots sold, but many either doubled or tripled the starting price.

Perhaps the prices started too low, but the fact is that, for example, a set of 35 strophes and poetic leaflets dedicated to King Charles III, some of which were in Catalan, reached almost twenty times the original asking price: from 120 Euros they were sold for 2,200.

A mysterious anonymous manuscript, written around 1830, about the history of Barcelona from Chief Councillor to Philip II, Joan Fiveller, which was up for 100 Euros, sold for 4,000.

Other beautiful items from Barcelona bibliophilia were Rafael Tasis: Tot l’any. Dotze estampes barcelonines i un pròleg, 1943 – a print run of 55 copies on filter paper; lithographs by Antoni Clavé; and an extraordinary leather-bound item by the mythical Emili Brugalla, finally sold for 3,200 Euros from a starting price of just 350. 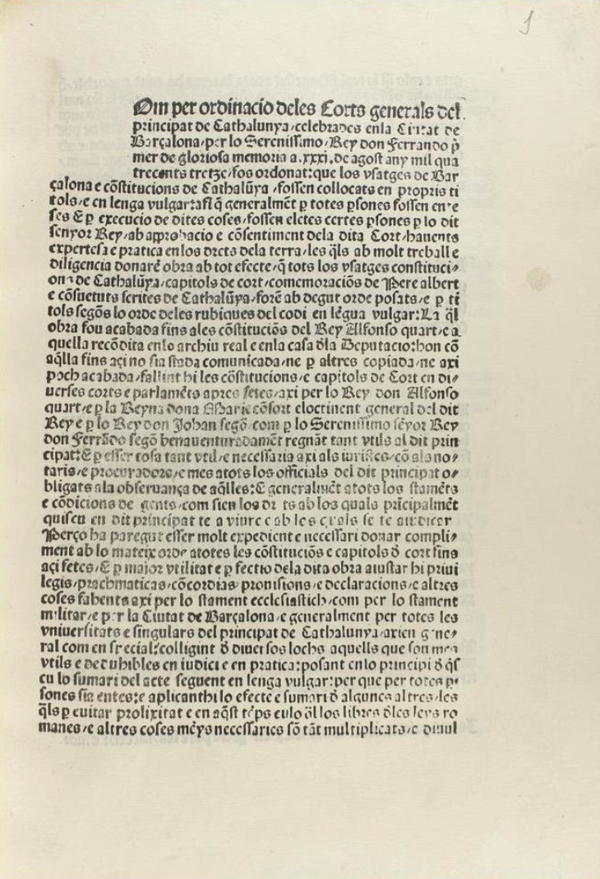 But the high point of the auction was the section of Gothic and incunabular books from the Ausiàs March Library – a false name for an owner who wished to remain anonymous.

The lots relating to medieval legislation in Catalonia and the Spanish state sold for unprecedented amounts: some of the Usatges de Barcelona e Constitucions de Cathalunya printed in 1495, and probably some of the first to see the light of the printing press, reached a total of 10,000 Euros (divided into lots of 4,500). Successful bids for the Suma de los Fueros de Aragón y observancias del noble e ínclito Reyno de Aragón (1525) by Jacobo Soler, rose from 700 to 8,000 Euros. A Consolat de Mar published in 1518 went from  1,800 to 5,500 Euros, and the classic from Catalan literature, the Crònica dels fets… del Inclyt Rey Don Jaume Primer Rey d’Aragó, de Mallorques e de Valencia: Compte de Barcelona e de Muntpesller (1562) was sold for 3,000 Euros from a starting price of just 1,200. 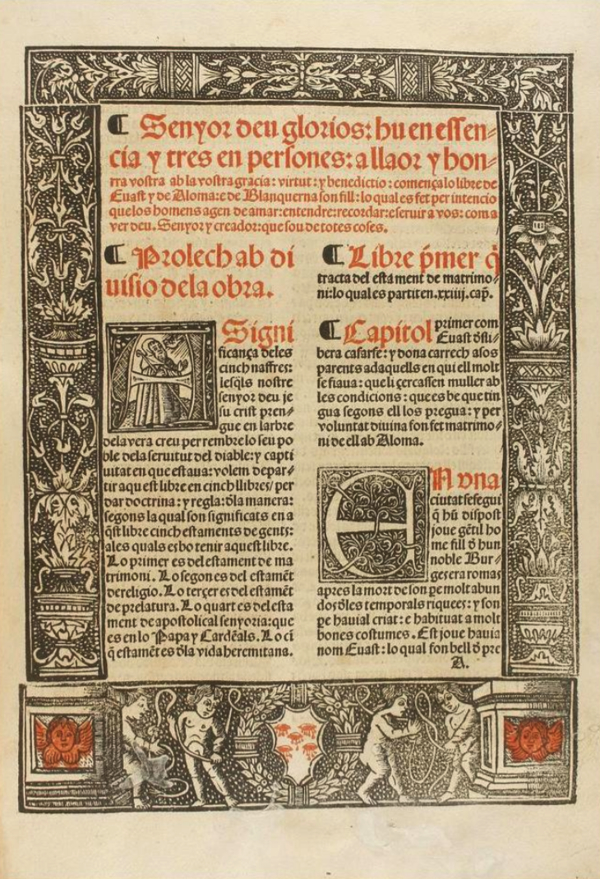 The highest sales were for the classic Libro primero de Morgante y Roldán y Reynaldos donde se cuentan sus maravillosos hechos en armes (1550). This story, which was quoted by Cervantes in the first chapter of Quixote, was on sale from 4,000 Euros but the hammer finally went down at 12,000! And the adaptation of Ramon Llull’s Blanquerna by Ramon Joan Bonllabi – a rare classic with Gothic typography and wood print, was originally set at 6,000 Euros but finally sold for 19,000.

Conclusion: there is certainly a market here, opportunities and many future possibilities for the sale of good quality bibliographic material, and that market is a good indicator of the current interest in our own history.