Dalí, Miró and the war of men’s ties

In December 1947, Joan Miró, who had just returned from his first trip to the United States, declared to the journalist Manuel del Arco: Dalí is “a man who paints ties.”

He was probably referring to the tie designs that Dalí had made for Pilgrim and Mc. Currach. The blood, however, will reach the river, and even the clandestine magazine Temps will take advantage of Dalí’s return, months later, to dedicate its cover to the “tie dispute.” 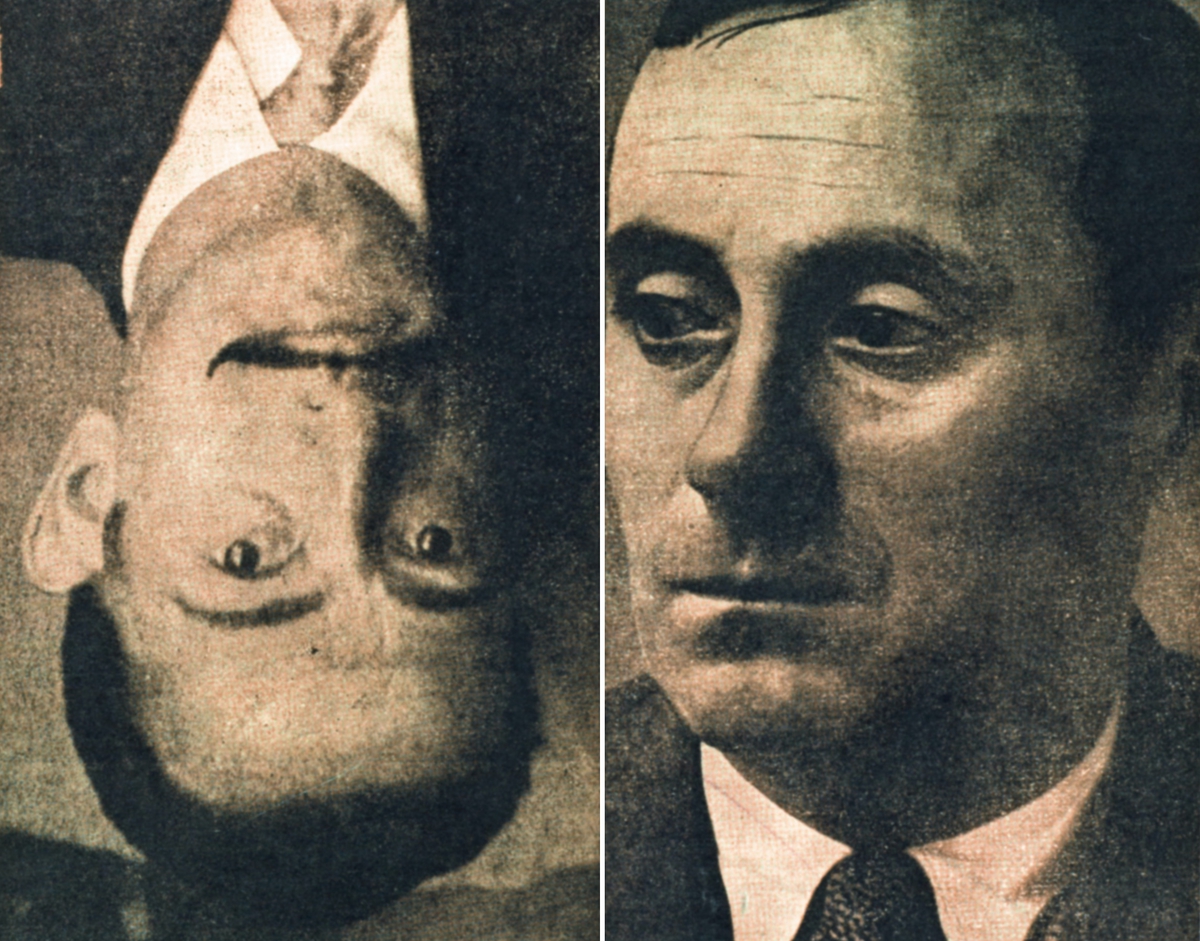 Dalí and Miró. Images taken from the cover of the clandestine magazine Temps, 1948.

In October 1948, the editorial of the first and only issue of Temps poked in the wound: «Salvador Dalí, who has visited us more recently, found out about the issue, and was quickly to state that the serious thing was not being a tie painter but having the misfortune that the pictures that a man painted resembled ties, which was what happened to Joan Miró.»

In January 1951, interviewed again by Del Arco, Miró did not miss the opportunity to disqualify Dalí:

«-Picasso, according to Miró, what is him?

-A great artist who will leave a mark, regardless of the anecdote.

-Dalí, according to Miró, what is him?

-Will the anecdote remain of Dalí?

Dalí will also have his opportunity to respond through Del Arco. And in the summer of 1951 he gave his version of «the war of the ties»: «First reaction: it amused me a lot, because Miró’s art, like all abstract painting, drifts towards a decorative or pseudo-decorative painting. They are the right ones to make ties, or furniture, or wallpapers: they can be stereotyped, they can be reproduced. They are all flat colors, based on juxtapositions of violent colors; but they do not even reach what is a Persian tapestry, full of geometric science. If Miró was referring to the fact that I painted ties, Leonardo da Vinci [actually, Michelangelo] painted suits for the Vatican. »

With so much noise, it is not surprising that many Catalonian artists took sides for one or the other. As the poet Joan Brossa explains, “you have to know that there was a significant division in Dau al Set: Puig, Tharrats and Ponç were admirers of Dalí; Cuixart, Tàpies and I, of Miró ».

In 1958, in the framework of a series dedicated to contemporary painters, Miró went so far as to ask the journalist who was interviewing him if the publication intended to include Dalí. If so, he would decline the interview… 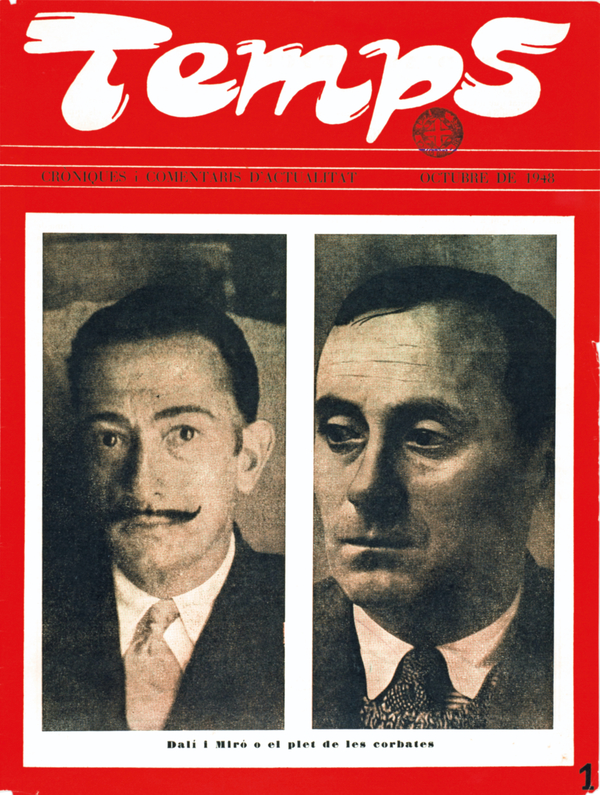 Cover of the only published issue of Temps magazine, 1948.

Almost coinciding with the umpteenth controversy between the two creators, Josep Pla will dedicate an article to them in Destino, where he glosses their contrasting personalities: «Miró is physically a pure peasant, a peasant from the Tarragona countryside; a cute peasant fresh, pink, silent and probably shy. Its most visible characteristic is silence. He never says anything and if he says something to be published it is to act crazy, to impress in a decisive way, which is an almost certain indication of his shyness. Dalí, on the other hand, is a rather ramshackle gypsy, panting and talkative, sensual and nervous, who fails to give the impression of a madman even when he expressly practices some form of madness. They are both primarily riding on propaganda and their only concern is buying low and selling high. Probably both are two delirious misers exclusively concerned about the security of their future and this way of being shows that they are two true artists. » You can see that Pla is from Empordà and feels more sympathy for the one from Figueras…

«Miró doesn’t even paint, he is folklore.»

It seems, however, that the main person interested in the Miró-Dalí struggle continues to be Del Arco, the journalist. And it is that a good controversy never has to be wasted. Even in May 1959, he would ask the one from Figueres:

«–Dalí, are you jealous of Miró, a more important character than you in North America? »

«–I admire him as a racial and integral product of the Tarragona countryside and of the strength that the stubbornness of a peasant can have; and that while it is Spanish, it makes me proud, for being the quintessence of our personality. »

Del Arco, not satisfied enough, pokes into the wound…

«–Does he paint better than you? »

«–Miro doesn’t even paint, he is folklore; how you cannot call those who paint Mallorcan pithos a painter. »

In a radio recording that is kept in the Library of Catalonia, Manuel del Arco, now as the host of the program La vida contrareloj –Radio Barcelona, 1966–, plucks a Miró anecdote from Dalí: «I remember one thing that amused me a lot about Miró. He had explained to me that he wanted to express in one of his canvases what Unamuno called the tragic meaning of life, and because he is very stubborn, he would bang his head on the wall, and the wall was full of blood to reach that intensity. And when he exhibited it, there were a number of American ladies, with very eccentric hats that said, “Oh! What joy! As it is happy, it will be magnificent to put in the children’s room, so that everyone is happy”. So he had done exactly the opposite of what he wanted. That is why you have to be imperially realistic because at this moment, as soon as Velázquez paints Las Meninas, whether it is a tram driver, Manuel del Arco, Dalí … we are all forced to see exactly what Velázquez wanted to tell us. »

Mutual antipathy will never decay. If in 1973, in Comment on devient Dalí, André Parinaud collects Dalí’s lamentations about a Miró who «could have succeeded as a mundane painter, because he wears a tuxedo very well, but has specialized in folklore and that darkens his standing.», Miró in 1975, would not stop saying to Georges Raillard: «Dalí had impressed me. Dalí the man. He was young, he must be eight years younger than me [actually eleven]. I met him in Barcelona and his brilliant, sparkling intelligence impressed me immediately. But at no moment did I have a friendship with him. And now I refuse to see him.

As Joan Miró’s wife Pilar Juncosa explained, in 1982, when Gala died, she and her husband sent a letter of condolences … «and Dalí answered us very kindly. »