It is not easy to gain access to kinetic art from the world of screens and digital media. Accustomed to the paradigm of constant and liquid movement, kinetic art pieces and their commitment to the study of movement have something of an old-fashioned method, a mechanical process and a touch of magic. It is almost as if we are talking of another age.

At La Pedrera they have proved it. The exhibition Open Works. Art in Movement, 1955-1975 has offered Barcelona a broad sample of plastic and sculptoric kinetic art from the twentieth century. Curated by Jordi Ballart and Marianna Gelussi, the exhibition centres on the 1950s and 1960s, and crosses over into minimalism and the aesthetic of pop art. The list is a long one with classics from those years such as Jean Tinguely, Victor Vasarely, Lygia Clark and Carlos Cruz-Diez, who presents a chromatically traversable installation. But there are also contemporary artists such as Mona Hatoum and Ann Veronica Janssens. The international representation is broad, but also present, despite the fact that kinetic art in Catalonia was not such a great trend, are Leandre Cristòfol and Jordi Pericot, and from Spain Eusebio Sempere. 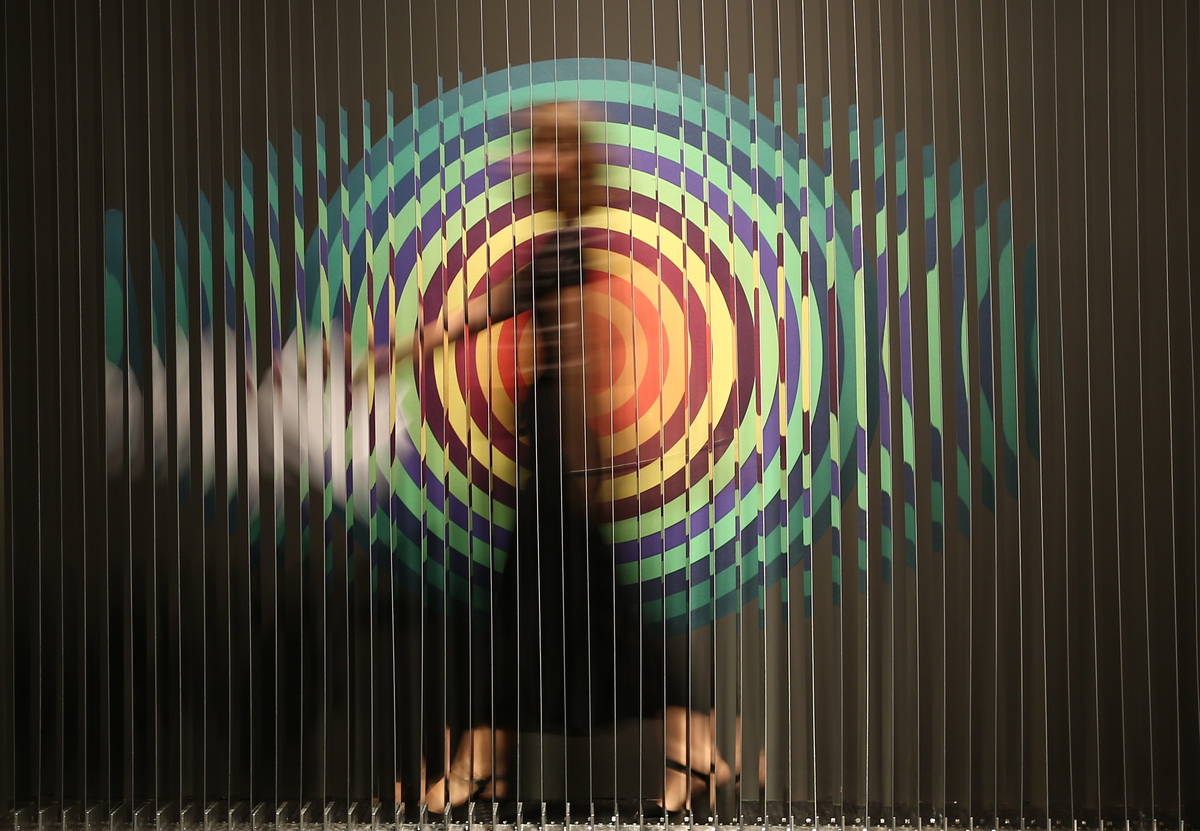 A person passes in front of the work of Julio Le Parc Cloison lames réfléchissantes, 1966.

Of the first group –those who had already wanted to move away from visual quietism in the 1920s and 1930s– there are fewer works, and it would have been good to see more both for the injection of avant-garde innovation that they represented which by the fifties and sixties had disappeared. Let’s take three points to illustrate what we are talking about.

First. Naum Gabo, a scientist by training, write the Realistic Manifesto together with Antoine Pevsner in 1920. It was the first invocation of kinetic art with arguments such as the need to end the visually immobile artistic tradition and its condition as elite art, along with others which are reflected in science: “Look at a ray of sunlight…the most silent of all silent forces, yet it travels at three hundred kilometres a second”.

Second. There was no holding Marcel Duchamp back, and in 1929 he took a series of optical discs and made them spin with the use of a film camera. He alternated them with others on which there were words written in French such as anagrams, alliteration and puns. With his Anaemic Cinema –the projection which opens the exhibition at La Pedrera– a kinetic Dada was born. The idea of the optical disks pursued him and by 1935 it was the viewers themselves who operated them by means of a small motor. These were his first Rotoreliefs, very simple mechanisms in which the eye perceives a depth that the brain knows is not there.

And third. In 1930 Alexander Calder managed to make his pieces move on their own. Beforehand he had reduced the material to its minimum expression: a wire. It was Duchamp who gave the pieces their name: mobiles. And later it was Jean Arp who designated the works by Calder resting on the ground as stabiles.

It is worth returning to their origins to understand these things, If Naum Gabo had the idea, Duchamp’s optical disks and Calder’s mobiles mark the two main lines of the works exhibited in la Pedrera: the works which generate a sense of movement and those which do actually move.  The former gave rise to Op Art which displaced much of the kinetic art. An art which puts the human eye in a position to discern whether a body has moved in space or whether it is all an optical illusion to make the brain understand that in questions of movement and perceptions of movement it does not have the last word. 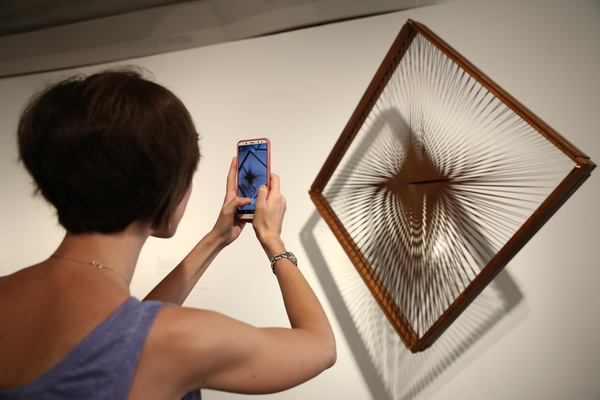 A person photographs the work of Alberto Biasi Dinamica ottica, 1962-1967.

In front of some of the works exhibited in La Pedrera you get the feeling that you are looking at a zoetrope, a magic lantern or one of the first motion picture cameras. Seldom have I seen that slight movement of the onlooking subject: who or what is moving? Enchanted visitors stand in front of the works swaying slightly to the right or the left, or forwards and backwards in a minimal, very minimal movement. Umberto Eco reflected on the idea of opera aperta his 1962 essay, and from there comes the name of an exhibition that asks the viewer to take part in closing the work, resolving the question. Does it move, or does it not move?

Eppur si muove! is the story of Galileo Galilei when he said, under his breath, after he denied before the inquisition that the earth moves, But it moves! This is the sensation of the experiment that we see today and that was named, first in the 1920s and then in the fifties and sixties, kinetic art. Leaving La Pedrera we go back to our mobile, which means “that which is not still”. The exhibition had the magic of past times.