Picasso Blue and Pink, in Paris

I have often said –not always to everyone’s agreement– that if Pablo Picasso (Malaga 1881–Mougins, Provence 1973) had died in 1904, before moving permanently to France, he would still be in all the history of art textbooks in the world, without having had his enormously creative posterior career, during which he invented Cubism, and was leader of the twentieth century Avant-garde movement, among many other things.

Pre-1901, Picasso had already created his own style: a kind of incipient, yet very vigorous (in 2901) and colourful Fauvism made his own, and later he would re-create a very personal symbolism in his Blue Period (1901-1904), in a pathetic and extraordinarily sober style which he sweetened to drift towards what is known as his Pink Period (1904-1906). After that, and having spent a brief period in Gòsol, in Berguedà, Cubism would burst forth.

If we add that before 1901 the artist had already spent around two years as one of the most talented young painters of Catalan Modernism – in fierce competition with others – we can see that over seven or eight years he had a broad career that was comparable in both quality and output with many of his contemporaries both here and abroad, since they had already credited him with an exceptional place in world painting at the beginning of the twentieth century. 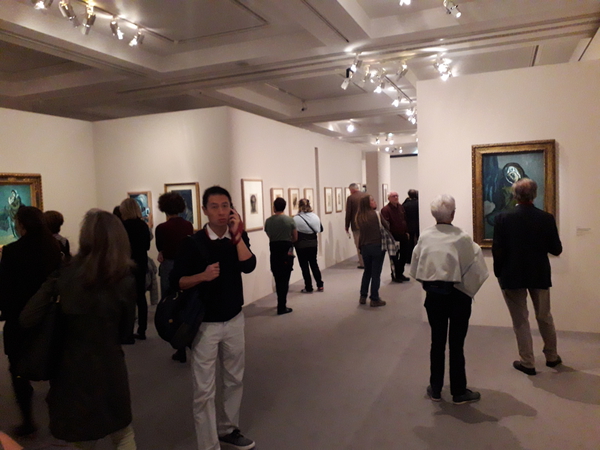 However, in Paris – at the Musée d’Orsay – there is palpable proof of my affirmation, in the exhibition Picasso bleu & rose, which opened on 18 September and can be seen until 6 January 2019. This is a completely rounded exhibition of some 280 pieces distributed in 16 rooms – all of them with their own particular meaning, and where visitors can find most of the mythical works that appear repeatedly in specialist books about Picasso at that time and in many more generalist art books covering the early twentieth century. For that reason, the number of visitors to the exhibition, which only covers five or six years of Picasso’s long artistic life, on the day I went there was huge, with some of the rooms full to bursting point.

In fact, the exhibition offers quite a bit more than its title suggests, since 70 of the pieces are prior to the Blue Period, meaning that a good part of his Catalan Period is well represented. The only works that are missing are those from his early training where he evidently showed promise but had not yet cranked up his incredibly original creative machinery.

The works exhibited are mainly by Picasso but there are also some from his immediate surroundings such as Rusiñol, Casas, S. Junyent, Nonell, Max Jacob and Apollinaire, as well as photographic, archive and printed documents related to him. Some of these works by other people are surprising, such as the magnificent oil portrait that the sponsor and advisor to the young painter made of him, posing in front of La Vie (1903, Cleveland Museum of Art), the large format oil painting that Junyent had bought from him. And I found out how they agreed to include this work – as a document but also as a work of art – because it has practically not been shown and because the painter was not a well-known name in France. The great anthologies tend to be rather clichéd, wanting to show the public what the public already knows, and looking at new things is just a nuisance.

In the exhibition, visitors have the opportunity to see a huge number of the most famous works. It hardly need mentioning that Picasso was one of those artists who didn’t follow the trends of the time but created new trends which later generated – or not – a large number of followers.

In the middle of 1901 the Picasso who could almost be described as Fauve turned to Symbolism. But not the symbolism of the pre-Raphaelites, or that of our own Riquer or Adrià Gual, but a language of his own which showed that he was thinking about Puvis de Chavannes – as was Torres-Garcia at the same time – and that he had known the works of Nabís and had allowed himself the freedom to unleash his own creativity. But he did all that without thinking about it because for a true artist the work has to come directly from their experience, pure expression, and not form any learned or preconceived theory. However, it is true that the sadness of that time affected Picasso – largely the result of the shock of Casagemas’ suicide – and made the themes that he expressed at that time in this painting serious, meditative and shadowy.

Personally, seeing once again the La Flor del Mal (Hakone, Japan, Pola Museum of Art) from that period (1902), which presided the dining room of my grandparents when I was small, or Picasso’s first sculpture, the clay figure Femme assise (Paris, Musée National Picasso), which he made in the now-disappeared family mansion in the Carrer Pàdua in Sant Gervasi de Cassoles, under the supervision of my great uncle, the sculptor Emili Fontbona, was the only justification I needed (subjective, of course) for my trip to Paris.

Afterwards, thinking about it, the Pink Period wasn’t really anything else but the optimisation of the Blue Period. Aesthetically they were very similar, but in the ‘Pink’ – also fundamentally symbolistic – the colours lost their darkness, the night turned into daybreak, and the subjects – pretexts for painting more than anything – became more amiable. They were no longer figures in contemplation, affected by possible traumas, but travelling players, with children happily engaged in their games, discreetly promising young girls, and even loving embraces, without the bright laughter and explosive liveliness of the oils in the 1901 exhibition at Can Vollard, but with the new proximity of imminent wellbeing. And that truly delicate sensibility of the figure that would burst forth later in the “neoclassical” era of the 1920s, when it seemed that the turbulence of the Avant-garde that he created himself had died down appears here some fifteen years before – in the Retrat de la senyora Canals (Barcelona, Museu Picasso) or in the Femme à l’èventail (Washington, National Gallery of Art), both from 1905, for example. Because in Picasso’s full and complex baggage, the elegance of the stroke and of the concept within, flowed when all kinds of circumstances allowed it or when his body demanded it of him.

Picasso’s aesthetic yet ever-coherent presence can be seen, for example, in his dry-point Le bain (Paris, Musée Nationale Picasso) from 1905, unmistakeably from his Pink Period even though the work is not in colour. The same work had been published as a proof in June 1911 in the emerging iconic publication Almanach dels noucentistes but only appeared later in a definitive series in 1913.

The exhibition counts on a complete team of curators, people from the D’Orsay museum but also from the Picasso Museum in Paris, but they also have the benefit of working with scientific advisor Eduard Vallès (it would be hard to find someone who knows more about Picasso as a person and about his work), as well as one of the first people to project Catalan Modernist art internationally – American specialist Marilyn McCully.

Later would come Cubism and another exhibition, also in Paris at the Centre Pompidou, is currently offering a monumental exhibition which includes an extremely extensive anthology, including Picasso, naturally, but also Braque, Gris, Gleizes, Metzinger, Léger, the Delaunays, the Duchamps, Chagall and all the others, as well as sculptures by Brancusi, Laurens and Modigliani. This exhibition runs from 17 October 2018 to 25 February 2019.