French sociology in the nineteenth century established that the “events” (not the truths) are stubborn. So, although time passes again we stumble across a “fact” that seems to have taken place around 1974 between the moralist caricaturist painter Ferran Martí Teixidor (Sabadell, 1930), and – without prior notice – Antoni Tàpies, unarguably the master of ‘Art informel’ and ‘Matter painting’.

At the time mentioned above Martí Teixidor painted in the pre-Raphaelite symbolist style, under the inscription Glory to the acute sensitivity of Antònia Muro and her shat-on knickers and in caricature, a pseudo-portrait of a haloed Antoni Tàpies, dressed as Christ (or rather the “Virgin”, iconically) with the blue shawl wrapped round him (in the style of the Gothic virgin), which covered a red robe belted with a penitential cord. The cloak shrouds, warms, connects a series of stupified fools who, smiling and grateful, look admiringly at their protector. 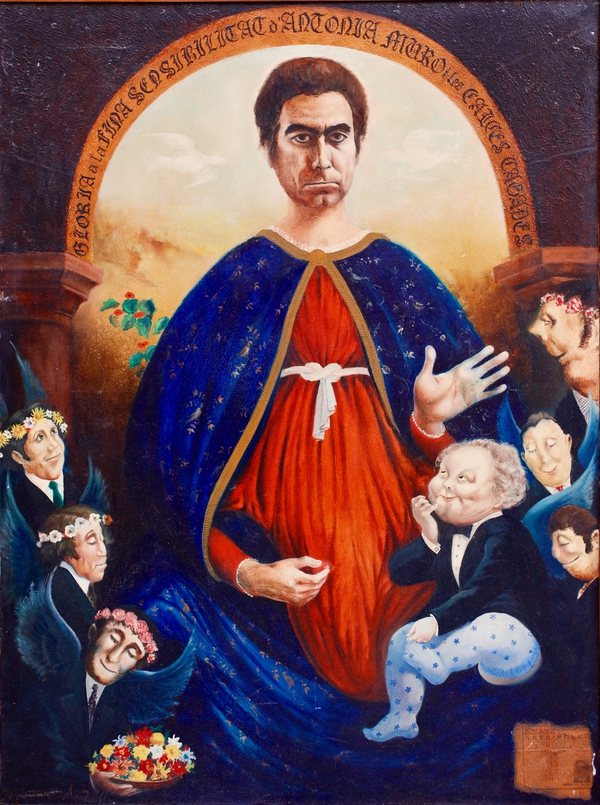 This is the iconicity of the painting. In the lower right part, glued to the canvas, there is a cutting from the newspaper “El Ciero” with illegible but visible text, under the general heading of Cruz y Raya. It is by Manuel Vela Jimémez, and the title of the printed text reads: Arte Pobre. A previous photograph of all this was found in the desk of the Rafael Santos Torroella, art critic for the “Noticiero Universal”. The same year, Tàpies published L’Art contra l’Estètica, (action against the rule; he had previously published La pràctica de l’art, where he also promoted action). All in all, it was an argument against figurative art, understood as an anachronistic and regressive expression of the bourgeoisie. The facts were a kind of summary which more or les showed Tàpies, already recognised and celebrated as a great Informalist painter who, in part, owed his international success to the need for an exterior liberal image of the Franco regime, propitiated by the curator Luís González Robles. M. Infiesta, the creator of the Museum of Realist Art (MEAM), in Barcelona, commenting on the art of Martí Teixidor, has recently affirmed this.

Up to here we have the facts. Now we will see the sense and meaning of all this. On the face of it, they affirm that society is not a clear, transparent, intercommunicated and flexible thing, but quite the opposite: obscure, compartmentalised, sclerotic, cheating and, above, all, immoral, lying outside every rule and principle that was not the sacrosanct principle of private property (up to now, untouchable worldwide).

Looking back, but still relevant today, what Martí Teixidor (who had received the Wagner Prize in 1955, awarded in the [reconstructed] city of Dresden) seems to be saying is that in the case of Tàpies as an Informalist, art had lost its justification in the moral consciousness, as seen in the work of Hogarth, Goya, and Daumier, who used drawing and painting to “represent the Passions, and through the Epidermis, evoke the interior Soul” (Mitchell, 1731), … “while I describe them you would paint their features: you would do ithem so like you saw thenm that I assure you you would not have to make a caricature; you shape them such that just looking at the face you can see the soul” (Swift, 1736), … “it is said that the best praise you can offer a painter is to say that his figures seem to be breathing; then it is even better praise to say they seem to be thinking” (Fielding, 1742). ith the obvious addition of the thesis on the physiognomy and representation of Lavater (1780). I offer all these contributions in an attempt to say that Martí Teixidor, through a painting of the academic (or not academic) concept of “otherness”, through (albeit invented and personal) stereotypes of the ways of another contemporary Catalan painter,  Ramon Calsina, and Riu Serra, or the abovementioned English, Aragonese or French, shows that art can be made, not for popular consumption like the  Dutch Teniers or the artistic Costumbrismo of Andalusia at the end of the nineteenth century, but as art that is snagged on the hook of comic  deformation and sarcastic cynicism and ridicule, without abandoning, however, the executive licence of surrealism (this could justify the part of the allusive border in one of Dalí’s painting where there is a figure with shat-on pants). The art that Martí Teixidor proposes is like a medicine for the soul – Tàpies also wanted it for the body, under the influence and acceptance of Orientalism. Martí criticises what he believes is the anaesthesia with which contemporary art has steered reality. (At the end of Francoism, Cirici even said that the art of Tàpies was equivalent to the figurative emblem of the annihilation of reality). It would seem that the only person to be let off was Francis Bacon.

It is strange how things turn full circle, however. If you want to interpret the criticism of Tàpies and his “coryphes”, now it seems that Martí Teixidor – who has also had his own dealers and buyers – in another criticism of the painter Manzoni and his “artistic shit”, blames the abstract artists (all forming everything that is negative for a healthy moral culture) for a counterculture driven by perverse and perverted instructors. Art would become a panacea either for salvation or death. The fact is when one wants to cure the body and the other wants to save the soul.

It seems to me as if the world has turned on its head: where the good are the bad and the false, depending on your perspective. Here, Costumbrismo is brushing up against moralism to become a satire of social behaviour.

Just thinking about who could be the seven “coryphes” that come under the umbrella of the Informalism of the Great Master, they could be the “seven” of the “Set” del Dau; if anyone sees any others, they could be René Metras, Lluís Maria Riera or anyone else close to them.

However, the aforementioned founder of the MEAC has said of the art of Martí Teixidor – and rightly in my opinion – that it has the morality and imagery that would is seen in the novel and the film “Lord of the Rings”.

For the moment this observation and reflection is an invitation to reconsider the role of art in the present day as a whole. In such a controversial society the “roles” of anything could be “those of a cartoon strip”.